Poyas sold goods to a diverse range of customers in South Carolina, but the overwhelming majority were planters. These elite patrons could expect to find a large selection of British manufactured items for sale at his store including wool and linen textiles, iron tools, paper, chinaware, and glass. Hard currency circulated in South Carolina at a premium, so planters often paid off their debts in cash or commodities once the harvest was completed in the fall. In addition to currency, Poyas accepted payments in the form of shingles, deerskins, indigo, and rice, which he then traded back to England and other parts of the Atlantic World. 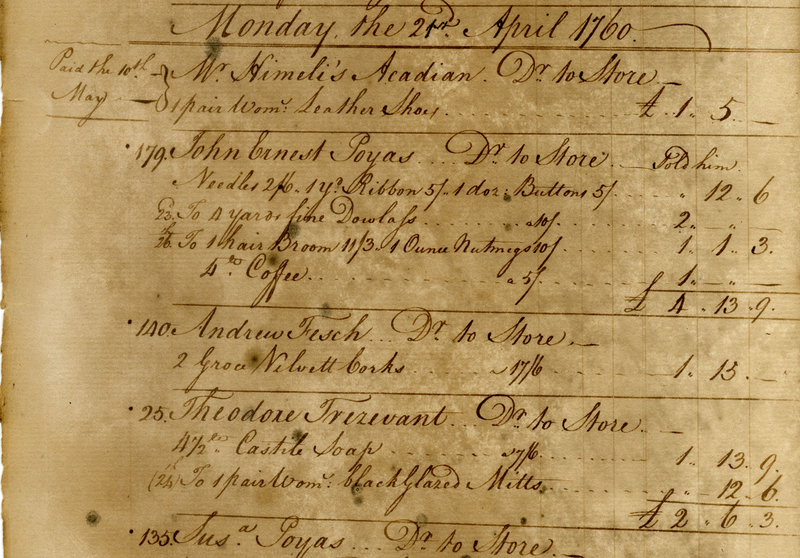 Selection from ledger entries for Monday, the 15th of April through Tuesday, the 22nd of April, 1760, Charles Town, South Carolina, The James Poyas Daybook Collection, Lowcountry Digital Library, courtesy of the Charleston Museum Archives. Theodore Trezevant, listed in the ledger above, was a frequent customer of Poyas, and was one of the many Huguenot planters he served. At the top of the page, an entry for a different customer, Reverend Himeli, indicates the purchase of a pair of shoes by "Himeli’s Acadian." In the winter of 1755-56, 2,000 Acadian refugees arrived in Charles Town from Canada. Many families were separated, and this entry indicates that Himeli took in at least one Acadian refugee.

Many of the regular Lowcountry planters listed in the Poyas Daybook were descendants of Huguenot refugees who migrated to the South Carolina Lowcountry in significant numbers in the late seventeenth century. After decades of harassment and religious persecution in France, approximately five hundred Huguenots, or French Calvinists, settled in South Carolina. Poyas’s most active customers included members of the Horry family: Daniel, Daniel Jr., Elias, and John. The Horrys were Huguenot planters who owned thousands of acres along the Santee and Black Rivers, as well as hundreds of enslaved Africans who cultivated indigo and rice. Other Huguenot customers included members of the Trezevant, Gaillard, Rembert, Cahusac, Huger, Michaux, Mouzon, and DuPont families. Many of these families built their homes in the parishes of St. James Santee, St. Stephens, and St. John’s Berkeley. 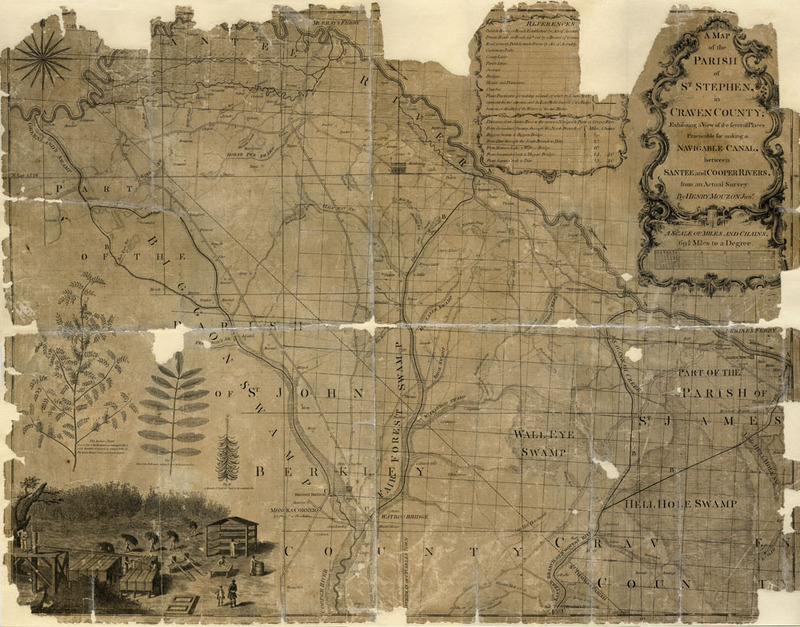 “A map of the parish of St. Stephen, in Craven County,” surveyed by Henry Mouzon, South Carolina, 1773, courtesy of the South Carolina Historical Society. Planters from the parishes of St. Stephen and St. James, visible in the map above, were important customers for Poyas's mercantile business. Located on the Santee River, these parishes provided an ideal environment for rice and indigo plantations.

The prevalence of Huguenot customers in the Poyas Daybook is striking. His personal relationships with French customers in Charles Town may have led to these commercial ties, but Poyas’s backcountry connections could have also been beneficial. The Purrysburg settlement where Poyas lived before Charles Town featured a diverse range of European immigrants. The Poyas family also originated from the Italian Piedmont, a region that shared borders with France and Switzerland. Poyas’s familiarity with the French language would have connected him to an expansive multi-lingual European customer network that overlapped with the colony’s Anglophone population in the mid-eighteenth century.