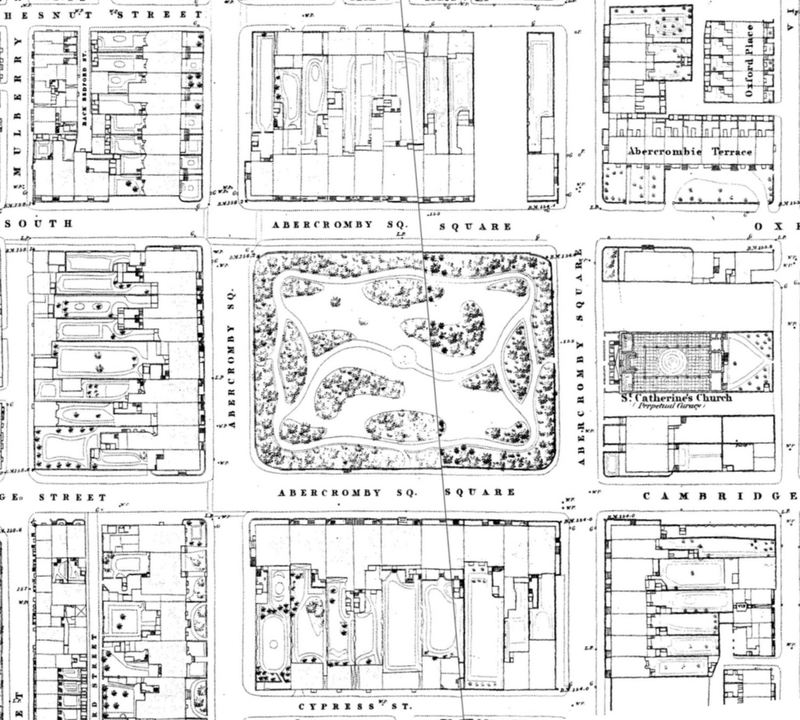 The biographies below detail the social, political and economics relationships of some of the most influential residents of Abercromby Square during and after the American Civil War. The lives and work of these residents reveal the range of political views held by Liverpool’s elite during the war, and provide insight into their various business connections to the US Civil War and its aftermath.

Harriet Littledale
4 Abercromby Square, Resident from 1827 to 1832
Members of the Littledale family were part owners of the Preston & Fawcett Engineering Co., along with their neighbor Robert Preston. While they occupied the Square only as tenants in its initial years, the family served as landlords to several of the properties throughout the nineteenth century, and remained a significant presence in the Southern Club. Cotton brokers Thomas and Harold Littledale were also members of the family, and worked with Prioleau to promote support for the South.

Robertson, Robert, and Adam Gladstone
7, 11, 24 Abercromby Square and 90 Chatham Street, Residents in the 1850s
The family of the future Prime Minister William Gladstone were influential residents of Abercromby Square. The Gladstone family owned several properties in the neighborhood, and after relocating to their various estates in the 1850s, the family retained close connections to some of their former neighbors. Before abolition, the Gladstone family business also included large plantations worked through enslaved labor in the British West Indies, and these trans-Atlantic links were fundamental to their wealth. While he was later known as an abolitionist, Gladstone initially argued for improving the treatment of enslaved people rather than the removal of the institution of slavery. He also followed the lead of his father and his brother by taking a pro-southern stance during the Civil War. He served as Chancellor of the Exchequer throughout the conflict, and in October 1862, gave a speech in Newcastle, England, acknowledging the case for southern independence, claiming, “… they have made a nation.” This statement embarrassed the British government by going against the national political stance of neutrality. Gladstone subsequently regretted making the speech, and later became a vocal supporter of abolition.

Elias Arnaud
13 Abercromby Square, Resident from 1837 to 1860
Elias Arnaud was the chief customs and excise officer for Liverpool for many years, becoming rich on the oversight of imports, exports, and dock duties. He died shortly before the outbreak of hostilities, but his network of customs officers continued to be influential throughout the Civil War. When the North challenged the building of the “Laird Rams” and blockade runners for the South, the customs officers of Liverpool were charged with inspecting the ships prior to export. Since there were no armaments in place, they were declared commercial vessels. The sympathy of Liverpool customs officers to the Confederate cause was a prime reason that the CSS Alabama and other blockade-runners were manufactured in or near Liverpool, and could be delivered to the South as commercial vessels. Arnaud’s widow continued to reside in the Square throughout the Civil War.

Robert Preston
10 Abercromby Square, Resident from 1852 to 1864
Robert Preston was chairman and chief engineer of the Preston & Fawcett Engineering Co. During the first half of the nineteenth century, Preston’s company established a substantial trade network with the former British colonies through patents, productions, and exports—first with sugar refining machinery, and then with cotton processing machinery. In 1838, his company built the first Liverpool-New York steamer to cross the Atlantic Ocean regularly. Preston & Fawcett had significant trade relations with the U.S. South prior to the war, in engineering and in sugar refining. The company sold arms to the Confederacy (and to the North) throughout the conflict, including the armaments of most of the Liverpool built blockade-runners.

James Spence
10 Abercromby Square, Resident from 1864 to 1873
James Spence moved into Number 10 Abercromby Square during the course of the Civil War, after he bought the property from Robert Preston. A British tin and metal merchant closely connected with the southern cause, Spence was also a highly effective Confederate propagandist. Playing on the fears of wealthy Britons, he wrote numerous letters to newspapers as well as two bestselling books, The American Union; Its effect on National Character and Policy with an inquiry into Secession as a Constitutional Right and the causes of the disruption (1861), and On the Recognition of the Southern Confederation (1862). Through these publications, Spence tried to sway public opinion in support of the Confederacy, highlighting Britain’s supposedly “natural” links with the South, and its rivalry with the North. As a supporter of abolition, Spence simultaneously attempted to minimize the significance of slavery to the southern cause in his work.

Spence was also involved in the transfer of funds and the debate over the Erlanger Loan—an attempt made in 1863 to market Confederate bonds backed by cotton through the French banking house of Emile Erlanger & Co. Confederate diplomat John Slidell later dismissed Spence for his failure to effectively support slavery. However, Spence continued his involvement with the Confederacy, and led the arrangements for the Grand Bazaar in Liverpool in 1864. He also personally contributed money for the education of Jefferson Davis’s children, in Canada and subsequently in Liverpool, after the end of the Civil War.

Spence’s close connections to Charles Prioleau may have first arisen through his wife, Mary Anne le Serre, who, like Prioleau, came from an American-born Huguenot background. Spence’s father had also been a plantation owner in Jamaica, and had freed his own slaves without compensation prior to the legal requirement for emancipation. This led to disastrous financial consequences for Spence's family, which may have influenced Spence's complex views on abolition.

Thomas Hunter Holderness
11 Abercromby Square, Resident from 1859 to 1876
To assist with blockade running during the Civil War, Abercromby Square resident Thomas Hunter Holderness took out several patents for the improvement of propelling navigable vessels and the construction of metal, wood, and iron ships. As new shallow draft blockade runners were being designed, the Liverpool shipbuilders wanted to ensure that any advances in shipping design were firmly protected by the law, whether they were used by the North or the South.

Charles K. Prioleau
19 Abercromby Square, Resident from 1862 to 1870
Charles Prioleau, a wealthy financier and trader from Charleston, South Carolina, first constructed a Georgian-style house at this site in 1862 as the Square’s centerpiece. Some evidence suggests that the members of the Southern Club originally intended this building to be an unofficial embassy in Liverpool for the Confederacy, as a base for business and diplomacy. According to a contemporary account, Number 19 was specially designed to be a European White House for Jefferson Davis. Charles Kuhn Prioleau is not a particularly well-known name in general histories of the Civil War, but he was perhaps the most influential supporter of the Confederacy in Britain. He was the sole British partner and representative of Fraser, Trenholm, & Co., the unofficial bankers to the Confederacy in Europe, and helped supply the South with arms throughout the war.

Norman Walker
19 Abercromby Square, Resident from 1870 to 1877
Major Norman Walker, a Virginian by birth, had been an agent of the South in Bermuda, where Fraser, Trenholm, & Co. also operated. He and his wife, Georgina Gholsen Walker, entertained many individuals connected to blockade running, and Walker himself was involved in trans-Atlantic efforts to raise funds and obtain armaments from Europe and Liverpool. Walker visited Liverpool numerous times, bringing Confederate cotton bonds to Prioleau, and helping to arrange arms shipments. After the war, Walker set up an import-export business in Liverpool with his father-in-law Thomas S. Gholsen. His wife Georgina was a close personal friend of Varina Davis, wife of the former Confederate President. As a plantation owner and commodity trader on the trans-Atlantic market, supporting slavery was fundamental for the Walkers. Georgina’s diaries reveal that the Walkers hosted the Davises on several visits to Liverpool in the years following the war, between 1867 and 1874.

Charles and Lewin Mozley
20 Abercromby Square, Residents from 1843 to 1857
Despite the neutrality of the British government during the Civil War, the local government in Liverpool was decidedly pro-Confederate. Several mayors had commercial and historical ties to the southern states, as the post-holders frequently came from established merchant families of the town. Lewin and Charles Mozley came from a prominent Jewish family of businessmen with historical involvement in the trans-Atlantic slave trade. The brothers were also successful bankers and businessmen, working for Israel Barned and Co., a bank that specialized in loaning money to shipping, cotton, and timber firms. Lewin Mozley even purchased the plot of land at Number 19 Abercromby Square on behalf of Charles Prioleau in 1862. Powerful in local politics, Charles Mozley became the first Jewish mayor of Liverpool in 1863, and helped sway local opinion towards the southern cause, encouraging the Confederate sourcing of ships on the River Mersey.

Alfred Chapman
23 Abercromby Square, Resident from 1875 to 1885
Alfred Chapman was the chief engineer of the Preston & Fawcett Engineering Co. that provided arms to the Confederacy throughout the Civil War. Chapman became the inventor of many engineering patents for this company. Mostly based overseas during the war years, he would have been a regular visitor to his chairman and chief engineer, Robert Preston. 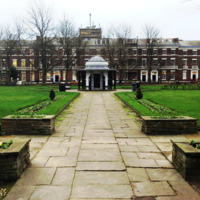 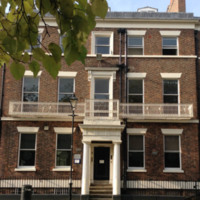 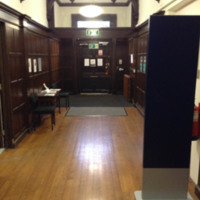 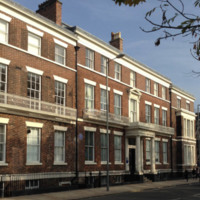 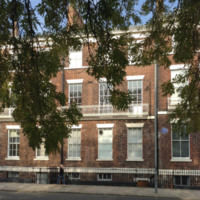 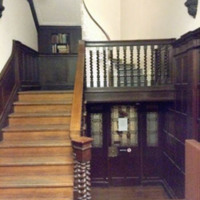 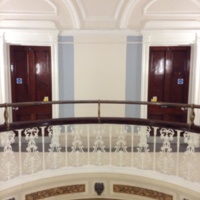 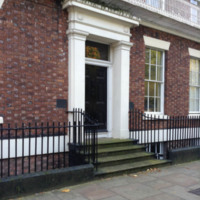 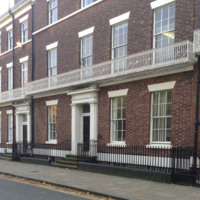 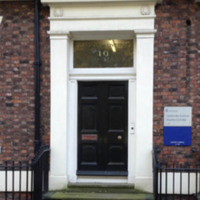 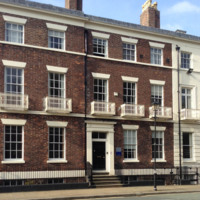 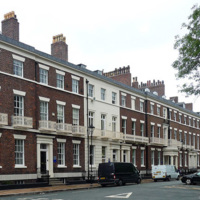