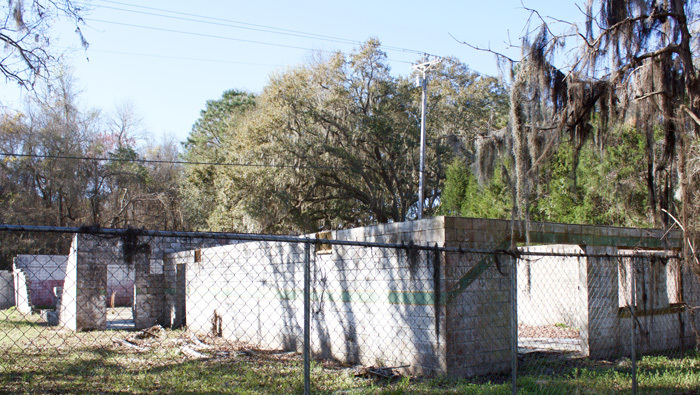 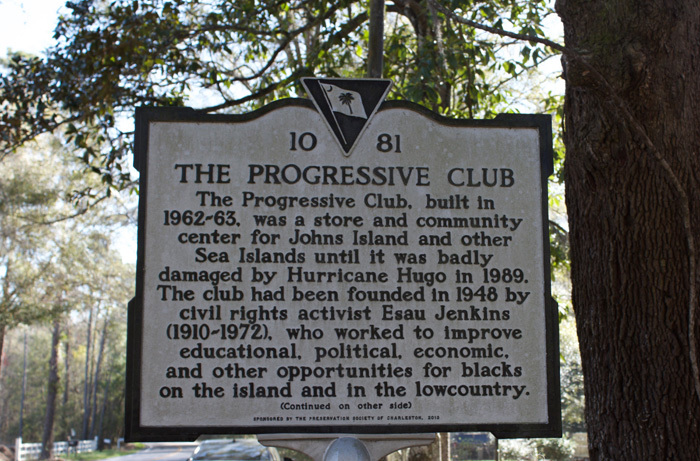 A visit to the site of the Progressive Club on Johns Island is critical for discussing Clark’s work and the local and national significance of Lowcountry African American civil rights activism. After Clark graduated from the Avery Normal Institute in 1916, and had to leave Charleston to find work due to the ordinance against black teachers in the city’s public schools, she taught at the Promise Land School on Johns Island. Her time working here exposed her to the rich Gullah Geechee culture of black Johns Islanders, and taught her about their needs and concerns as a rural community. As she became more active in the civil rights movement in the 1950s, Clark also extended her civic activism in Charleston to Johns Island. As leader of her Alpha Kappa Alpha sorority chapter, for example, she organized a diphtheria immunization clinic for local Johns Island children. She further built on these community connections to help organize the first Citizenship School at the Progressive Club in 1957. 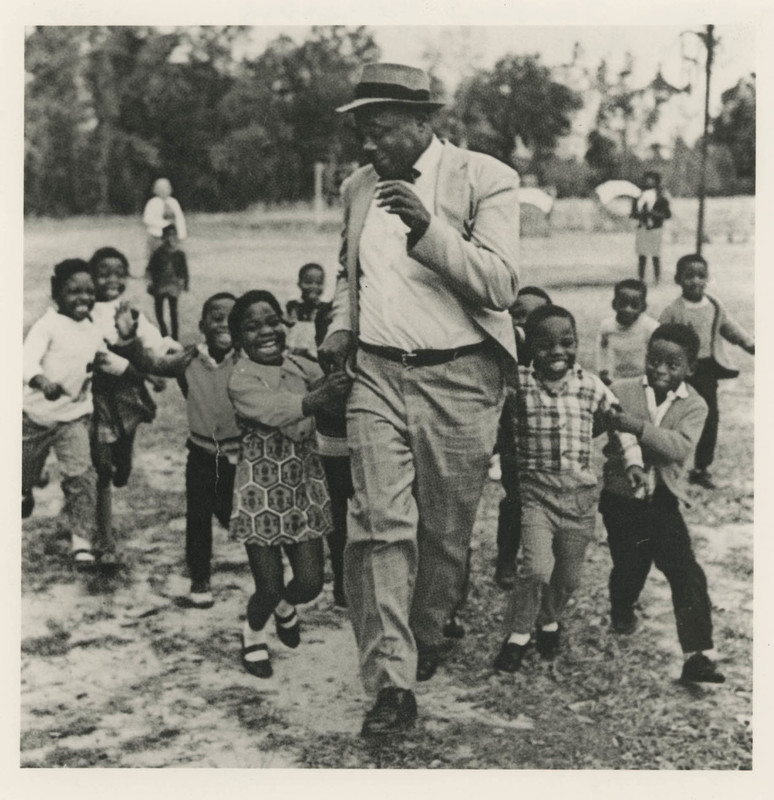 Johns Island leader Esau Jenkins had established the Progressive Club in 1948 as a space to address racial injustices and civil rights issues in his local community. His interest in organizing began after multiple incidents of black men on Johns Island being shot by white men in the late 1930s and early 1940s, with no response from authorities. Jenkins initially founded the club with other black leaders to secure legal aid for victims of racial violence and their families.

Jenkins also drove a bus for African American Johns Islanders who needed to travel to downtown Charleston for school or work. Once federal Judge Waring opened the Democratic Primary to black voters, Jenkins used these bus rides as an opportunity to teach his riders about voter registration. He typed up copies of state laws pertaining to voter registration and distributed them to his passengers. Between stops, Jenkins also reviewed sections and discussed their meanings with those who could not read.

In 1954, just two months after the Supreme Court’s Brown v. Board decision, Septima P. Clark visited the Highlander Folk School in Monteagle, Tennessee, for the first time to attend a workshop on school integration. This unique school for adults, founded in 1932, based its philosophy on cooperative problem solving. Director Myles Horton and his staff began with the assumption that “oppressed people know the answers to their own problems” and developed workshops to discover those answers through participants’ own experiences. Highlander was also one of the only places in the South where black and white activists could meet as equals—which triggered some locals and political leaders to label it as a “Communist training school.” 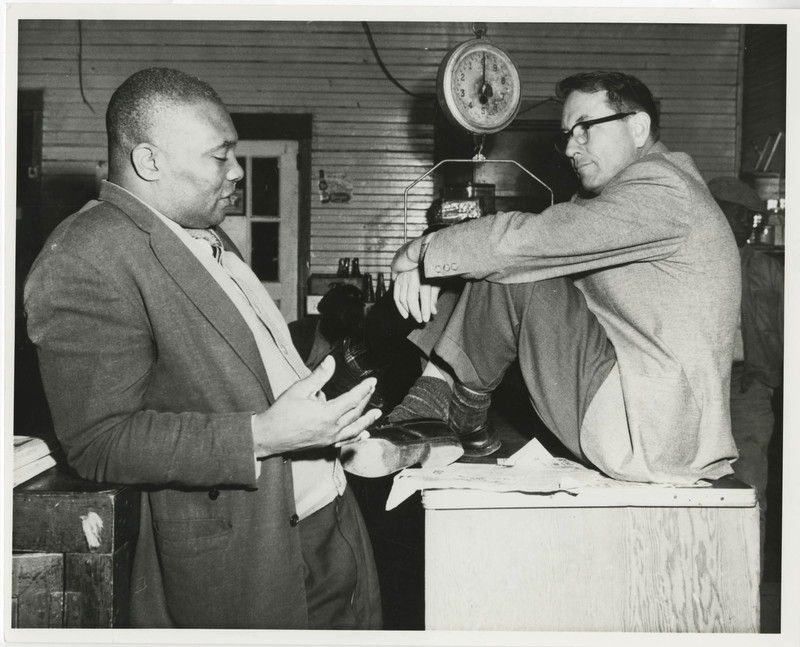 Esau Jenkins and Myles Horton, Charleston, South Carolina, Esau Jenkins Papers, courtesy of the Avery Research Center. Septima P. Clark worked with both Jenkins (a South Carolina activist) and Horton (the director of the Highlander Folk School) to aid in the development of social justice and adult education programs across the South.

When Clark returned to the Lowcountry from Monteagle, she talked to Johns Island leaders about how the Highlander School could help them achieve their activist goals. At the end of his first visit to Highlander, Jenkins announced his intent to run for the local school board. “Not that there is any hope of getting elected,” he admitted, but because “I want to prove that a Negro can run for office and not get killed.” Jenkins became a stalwart supporter of Highlander.

In the meantime, Septima Clark also facilitated the first visit by Myles Horton and the Highlander staff to Johns Island. Most significantly, once she went to work at Highlander full-time in 1956, Clark worked with Jenkins, Horton, and her cousin Bernice Robinson to launch the first Citizenship School class on Johns Island in January 1957. Robinson, who worked as a beautician in Charleston, began her first class by asking her students what they wanted to learn, and tailored the curriculum to address these local needs while also preparing them to become registered voters. Classes met two nights a week for six weeks, and at the end of the session eight of the fourteen adult students successfully registered to vote.

News of the Citizenship School on Johns Island spread quickly, and soon local leaders organized additional classes on Wadmalaw and Edisto Islands, as well as in North Charleston. Ethel Grimball, Esau Jenkins’s daughter, and Aileen Brewer also taught on Wadmalaw and Edisto Islands, respectively. In addition, Robinson taught a class in North Charleston, in the beauty shop of her friend Mary Davis who had also attended a Highlander workshop. 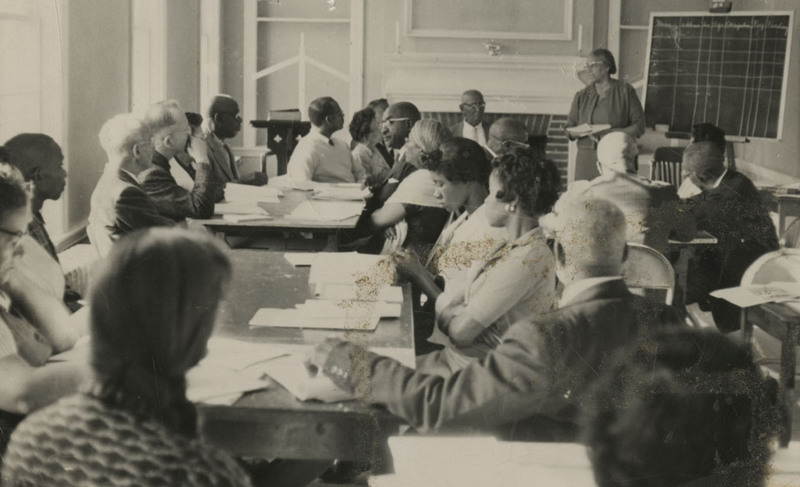 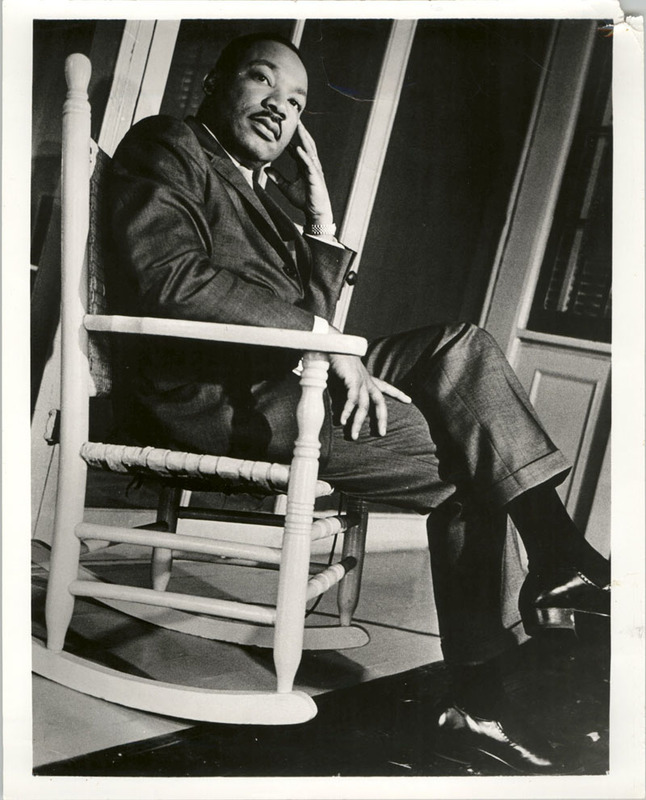 In 1961, state government leaders in Tennessee forced Highlander to transfer the Citizenship School program to the Southern Christian Leadership Conference (SCLC). Because SCLC had affiliates across the South, the reach of the Citizenship Schools expanded dramatically. Clark and Robinson, along with Dorothy Cotton and Andrew Young of the SCLC, conducted weeklong workshops at the Dorchester Center in Liberty County, Georgia to train teachers, primarily women. They also traveled to local communities to assist these new teachers and to help organize local civil rights protests. According to Young, the Citizenship Schools “really became a foundation for Martin Luther King’s non-violent movement,” with graduates playing “a very strong role” in most of SCLC’s campaigns. Most critically, the schools not only taught African Americans to register to vote, but also to use the power of the ballot and their new literacy skills to establish and access services—ranging from health care and child care to managing property and finances—all to benefit their families and communities.

Today, national narratives of the twentieth century civil rights movement make it appear as though collective activism emerged spontaneously, in response to one isolated incident, injustice, or inspiring speech. Acknowledging the empowering grassroots educational preparation behind the movement illuminates how local people gained knowledge, practical skills, and courage to act. Ongoing struggles against social injustice throughout the United States indicate that the educational work of Septima Clark still has much to teach future generations. 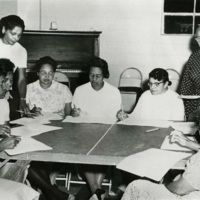 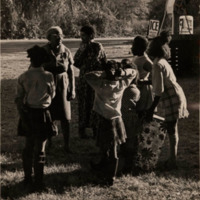 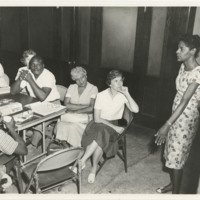 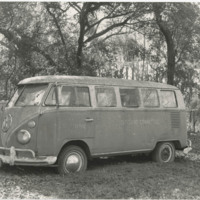