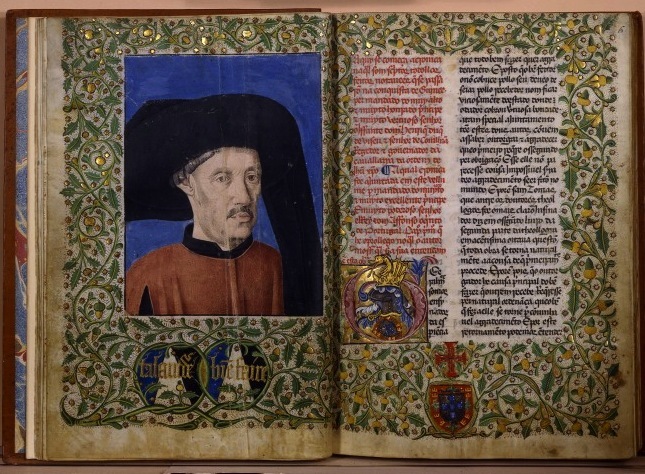 Cover of Crónica dos feitos da Guiné by Gomes Eanes de Zurara, published in 1460, Paris, France, courtesy of the Bibliothèque nationale de France. King Alfonso V commissioned the Crónica, which was first composed by Zurara in 1453. This chronicle documents the early development of Portuguese interests in large-scale slave trafficking out of West Africa.

With Portugal’s expansion into western Africa in the fifteenth century, Iberian merchants began to recognize the economic potential of a large-scale slave trafficking enterprise. One of the first to record this sentiment, according to Portuguese royal chronicler Gomes Eanes de Zurara, was a young ship captain named Antam Gonçalvez, who sailed to West Africa in 1441 hoping to acquire seal skins and oil. After obtaining his cargo, Gonçalvez called a meeting of the twenty-one sailors who accompanied him and unveiled his plan to increase their profits. According to Zurara, Gonçalvez told his crew, “we have already got our cargo, but how fair a thing would it be if we, who have come to this land for a cargo of such petty merchandise, were to meet with good fortune and bring the first captives before the presence of our Prince?” That night, Gonçalvez led a raiding party into Cap Blanc, a narrow peninsula between Western Sahara and Mauritania, and kidnapped two Berbers, one man and one woman. Another Portuguese mariner, Nuno Tristão, and members of his crew soon joined Gonçalvez. Although the raid resulted in less than a dozen captives, Zurara imagines in his account that prince Henry of Portugal responded to this enterprise with, “joy, not so much for the number of captives taken, but for prospect of other [countless] captives that could be taken.”

While Gonçalvez’s voyage in 1441 is widely considered to mark the beginnings of the trans-Atlantic slave trade, it may also be viewed as an extension of an older tradition of raiding and ransom on both shores of the Mediterranean. Upon returning to Portugal, Gonçalvez treated his captives in accordance with this custom, and allowed them to negotiate the terms of their release. Rather than offering a ransom of money, the captives promised to give Gonçalvez ten slaves in exchange for their own freedom and safe passage home. According to royal chronicler Zurara, the Berbers explained that these new captives would be “black [and] not of the lineage of Moors, but Gentiles.” Thus in 1442, Gonçalvez returned his Berber captives to Western Sahara, receiving as payment ten enslaved sub-Saharan Africans, whom he then transported back to Portugal for re-sale.

Fifteenth-century Iberian legal traditions regulated Christians’ treatment of Jews, Muslims, and other Christians, clearly delineating, for example, who was enslaveable and who was not. In contrast, the juridical status of people who did not fit these categories was more ambiguous. Legal and philosophical arguments to address this issue began to evolve during the second half of the fifteenth century, once Portuguese mariners began to return to Iberia with captives acquired in West Africa and West Central Africa. Notably, the treatment of “black Gentiles” was addressed in 1452 and 1455, when Pope Nicolas V issued a series of papal bulls that granted Portugal the right to enslave sub-Saharan Africans. Church leaders argued that slavery served as a natural deterrent and Christianizing influence to “barbarous” behavior among pagans. Using this logic, the Pope issued a mandate to the Portuguese king, Alfonso V, and instructed him:

. . . to invade, search out, capture, vanquish, and subdue all Saracens and  pagans whatsoever …[and] to reduce their persons to perpetual slavery, and to apply and appropriate to himself and his successors the kingdoms, dukedoms, counties, principalities, dominions, possessions, and goods, and to convert them to his and their use and profit . . . 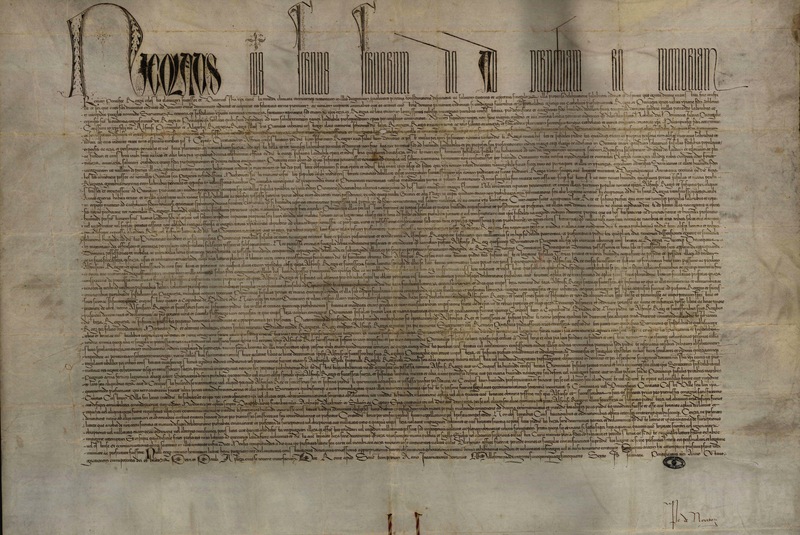 Romanus pontifex, papal bull of Pope Nicolas V, Portugal, 8 January 1455, courtesy of the Arqivo Nacional da Torre do Tombo, Lisbon, Portugal. This papal bull legally granted Portugal the right to enslave any and all people they encounter south of Cape Bojador, on the coast of Western Sahara. About midway through the bull, the Pope declares all Sub-Saharan Africans henceforth be held in perpetual slavery.

We [therefore] weighing all and singular the premises with due meditation, and noting that since we had formerly by other letters of ours granted among other things free and ample faculty to the aforesaid King Alfonso—to invade, search out, capture, vanquish, and subdue all Saracens and pagans whatsoever, and other enemies of Christ wheresoever placed, and the kingdoms, dukedoms, principalities, dominions, possessions, and all movable and immovable goods whatsoever held and possessed by them and to reduce their persons to perpetual slavery.

[Translation from Davenport, Frances Gardiner. Ed. European Treaties bearing on the History of the United States and its Dependencies to 1648. Carnegie Institution of Washington, Washington, D.C.: 1917, p. 23.]

Though the papal bull mentions “invading” and “vanquishing” African peoples, no European nation was willing or able to put an army in western Africa until the Portuguese colonization of Angola more than a century later (and even then, Portuguese forces received extensive aid from armies of Imbangala or “Jaga” mercenaries). Early raids such as the one made by Gonçalvez and Tristão in 1441 were unusual, and may have only been possible because the Portuguese had never previously raided south of Cape Bojador. Portuguese mariners soon learned that inhabitants along the Upper Guinea coast were more than capable of defending themselves from such incursions. Not long after his 1441 voyage, Tristão and most of his crew were killed off the coast of present-day Senegal.

Prior to the colonization of Angola, Portuguese colonies and commercial hubs in Africa were generally established on islands that had previously been uninhabited. Meanwhile, feitorias on the mainland depended largely on maintaining good relations with local populations. Thus in addition to justifying the enslavement of Muslims and other non-Christian peoples—including an increasingly important population of sub-Saharan Africans and their descendants—within the Iberian world, this legislation essentially authorized Portuguese colonists and merchants overseas to acquire enslaved Africans through commerce, drawing on pre-existing markets and trade routes.

As the 1455 bull indicates, at first the Church officially limited African slave trading to Alfonso of Portugal. Regardless, other European groups soon followed. During the late fifteenth and sixteenth centuries, French and English mariners occasionally attempted to raid or trade with Portuguese settlements and autonomous African communities. During the War of the Castilian Succession (1475-1479), the Spanish faction supporting Isabel—future Queen Isabel of Castile—directly challenged Portuguese claims in western Africa, sending large fleets to raid the Cape Verde Islands and conduct trade near Elmina. Despite Castile’s formal recognition of Portuguese interests in western Africa, stipulated in the treaties of Alcáçovas (1479) and Tordesillas (1494), voyages organized in Andalucia and the Canary Islands continued to visit African ports.

The Papal Bull of 1455 justified the expansion of (black) African slavery within early Iberian colonies, and the acquisition of more African captives and territory, but the same decree also provided a legal framework for sub-Saharan Africans to negotiate with Iberian authorities on equal footing, and to make claims of their own, should they convert to Christianity. Perhaps the best-known example of this form of negotiation is found in the Kingdom of Kongo in West Central Africa. During the late fifteenth and early sixteenth centuries, Kongolese political elites adopted Christianity and sent emissaries to Europe. In the 1520s, Kongo’s Christian ruler used diplomatic pressure based on his religious status to try to limit the Portuguese slave trade from Kongo.