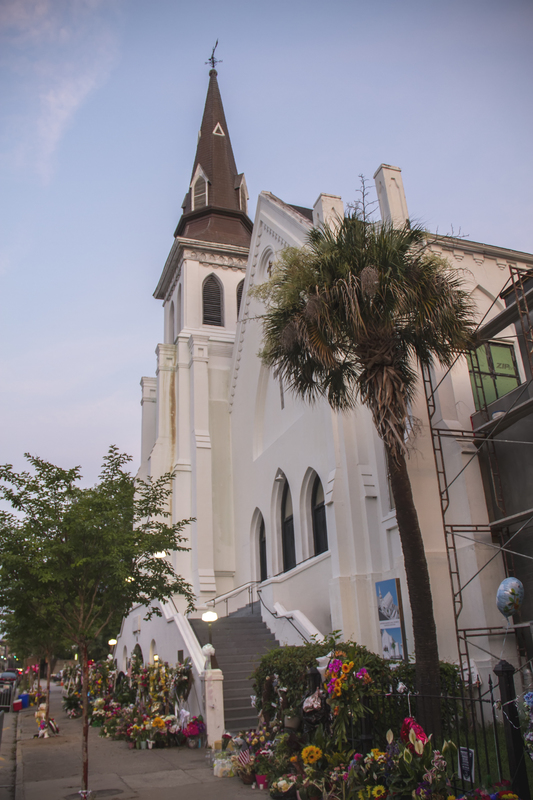 On Wednesday, June 17th, 2015, a regular evening Bible study met at the Emanuel African Methodist Episcopal (AME) Church in downtown Charleston, South Carolina. Twelve church members attended, including Emanuel AME’s pastor and South Carolina State Senator Reverend Clementa Pinckney. That evening, a young white man named Dylann Roof also joined the Bible study. They welcomed the stranger and began discussing the parable of the sower in the Gospel of Mark. According to witnesses, Roof listened for nearly an hour, until everyone bowed their heads for a closing prayer. At that time, Roof reportedly pulled out a gun, made racially derogatory remarks to the gathering of African American church members, and began shooting.

Around 9:00 p.m., the Charleston Police Department responded to reports of a mass shooting at the Emanuel AME Church. They found eight members of the Bible study group dead at the scene; the ninth victim died in the hospital. Roof fled the scene, but police captured and arrested him the next morning in Shelby, North Carolina. On June 18th, the local media released the names of the nine victims killed during the tragic shooting: Sharonda Coleman Singleton, Cynthia Graham Hurd, Susie Jackson, Ethel Lance, DePayne Middleton Doctor, Clementa Pinckney, Tywanza Sanders, Daniel Simmons Sr., and Myra Thompson. Two adults from the Bible study survived the attack, Polly Sheppard and Felicia Sanders (mother of Tywanza Sanders and niece of Susie Jackson). A child in the room also survived, but the media did not release her name at the request of her family. Reverend Pinckney’s wife, Jennifer, and their young daughter, hid in his adjoining office during the shooting.

City officials quickly described the massacre as a hate crime. In addition to targeting Black Americans, Roof had attacked a historically significant church known as “Mother Emanuel.” This church hosts one of the oldest AME congregations in the U.S. South. From its founding in 1816 during slavery, through the twentieth century civil rights movement, and into the present, Mother Emanuel’s two hundred year long history demonstrates a powerful legacy of faith, community, and resistance to racial injustice and oppression in Charleston. Roof claimed that he hoped to start a “race war” through his violent attack at this prominent church. 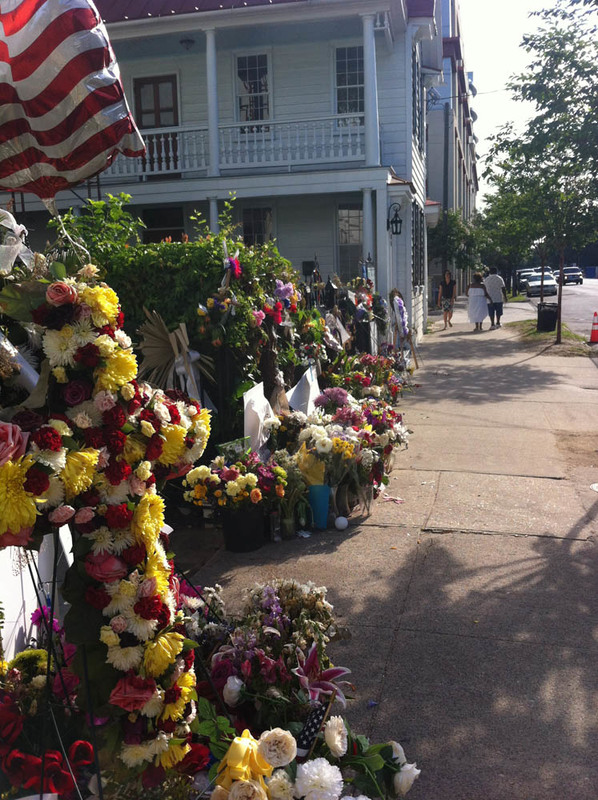 Items left in front of the Emanuel AME Church, photograph by Meg Moughan, July 7, 2015, Charleston, South Carolina. In the days, weeks, and months after the shooting on June 17th, 2015, visitors left vast amounts of memorabilia outside of Mother Emanuel. In response, the church formed the Memorabilia Sub-Committee with various local organizations to coordinate volunteers to help move sensitive items into climate-controlled storage.

Instead, in the aftermath of the shooting, Mother Emanuel received an overwhelming outpouring of support. Thousands of individuals across the nation participated in prayer vigils and reached out to express their anguish over the tragic event. Letters, flowers, candles, artwork, posters full of signatures and comments, and countless other memorabilia items quickly appeared in front of the church. Visitors from across the globe came to express their condolences. On June 26th, United States President Barack Obama even flew to Charleston to deliver the eulogy for Reverend Pinckney’s funeral. This homegoing service was just one of the nine funerals that took place for the victims from June 25th to 29th. In front of an audience of over five thousand people at the College of Charleston's TD Arena, as well as a live national television audience, President Obama declared at that the attack at Mother Emanuel was more than a singular event. Instead, Roof's actions stemmed from a long history of racial violence in the United States — a legacy that Emanuel AME’s leaders, including Reverend Pinckney, fought against. “It would be a betrayal of everything Reverend Pinckney stood for,” President Obama asserted during the eulogy, “if we allowed ourselves to slip into a comfortable silence again."

In the days and weeks following the attack, many individuals and organizations participated in rallies and marches to protest the ideologies of white supremacy and racial bigotry that motivated Roof. These demonstrations included challenging the symbols that Roof embraced — particularly the Confederate battle flag. Soon after the shooting, local and national leaders called for the removal of the Confederate flag from the grounds of the South Carolina State House in the state's capital of Columbia. In addition, activist groups began challenging the presence of Confederate monuments and related symbols throughout the U.S. South. They also demanded renewed attention to a range of ongoing issues stemming from the region’s long history of racial inequality.

This online tribute, co-curated by Lowcountry Africana, the Lowcountry Digital History Initiative (LDHI), and the College of Charleston's Avery Research Center for African American History and Culture, in partnership with representatives from the Mother Emanuel Church, presents photographs of the memorabilia left outside the church, as well as visual documentation of many of the events that took place in the days, weeks, and months following the tragic mass shooting. The sources for the images in this tribute range from news media outlets, to professional photographers, to city residents and local, national, and international participants in the various marches, rallies, and prayer vigils. As this tribute reveals, Roof’s attack failed to start a “race war.” Instead, it motivated efforts throughout the city of Charleston and beyond to address racial violence, and sparked renewed awareness of the racial injustices in South Carolina’s past and present. As former Senator Malcolm Graham of North Carolina, the brother of Mother Emanuel victim Cynthia Graham Hurd, asserted in the months following the shooting: “We can’t simply move on. We’ve got work to do.” 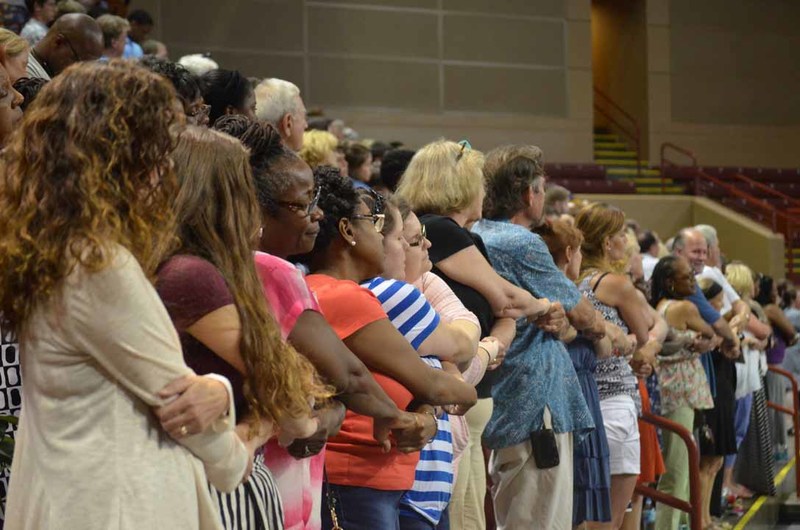 ← About the Online Tribute
Memorabilia at Mother Emanuel Church →