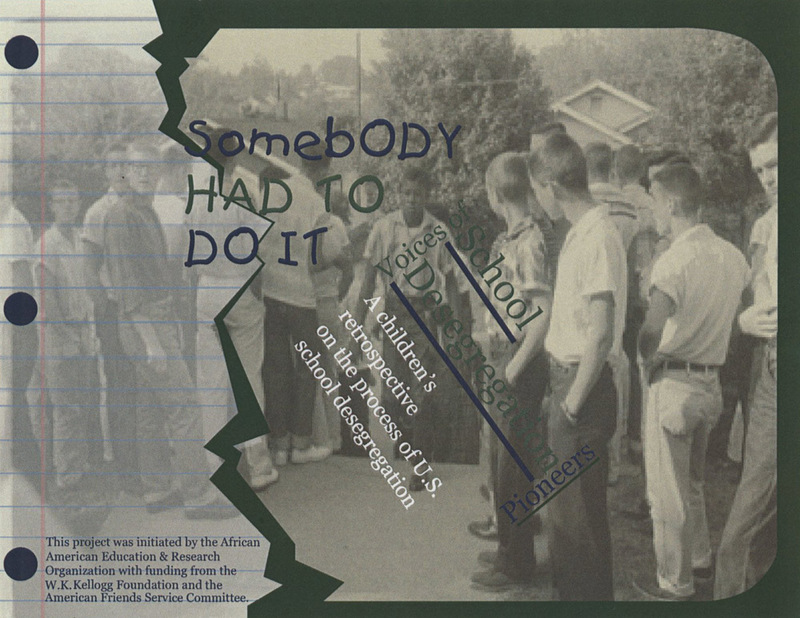 Flyer for "Somebody Had To Do It: Voices of School Desegregation Pioneers, A children's retrospective on the process of U.S. school desegregation," 2008, courtesy of the Avery Research Center.

As the project team began developing the Somebody Had To Do It project in 2006, we were careful to recognize the complex range of struggles that our interview participants experienced as first children. We ultimately believe that research on the civil rights movement must involve analysis and consideration beyond political or historical methodologies. For thousands of African American youth, ranging in age from six to eighteen years old, the movement was also a psychological struggle. For this reason, our project team urges an interdisciplinary understanding of the modern civil rights movement, and we consider the distinctive needs and concerns of each of our participants as we conduct interviews.

In 2007, the American Friends Service Committee (AFSC) emerged as a major supporter by providing funding to the African American Education & Research Organization (AAERO) to initiate the Somebody Had To Do It project. Notably, in our research we discovered that this organization played a historic role in supporting desegregation. In 1952, the American Friends Service Committee established the “Rights of Conscience Program” to aid the families of people fighting for equal rights. The resulting “Family Aid Fund” helped approximately one hundred families across the U.S. South whose children were the first to desegregate schools. The existence and need for this fund reveals some of the immediate risks connected to desegregation efforts. Many families suffered great sacrifices for participating in desegregation, including the loss of jobs, removal from homes and farms, and other economic reprisals. The Family Aid Fund helped ease financial struggles, but for many, emotional scars remained. 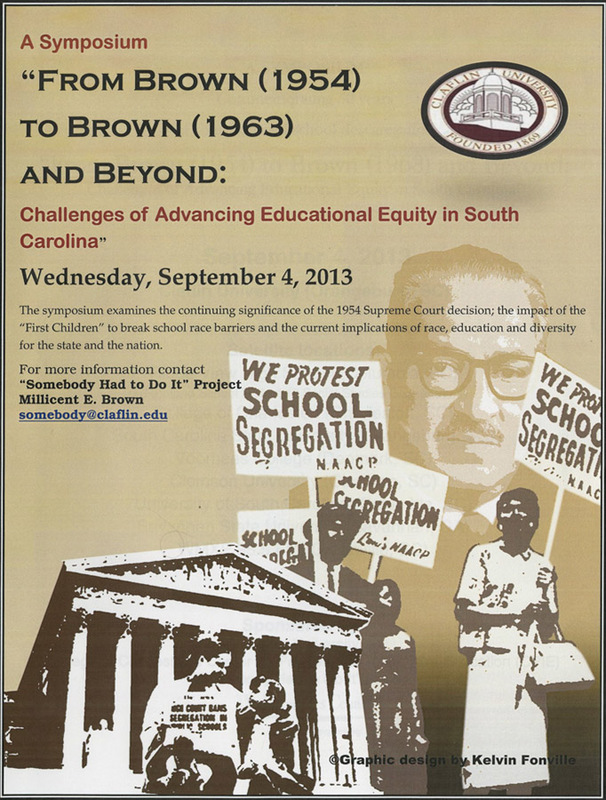 Brochure for "From Brown (1954) to Brown (1963) and Beyond: Challenges of Advancing Educational Equality in South Carolina," courtesy of the Avery Research Center. Claflin University hosted this symposium on September 4, 2013, to commemorate the 50th anniversary of desegregation in South Carolina.

In 2008, the project team also received a matching start up grant from AAERO and the Mid South Delta Initiatives of the W.K. Kellogg Foundation. This support funded my position as the project director of Somebody Had To Do It starting in 2008. At that time I was an Associate Professor of History at Claflin University in Orangeburg, South Carolina, and Claflin became the initial institutional base for the project. In addition to conducting interviews, the project team developed educational activities around Somebody Had To Do It that involved local high school and undergraduate students gathering data, designing promotional materials, and participating in and organizing conferences.

In 2014, I retired from Claflin and moved from Orangeburg to my hometown of Charleston, South Carolina. A year earlier, I signed a memorandum of understanding with the College of Charleston’s Avery Research Center for African American History and Culture to donate our Somebody Had To Do It oral histories collection to Avery’s archives, so that they will be available for public use. As of 2015, the project team has conducted roughly forty interviews with individuals involved in desegregation throughout the U.S. South, particularly first children. In the future, many of these interviews will be made accessible online through the Avery Research Center’s digital collections with the Lowcountry Digital Library, as well as on site through the Avery Research Center. This exhibition features highlights from this collection, and will continue to grow in the future as more of these interviews become available online.

2008
Community Symposium held at Claflin University to introduce the Orangeburg, South Carolina community to the purpose and goals of Somebody Had To Do It

Community Symposium on Somebody Had To Do It held at the College of Charleston’s Avery Research Center for African American History and Culture in Charleston, South Carolina

Panel presentation on Somebody Had To Do It, Association for the Study of African American Life and History (ASAALH) annual meeting, Cincinnati, Ohio

2011
Symposium, “From Brown (1954) to Brown (1963) and Beyond: The Challenges of Advancing Race Relations in Schools and Society,” Hofstra University, Long Island, New York

2014
Panel Presentation on Somebody Had To Do It, The First Annual Penn Center Civil Rights Symposium, November 21-22, 2014, St. Helena Island, South Carolina

2015
Publication of online exhibition Somebody Had To Do It: First Children in School Desegregation with the Lowcountry Digital History Initiative