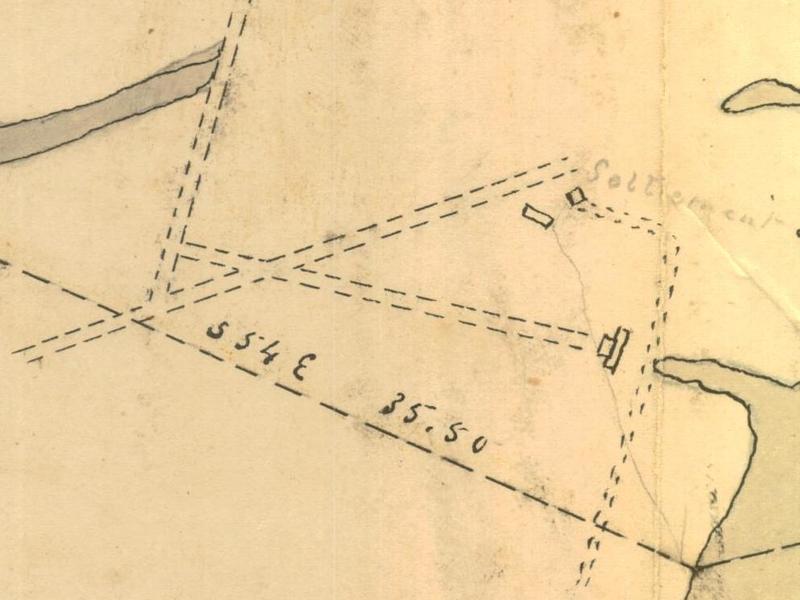 Prior to the nineteenth century very little of the Stono Preserve landscape reflected wealth and status. While the Anglican Church did construct St. Paul’s Parich Church, which was prominently visible from the Stono River and John’s Island, significant intentional alterations to the landscape reflective of wealth were artifacts of the nineteenth and twentieth centuries.

By 1799 Samuel Fickling consolidated several tracts of land, including some of the glebe land, into a single property with boundaries similar to that of Stono Preserve today. A 1799 plat noting Fickling as its proprietor illustrates several landscape features constructed or positioned as a display of wealth. 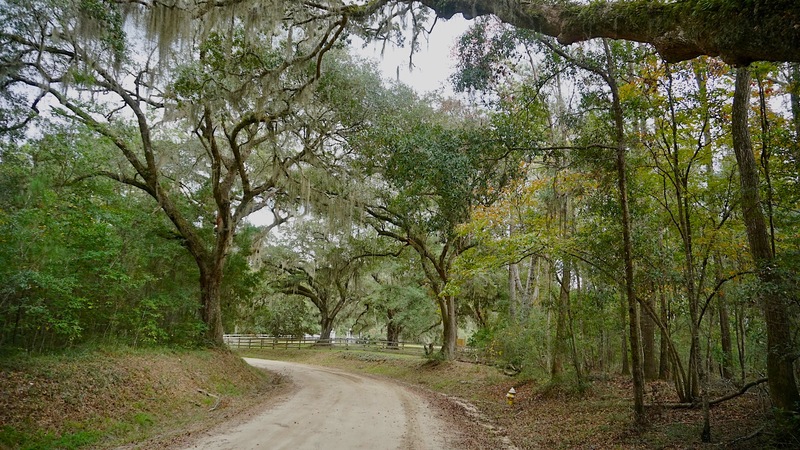 Present-day Dixie Plantation Road, photograph by Cappy Yarbrough, Stono Preserve, 2019. Formerly Willtown Road, it was established in the early 1700s to connect Willtown on the Edisto River and Charles Town. When passing travelers reached the bend in the road, they had a view down the avenue of oaks to the plantation house. 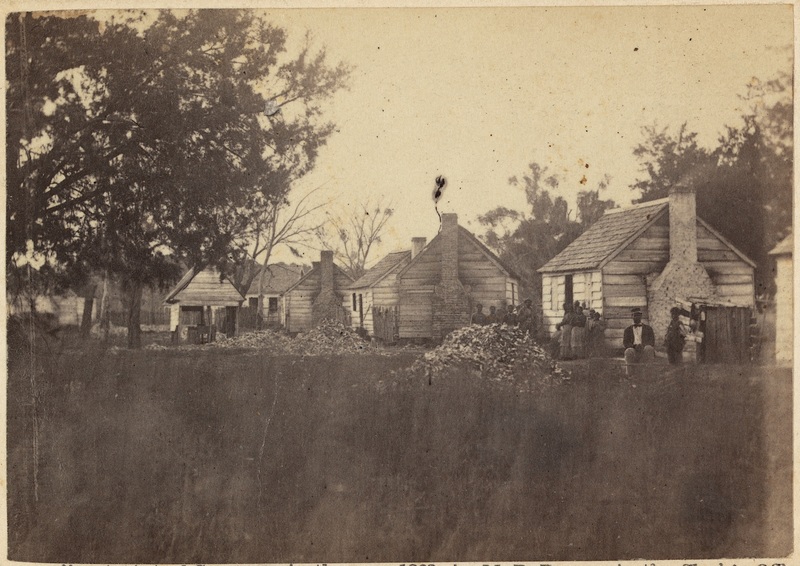 Travelers passed the property coming from the east or the west via Willtown Road (now Dixie Plantation Road), the main thoroughfare from Charleston to the Willtown community on the Edisto River. No matter the direction of arrival, all had to slow at the bend in the road at the Fickling plantation. For those travelers who stopped at the property, they proceeded up a drive to the main house near the bank of the Stono River. The plantation house faced the road. A second access drive led to two buildings labeled “Settlement” where enslaved peoples lived near the main house. In the Lowcountry, typically colonial plantations were organized with slave housing near the places they worked. The consolidation and location of the settlement represents an early example of the changing landscapes of antebellum-era plantations. Slaveholders moved their slave quarters closer to the main house to maintain greater control and surveillance. This also afforded the proprietors the additional advantage of displaying their wealth as visitors approached the main house from the road. 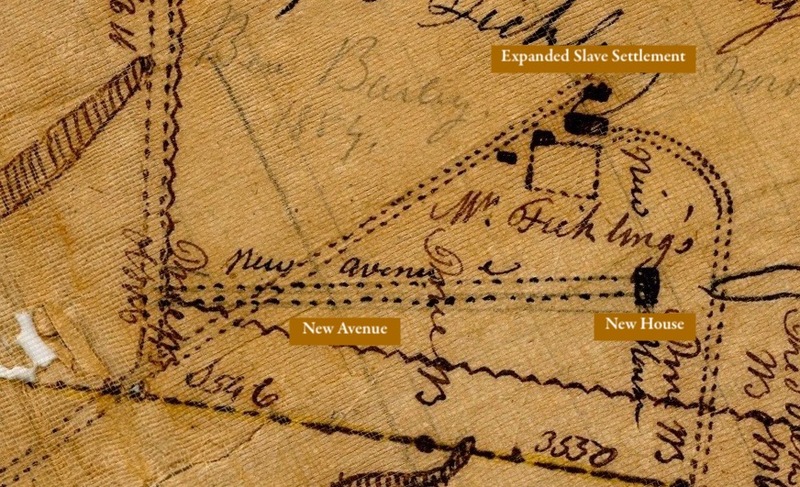 Detail of plat of Stono River land, circa 1807, courtesy of South Carolina Historical Society. The plat illustrates the Ficklings' wealth -- a  “new house”, a “new avenue”, and two new buildings at the slave settlement. 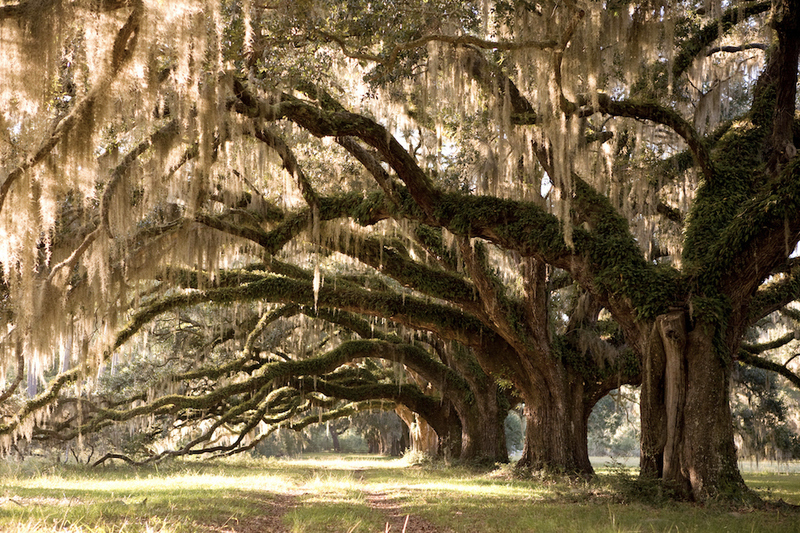 Samuel Fickling died around 1805, leaving the property to his brother, Joseph. A plat from circa 1807 illustrates the landscape changes Joseph made to his property. He built a “New House” and a “New Avenue” – presumably the avenue of oaks seen today. The settlement was expanded from two to four structures. These additional buildings accommodated the addition of five new slaves, bringing the total number of enslaved peoples from 10 in the 1800 census to fifteen in 1810. He also expanded the property to the southeast by 224 acres. With this expansion, suitable land was acquired to construct holding ponds for rice cultivation. The road that ran from the settlement past the main house now continued past a boat landing and led to the three ponds (as it still does today). Comparing the landscape changes between 1799 and 1807 suggests that the Ficklings were successful plantation owners. Within just a few years, they had increased their acreage and the size of the slave settlement and directed enslaved peoples to plant an avenue of oaks, build of a new house, and construction irrigation ponds. 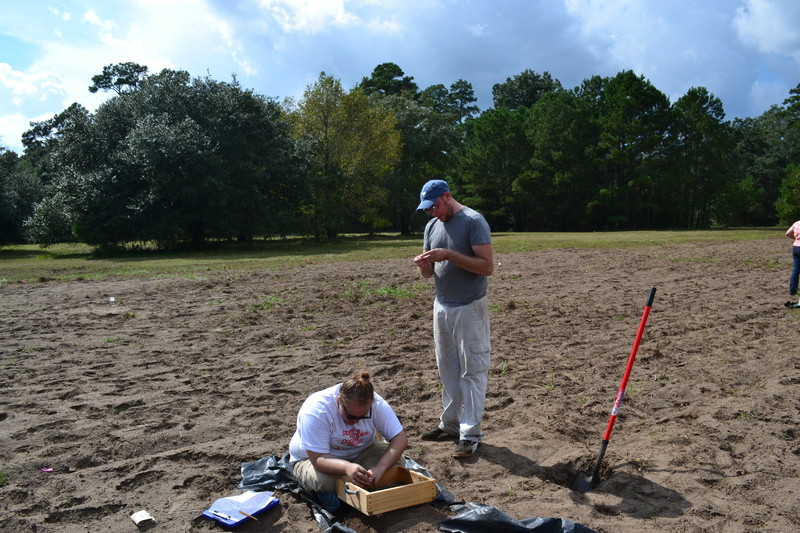 Archaeological investigations conducted where these houses once stood resulted in the recovery of over 4,000 artifacts, primarily ceramics, bottle glass, window glass, nails, and tobacco pipe fragments. The density of artifacts along the avenue of oaks is quite low relative to the house site, suggesting that from the time the avenue was planted, it functioned as a symbolic display of wealth and not a residential or work area. No structural foundations were discovered dating to the Fickling occupation. The simple outlines of the structures seen on the two early nineteenth century plats provide the only clues to the structure of the plantation house. Despite the stereotype, most antebellum plantation houses in the Lowcountry were not larger manors, such as those seen at nearby Drayton Hall and Middleton Place. Instead, most antebellum plantation homes were farmhouses. The Fickling house was probably just such a farmhouse.

Detail of Colleton District map (1825), surveyed by Samuel Ruddock in 1820, courtesy of the University of South Carolina Libraries Digital Collections. The left arrow points to Willtown Road. At a sharp bend, the dotted line represents the drive leading to the Linah property (Edward Lynah owned the property at the time of survey). The top arrow points to the new location of St. Paul’s Church. It moved from its original location along the Stono River to this location in the 1750s.

By 1825 Edward Lynah, a prominent Charleston businessman, owned the property (as noted on the Robert Mills map). How he acquired the property is a bit unclear. Joseph Fickling’ died in 1815 and his land is advertised in a “Sheriff’s sale” at the state courthouse in Jacksonboro on August 4, 1817. Lynah married Elizabeth (Eliza) Fickling in 1816. While no deed transfer has been located, it is assumed that the property was purchased by Lynah to keep it in the family. While Lynah owned several properties and fifty slaves according to the 1830 census, it is not known how many of those slaves lived and worked at the plantation on the Stono River. There are no documented changes to the landscape with Lynah’s ownership.

There are no documented transfers of ownership until nearly two decades later when Benjamin Bailey acquired the property. The single documented landscape change between ca. 1807 and 1860 was the addition of five slave houses reported in the 1860 census, bringing the total to nine. For Bailey and many Southern plantation owners, the Civil War and Emancipation brought an end to their wealth, and in 1863, Bailey sold his plantation to Fredrick Richards. In the post-Civil War era, the Richards family operated the property under tenant farming labor using much of the existing landscape. Tenant farming on the Stono Preserve property ended by the early 1940’s in 1917, concluding the long history of the land as agricultural use.

← The Landscape of Wealth
Twentieth Century →