From the end of the Civil War to the early 1900s, landowners made no significant landscape changes that reflect wealth. Transformations began anew in the early twentieth century. This display of wealth reflects a boarder movement in Charleston and the South focused on the opulent beauty of the colonial and antebellum eras, while downplaying narratives of the slave system that drove the economy. Indicators of wealth shifted away from the number of slave homes, work buildings, and large tracts of agricultural land. Instead, wealth was symbolically reflected in home architecture, leisure facilities, and formal gardens.

In 1917, George W. Williams, Jr., the son of one of the wealthiest men in Charleston, purchased the then 732-acre property. Until this point, tenant farmers, many who were freed slaves and their descendants, cultivated much of its lands. The Williams family transformed the property into a space of leisure for the elite, serving as a weekend retreat to entertain family and friends. George Williams Jr.’s father, George Walton Williams Sr., built his wealth as a businessman brokering Lowcountry cotton in Charleston. When this urban family purchased this rural property, they were joining both Northern and Southern elite in the trend romanticizing the plantation past.  Williams made a significant change to the landscape, one that denoted his sense of the property’s value as a marker of his status and wealth. He paid for the construction of a new house at the end of the avenue of oaks. The placement of the house and its Colonial Revival architectural style (popular at the time), evoked for Williams and his guests the desired imagery of a grand Southern plantation house.  The Williams’ house was designed for entertaining with six master bedrooms, sleeping porches, several indoor bathrooms, and a large living area. In 2008, archaeologists uncovered portions of the brick foundation and front steps of this house. 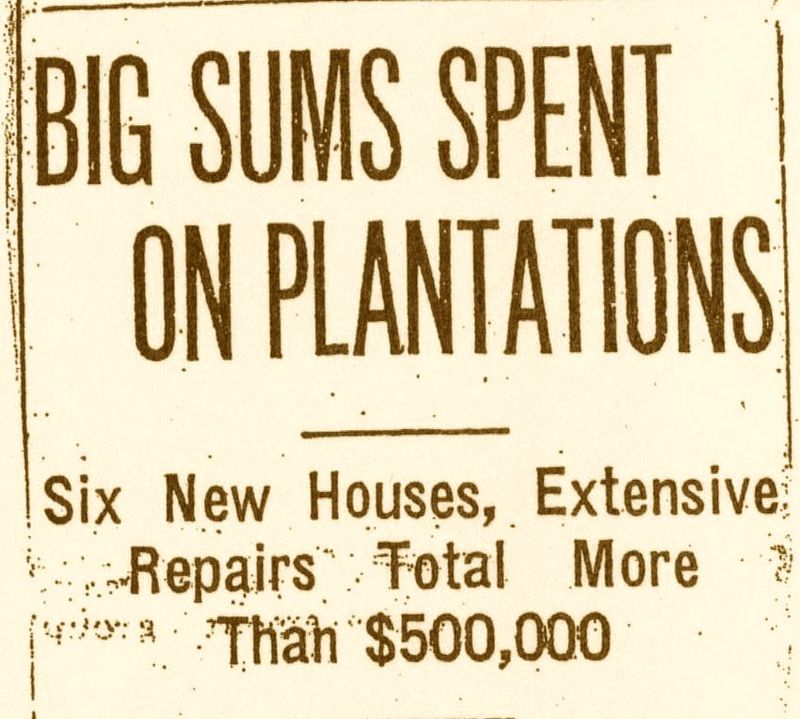 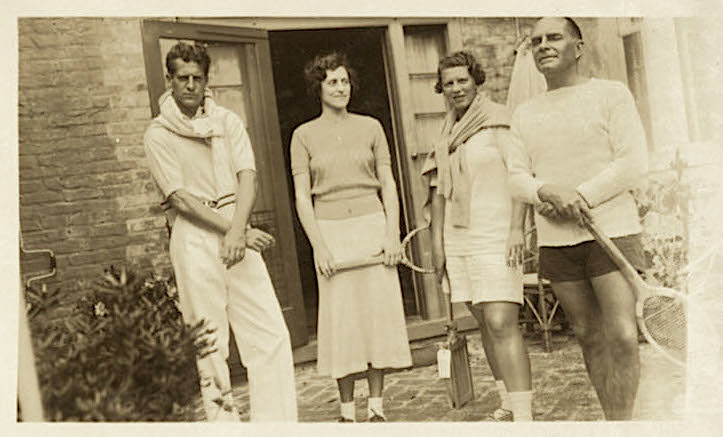 (Top to bottom) Two excerpts from a news article about purchase of five plantations, "Big Sums Spent on Plantations," News and Courier, South Carolina, 1936; tennis players at Medway Plantation, 1933; all courtesy of College of Charleston Libraries. The Feirmontes were part of a larger phenomena of wealthy American families purchasing old plantations homes and turning them into spaces of leisure and sport. Tennis courts were added to multiple Lowcountry plantation sites during these remodels.

In 1935, over a decade after Williams’ death, the family sold the property to Vincenzo and Madeleine Fiermonte. Like the Williams and many other wealthy families, the Fiermontes purchased the property as a vacation home. The Fiermontes also made significant changes to the property’s landscape reflecting its function as a vacation home. They constructed several recreational facilities including a swimming pool, clay tennis courts, a skeet field, and a racetrack. In addition, the Fiermontes commissioned $30,000 in renovations to the 1918 house, adding electricity and telephone wiring. These extravagant additions reflected the reimagining of plantations from spaces of labor to spaces of leisure.

The couple’s most noteworthy change was architectural. They transformed the 1918 Colonial Revival style house into one inspired by Greek Revival architecture. In the early twentieth century, the Fiermontes and many other Southern plantation landowners, with the help of early twentieth-century novelists and filmmakers, reimagined the antebellum plantation houses and began the process of reducing the entirety of a plantation to “the big house” in American memory. Conspicuously absent from the Williams, the Fiermontes, and many other wealthy families’ reimagined plantation rebuilds were the buildings typical of plantation landscapes in the pre-Civil War eras. Slave homes, barns, kitchens, and cotton gin houses—the most important buildings on a plantation—were no longer necessary, and elite whites were not interested in reconstructing buildings that conjured the violence and inhumanity of the space they purchased. While plantations existed for the sole purpose of using free forced labor to build wealth for whites, twentieth century landowners engaged aspects of the landscape of wealth so narrowly that it swept painful historical realities into the shadows. 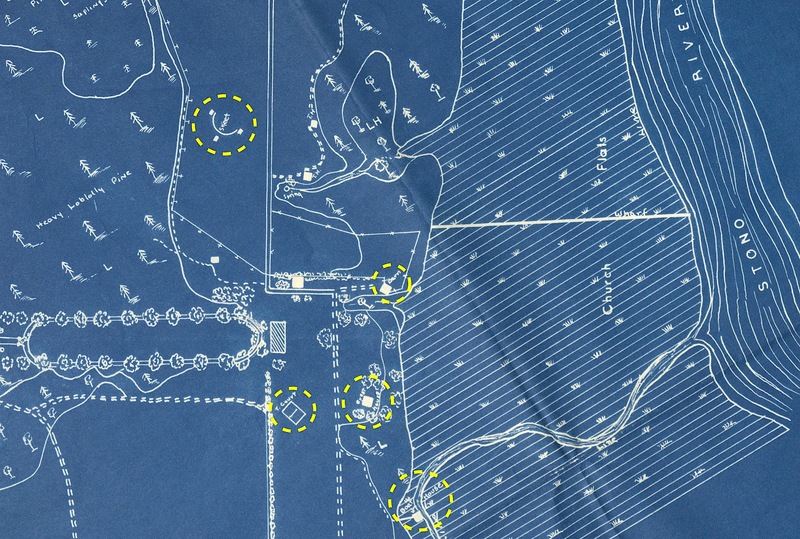 Detail of Dixie Plantation plat highlighting spaces of leisure, 1943, courtesy of South Carolina Historical Society. A skeet range, the tennis court, and the boat house are among the leisure spaces that Fiermontes added, obscuring its previous use as a site of forced labor.

The Fiermontes divorced in 1938, and Madeleine, who returned to using the last name of her second husband, William Dick, maintained ownership of the property. In December of that year, Madeleine Dick planned a visit to the newly renovated house. The evening before her arrival, servants started the new coal furnace sparking a fire that quickly engulfed the house in flames. She never rebuilt the house, nor returned to the property before her death on March 27, 1940. Her third son, John Henry Dick, inherited the property and lived there until his death in 1995. 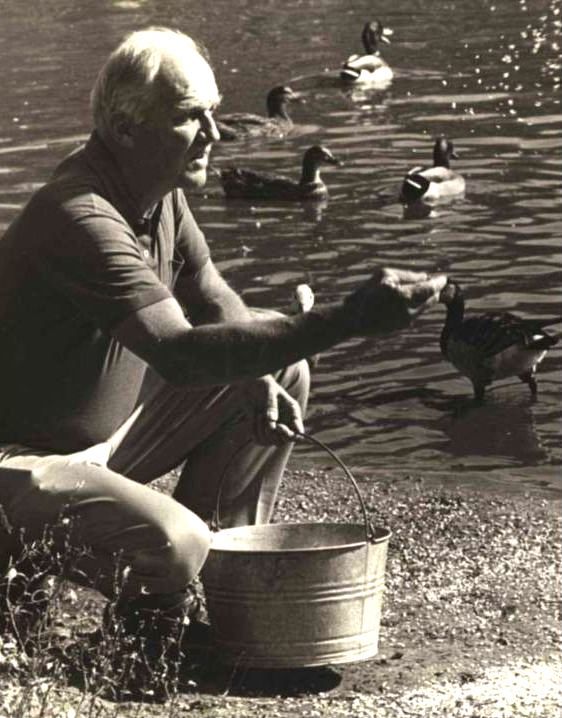 After returning from serving in the Army during World War II, John Henry made Dixie Plantation his permanent home. In 1947, he constructed his house and art studio along the Stono River. Though John Henry Dick never married or had children, he often entertained extended family and friends at his home. Hundreds of photographs of these gatherings are housed at the College of Charleston Libraries archives, while thousands of his photographs of travels and wildlife are available online.

A naturalist, who became well known for his wildlife paintings, John Henry Dick devoted the later part of his life to transforming the property into a nature sanctuary. Birds were a favored subject of his paintings, and many changes he made to the landscape were designed to attract a variety of waterfowl and migratory birds that provided a ready source of inspiration for his well-known bird illustrations. John Henry constructed several birdhouses, an aviary, and restored native plantings throughout the property. His most significant modification to the landscape was to reconstruct the former dam at the southern reaches of his property. As seen in a circa 1807 plat, enslaved peoples constructed the original dam, modifying a small tidal creek into a series of holding ponds used to regulate water to the rice fields. After years without regular maintenance, the earthen dam eroded and the former rice fields returned to nature. With the reconstruction of the dam and other features to control water flow, John Henry Dick created a unique, interconnected water system that provided salt, brackish, and freshwater environments in a single location creating habitats for a variety of lowland birds and animals. 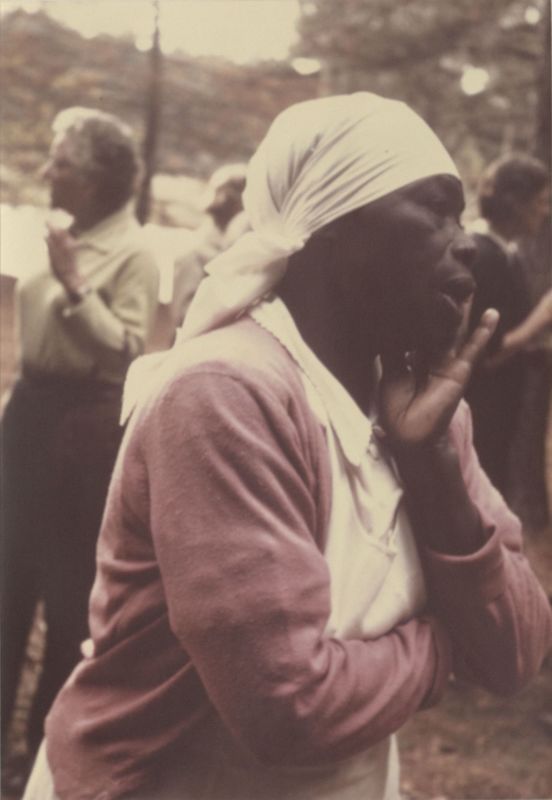 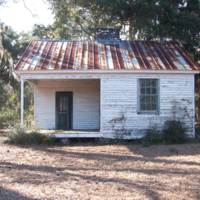 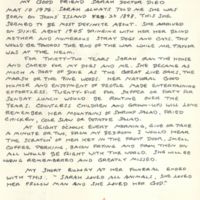 Excerpt about Sarah from the scrapbook of John Henry Dick, 1960-1980, courtesy of South Carolina Historical Society.

John Henry employed a number of people to maintain his home and lands, some of whom lived on the property in former tenant houses. He wrote fondly of a local woman, Sarah Doctor, who he employed as his housekeeper and cook. Beyond what John Henry wrote of Sarah in his journals, little of her story is known, except that she was born on John’s Island in 1898 and married Peter Doctor. On a 1912 plat, there are a series of names listed along Willtown Road, one of which is “Doctor.” The Doctor (or Dockter) family can be traced back as far as the 1870 census, the first taken after the Civil War. The census taker recorded that Edenboro Dockter, was 28, black, and a field laborer who could neither read nor write. He resided with his sister-in-law Claranda (24) and her children Wedentin (5), Sarah (3), Sam (2), and Jane (2 months). By 1910 Edinburgh Doctor (as he was now recorded by the census taker) was living with his wife, Ella, and their three children one of which was Peter. All but the youngest were listed as field laborers who could not read or write. However, Edinburgh owned his own home free and clear of a mortgage. While Sarah’s in-laws had a long history in the area, and might once have been enslaved on Dixie Plantation lands, it is yet unknown whether she grew up in the vicinity or first came to the property when she married.

Sarah worked for John Henry for over thirty years, living in the still-standing tenant house just north of the avenue of oaks. Her house had a porch and three rooms with a central fireplace. It is interesting to note that the interior kitchen walls were painted a shade of blue traditionally called “haint blue” in the Lowcountry. Though the purpose of the color in Sarah’s home is not known, this color is significant to the Gullah and other African-Americans today because of the long-standing belief that the color keeps the haints, or spirits, from entering the home. This belief originated in traditional West African religions and came to the New World with enslaved Africans. 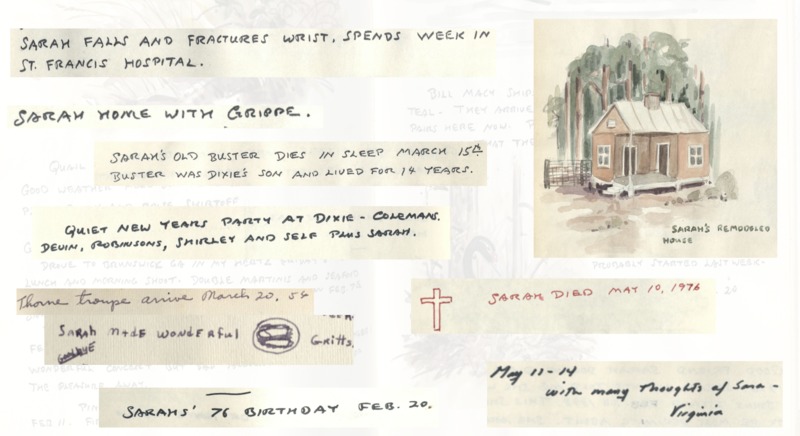 Excerpts about Sarah from the scrapbook of John Henry Dick, 1960-1980, courtesy of South Carolina Historical Society.

Without documentation, written or recorded by Sarah, there is no way to understand Sarah’s perspective on her life at Dixie Plantation. Sarah’s employment in domestic work reflects the limited employment opportunities twentieth-century black women had in the Lowcountry. Many black women of her generation had employment choices similar to the work of enslaved women: agricultural work, child care, and domestic work. While the physical landscape had changed over the centuries, threads of its early history were still sewn into its fabric. For Sarah, this meant that employment opportunities in the Lowcountry and across the United States were still governed by race. In the twentieth century, three centuries from its beginning, the landscape of wealth continued to benefit those it had always served.