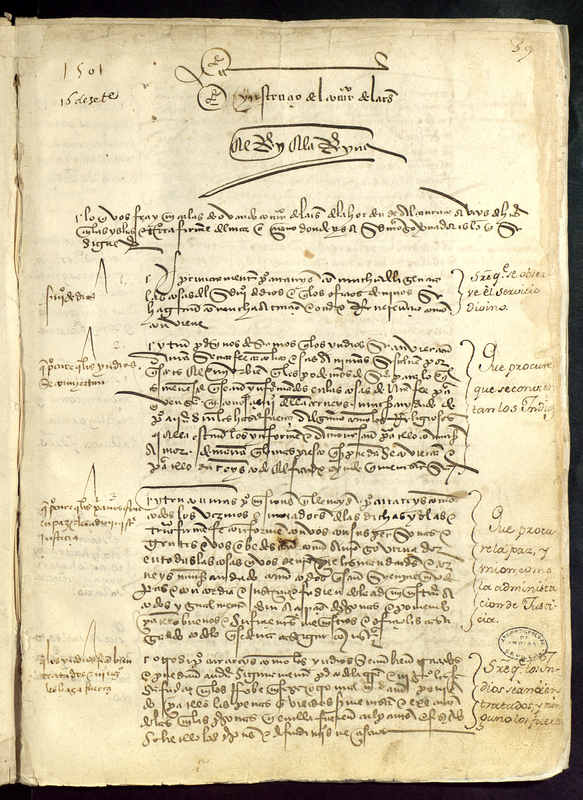 A letter from Spanish monarchs Ferdinand and Isabel to Nicolas Ovando allowing black slaves of African descent to be imported to Hispaniola (present day Dominican Republic and Haiti), 16 September 1501, courtesy of the Archivo General de Indias, Sevilla, Spain. The monarchs reasoned that recent converts, heretics, and peoples of other religions would harm the American Indians’ conversion to Catholicism. However, they permitted slaves of sub-Saharan African descent provided that they were born in Spain. This is the first known example of Europeans transporting black slaves across the Atlantic to work in the New World.

English Translation Because with great care we have procured the conversion of the Indians to our Holy Catholic Faith, and furthermore, if there are still people there who are doubtful of the faith in their own conversions, it would be a hindrance [to them], and therefore we will not permit, nor allow to go there [to the Americas] Moors nor Jews nor heretics nor reconciled heretics, nor persons who are recently converted to our faith, except if they are black slaves, or other slaves, that have been born under the dominion of our natural Christian subjects.

Nicolas Ovando was the first political leader to oversee the trans-Atlantic slave trade to the Americas when he imported black slaves from Spain to the island of Hispaniola. Ovando was the third governor of the “Indies”—as Spanish documents typically refer to Spain’s American colonies—after Christopher Columbus and Francisco de Bobadilla, and assumed his post in 1502. The Catholic monarchs charged Ovando with indoctrinating Amerindians, noting that as recent converts, they should not be allowed contact with Muslims, Jews, or Protestants. The monarchs therefore banned North African “Moorish” slaves from being transported to the New World, but allowed “black slaves and other slaves” who were born under “Christian dominion”—presumably meaning those born in Spain or Portugal. While the original 1501 charter between the Spanish crown and Ovando left open the possibility that some slaves shipped across the Atlantic might not be of African descent, every subsequent letter exchanged between Ovando and Spain after 1502 referred to slaves exclusively as “negros,” or “blacks.”

Ovando at first resisted the trans-Atlantic slave trade. When the first slaves arrived in Hispaniola, some quickly escaped into the mountains and began launching raids against Spanish settlements. In 1503, Ovando even petitioned the Spanish government to ban the trans-Atlantic slave trade, arguing that if more black slaves escaped they might incite the Amerindians into open revolt. The governor had good reason to be concerned—not long afterwards the island saw a major indigenous uprising known as Enriquillo’s Revolt (1519-1533). This revolt overlapped with a period of increasing African resistance, and may have involved some collusion with enslaved Africans. 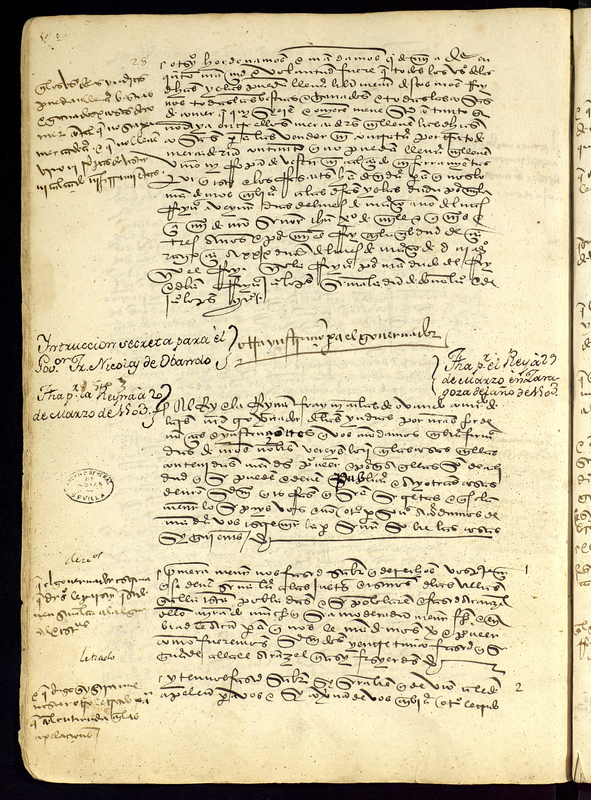 Letter from the Spanish monarchs Ferdinand and Isabel to Nicolas Ovando, Spain, 20 March 1503, courtesy of the Archivo General de Indias, Sevilla, Spain. The monarchs, on Ovando's recommendation, ban the trans-Atlantic slave trade. In the fourth paragraph from the top, the Spanish monarchs address Ovando’s concern that escaped black slaves might inspire the American Indians on Hispaniola to revolt and, on Ovando’s recommendation, Ferdinand and Isabel ban the trans-Atlantic slave trade.

English Translation Concerning the black slaves that you say should not be sent there [to Hispaniola], because there they have escaped, regarding this issue we command that what you say be done.

The governor changed his mind in 1505 and sent a request to King Fernando II for seventeen slaves to be sent to the mines in Hispaniola. The king was even more ambitious than Ovando about using slave labor to increase gold production, and sent one hundred black slaves from Spain directly to the governor. Five years later, the “negro” slaves proved so effective that Ovando had 250 more slaves transported from Europe to work in the gold and copper mines.