From 1501 until 1518, the trans-Atlantic slave trade was comprised of black slaves transported from Iberia. Direct slave traffic from Africa was not initially permitted for the same reasons that colonists were repeatedly forbidden from bringing enslaved Muslims and moriscos to the Americas: the Spanish Crown worried that captives from sub-Saharan Africa might introduce non-Christian religious practices to Amerindian populations. Though very little is known of the earliest slave trade to the Americas, the number of slaves transported during these years appears to have been comparatively minimal.

As Hispaniola’s once vibrant native population plummeted from 60,000 in 1508 to less than 20,000 ten years later, it became clear that colonists had to import laborers in order to sustain the colony’s gold placer mines and its nascent sugar industry. Echoing Ovando, Spanish colonists and administrators clamored for permission to import African slaves. In 1516 even Bartolome de Las Casas, the same Dominican friar who fought tirelessly for the rights of Amerindians, proposed replacing native labor with African slaves, whom he believed were better suited for harsh physical labor. (Las Casas later recanted this opinion and dedicated a substantial part of his work Historia de las Indias to condemning the African slave trade and Iberian slave markets.) 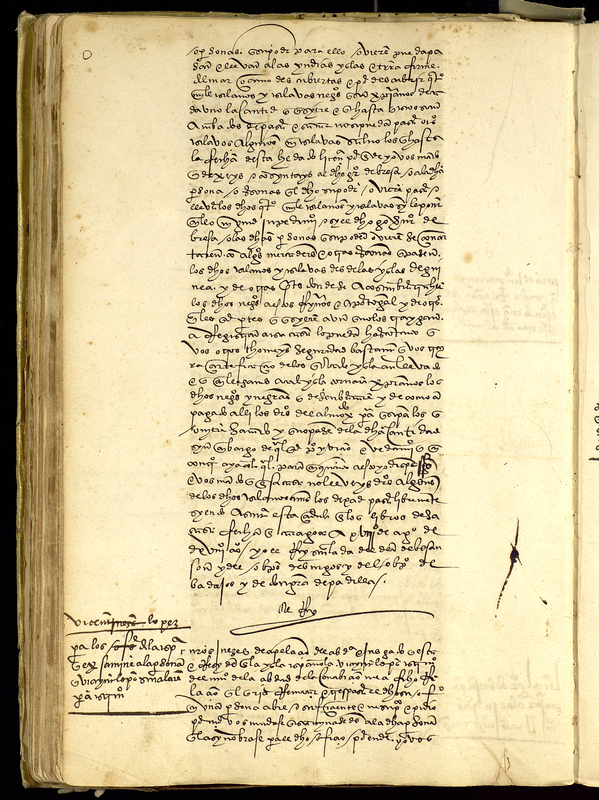 Charter granted by Emperor Charles V to Lorenzo de Gorrevod for permission to transport slaves, Spain, 18 August 1518, courtesy of the Archivo General de Indias, Sevilla, Spain. Before 1518, the slave trade was highly regulated and consisted mostly of slaves being sent from Spain to the Americas directly by the Spanish government. However, Emperor Charles V opened the trans-Atlantic slave trade on a massive scale on August 18, 1518 when he granted a charter to Lorenzo de Gorrevod, giving him permission to transport 4,000 slaves directly from Africa to the Spanish American colonies. He circumvented the legal statute established by Fernando and Isabel that slaves must have been born in Spain by allowing Africans to enter the Americas provided they “convert” during the voyage.

English Translation Our officials who reside in the city of Seville in our House of Trade of the Indies; know ye that I have given permission, and by the present [instrument] do give it, to Lorenzo de Gorrevod, governor of Bresa, member of my Council, whereby he, or the person or persons who may have his authority therefore, may proceed to take to the Indies, the islands and the mainland of the ocean sea already discovered or to be discovered, four thousand negro slaves both male and female, provided that they be Christians, in whatever proportions he may choose [. . .] and if the said governor of Bresa or the persons aforesaid who may have his authority, should make any arrangements with traders or other persons to ship the said slaves, male or female, direct from the isles of Guinea and other regions from which they are wont to bring the said negros to these realms and to Portugal, or from any other region they please [. . .] that the said negroes male and female, having become Christians on reaching those islands, and how they have paid the customs duties there, in order that those taken be known and be not in excess of the aforesaid number.

In 1518, Fernando and Isabel’s grandson, Emperor Charles V, abolished the provision requiring slaves to be born under Christian dominion, and issued a charter allowing four thousand Africans to be purchased directly from Portuguese traders in the Cape Verde Islands and transported to the New World. The first slave ships presently known to have sailed with captives directly from Africa to the Americas embarked from the Cape Verde Islands and São Tomé, arriving in Hispaniola, Puerto Rico, and Cuba during the mid-1520s.

The Iberian slave trade from Africa to the Caribbean expanded over the following decades, with the Spanish Crown selling “licenses” for specific numbers of slaves to individuals who would either arrange a slaving voyage, or attempt to make a profit by reselling the same license to a third party. In many cases, Spanish migrants to the Americas acquired licenses to bring one or more enslaved people with them. The Crown increasingly relied on large-scale slaving ventures based on contracts, or asientos, in which merchant houses agreed to transport a certain number of captives to Spanish American ports over a set period of time. Due to the participation of non-Hispanic merchants—especially the Portuguese during the sixteenth and early seventeenth centuries, but also the Genoese and Germans, and later the English, French, and Dutch—the asiento system helped to internationalize the trans-Atlantic slave trade long before the establishment of non-Iberian colonies in the Americas, or non-Iberian trading factories in western Africa.

Non-Iberians were also heavily implicated in slave trafficking in the early colonial Spanish Americas as pirates, corsairs, and smugglers. By the mid-sixteenth century, French interlopers raided Luso-African outposts and captured slave ships in western Africa, transporting captives to sell covertly to Spanish American colonists. By the 1560s, English mariners would follow their example, likewise circumventing the Iberian monopoly. By the early seventeenth century, early English colonies in the Americas began to rely on small numbers of enslaved Africans captured by privateers who preyed on Portuguese and Spanish shipping. In this regard, the Iberian slave trade connected to subsequent slave trafficking by other European nations, and closely overlapped with early non-Iberian overseas expansion, colonization, and dependence on enslaved African labor.