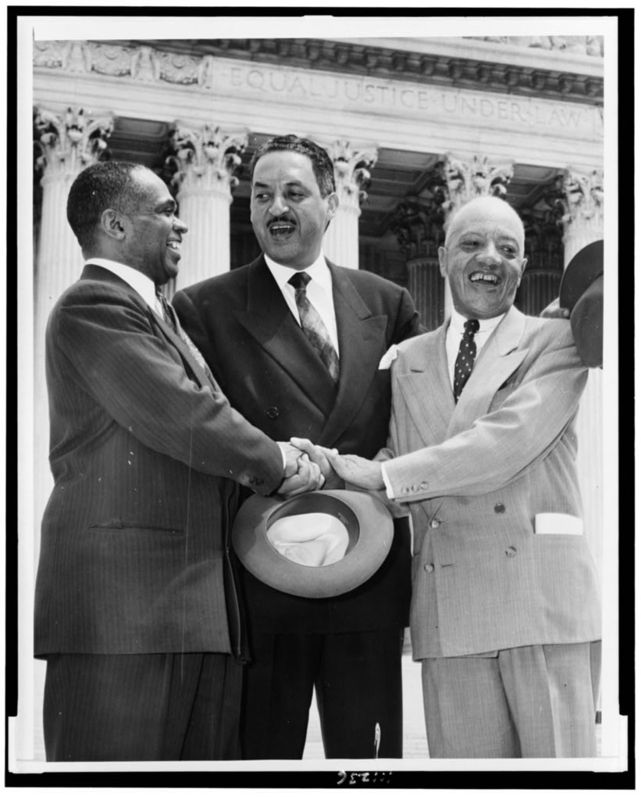 As the largest African American public school on the Charleston peninsula, Burke High School began to experience dramatic changes in the 1950s with new legislation for school desegregation. In 1952, Reverend Joseph A. DeLaine in Summerton, South Carolina organized African American parents in Clarendon County, including Harry and Eliza Briggs, to litigate for bus transportation to public schools for their children. Thurgood Marshall and the NAACP picked up this case, Briggs v. Elliot, to argue for equally funded schools throughout the state. White political leaders in South Carolina had anticipated this litigation. Before Briggs v. Elliott, they attempted to avoid integration by equalizing school facilities, teacher salaries, and other educational expenditures throughout South Carolina, in a belated attempt to adequately meet the “separate but equal” provision that had defined educational policies in the U.S. South since the Plessy v. Ferguson decision in 1896. This statewide equalization program led to the construction of a new Burke High School on the same location as the former building. It also led to new high schools for African American students in North Charleston (Bonds-Wilson High School), John’s Island (Haut Gap High School), and James Island (W. Gresham Meggett High School). These additional African American schools alleviated overpopulation pressures on Burke facilities to accommodate students from surrounding areas. Still, the state’s equalization program ultimately failed to prevent desegregation, and South Carolina’s Briggs v. Elliot case became one of the five cases that launched the monumental Brown v. Board of Education Supreme Court decision in 1954 to desegregate schools throughout the nation. 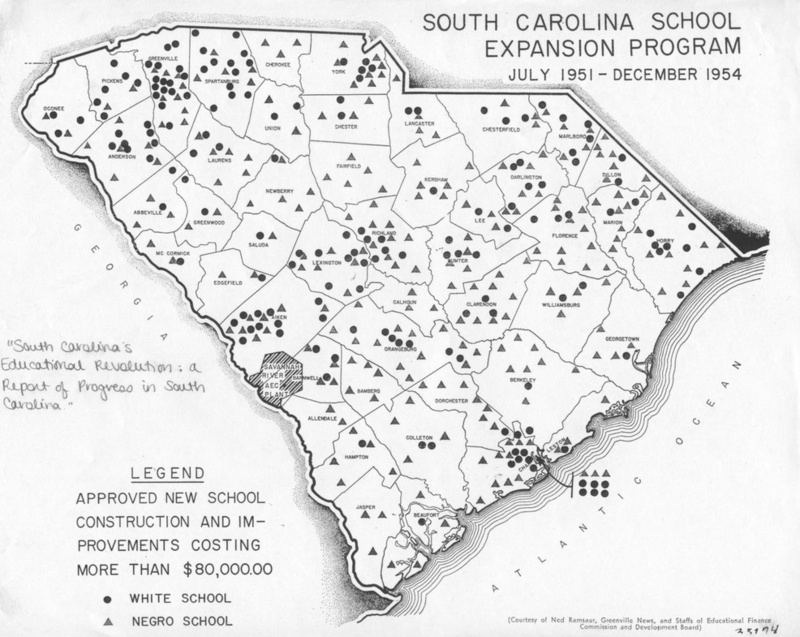 The Brown v. Board of Education decision did not immediately desegregate public schools in Charleston. Through various delay tactics, segregationist leaders in the city prevented school integration for nearly a decade. The 1954 Brown decision did, however, coincide with a significant merger between Avery and Burke. The city of Charleston closed the Avery Normal Institute months prior to the historic Brown decision. Government officials argued that the newly renovated and accredited Burke High School had the capacity to absorb the faculty and student body that attended Avery, which was then a public school. The merger between the two schools resulted in a high school that comprehensively adopted both a liberal college preparatory program and a vocational education model. The historic divide between the two institutions effectively ceased before the first phases of desegregation in Charleston. 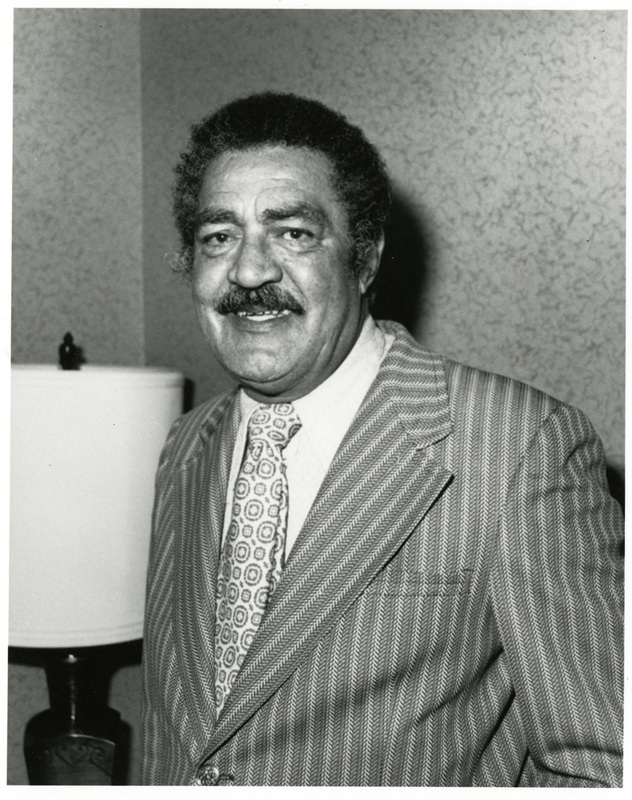 Burke High School students worked with local activists to play a major role in organizing protests for integration and equality during the civil rights movement of the 1950s and 60s. The College of Charleston and the Citadel did not accept African Americans at this time, and the city did not feature a historically black college, so black activism was non-existent on college campuses in Charleston compared to other U.S. cities. Burke High School students filled this void by becoming active participants in the Charleston Movement. Under the leadership of J. Arthur Brown and I. DeQuincey Newman, many young people joined the NAACP Youth Council.

Faculty at Burke High School, particularly Eugene C. Hunt, encouraged their participation. Burke students took part in local marches, sit-ins, and statewide planning meetings. The sit-in at the S.H. Kress store in downtown Charleston became one of the most significant examples of Burke’s student activism. On April 1, 1960, twenty-four students marched to Kress, a segregated five-and-dime store in a major commerce district on King Street. They occupied nearly one half of the lunch counter seats, and were arrested for trespassing. The Kress sit-in was the first direct action protest in the city of Charleston. Over the next few years, young African Americans in Charleston, many of them from Burke High School, participated in boycotts, protests, and demonstrations demanding racial equality and the abolishment of Jim Crow segregation. Millicent Brown, a Burke High School student, was one of twelve students to desegregate the first public elementary, middle, and high schools in the fall of 1963. 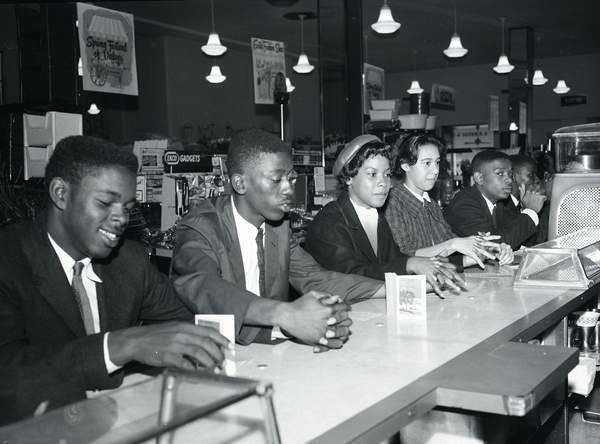 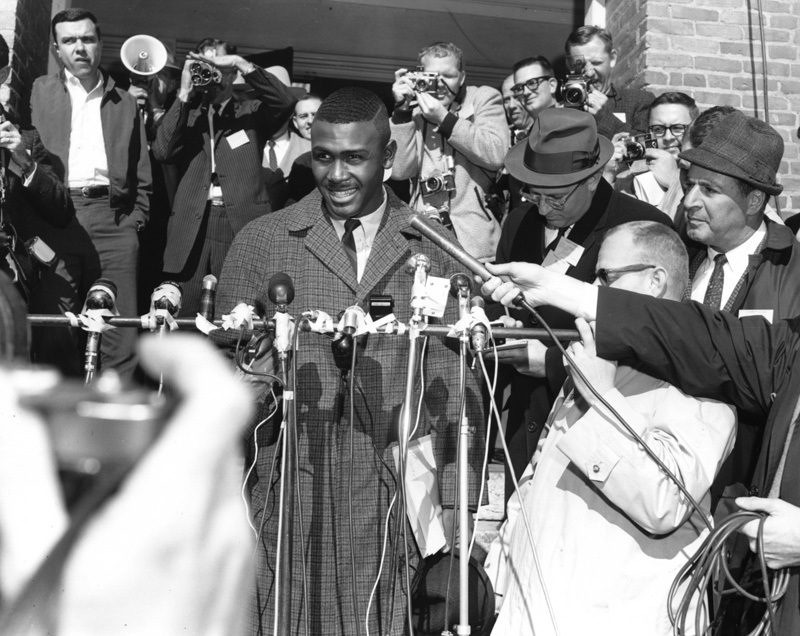 Burke High School students who graduated in the 1960s also shaped the changing environments of colleges and universities during the civil rights movement. Harvey Gantt, a Burke graduate in 1960, became the first student to desegregate public college education in South Carolina when he enrolled at Clemson University in 1963. Later that same year, Delano Meriwether (who also graduated from Burke in 1960) desegregated the Duke University School of Medicine. Students also had an option to attend the Citadel once the military college began to enroll black students in 1966. The College of Charleston desegregated in 1967. Historically black colleges remained a strong option for postsecondary education, and they were also sites of powerful civil rights protests. During the 1968 Orangeburg Massacre on the campus of South Carolina State University, white highway patrolmen killed three African American student protestors and wounded twenty-seven others. This tragic event at a historically black college played a prominent role in the ongoing struggle for full racial equality in the state.