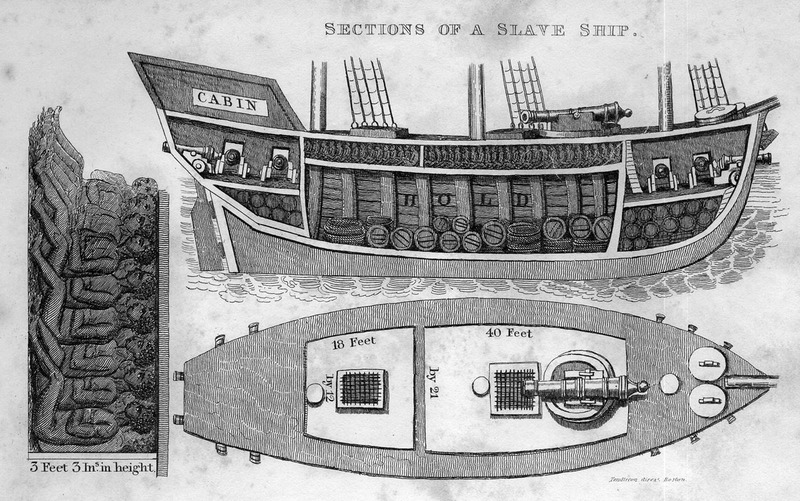 Diagram of a slave ship, in Robert Walsh's Notices of Brazil in 1828 and 1829, Boston and New York, 1831. Ships used for the illegal slave trade were not built to be "slavers," so illegal traders such as Almeida had to purchase additional equipment to add to the Putnam (later the Echo) for holding human cargo. 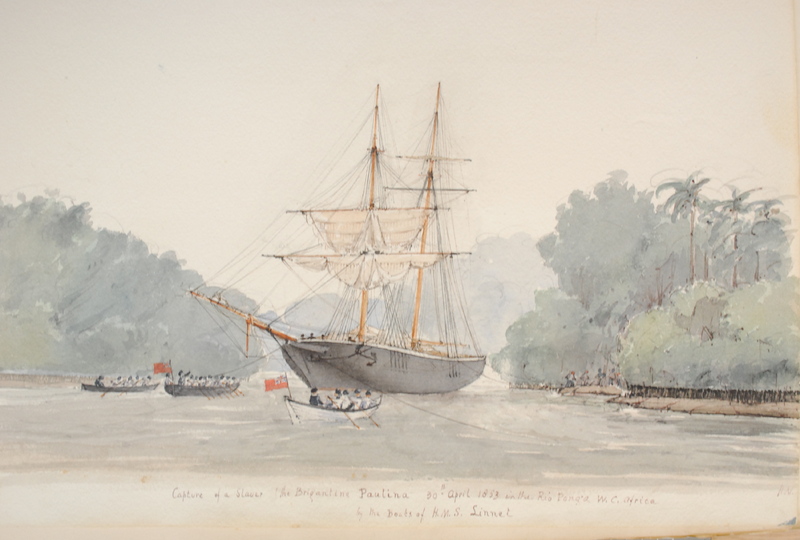 "Capture of a Slaver the Brigantine Paulina," in the Rio Ponga, West Central Africa, painting by Francis Meynell, 1853, courtesy of the National Maritime Museum, London, United Kingdom. Despite the efforts of anti-slave trade patrols, the illegal trans-Atlantic slave trade thrived in the nineteenth century.

The Echo was not always a slave vessel, nor was it always known as the Echo. When the brig was constructed in Baltimore, Maryland in 1845, it was registered as the Putnam. Like most vessels that ended up in the illegal slave trade, the Putnam had a long prior history of legitimate trading. Its first owners in Baltimore operated the brig in legal commerce with Mozambique, and during the 1850s, the Putnam carried sugar from the Caribbean to U.S. ports for New York City merchants Everett and Brown.

When Everett and Brown sold the Putnam to New York City slave traders in 1857, U.S. involvement in illegal slave trafficking was reaching its peak. New York City, New York, and New Orleans, Louisiana, two fast-growing ports, were at the center of this trade in the United States. These cities became prominent illegal slave trade centers shortly after 1850, when the traffic to Brazil closed, forcing slave traders to reconfigure their key ports. Within a few years, a dozen exiles from Brazil arrived in New York to organize slave trading to Cuba, the final large-scale slave-importing zone in the Americas. These merchants, many of whom were natives of Portugal, became known collectively as the “Portuguese Company." New York proved to be an ideal port for launching illegal slave voyages at this time: it boasted an abundance of available vessels and seafarers, it was overseen by overstretched and often corrupt port officials, and it even offered a legitimate trade in West African palm oil that could serve as a cover for illegal human trafficking. In 1857, the Portuguese Company sent the Putnam on its first illicit slaving voyage. It was one of fifteen slave voyages that departed from New York in that year alone. 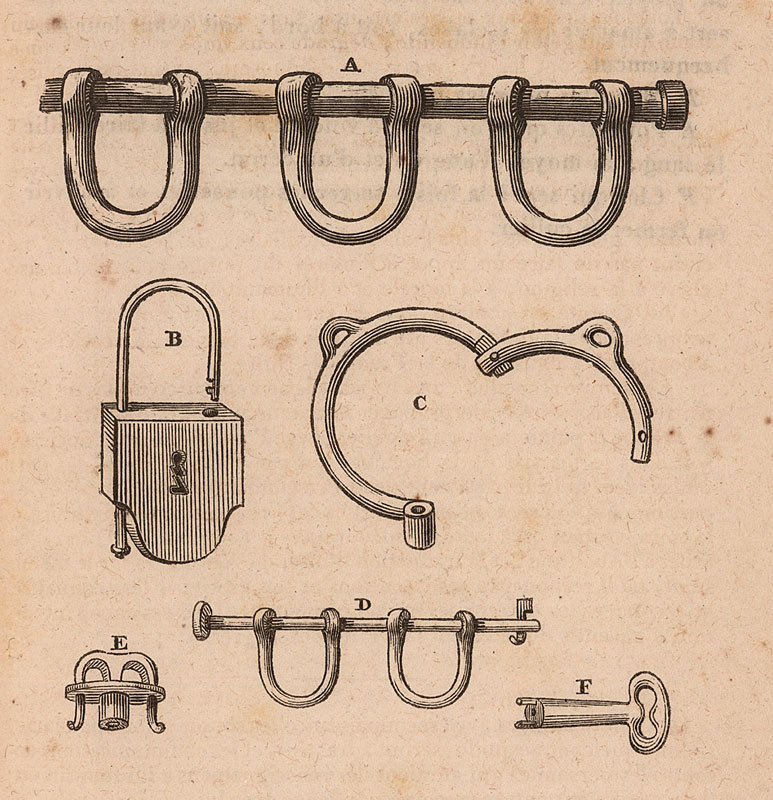 "Shackles, Manacles, and Padlocks Used in the Slave Trade, early 19th cent.," Faits relatifs a la traite des noirs, published by the Société de la morale Chrétienne, Comité pour l'abolition de la traite des noirs, Paris, 1826, courtesy of the Virginia Foundation for the Humanities and the University of Virginia Library. Almeida had to purchase additional equipment to add to the Putnam (later the Echo) for holding human cargo, including shackles.

Antonio Almeida organized the Putnam’s second voyage from New Orleans in 1858. A Portuguese native, Almeida was a member of the New York merchant firm Abranches, Almeida and Co., which was a branch of the Portuguese Company. By the late 1850s, New Orleans ranked as the United States’ second illegal slaving entrepôt after New York. A large part of the city’s traffic was conducted through agents of New York slave traders such as Almeida who used New Orleans as a regional outpost. Although a smaller port than New York with no legitimate trade with Africa, New Orleans held two advantages. First, there was little public pressure or local government interest in suppressing the trade in New Orleans. Second, New Orleans’ proximity to Cuba proved convenient for planning illegal slaving voyages.

Almeida’s first task for planning the second slaving voyage of the Putnam was securing U.S. registration papers for the brig. On November 27, 1857, Almeida arranged for Edward Townsend, a Rhode Islander and experienced slave trade captain, to purchase the brig with Almeida’s funds at the New Orleans Custom House. This was a typical maneuver in the illegal slave trade. Since the War of 1812, the U.S. government had refused to approve any treaty giving other nations the right to search American owned vessels—even illegal slave ships. This meant that by having Townsend purchase the brig, the slave traders could, in theory, sidestep every foreign cruiser patrolling the African coast and the Caribbean. Slave traders often completed these title transactions in Havana, Cuba, but in 1857, the U.S. Consul was refusing to give sailing papers to suspected slave traders. Almeida found that the Custom House in New Orleans had no such qualms.

On January 29, 1858, after a few days sail from New Orleans, Almeida arrived in Havana, Cuba. He quickly began securing funds to support the Putnam’s two trans-Atlantic voyages from New Orleans to Cabinda, and then from Cabinda to Cuba. Financing a slaving voyage was expensive. Costs included purchasing the vessel and additional equipment for holding human cargo, as well as paying the captain and crew above-normal seafaring rates to participate in the illegal trade. In addition, after purchasing captives in Cabinda and carrying them across the Atlantic Ocean, Almeida had to arrange bribes for Cuban officials to ignore the slaves’ disembarkation.

Despite these initial costs, the financial rewards were potentially huge. Slave prices were low in Africa, but high in Cuba, which created profit rates for investors averaging ninety-five percent. For investors, the major risk during the illegal slave trade was the capture of a ship by anti-slave trade patrols, but they were also concerned about losses from shipwreck, slave rebellion, and slave mortality. Investors mitigated these risks by pooling resources and providing funds on a share basis. Typically, one illegal slave trade voyage involved twenty or thirty shareholders. Almeida and his associates in New York, Cuban merchants and plantation owners, and Portuguese slave dealers on the Angolan coast were most likely the investors for the Putnam’s 1858 voyage. 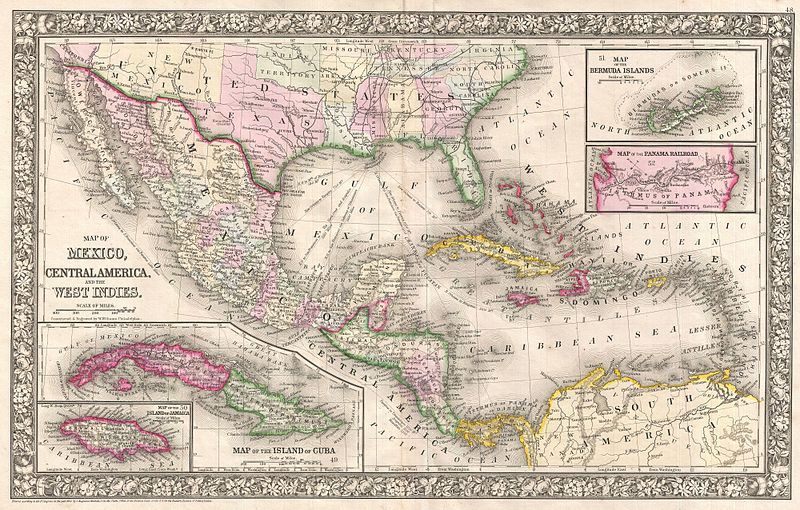 Map of Americas and the West Indies, created by Samuel Agustus Mitchell, 1866, courtesy of Geographicus Rare Antique Maps. In the nineteenth century, New Orlean's proximity to Cuba made the city ideal for arranging illegal trans-Atlantic slave voyages and sales.

While in Cuba, Almeida also made arrangements for the Putnam’s return voyage from Africa. Working with contacts that could help him navigate local requirements, Almeida drew up a schedule that would allow his Cuban partners to be ready to receive the slaves six months later in August 1858. They selected Sagua la Grande on the northern coast as a suitable landing place and agreed that the Echo’s crew would hoist a flag with a black stripe to identify themselves to the reception party on the shore.

Almeida returned to New Orleans on February 17, and prepared the Putnam for sail. Manning the brig was a priority. Hiring too many men meant higher costs, but hiring too few risked the vessel being overcome during a slave insurrection. Fear of revolt meant slave voyages required more men than vessels carrying legal cargos. Within two weeks Almeida gathered a generous crew of sixteen men to accompany him as the supercargo, or manager, and Townsend as the “owner” and captain. Typical of the illegal slave trade, most of the Echo’s crewmembers were Spanish and Portuguese sailors who had been on previous trans-Atlantic slave trading voyages. Almeida promised the Iberians $900 for four months work, which was far above normal rates for mariners. The Putnam also had two American crewmen who later claimed Townsend had duped them in New Orleans. One declared he was hired at a paltry $18 per month on the basis that the Putnam would trade with the Danish West Indies. Apparently, he was far out to sea when he realized the voyage’s true purpose.

Before departure, Almeida hired the New Orleans merchant firm Goldenbow and Lesparre to fill the Putnam’s hold with slave trade equipment, including extra wood to construct a slave deck at sea, and boilers for cooking slaves’ food on the return voyage. In early March, Almeida also had Goldenbow and Lesparre obtain clearance for the Putnam at the U.S. Custom House for a voyage to St. Thomas in the Danish West Indies—a false destination chosen to avoid suspicion. In case U.S. anti-slave trade patrols did get wind of the ruse at a later date, Almeida had the brig disguised. As the vessel meandered out of port on March 6, 1858, the crew painted over the name Putnam and nailed a wooden board to the stern. Upon it read the name Echo.