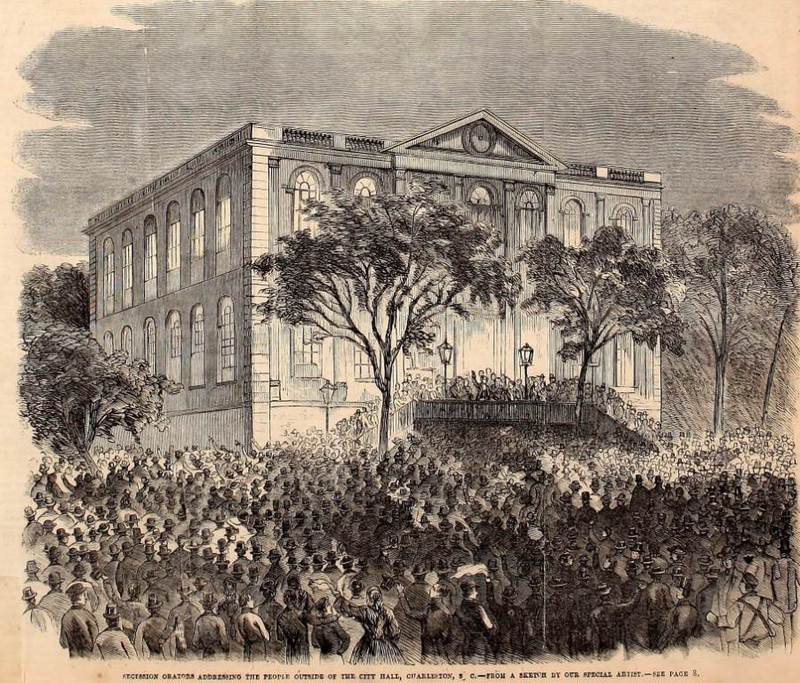 "Secession Orators Addressing the People Outside of the City Hall," Charleston, South Carolina, in Frank Leslie's Illustrated Newspaper, November 24, 1860, Charleston Museum Illustrated Newspapers Collection, courtesy of the Charleston Museum. By the late 1850s, the nation was deeply divided over the future of slavery. Just a few years after the Echo trials, South Carolina seceded from the Union and launched the Civil War. 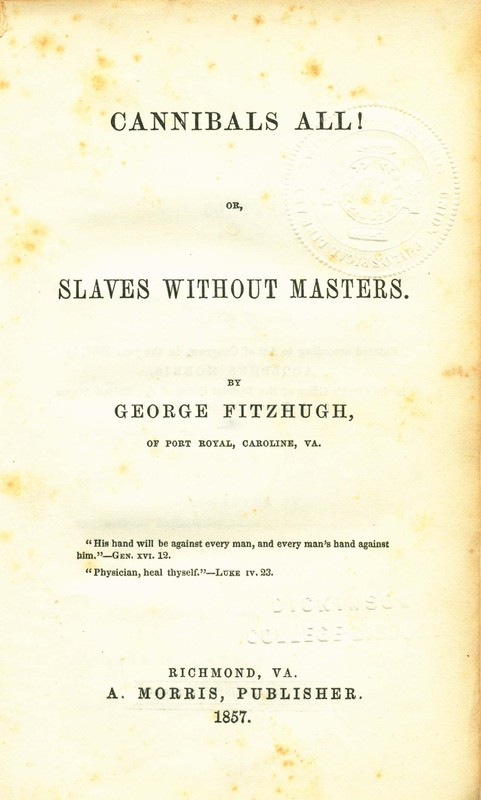 Title page, Cannibals all! or, Slaves without Masters, written by George Fitzhugh, 1857, courtesy of the Library of Congress. Like Leonidas Spratt, Fitzhugh uses a paternalistic argument in this pro-slavery publication to assert that enslaved African Americans were "happy and free" due their supposedly "virtuous masters." 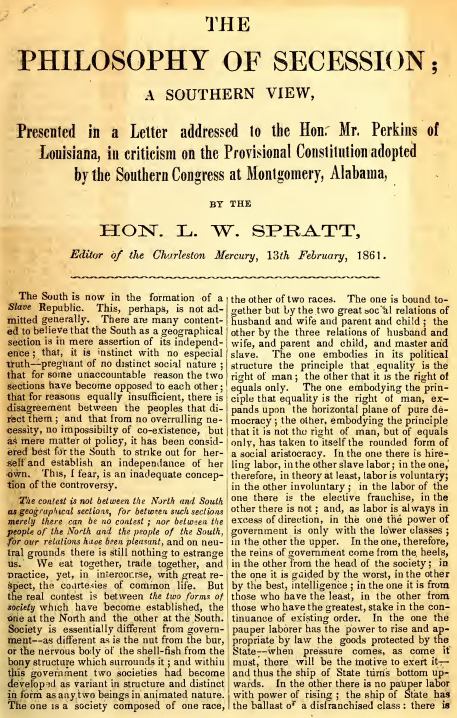 The Philosophy of Secession, A Southern View, by Leonidas W. Spratt, Charleston, South Carolina, February 1861, courtesy of University of North Carolina at Chapel Hill. As this document indicates, most ‘"reopeners" such as Spratt were also secessionists.

After interception, Almeida, the crew, and the Echo captives each had separate fates. Almeida escaped the Dolphin and within a few weeks he returned to New York. The Echo investors, including Almeida, suffered major financial losses on the Echo voyage. According to a Cuban merchant in New York, Emilio Sanchez, the merchant firm Abranches, Almeida and Co. was now “very shaky.” Meanwhile, the Echo and its crew were sent to Charleston, South Carolina for adjudication under U.S. federal anti-slavery law. Before the trials started, the U.S. Marshal sold the brig—once again named Putnam—at auction, and it returned to legal commerce. The crew had narrowly missed on a financial windfall, and in November 1858 they went on trial for their lives.

The Echo’s imprisoned crew arrived in Charleston at a time of extraordinary tensions over the future of slavery in the United States. Two contemporary debates—both beyond the crew’s control—shaped the course of their trials. The first took place between white Charlestonians, and concerned the virtues of reopening the trans-Atlantic slave trade to the South. In 1853, a “reopening” movement had begun under the leadership of Leonidas Spratt, an influential Charlestonian newspaper editor. By the summer of 1858, Spratt’s cause was receiving regional attention, though its base remained centered in the South Carolina Lowcountry. Reopeners advanced three main arguments to support their position. First, reopening meant lower slave prices, which would theoretically extend slaveholding to poor whites. Second, since chattel counted towards Congressional representation, more slaves would boost the South’s voice in Washington D.C. Third, Spratt mobilized the contemporary pro-slavery argument of paternalism to assert that reopening would rescue captives from the “heathenism” and “depravity” of Africa, and lead them to “civilization” and Christianity on southern plantations. To Spratt and his supporters, reopening the slave trade would be a boon for all: for whites, for the South, and even for African slaves. He believed that the Echo case would surely prove these theories to be true.

The second major debate stemmed from local and regional concerns that the federal government was placing limits on domestic slavery and the thriving U.S. domestic slave trade. According to many southern politicians and writers, slavery’s “natural” westward expansion was under threat from an increasingly hostile abolitionist movement that had infiltrated the federal government. The recent national debate and volatile conflicts over Kansas’s entry into the Union as a slave or free state brought their fears to life. These concerns moved some white southerners to extreme positions. By the time the Echo sailed into Charleston, many of its leading citizens were prepared to defend slavery in any form, and to invoke a “higher lawism,” which raised the righteousness of slavery above the proscriptions of federal law. Many South Carolinians viewed the Echo trials—set to take place in South Carolina’s federal courts—as ideal opportunities to rebuke the national government on the issue of slavery.

The first battle over the Echo took place in Charleston and concerned the fate of the ship’s captives. Since the Act of 1807—which banned the U.S. Atlantic slave trade starting in 1808—the federal government had created additional laws to suppress the trade, in 1818, 1819, and 1820. These Acts addressed several issues, including the punishments meted out to Americans convicted of slave trading offences, as well as what should happen to the captive Africans that U.S. cruisers found aboard slave ships. Section two of the Act of 1819 clearly required President Buchanan to send the former captives back across the Atlantic, but many Charlestonians were determined to prevent this from happening. South Carolina newspapers such as the Charleston Mercury, the Carolinian, and the Southern Guardian argued against the law and demanded that the Africans be retained as slaves. Some wealthy planters even offered large sums to purchase the Echo Africans. Underpinning these efforts was an argument, widely supported by southern whites, that southern slavery actually benefited blacks. According to this paternalistic view, southern plantations nurtured slaves—so where better to send the bedraggled Echo Africans for recuperation? To that end, Spratt petitioned U.S. Marshal Daniel Hamilton to release the Echo Africans from his protection at Fort Sumter. Hamilton refused. After three weeks of intense local pressure, the U.S.S. Niagara carried the Echo Africans out of his jurisdiction to Liberia. 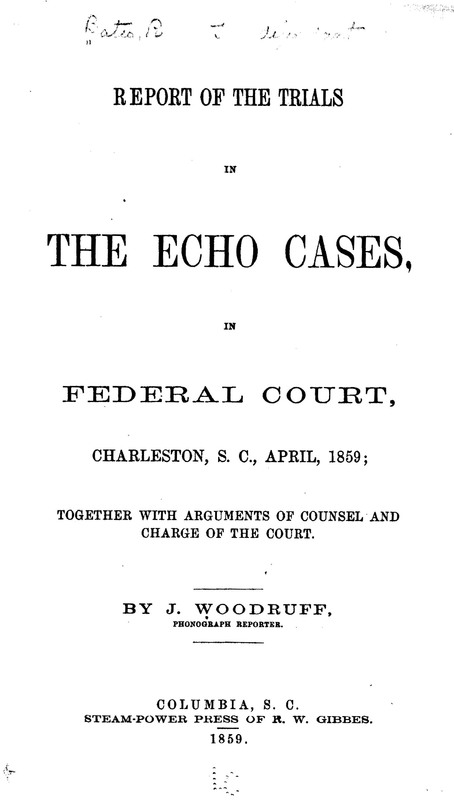 Report of the trials in the Echo cases, in federal court, Charleston, S.C., April, 1859: together with arguments of counsel and charge of the court, 1859, courtesy of the Library of Congress, American Memory Collection. 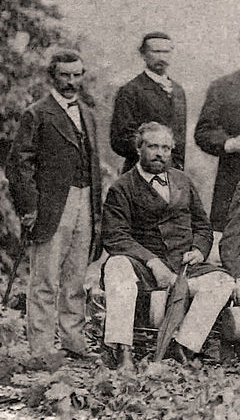 The trials of the Echo crew were the next fight for the pro-slavery agitators. The crew was to be tried under sections four and five of the Act of May 15, 1820, which stated that American participation in the slave trade was an act of piracy. The law charged the prosecution first with proving that the crew had engaged in the illegal slave trade, and second that they were U.S. citizens or at least had served aboard a slaver owned by a U.S. citizen. If convicted, the penalty was death. Still, the law unintentionally provided the Echo crew with a potential lifeline: cases were to be heard at “the circuit court of the United States for the district wherein [the suspect] may be brought or found.” This meant that the trial would take place in Columbia, South Carolina’s capital and a radical pro-slavery stronghold like Charleston.

U.S. District Attorney James Conner, who prosecuted the trial, was fully aware of how a slave trade trial in Columbia would unfold. “The feeling in Columbia is very strong against the prosecution,” he wrote to the U.S. Attorney General in Washington before the trial began. A jury of white males from Columbia, Conner believed, “would refuse to convict these men [even] on full proof.” As it turned out, he did not even get the chance to present evidence; when Judge James Moore Wayne delivered three indictments against the crew under the Act of 1820, the jury found no bill against the prisoners.

Justice Wayne granted Conner a retrial in Charleston in April 1859. As in Columbia, Spratt took up counsel for the defense. This time a trial did take place, but again Conner’s position was hopeless. Although Conner prosecuted the case ably, verifying the Echo’s ownership by Townsend and extracting convincing testimony from the Dolphin’s crew, he was trumped by Spratt’s emotive and ideologically driven appeals to the jury. According to Spratt, the constitutionality of the Act of 1820 was up for debate. Indeed, it was “not only the right, but the duty of the jury, to consider and decide” its constitutionality. In Spratt’s view, by forcing southerners to convict the slave traders, the South’s enemies had entered “the temple of justice” and were asking the jury to sacrifice the prisoners and thereby mark their “own degradation and humility.” After ninety minutes of deliberation the jury returned a verdict of “not guilty” and all sixteen prisoners were released.

The fate of the Echo’s captain, Edward Townsend, was similar to his crew. When the Dolphin captured the Echo, the frigate carried Townsend to Key West where he was eventually tried under the Act of 1820. In this case, Judge Marvin directed the jury to return a verdict of not guilty, surmising that a certified copy of the Echo’s registry did not confirm Townsend’s ownership. It was a blatantly minor technicality, but Townsend was released. Within a year he was heading back to Africa aboard another slaver. 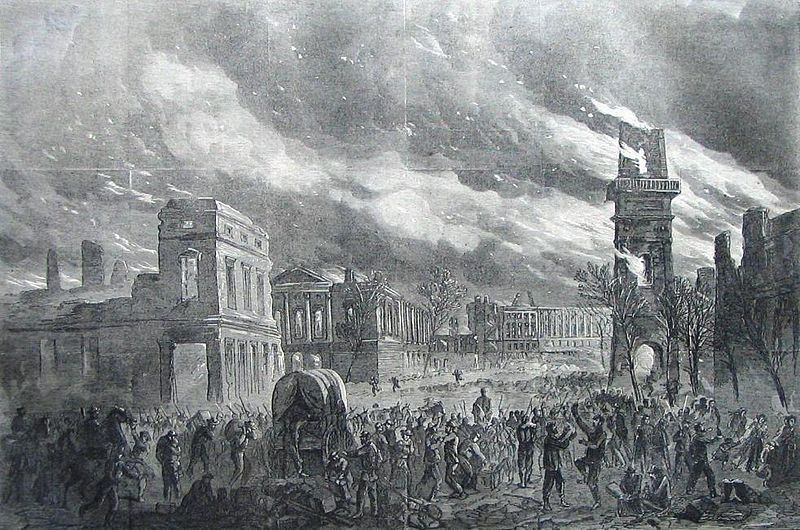 The Burning of Columbia, February 17, 1865, a wood engraving sketched by William Waud of Columbia, South Carolina, published in Harper's Weekly on April 8, 1865, courtesy of the Library of Congress. U.S. District Attorney James Conner attempted to prosecute the first trial of the Echo in Columbia, South Carolina's capital city. Like Charleston, pro-slavery sentiments were strong in Columbia, and the white male jury refused to convict the crew of the Echo for working on an illegal trans-Atlantic slave ship. A few years after the trials, South Carolina seceded from the Union to protect slavery, and by the end of the Civil War Union troops had destroyed much of Columbia.

← Interception of the Echo
Conclusion →