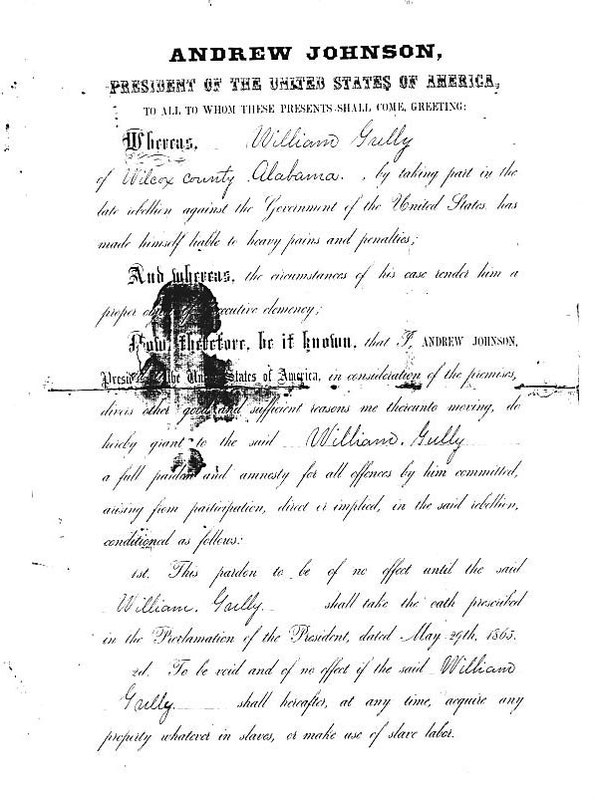 "By the President of the United States of America: A Proclamation," No. 37, President Andrew Johnson,

May 29, 1865, courtesy of Manuscripts Division, Library of Congress.

The following educational document corresponds with Unit One: Giving Meaning to Freedom in the After Slavery exhibition. Note the "Questions to Consider" section included at the end of the document.

Context
Among the most prominent of those who contributed to the debate about freedom and its meaning in the wake of the Confederate surrender was the President of the United States himself: Andrew Johnson, who assumed the highest office in the nation after the assassination of Abraham Lincoln on April 14, 1865. With Congress in recess until December and peace scarcely restored in the former Confederacy, Johnson found himself in a position to act not only immediately, but with unusual autonomy. Determined to return the nation to its former state as quickly as possible, he issued two proclamations on May 29th. The first, which quickly came to be known as the "Amnesty Proclamation," opened the way by which individual former Confederates could be restored to citizenship in the nation. The process moved quickly. By late summer, even those thousands of former rebels who fell into one or another of the fourteen exempted classes were applying for and receiving pardons from the nation's chief executive. (For an example of a pardon application, see J.B. Stitton's petition in Educational Documents for "Planters, Poor Whites & White Supremacy.")

WHEREAS the President of the United States, on the 8th day of December, A. D. eighteen hundred and sixty-three, and on the 26th day of March, A. D. eighteen hundred and sixty-four, did, with the object to suppress the existing rebellion, to induce all persons to return to their loyalty, and to restore the authority of the United States, issue proclamations offering amnesty and pardon to certain persons who had directly or by implication participated in the said rebellion; and whereas many persons who had so engaged in said rebellion have, since the issuance of said proclamations, failed or neglected to take the benefits offered thereby; and whereas many persons who have been justly deprived of all claim to amnesty and pardon thereunder, by reason of their participation, directly or by implication, in said rebellion, and continued hostility to the government of the United States since the date of said proclamations, now desire to apply for and obtain amnesty and pardon:

To the end, therefore, that the authority of the government of the United States may be restored, and that peace, order, and freedom may be established, I, ANDREW JOHNSON, President of the United States, do proclaim and declare that I hereby grant to all persons who have, directly or indirectly, participated in the existing rebellion, except as hereinafter excepted, amnesty and pardon, with restoration of all rights of property, except as to slaves, and except in cases where legal proceedings, under the laws of the United States providing for the confiscation of property of persons engage in rebellion, have been instituted; but upon the condition, nevertheless, that every such person shall take and subscribe the following oath, (or affirmation,) and thenceforward keep and maintain said oath inviolate; and which oath shall be registered for permanent preservation, and shall be of the tenor and effect following, to wit:

The following classes of persons are excepted from the benefits of this Proclamation:

1st. All who are or shall have been pretended civil or diplomatic officers, or otherwise domestic or foreign agents, of the pretended confederate government;

2d. All who left judicial stations under the United States to aid the rebellion;

3d. All who shall have been military or naval officers of said pretended confederate government above the rank of colonel in the army or lieutenant in the navy;

4th. All who left seats in the Congress of the United States to aid the rebellion;

5th. All who resigned or tendered resignations of their commissions in the army or navy of the United States to evade duty in resisting the rebellion;

6th. All who have engaged in any way in treating otherwise lawfully as prisoners of war persons found in the United States service, as officers, soldiers, seamen, or in other capacities;

7th. All persons who have been, or are, absentees from the United States for the purpose of aiding the rebellion;

8th. All military and naval officers in the rebel service, who were educated by the government in the Military Academy at West Point or the United States Naval Academy;

9th. All persons who held the pretended offices of governors of states in insurrection against the United States;

10th. All persons who left their homes within the jurisdiction and protection of the United States, and passed beyond the federal military lines into pretended confederate states for the purpose of aiding the rebellion;

12th. All persons who, at the time when they seek to obtain the benefits hereof by taking the oath herein prescribed, are in military, naval, or civil confinement, or custody, or under the bonds of civil, military, or naval authorities, or agents of the United States as prisoners of war, or persons detained for offences of any kind, either before or after conviction;

13th. All persons who have voluntarily participated in said rebellion, and the estimated value of whose taxable property is over twenty thousand dollars;

14th. All persons who have taken the oath of amnesty as prescribed in the President's Proclamation of December 8th, A. D. 1863, or an oath of allegiance to the government of the United States since the date of said Proclamation, and who have not thenceforward kept and maintained the same inviolate. Provided, That special application may be made to the President for pardon by any person belonging to the excepted classes; and such clemency will be liberally extended as may be consistent with the facts of the case and the peace and dignity of the United States...

1. In the first paragraph of the proclamation, President Johnson makes reference to his predecessor's 1863 and 1864 offers of amnesty to those then in rebellion. Why would Johnson do this? Who is he speaking to in this passage, and what does its inclusion tell us about the national political climate in May 1865?

2. What conditions does President Johnson attach to amnesty? What must each applicant expect to do or give up in return for full citizenship rights?

3. What does President Johnson promise to give each application on receipt of amnesty?

4. In what ways do the terms of this proclamation affect relationships between former slaves and former slaveholders?

5. What kinds of freedom (or freedoms) are foreclosed on by President Johnson's Amnesty Proclamation?

Return to Exhibit: Unit One