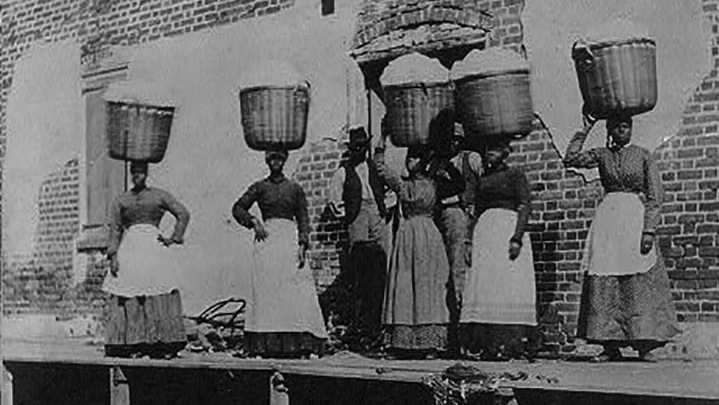 "Cotton Warehouse, Carrying Cotton," Charleston, South Carolina, ca. 1879, courtesy of the Library of Congress, Prints and Photographs Division. In the late nineteenth century, Charleston’s population was roughly half black and half white. Many people of both races were employed by businesses that shipped cotton through Charleston Harbor, including these African American women working at a cotton warehouse. Cotton factory workers, however, were typically white. In the 1890s, the management of Charleston's cotton mill made an unprecedented move to cut costs by drawing from Charleston's significant black population to replace most of their white workforce. To keep wages low, they again mostly recruited women.

In early 1888, the Charleston Manufacturing Company reorganized to become the Charleston Cotton Mills. In 1892, the new management considered moving the machinery to Lockhart Shoals in Union County, South Carolina, and selling off the buildings and land in Charleston. Instead, they continued operating the mill, and Charleston Cotton Mills merged with the O.H. Sampson Company of Boston in 1894. The new company continued to acquire property and to pay small dividends annually. But another sharp rise in the price of unprocessed cotton affected all textile factories, including the Charleston Cotton Mills, and the mortgage was foreclosed in 1896. The company changed hands again, though it did not change its name.

In 1897, ten years after the idea of hiring black workers was first proposed, the new management of Charleston Cotton Mills made a bold and unprecedented move by replacing most—but not all—of their white workforce with African Americans, again mostly women. The factory was able to pay black operatives one-third the wages that white workers had received. 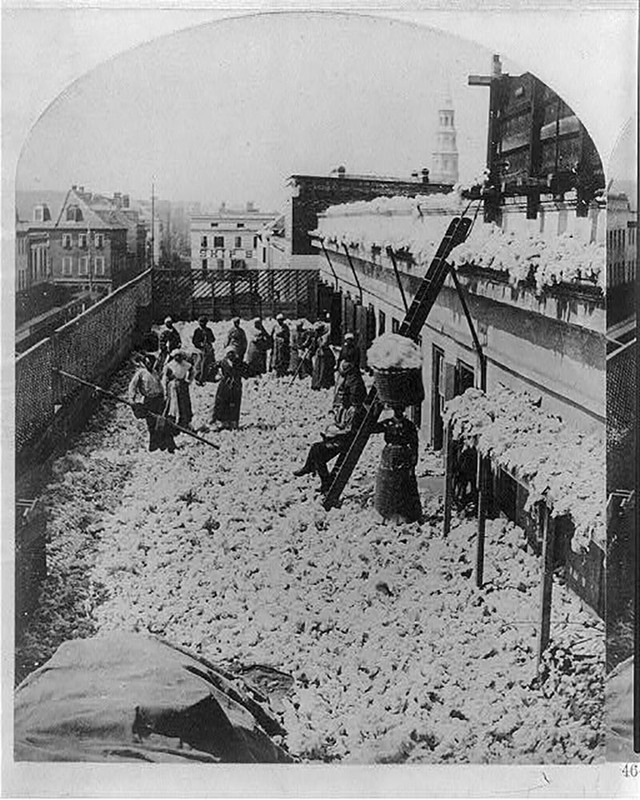 The Charleston News and Courier called the shift “an important, maybe a dangerous, experiment.” Three hundred white operatives, mostly women and children, were let go, though some white workers kept their jobs. This meant the Charleston Cotton Mills would have a racially mixed workforce. In response, the male friends and relatives of the former workers threatened to attack the new workforce as well as the new management, which was headed by German-born merchant and banker Charles Otto Witte. These angry white men posted handbills around the city and wrote an indignant public letter intended for the local newspaper. In language that pitted black and white workers against each other, they railed, “Who could read the history of Charleston and predict she would be the first city in the western world to produce a negro-loving cotton mill president, the first to . . . mix whites and blacks in a southern mill; the first to repudiate social distinction in labor and subject the young, beautiful and innocent of our Southland . . . . to competing for bread at the side of the uncouth Africans?” President Witte, the letter went on, proposed “to put the blacks and whites, male and female, side by side, under one roof, thereby opening the doors to amalgamation and bastardization.”  The men whose wives and daughters had lost their jobs swore “not to sit supinely by and witness this negro hoarde [sic] turned loose upon the pursuits of our mothers, our wives, our widows, our daughters, our sisters, and rob them of their living.” The relentlessly pro-business News and Courier refused to print the letter, but it appeared in the Columbia State newspaper on June 17, 1897.

The News and Courier did report some three months later, on August 25th, that a group of black men gathered at the mill every afternoon that summer at closing time to escort their wives, daughters, and girlfriends home from work. Management hired security guards, including a black former officer of the Charleston city police force, James Fordham, a twenty-five-year veteran who had been “retired” when the city joined the state and the rest of the South in removing black men from positions of power. At least once during that long hot summer, on August 25th, the police were called in when a fight broke out between these two groups of men, both of which saw themselves as protecting vulnerable women.

At almost the same time, in August 1897, Atlanta Mills in Atlanta, Georgia hired a few black workers to fill out its workforce. Fifteen hundred white workers went on strike to protest the presence of just eight black women—and unlike the Charleston protesters, they succeeded in having all the black women dismissed.

The conflict over black labor had ramifications that reached beyond the factory floor. Concern for the young children of white female workers had led the King’s Daughters, a Methodist organization dedicated to improving the lives of poor families, to open a free school in the factory yard in 1890, an institution that became known as “the Factory Kindergarten.” When the mill began to hire black workers seven years later, there was no talk of opening the kindergarten to African American children. Instead, the women in charge concluded that the school should be closed. After much discussion, however, they decided that the need for early childhood education in the neighborhood was just as great as it had ever been. They changed the name, removing the word “factory,” and continued teaching white children on the premises.

By the end of summer 1897, at least forty of the fired white workers had given up the fight to get the factory to fire its black workers and rehire the white ones. These workers accepted another factory’s offer to hire them and pay their train fare, though the agent for the factory refused to tell the News and Courier where that factory was located. Around the same time, two black men who claimed to be from Charleston showed up at a cotton factory in King’s Mountain, North Carolina, and applied for jobs. They were turned away. Nevertheless, a mob of outraged white factory workers went out after dark determined to hunt these men down to make them pay for challenging the color line. The hopeful workers had already left town, but the indignation their inquiry had sparked made national news.

For the next two years, management at Charleston Cotton Mills continued to insist that all was well, that the factory was making money and operating smoothly. Then, all of a sudden, in 1899, it was no longer possible to conceal the truth: the company was bankrupt again.