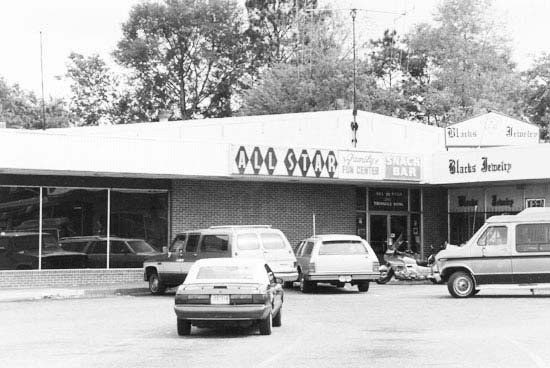 All Star Bowling Lanes, Orangeburg, South Carolina, 1995, image by Steven A. Davis, courtesy of the National Register of Historic Places program at the S.C. Department of Archives and History.

By February 1968, most of the public spaces in the city of Orangeburg were integrated except for All Star Bowling Lanes and the Orangeburg Regional Hospital. The bowling alley had become a focal point for protests led by black residents in Orangeburg, as well as students from South Carolina State and Claflin Colleges, because these two historically black colleges stood within walking distance of the establishment. Members of the black community made several attempts to broker a deal with the bowling alley manager, Harry Floyd, to integrate the business  — but to no avail. Floyd insisted the alley was a private business with no obligation to desegregate. Contrary to his claims, the presence of a lunch counter in the bowling alley meant that it was tied to interstate commerce, where federal law demanded integration. On Monday evening, February 5th, a group of African American South Carolina State students went to All Star and sat at the lunch counter in protest. John Stroman, an organizer from a student group called the Black Awareness Coordinating Committee (BACC), helped lead these student protestors. The local police were called and Floyd closed the business for the night. The students went home and no one was arrested.

The next evening several students returned; this time they planned to get arrested so that the issue could be resolved in court. Word spread quickly after local police arrested them and hundreds of African American students poured into the bowling alley parking lot. A fire truck arrived at the scene and tensions mounted. The growing crowd shattered a window in front of the bowling alley, and law enforcement used force to beat back and disperse students. As they ran back to campus, some students broke shop windows and damaged cars. That night, eight students and one officer were admitted to the hospital with injuries.

On Wednesday, February 7th, Orangeburg Mayor E.O. Pendarvis and city manager Bob Stevenson attempted to address students at South Carolina State College, but were hooted off the stage. Students expressed anger over the response from law enforcement the night before, and towards city officials who they believed were not taking their demands seriously. The students requested a permit from city officials to march in protest, and were denied. They also submitted a list of demands, which included integrating the bowling alley, drive-in movie theaters, and the Orangeburg Regional Hospital, and called for an end to police brutality and the establishment of a biracial human relations committee. Meanwhile, the National Guard and the South Carolina Highway Patrol set up roadblocks around the colleges, and students were not permitted to leave the campus.