About the Online Tribute 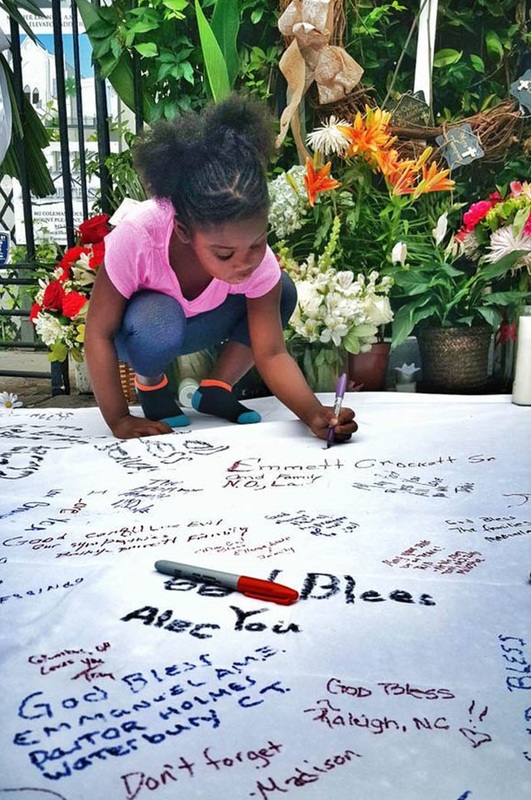 A young girl signs one of several posters put up in the weeks following the mass shooting at Emanuel AME Church, June 25, 2015, Charleston, South Carolina, courtesy of ABC New4 WCIV-TV.

In the days and weeks following the tragic mass shooting at the Mother Emanuel Church on June 17th, 2015, visitors left vast amounts of memorabilia items in front of the church, and individuals and organizations from across the nation sent items by mail. In response, Mother Emanuel Church leaders worked with City of Charleston representatives and professionals from local archival repositories and historic institutions to form a Memorabilia Sub-Committee. These volunteers organized efforts to maintain and preserve the numerous memorabilia items, which included flowers, letters, candles, quilts, prayer shawls, and artwork, as well as banners, posters, and plywood boards covered in signatures and messages of support. In addition, members of this sub-committee decided to work with Lowcountry Africana, the Lowcountry Digital History Initiative (LDHI), and the College of Charleston's Avery Research Center for African American History and Culture to develop an online tribute to highlight images of the memorabilia left in front of the Mother Emanuel Church each day, as well as images of local, statewide, and national responses to the mass shooting. The 2015-2016 LDHI staff worked with Toni Carrier from Lowcountry Africana to acquire the various visual resources presented throughout “A Tribute to the Mother Emanuel Church.” Sources for these images include professional photographers as well as individuals on social media sites such as Twitter, Instagram, Flickr, and Facebook. These individuals graciously gave permission for the use of their work. In addition, several news media outlets generously granted permission for the use of their images in this online tribute. Image copyrights are retained by the individual photographers and media sources. Representatives from the Mother Emanuel Church (see below) provided editorial input throughout the development of this online tribute.

Project Partners
In partnership with the Mother Emanuel Church (including the Mother Emanuel Church Memorabilia Sub-Committee), this online tribute is co-curated by Lowcountry Africana, the Lowcountry Digital History Initiative, and the College of Charleston's Avery Research Center for African American American History and Culture. The project is funded in part by the College of Charleston’s Race and Social Justice Initiative. Launched through funding support from Google, the mission of the Race and Social Justice Initiative (RSJI) at the College of Charleston is to promote public awareness and dialogue about race and social justice issues in the Charleston area, the state of South Carolina, and beyond, through a collaborative effort led by the Avery Research Center for African American History and Culture, Addlestone Library, the African American Studies Program, the Lowcountry Digital History Initiative, and multiple community partners.

Editorial Contributors
The text for this online tribute was written by Mary Battle, Public Historian at the Avery Research Center and Co-Director of the Lowcountry Digital History Initiative, with editorial and curatorial input from the following contributors: