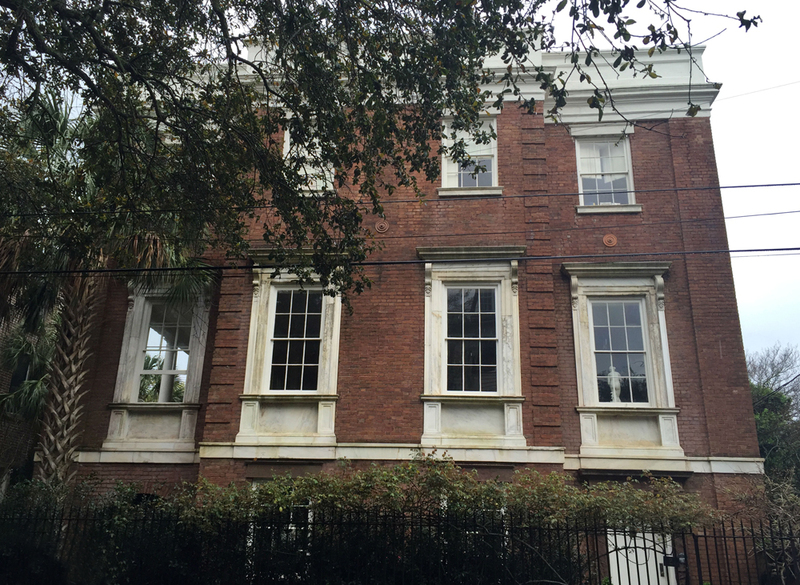 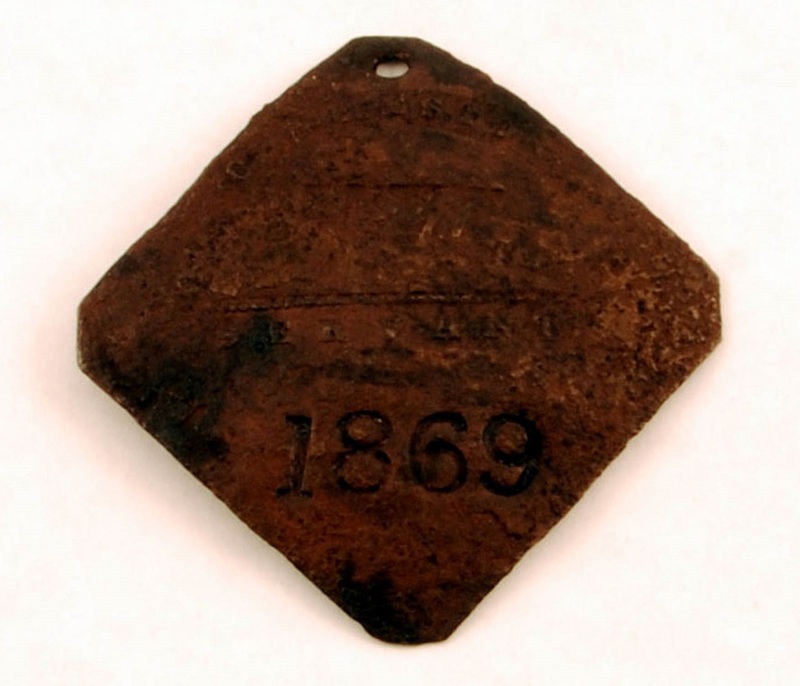 Copper slave badge imprinted 'Charleston 1840 Servant 1869', Walter Pantovic Artifact Collection, courtesy of the Avery Research Center. Beginning in the mid-eighteenth century, Charleston laws mandated enslaved African Americans to wear identifying badges, or tags, when they were hired out by their owners. These badges contained information such as the city, year, occupation and identifying number.

As an enslaved cook in the urban center of Charleston, Fuller primarily provided meals for his owner, William C. Gatewood, and his owner’s family, as well as Gatewood’s numerous elite guests. In contrast, a cook on a rural plantation would have been trained to provide meals for enslaved field workers as well as elite planter families and guests. For this reason, slave sale notices in Charleston newspapers clearly distinguished between cooks who worked in the country and those intended for work in town. Under the supervision of their slaveholders, a plantation cook excelled through the consistency of her preparations and her economy; an urban cook for elite households excelled in the abundance of ingredients, and in her ability to maintain the latest culinary fashions and technological innovations in the kitchen. The best city practitioners were designated “complete cooks,” and their skills commanded such respect that free cooks won a regular clientele. In some cases, enslaved cooks could even be “hired out” and potentially accumulate their own money.

For a decade after Gatewood purchased Fuller, the young Fuller lived in his owner’s Charleston townhouse with one other enslaved female housekeeper. During this time, Gatewood expanded his connections in Charleston and beyond. His lottery company became involved in underwriting railway projects and steam packet lines, which connected him to transportation businesses across the U.S. South. In addition, Gatewood diversified his business interests, and he even purchased the Charleston Theatre. He also joined the South Carolina Militia, enlisting in the 17th Regiment of the Sumter Guards, and in 1835 he was elected ensign of the unit. Next, Gatewood joined the Grand Lodge of the Ancient Free Masons of South Carolina, and in 1840 he was appointed one of the Lodge stewards. Gatewood’s growing social network provided ample opportunities for Fuller to present his culinary skills to the elite citizens of Charleston. In 1843, Gatewood also built a larger townhouse on Legare Street, where Fuller prepared many formal dinners. Gatewood’s enslaved property grew along with his status—the 1850 census indicates that five adult male slaves and five adult female slaves operated Gatewood’s urban mansion.

Gatewood ultimately supported Fuller’s culinary training starting in the 1820s, and in 1852, he agreed to let him live outside of his household with his wife Diana Strobel Fuller. Throughout the slaveholding South, a small percentage of skilled slaves worked under the “self hire” system by agreeing to pay their masters a percentage of the money they earned on their own. In some cases, they could also live separately. 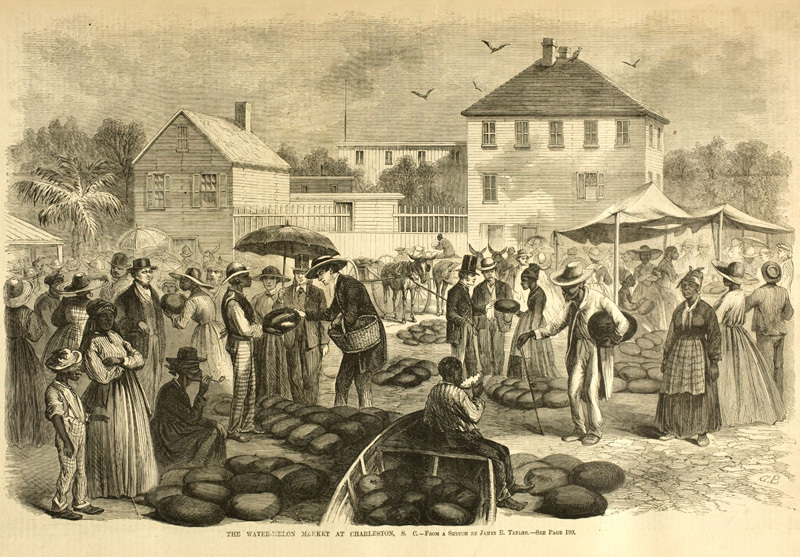 "The Watermelon Market at Charleston, S. C.," sketch by James E. Taylor, Frank Leslie's Illustrated Newspaper, 1866, courtesy of the Library of Congress Prints and Photographs Division. Working under the “self hire” system, some enslaved people could sell produce and goods at urban markets for profit. Contracts, either written or verbal, then determined how the profits were divided between the enslaved worker and their owner.

Annoucement of dinner served by Nat Fuller at the Medical Society, Charleston, South Carolina, Charleston Courier, June 12, 1855, courtesy of America's Historical Newspapers. Though he was still enslaved in the 1850s, Nat Fuller began catering elite social events in Charleston such as this dinner for the Medical Society. As a slave working for hire, Fuller would still have to share his profits with his owner, William C. Gatewood.

Why did Gatewood not free Fuller by legal manumission? As early as the 1820s, state and local legislation made it increasingly difficult for owners to individually grant freedom to enslaved people in South Carolina. In addition, Gatewood undoubtedly saw this arrangement as a way to profit financially, by allowing a talented slave to maximize his earning potential in the public marketplace. At the same time, Gatewood politically defended the free status of manumitted slaves in Charleston, and even became a signatory on a petition opposing a bill floated in the South Carolina legislature to expel free blacks from the state. Despite his political actions, through Fuller and the other individuals he held in bondage, Gatewood benefitted economically and socially from being a slaveholder.

After Fuller set up a separate business and residence, Gatewood helped by connecting Fuller with customers, supplying him with transport through his steam packet to secure game in New York, and finally by arranging a trustee relationship in June of 1860 that enabled Fuller to lease a building that would become his restaurant—the Bachelor’s Retreat. After Gatewood’s death of apoplexy in 1861, Fuller lost his chief financial backer. Gatewood’s widow Madeline, Fuller’s final owner before the end of the war, refused to provide similar assistance.