Selection from letter to John Muller from Nat Fuller, January 1866, Simons & Simons Case Records, 1835-1873, courtesy of the South Carolina Historical Society. Hand-written records from enslaved persons are often rare. By the nineteenth century, laws prohibited slaves from learning to read or write. As a highly skilled cook, Fuller may have learned to read and write to improve his skills in the kitchen.

After the war, Nat Fuller found that there were far fewer bachelors who survived the war and were in a position to return as clients to his restaurant. He again changed his business focus, and no longer prepared daily breakfasts, lunches, or dinners for boarders. Instead, he catered meetings and events exclusively. The Society of the Cincinnati resumed using his restaurant as its clubhouse in the summer of 1866. Fuller also began catering boat excursions in Charleston Harbor and along the coast. The last report of Fuller at work, from the Daily Constitutionalist in 1866, describes him making a cocktail known as the Brandy Smash:

Nat Fuller, the renowned presiding genius over many a fine dinner and
supper, has a cunning way of fixing up water so as to take all the bad taste
out of it. We did not get the exact receipt, but believe that ice, brandy, mint
and sugar are some of the condiments used. 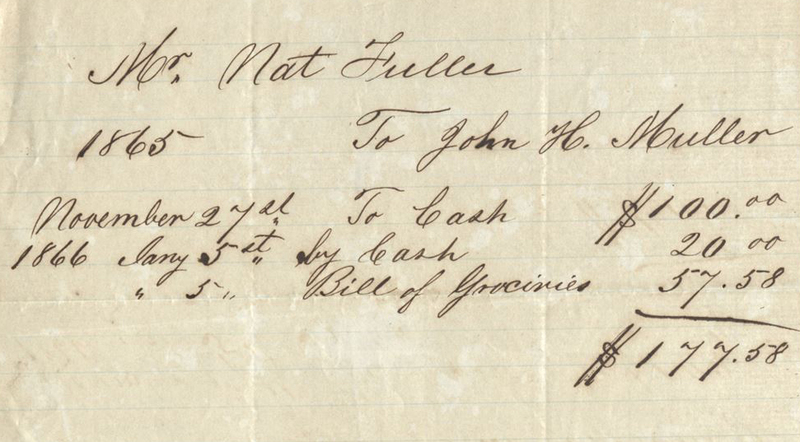 Grocery bill for Nat Fuller, 1865, Simons & Simons Case Records, courtesy of the South Carolina Historical Society. As an enslaved cook, Nat Fuller managed his culinary businesses while sharing profits with his owner, William C. Gatewood. After Emancipation, Fuller continued to manage his restaurant business as seen by the purchases above.

Nat Fuller died of typhoid fever on December 16, 1866. The onset of the disease was sudden, and his wife and four children were suddenly left to their own resources. Still, Fuller’s contributions to the culture of Charleston were not immediately forgotten. He left much to be remembered—gastronomic creations, a legacy of black entrepreneurship, and, like Sally Seymour and Eliza Seymour Lee, he passed on his skills to a number of African American chefs.

In particular, Fuller’s assistant, Tom R. Tully, became one of the most prominent black caterers of Reconstruction-era Charleston. Tully worked with Nat Fuller from the time he set up the game market. After Fuller’s death, Tully inherited his city market stalls, and sold venison, fowl, and New York celery from 1866 until the early 1880s. Tully had worked with Fuller in catering until 1859, when he accepted a partnership offer with a free black pastry cook named Martha Vanderhorst in her shop at 117 King Street. After his death, Tully also catered many of the society dinners once managed by Fuller.

Tully’s obligations to his mentor Nat Fuller were significant, and there are indications that he made recompense to Fuller’s survivors. Fuller’s widow, Diana, initially attempted to maintain her husband's business, but was forced to leave 78 Church Street in 1868. She moved to 10 Calhoun Street and supported their children, Rebecca, Diana, William H., and Maria through her pastry skills. Tully purchased a substantial portion of Nat Fuller’s catering equipment, and throughout the 1870s he also hired Diana Fuller as a skilled pastry cook on his catering staff. Meanwhile, Nat Fuller’s daughters grew up working as domestic servants. His son William H. Fuller became a barber.

Many of the places where Nat Fuller was trained, worked, sold game, and conducted his restaurant, as well as where he catered events, still stand in Charleston. His life as an enslaved man who became a skilled cook and eventually a prominent game marketer, caterer, and restaurateur is striking in the history of antebellum Charleston. In a southern city and major slave society bound by rigid race and class hierarchies, Fuller managed to develop multiple successful businesses and play a powerful role in the culinary history of the city. After becoming a self-hire in 1852, Fuller’s financial success was still tied to his former master, and to elite white customers who were often slaveholders. In the 1860s, many of his customers would join the Confederacy to maintain the unjust system of slavery he knew intimately. His opportunities to challenge or even question the world he operated in were most likely few, but in 1865, according to Porcher, he hosted a feast where whites and blacks toasted to “freedom.” In Charleston’s complex racial history, this event, and Fuller’s exceptional career, are significant to commemorate.