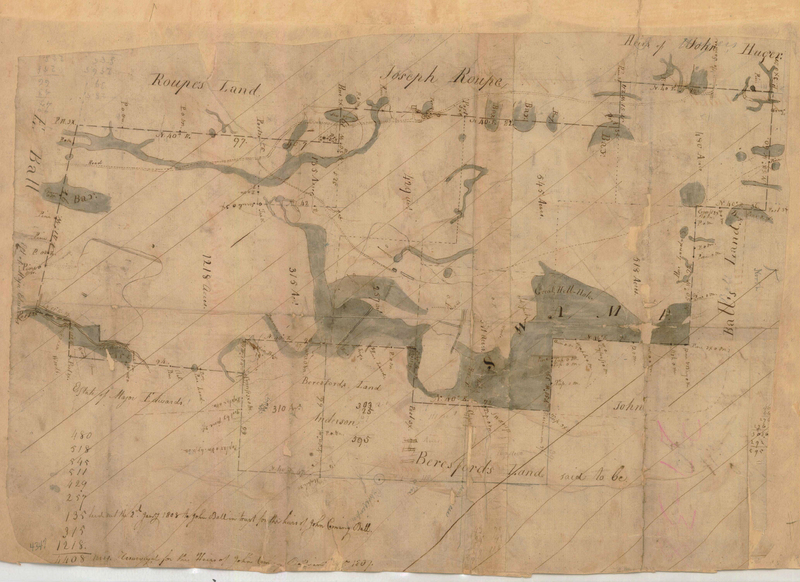 Examining the development and decline of inland rice on individual plantations provides insight into the various ways planters and slaves adapted the general cultivation model for inland rice to meet the demands of specific Lowcountry environments. Although inland rice plantations relied on reservoirs as a water source to irrigate their fields, methods to control water on and off the fields differed from plantation to plantation. The ability to control water also depended on the population of enslaved laborers to build and maintain ditches and embankments, and the management strategies of different planters.

Early Planters at Jericho
Jericho Plantation, located on the headwaters of the East Branch of the Cooper River, was a productive inland rice plantation from the mid-eighteenth century to the mid-nineteenth century. John Coming Ball and his son, John Coming Ball II, purchased an assortment of properties in the mid and late eighteenth century to assemble the 3527-acre Jericho Plantation. After the death of John Coming Ball II in 1792, executors rented Jericho to John Jaudon for six years for a price of £15 annually. In March 1810, Isaac Ball inherited Jericho. From 1810-1825, Isaac pieced together a 14,489-acre landholding that included Jericho, and stretched 8.5 miles through the Huger Creek watershed. After Isaac’s death in 1825, John Ball, Jr. managed the estate until his death in 1835. Isaac’s wife Eliza and her brother John Poyas managed the estate and leased the plantation to Mathurin Guerin Gibbs from 1845 until his death in 1849. Mathurin’s wife Maria was Eliza Poyas Ball’s niece and John Poyas’ sister.

While practicing law in Charleston, Gibbs sought to enter the planter class by purchasing Rice Hope Plantation in 1837 for $4,000. Rice Hope was an inland rice plantation located on Goose Creek in St. James Parish. Although the 1,007-acre property had the infrastructure to support the crop, Gibbs did not grow rice as a commodity. Instead, he focused on Santee black seed cotton, which was a popular cash crop grown above former inland rice fields in middle St. John’s Parish. From 1838 to 1844, Gibbs devoted only two acres each year to rice cultivation, which produced poor yields of five to eight bushels per year. A series of droughts and compromised harvests, beginning in 1838 and lasting until 1842, prevented Gibbs from paying off his mortgage. Eventually the crop failures led him to bankruptcy and forced him to sell the plantation at auction in February 1843. Despite Gibbs’ failure as a planter, he paid rent and continued to live on the property until December 1844, when he and his family moved to Jericho. 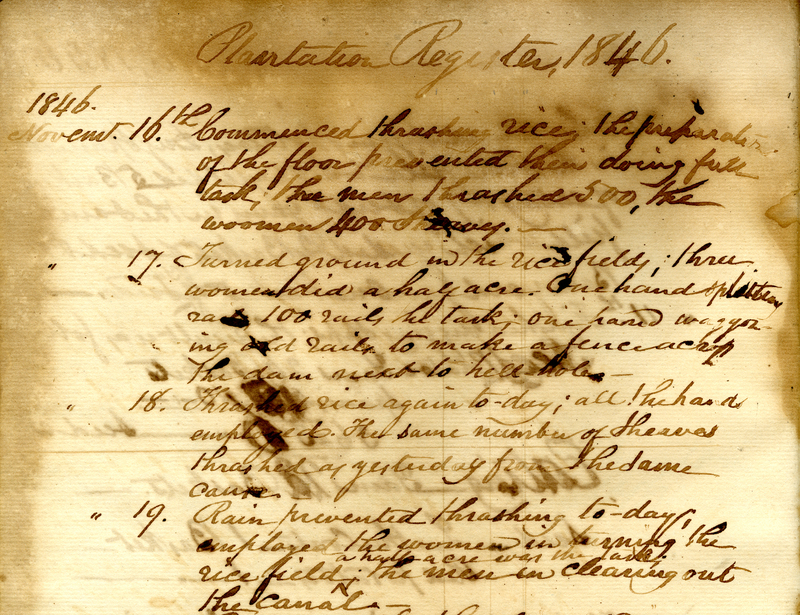 Entry for November 17, 1846: “Turned ground in the rice fields; three women did a half acre. One hand splitting rails; 100 rails the task; one hand waggoning old rails to make fence across the dam next to hell hole (swamp).”

Entry for November 19, 1846: “Rain prevented thrashing to-day, employed the women in turning the rice field, a half acre was their task; the men in clearing out the canal.”

Enslaved Africans at Jericho
Between 1812 and 1824, Jericho’s enslaved population grew from forty people to 136 people. In 1832, the population reached 152 people. This significant population of enslaved African American laborers generated a diverse agricultural output. Cultivators grew rice, cotton, corn, and peas, and raised cattle and other livestock. Those assigned to grow rice tended to a variety of responsibilities, such as turning fields, clearing canals, sowing seeds, and hoeing fields, coordinated with the agricultural season. Based on Ball inventory records, several Jericho slaves had specific titles like driver, trunk minder, carpenter, cattle tender, and nurse.

By the time of Gibbs’ ownership of Jericho in the late 1840s, the enslaved population dropped significantly. This change stemmed from the Ball family selling enslaved people to collect on the estate of Isaac Ball. The Ball family then leased the plantation to Gibbs, who had to supply his own labor force. During Gibbs’ residence at Jericho, only twenty enslaved people lived on the property. Because of the limited labor force, enslaved rice cultivators had to take on more responsibilities compared to a traditional inland rice plantation system.

Gibbs had limited knowledge of growing rice and relied on an enslaved African American driver named Billy to coordinate the agricultural schedule. According to Gibbs’ plantation journal, Billy was of old age and had worked as field hand for many years at Jericho under earlier owners before he became a driver for Gibbs. This experience made him knowledgeable of the subtleties of growing rice in this precarious environment, particularly in terms of field preparation, sowing seeds, flooding, and harvesting. 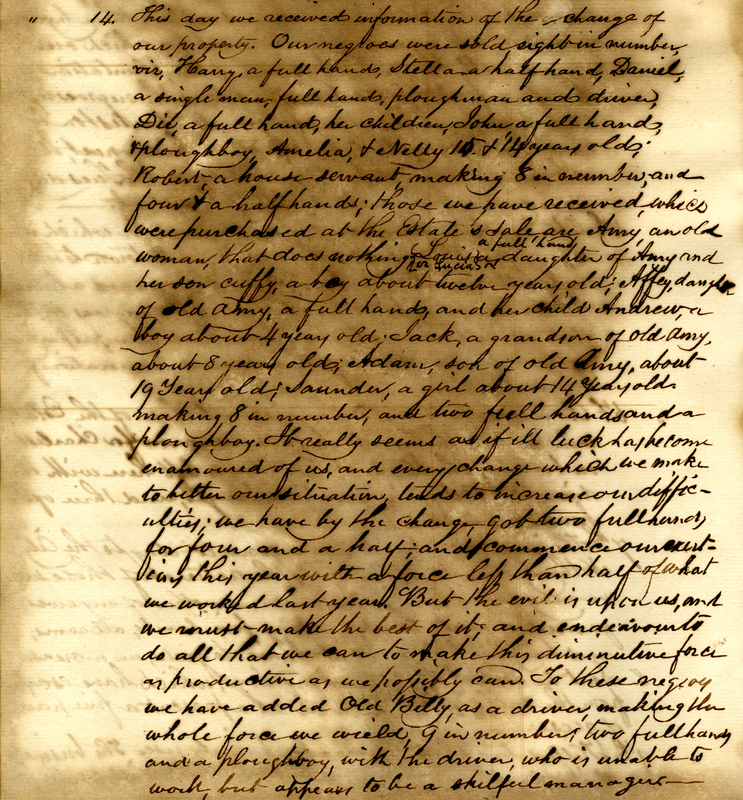 Last sentence of excerpt: “To these negroes we have added Old Billy, as a driver, making the whole force we wield 9 in number: two field hands and a ploughboy, with the driver, who is unable to work, but appears to be a skillful manager.”

Unlike a general rice cultivation model, where women and men performed separate tasks, the limited labor force at Jericho in the 1840s meant that enslaved laborers had to share cultivation responsibilities at this site. Gibbs, under Billy’s direction, had his field hands sowing rice from the third week of April to mid-May. Jericho slaves worked one field at a time, varying the amount of effort dedicated to total acreage, depending on weather and laborers’ health. First, men and women chopped the turned soil with hoes, which loosened the earth and aerated the ground. Traditionally women performed this task, while the men followed behind them to lay out staked guidelines to designate rows and trenches. Simultaneously, other men cleared the drains of accumulated debris to enable efficient water control on and off the fields. The amount of land worked, depending on the variables described, wavered between one acre and one and three-quarter acres, for six hands. Once a field was staked, women followed behind the men and planted rice seeds in the rows. They then smoothed the soil for aesthetic uniformity and efficient water flow. From late spring through the summer, both men and women would remove weeds in between the three controlled floodings of rice fields (documented under “Inland Rice Cultivation”).

Entry for April 12, 1845: “Continued sowing rice; and trenching the fields; sowed one acre in that grain. The task of a full hand in trenching is 3/4th of an acre; with my small force, I employ three males in trenching for two days, then turn all into sow and cover, two families on the days that the men trench, sow and cover one acre of rice; so that the sowing is regularly continued; when the males join in covering, the whole force does two acres and a quarter."

The Gibbs family and their enslaved residents worked Jericho until 1855. Mathurin Gibbs contracted malaria in the summer of 1848, struggled for almost a year with “violent” colds and swelling of the face, and experienced difficulty with walking, until his death in May 1849. Ultimately, the unhealthy landscape at Jericho, with its expansive wetlands providing breeding grounds for anopheles mosquitoes, killed Gibbs. In 1855, Mathurin’s widow, Maria, and her youngest son Frederic moved to Windsor where their enslaved laborers practiced rice cultivation anew. Windsor’s less isolated location and close proximity to Hyde Park Plantation, where the Gibbs’ eldest daughter Maria Louisa lived with her husband John Ball, appealed to Maria Gibbs. The Gibbs and Ball family ties strengthened further when Mathurin and Maria’s two younger daughters each married a Ball father and son. Mary Huger Gibbs married William James Ball, of Limerick, and Catherine Theus Gibbs married William James Ball Jr., oldest son from his father’s first marriage to Julia Cart. Jericho remained uninhabited through the Civil War until timber baron C.G. McCay bought the property from the Ball family in 1870. McCay logged Jericho, along with surrounding land, until the turn of the twentieth century. 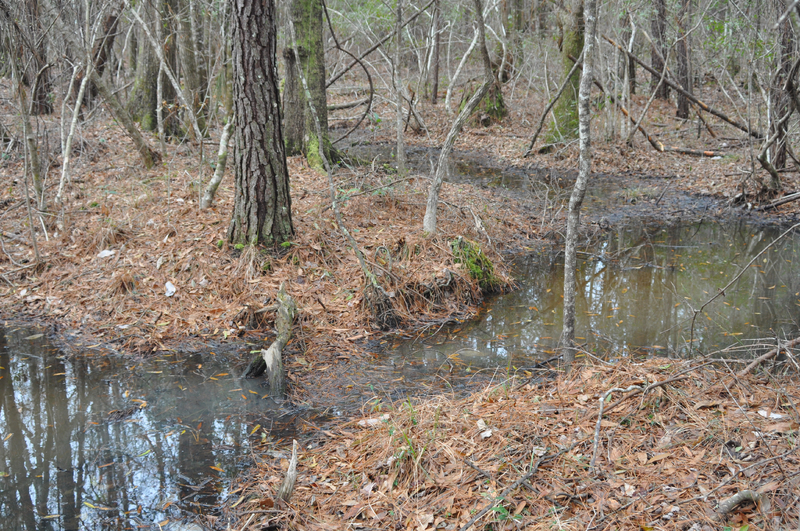