The Landscape of Inland Rice 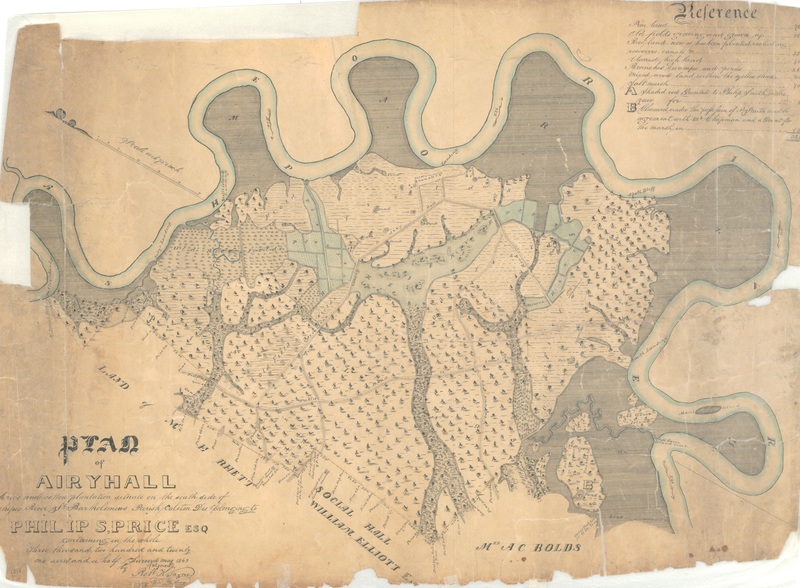 "A Plan of Airyhall, A rice and cotton plantation situated on the south side of the Ashepoo River, St. Bartholomew’s Parish, Colleton County,” South Carolina, May 1849, courtesy of the John McCrady Plat Collection, Charleston County Register of Mesne Conveyance. Airyhall was an inland tidal rice plantation in close proximity to a tidal river. Note the fresh water reserve in the center of the plat, used to irrigate rice fields to the right and left.

As colonists worked with growing numbers of enslaved Africans to evaluate swamps for rice cultivation in the early eighteenth century, they became more optimistic about these environments and their productive potential, and began to settle in low-lying interior swamps and marshes to harvest timber and cultivate rice. By 1730, Europeans and enslaved Africans had transformed the inland wetlands of the Lowcountry from a natural “wilderness” into a series of agricultural plantation sites. Carolina colonists also enslaved American Indians for developing plantations, though their numbers decreased significantly after the Yamasee War (1715-1717).

Inland rice planters’ success or failure began with selecting a site with the right soil content. Impounded rice fields best retained water in less permeable loam and clay in low-lying wetlands. Planters’ and slaves’ knowledge of soil content became crucial for the construction of reservoirs and fields. Although inland fields were localized in distinct watersheds that then flowed into larger Lowcountry river basins (specifically the Cooper-Ashley-Wando River Basin, the Ashepoo-Combahee-Edisto River Basin, and the Savannah River Basin), the micro-environments used for inland rice cultivation generally contained the same soil features. Meggett loam, as it was later known, was the soil type often associated with impounded inland rice zones. This soil had a mixture, or a loam, of sand, clay, silt, and organic matter.

Rice cultivators could use this less permeable soil to construct reservoir embankments. By reinforcing the retaining walls with clay, slaves created a human-made basin to hold water within the natural terrain. Compacted soil that created desirable conditions for retaining water, however, also generated arduous labor conditions for enslaved laborers tasked with shaping the landscape. For example, one Wando River plantation overseer complained that his hoes were “too broad and soft to dig up the clay land.”  The hoes were useless, he argued, because “they duble [sic] up like a sheet of lead and manney [sic] become useless before they are halfe [sic] wore [sic].” 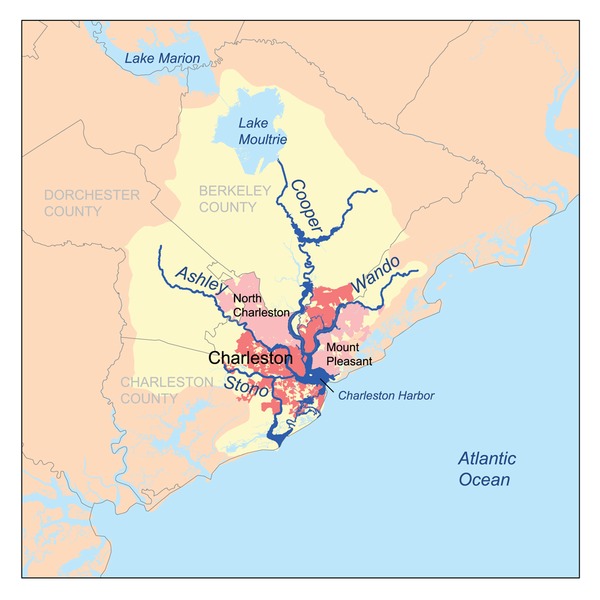 Map of the Charleston Harbor watershed in South Carolina, including the Ashley, Cooper, Wando, and Stono rivers, created 2007.

The ability to draw a steady amount of water to the rice fields was the second requirement for successfully cultivating inland rice. Unlike tidal rice cultivation, where planters and slaves harnessed the ebb and flow of tidal rivers, inland planters relied on water simply flowing from higher elevations down to their reservoirs to then use in their fields. These cultivators had to obtain water from reliable surface and ground sources−represented in drainage basins, swamps, bays, and springs. Watersheds composed of Meggett loam were relatively level, so water flowed through these zones as a slow moving current.

Finally, topography determined the natural boundaries for reservoirs and fields. Elevation change from knolls to bottomlands helped naturally enclose the reservoir and fields, eliminating the need for additional embankments. Because planters relied on geographical features to contain flooded fields, the boundaries of these agricultural systems initially resembled the fluid contours of natural tributaries.

Traveling through coastal South Carolina between 1722 and 1726, naturalist Mark Catesby observed how these inland rice plantation landscapes took shape: "the further parts of these marshes from the sea, are confined by higher lands, covered with woods, through which by intervals, the marsh extends in narrow tracts higher up the country, and contracts gradually as the ground rises." Elevation differences between highlands and the rice fields ranged from four feet at Charleywood Plantation on the Wando River, for example, to forty feet at Newington Plantation located on the upper Ashley River. Compared to tidal rice fields, inland fields were smaller and contained within the topography of the wetlands. Planters generally shifted their modes of production from inland to tidal rice cultivation following the U.S. Revolutionary War. Tidal fields sprawled across the riverbanks, which allowed planters to devote more land to tidal cultivation if the fields were built within the ebb and flow of the river.