The Black Craft Tradition in Charleston 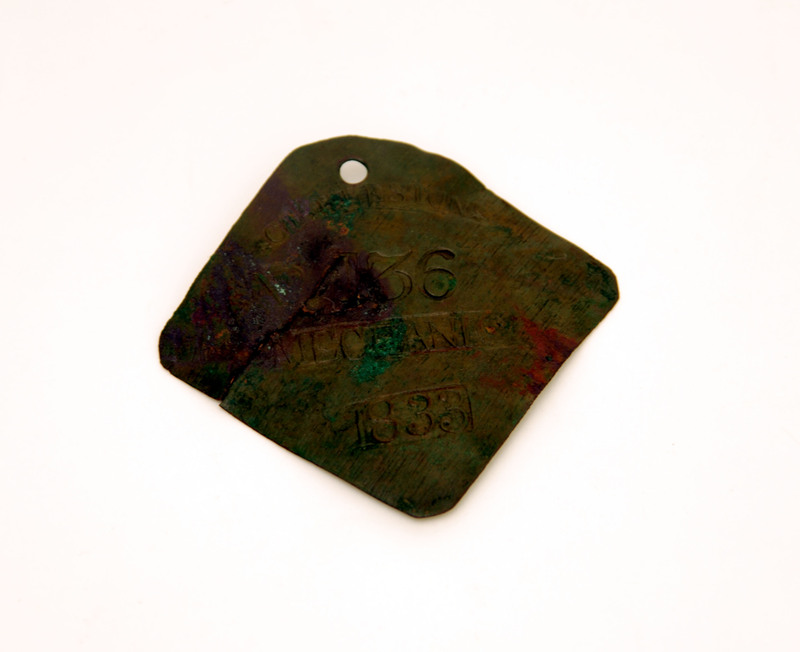 Slave badge, stamped "Charleston No. 136 Mechanic 1833," Charleston, South Carolina, Walter Pantovic Artifact Collection, courtesy of the Avery Research Center. Starting in the mid-eighteenth century, laws mandated that enslaved African Americans in Charleston had to wear slave badges, or tags, as proof that they were legally allowed to be hired out by their owners. Charleston badges were valid for one year, and could be purchased for various categories, ranging from "servant" to skilled positions such as "mechanic."

From its inception in the eighteenth century as a major center for the exportation of staple crops to international markets, and as a North American entrepôt for the importation and distribution of enslaved Africans in the eighteenth and nineteenth centuries, Charleston’s large and diffuse black population has long been one of the city’s most distinctive features. For most of the eighteenth and nineteenth centuries, Charleston’s black inhabitants even outnumbered whites, because the economy of the city and the surrounding Lowcountry region depended primarily on enslaved black labor. While the overwhelming majority of enslaved Africans in the Lowcountry worked in crop cultivation on rural plantations, in the urban context of Charleston, the black labor force worked primarily as domestic servants. A small but influential number of this black urban population also worked in industrial enterprises and skilled crafts, such as carpentry and ironwork. 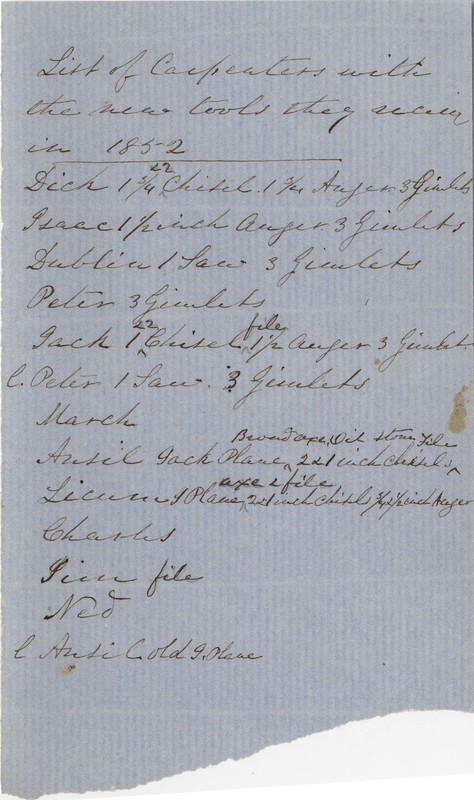 List of Slave Carpenters with New Tools Received, 1852, Heyward and Ferguson Family Papers Collection, courtesy of Special Collections at the College of Charleston.

According to the 1848 Census, Charleston slaves were involved in at least forty-five different occupations, many of which required considerable skill. A significant free black community also existed in antebellum Charleston, and by 1850 approximately eighty-two percent of free black males practiced skilled crafts.

In the decades following the U.S. Civil War (1861-1865), Charleston’s black workers took advantage of the opportunities that accompanied Emancipation. Some parlayed the skills they developed during slavery into entrepreneurial ventures. Former slave Stepney Riley, for example, opened his own stables after the war. Others who were free people of color before the war, such as Richard Holloway Jr., continued his family’s antebellum carpentry business in the post-war years. By 1870, black male Charlestonians are documented as working in 158 different occupations. Twenty-six percent practiced skilled trades, and their numbers made them the most highly skilled group in the city (compared to the numbers of native whites and recent immigrants working in skilled trades). Two-thirds of black men, however, were relegated to unskilled, semi-skilled or service occupations, and only six percent were represented in “white-collar” professions. In the late nineteenth century, both tradition and racial discrimination relegated most black workers to the jobs they had typically practiced during the antebellum years. 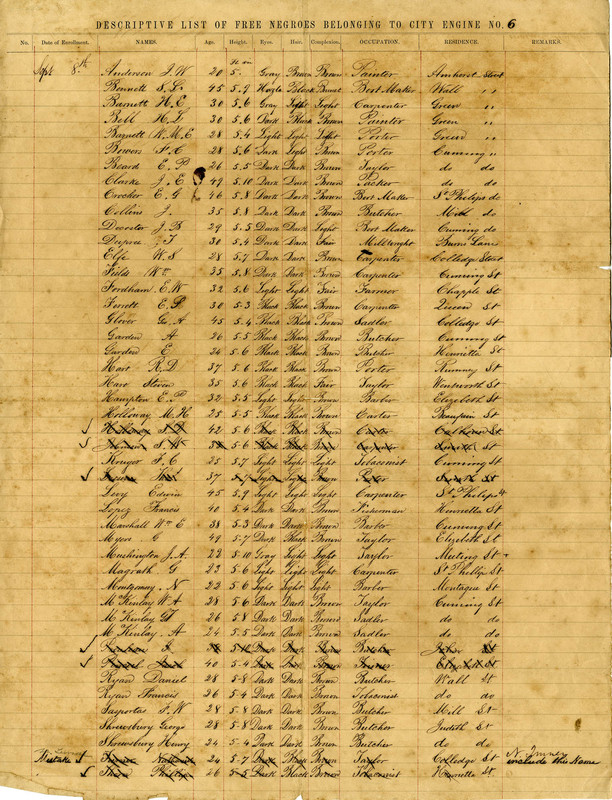 This is why, as late as 1880, the distribution of Charleston's skilled black workers was highly skewed towards only ten major occupations. Specifically, the jobs of carpenter, brick mason, tailor, baker, cooper, blacksmith, shoemaker, painter, barber, and butcher accounted for approximately three-fourths of all black skilled workers at that time.

Charleston, like other major U.S. cities, witnessed considerable competition between black and white laborers over employment in the late nineteenth century. Despite these tensions, black skilled labor remained prominent in Charleston for a variety of reasons. Some whites avoided skilled jobs such as the barber trade because they were customarily associated with black labor. In addition, wages for typically African American skilled positions were low in contrast to wages for positions typically held by whites in Charleston. This led many whites to avoid such occupations because they would have been forced to compete with blacks already working for lower wages. These factors allowed skilled black labor to continue in select positions in Charleston into the twentieth century. Building trades in particular, such as carpentry and blacksmithing, were dominated by African Americans in the city throughout the late nineteenth and early twentieth centuries. 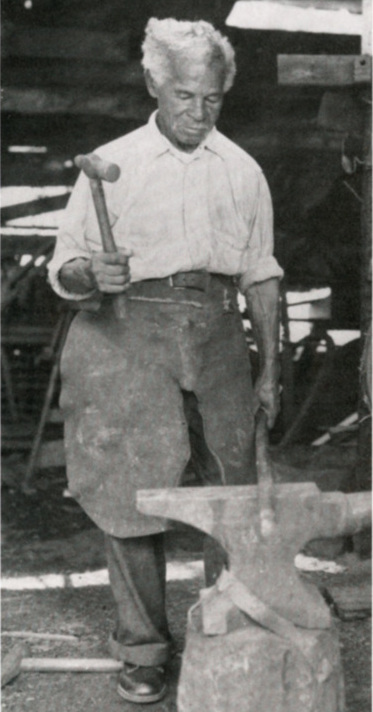 By the beginning of the twentieth century, however, new technology and merchandise developments marginalized black workers once more. These developments made skilled occupations traditionally performed by blacks less commercially important. For example, Charleston witnessed a twenty percent decline in the number of coopers and shoemakers during the period between 1880 and 1900, due to the increasing availability of factory-produced items. Many black laborers did not have access to training for the more technical trades that typified modern industrial production in the early twentieth century. While the number of machinists in Charleston more than doubled, the number of local blacks employed in these occupations actually declined. Given the exclusionist policies of white labor, black workers were limited to traditional crafts.

Philip Simmons's story reflects the influence of this history of established African American skilled trades in Charleston. Philip's teacher Peter Simmons (no relation) began his life as a slave in the Lowcountry. His father, Guy Simmons, was an enslaved blacksmith who taught Peter the trade at an early age. After Emancipation, Peter inherited his father’s blacksmith shop and supported vendors and clients in the Mount Pleasant area, just outside of Charleston. Eventually he moved into the city and opened a shop downtown. Peter represented an influential class of black craftsmen in Charleston who often transmitted their skills to rising generations of black youth through apprenticeships. Philip Simmons became Peter's apprentice when he was just thirteen years old. After years of thorough training in the metallurgical arts, Peter made Philip a partner. When Peter retired, he gave his shop to Philip, who was twenty-seven years old at the time. One of the most remarkable features of Philip Simmons’s life has been his ability to adapt the traditional blacksmith craft to a changing market. Just as other crafts practiced by black artisans declined in importance in the early twentieth century, the blacksmith trade in Charleston eventually suffered from reduced demand by the 1930s. Philip Simmons responded by transitioning his skills from the production of utilitarian pieces to decorative ironwork.

Drawing from a rich history of African American skilled trades in Charleston, Simmons produced hundreds of decorative gates and pieces of ornamental ironwork. He also trained a number of apprentice blacksmiths, and today his art and teaching are the enduring legacies this blacksmith passed on to the world. 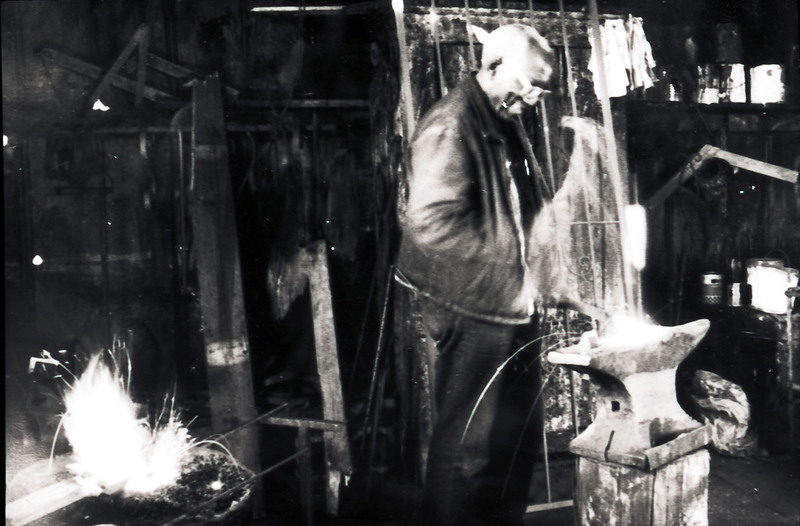