Philip Simmons, Keeper of the Gate 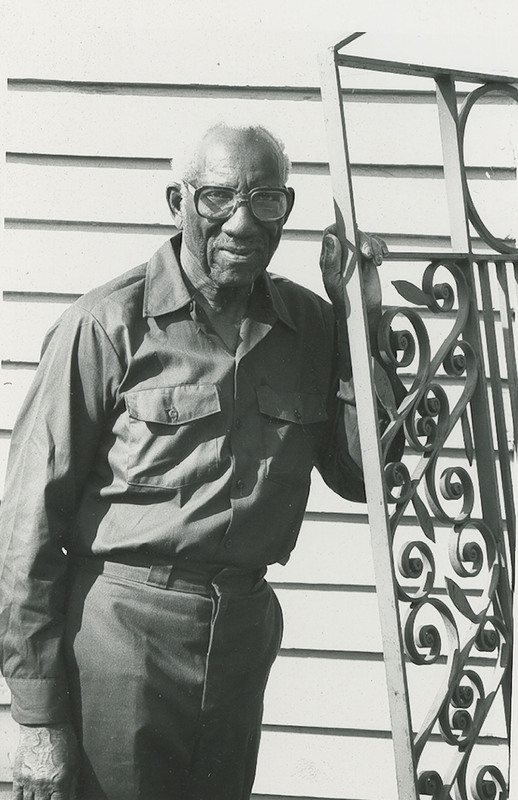 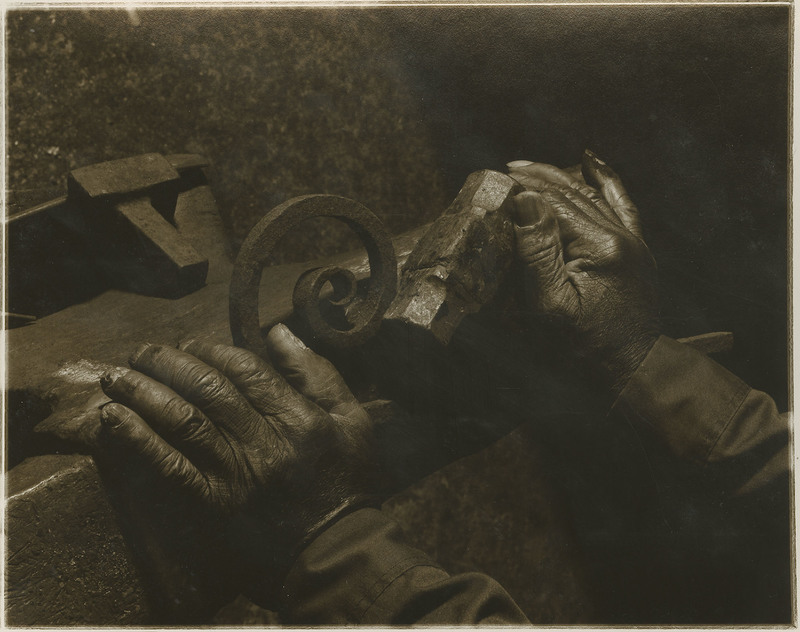 Philip Simmons’s honorific title, "Keeper of the Gate," is one in a series of accolades attributed to this talented artisan. He has also been referred to as the "Dean" of Charleston blacksmiths, a recognition that highlighted not only his seniority but also his excellence in the iron-working trade. Over the course of his seventy-seven years as a blacksmith he produced numerous wrought iron creations, including many renowned gates. Since Charleston is literally decorated with Simmons' work, he has essentially become a “Giver of Gates.” These works will last for centuries, and he now entrusts their preservation to his fellow citizens.

Philip Simmons was born on Daniel Island, South Carolina in 1912 and raised by his grandparents. When he was eight years old he moved to Charleston to live with his mother. Simmons's career began in 1925 when he stopped by the blacksmith shop of Peter Simmons (no relation) located at the foot of Calhoun Street. As a curious thirteen-year old, he was attracted by the commotion—the din, the hustle and bustle, the flame, and the distinctive ring of the hammer blows. Young Philip stood at the door long enough for Peter Simmons to notice him, and eventually, Peter offered him a full-fledged apprenticeship. Within five years Philip was able to partner with Peter to help run the shop.

In the 1920s and early 1930s, customers primarily had demands that called upon a blacksmith's practical skills. They wanted their tools repaired or sharpened, or perhaps a wagon wheel needed a new metal rim. Fishermen ordered various forms of "boat iron" and farmers required new points for their plows. Philip Simmons was trained to complete all of these utilitarian tasks but, importantly, he was also trained to do more. Peter had, on occasion, shown his young charge how to make pieces of decorative wrought iron. It was this branch of smithery that appealed to Philip in the 1930s. 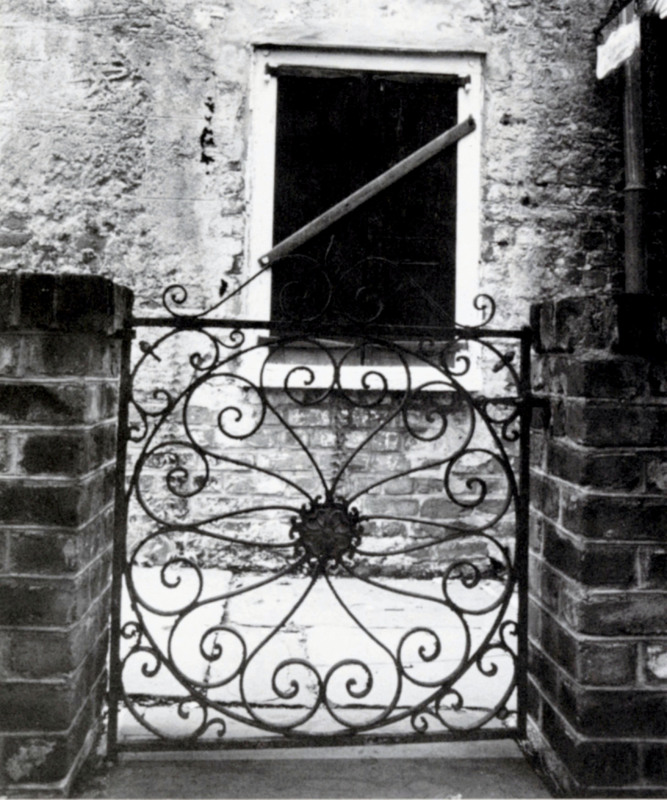 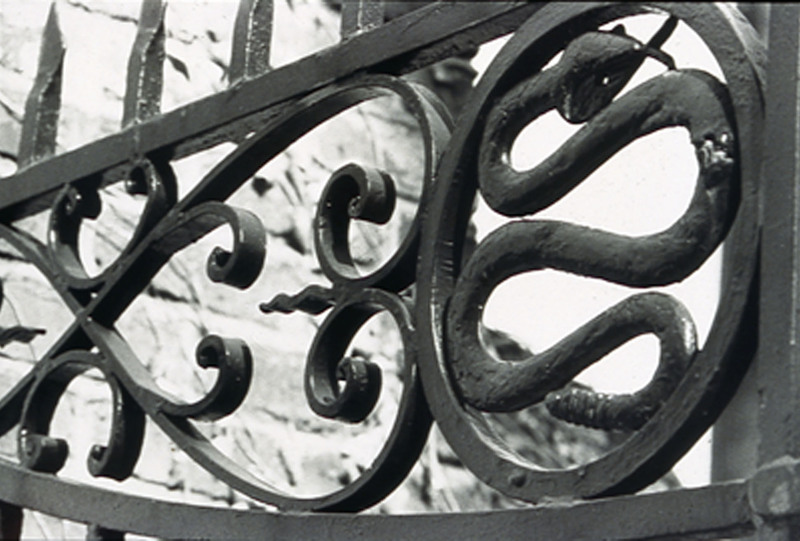 At that time, local residents and city planners started to become invested in the renovation and preservation of Charleston’s historic downtown buildings. In 1931, the city of Charleston adopted a historic preservation ordinance—the very first of its kind in the country. This ordinance established an “Old and Historic District” downtown and set up a Board of Architectural Review, which had the power to decide on demolitions and alterations to historic structures. Work soon commenced on a number of important buildings within that historic district, and there was a resurgence of requests for decorative ironwork on gates, balconies, window grills, fences, stair railings.

Requests for repairs to existing ironwork presented Simmons with an opportunity to practice his craft on older pieces. By the late 1930s, Simmons was able to replicate the older designs with replacements that appeared to have been original to the ironwork. The quality of his work soon spread around Charleston by word of mouth.

In 1947, Jack Krawcheck, a King Street merchant, visited Simmons at his shop with a request to make a driveway gate to keep his children from running into the street behind his store. At that time, Simmons had not made an entire gate before, and he was reluctant to take the job. Krawcheck encouraged him, and Simmons not only built the driveway gate, he also made an additional walkway gate to the courtyard and several other pieces for Krawcheck’s business and homes in Charleston, Sullivan’s Island, and in North Carolina.

Simmons soon received several commissions for garden gates in Stolls Alley (a residential alley in the “Old and Historic District” downtown), and he transitioned his primary focus from practical ironwork to decorative wrought iron. By the 1950s and 1960s, his works could be found in prominent Charleston locations such as the First Baptist Church, the Christopher Gadsden house on East Bay Street, and the Rhett house on St. Michael's Alley. These gates featured sculptures of animals such as a rattlesnake at the Gadsden house and a delicately profiled egret for the Rhetts. These intriguing figures were the first examples of animal sculpture in Charleston wrought iron, and they significantly expanded the vocabulary of the local decorative iron working tradition. 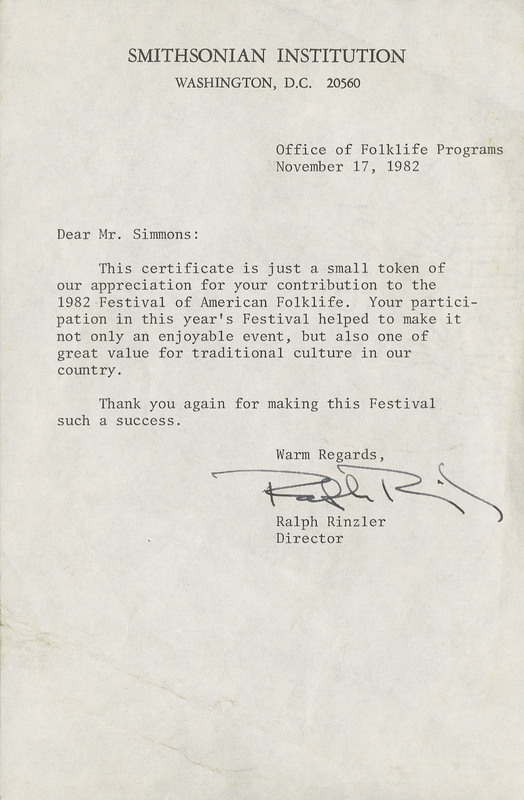 Letter from Ralph Rinzler to Philip Simmons in appreciation of his participation in the 1982 Festival of American Folklife, November 1982, Philip Simmons Collection, courtesy of the Avery Research Center. 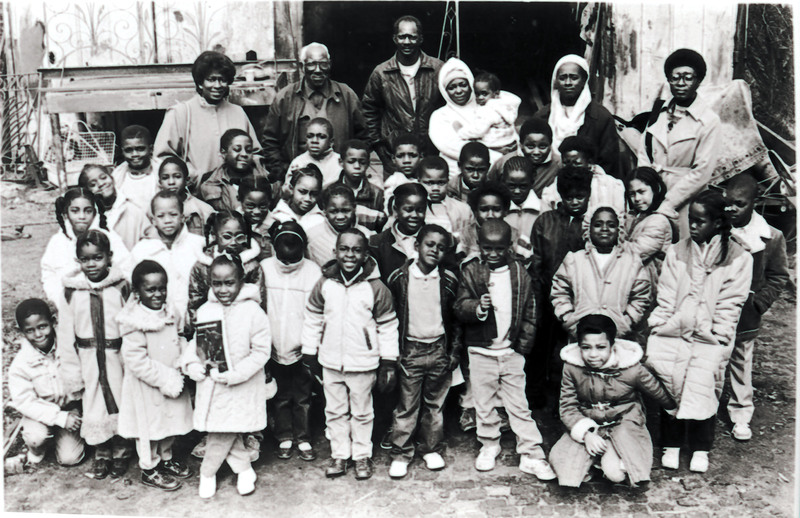 Philip Simmons and a group of children in front of his workshop, ca. 1995, Philip Simmons Collection, courtesy of the Avery Research Center.

In 1976, Simmons received an invitation to appear at the Smithsonian Institution's revival of the American Folklife Festival, which led to greater national recognition. In 1982, when the National Endowment for the Arts created its National Heritage Fellowships (the highest honor that it grants to traditional artists), Simmons was included in the first group of recipients.

The fame that accompanied this award was followed by many other honors and expressions of appreciation, including lunch at the White House with President Ronald Reagan, the presentation of a lifetime achievement award from the South Carolina State Legislature, a major commission from the South Carolina State Museum, and a mayoral declaration that his eightieth birthday be known throughout the city of Charleston as "Philip Simmons Day." In 1991, the Philip Simmons Foundation, Inc. formed through Simmons’s church, the St. John’s Reformed Episcopal Church, and this organization developed a commemorative garden at 91 Anson Street in Charleston. On May 12, 2006, Simmons received an Honorary Doctorate of Fine Arts from South Carolina State University in Orangeburg, South Carolina. Despite these many accolades, Philip Simmons was notoriously modest, and he repeatedly stated, "I owe all that I have to the people of Charleston."

After he retired in 2005, Simmons continued to live and work at his home and workshop at 30 1/2 Blake Street in the Eastside neighborhood of Charleston. He regularly welcomed visitors and school groups to his home to learn about his rich experiences. By 2008, Simmons could no longer work and moved to a supported living facility. On June 22, 2009, he “went to his rewards,” and in response Charlestonians honored Philip Simmons’s artistic life by tying white ribbons to his ironwork throughout the city and surrounding areas.

In 2010, the Philip Simmons Museum House officially opened at his home on Blake Street. Simmons’ nephew, Carlton Simmons, and his cousin, Joseph “Ronnie” Pringle, continued to operate the workshop. Today, Carlton still works as a blacksmith, and he hopes to train new generations in the craft. 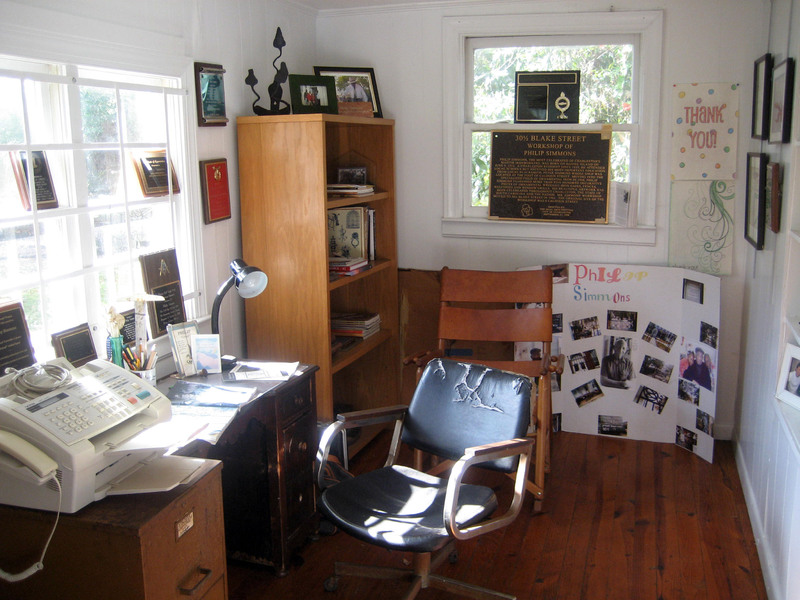 ← The Black Craft Tradition in Charleston
The Photographer's View →