Essay by Sara Arnold, The Gibbes Museum of Art

In 2009, the Gibbes Museum of Art in Charleston, South Carolina commissioned North Carolina-based artists Juan Logan and Susan Harbage Page to collaborate on a site-specific installation. Both Page and Logan are known for powerful and thought-provoking explorations of the intersections of race, class, and gender, and the artists were invited to reexamine the museum’s collection within the context of their work. 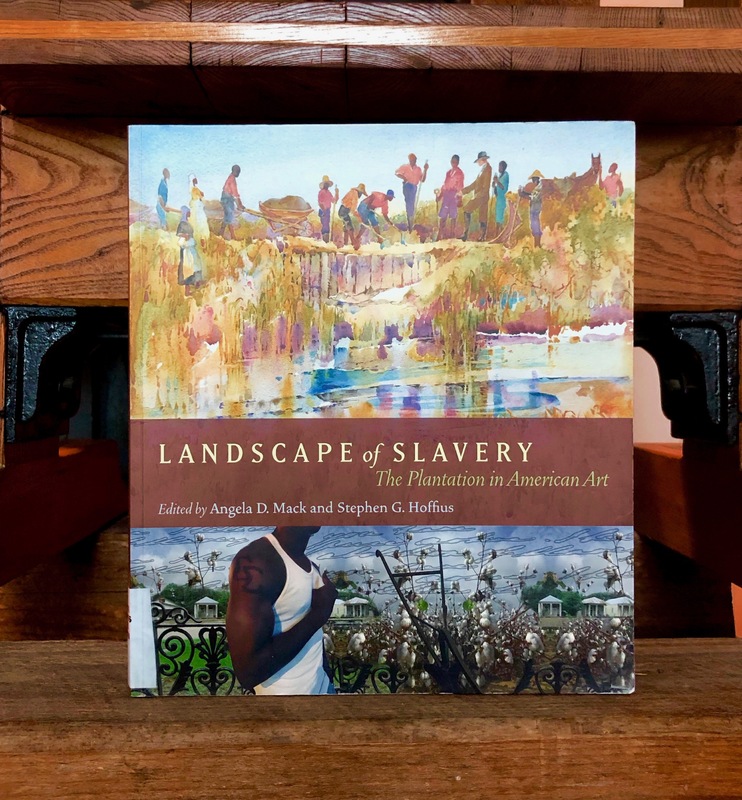 Cover of Landscape of Slavery: The Plantation in American Art, by Angela D. Mack and Stephen G. Hoffius, 2008, photograph by Cappy Yarbrough. 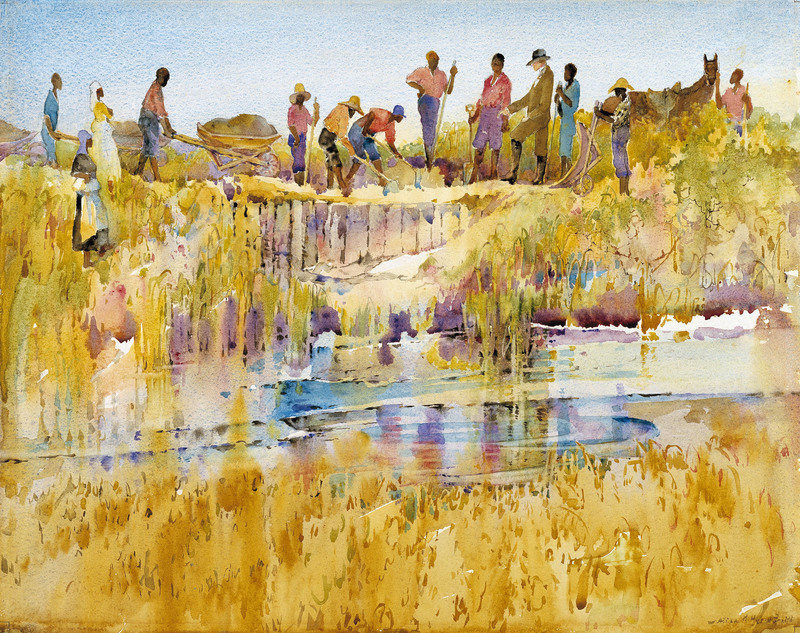 Mending a Break in a Rice-Field Bank, from the series "A Carolina Rice Plantation of the Fifties", Alice Ravenel Huger Smith, ca. 1935, courtesy of the Gibbes Museum of Art.

At the time, the Gibbes was in transition, and pursuing a new chapter in its long history. A year earlier, it celebrated the 150th anniversary of its founding organization, the Carolina Art Association, and hired a new executive director from the ranks of the staff to shape a stabilizing, yet fresh and relevant path for the museum’s future. It also opened a groundbreaking exhibition, Landscape of Slavery: The Plantation in American Art accompanied by a scholarly catalogue that offered the first-ever comprehensive examination of American plantation imagery and the aesthetic motives and social uses of this art-form. Landscape of Slavery, along with other contemporaneous scholarship that focused specifically on the art and material culture of Charleston, including Stephanie Yuhl’s A Golden Haze of Memory: The Making of Historic Charleston (2005) and Maurie McInnis’s The Politics of Taste in Antebellum Charleston (2005), placed imagery from the Gibbes’ collection firmly within a larger dialogue on race and visual representation. Angela Mack, the Executive Director and Chief Curator appointed in 2008 and curator of the Landscape of Slavery: The Plantation in American Art exhibition, recalls the impetus for the exhibition:

After the Landscape of Slavery exhibition closed we had to decide how the narratives surrounding race, identity, and power, which were addressed in the show, would continue to inform future projects and serve as a turning point for the institution. It was a natural step for us to seek out another exhibition that would continue this conversation. Something along the lines of Fred Wilson’s museum interventions is what we had in mind.

Logan and Page spent nine months studying the Gibbes historic collection and materials from the institution’s archives. Prop Master: An Installation by Juan Logan and Susan Harbage Page opened to the public on April 3, 2009.

At the Heart of the Exhibition

A 20’ x 40’ platform covered with small boxes confronted visitors as they entered the show. The sea of boxes—9960 white boxes and 40 black boxes— represented the ratio of artworks in the Gibbes collection created by European American artists versus African American artists. The platform was flanked by six fluted columns referencing the grand homes of Charleston originally constructed and paid for by enslaved labor. These homes held many of the historic portraits and landscape paintings that make up the Gibbes’ early American collection. This substantial rectangular installation, entitled Prop Allocations or Accents for Gracious Living, not only offered a striking visual representation of the inequities that existed in the museum’s collection, its shape was intended to mirror that of the gallery. As Laurel Frederickson, Prop Master’s exhibit text writer noted, it signified “the museum as an institution and microcosm of society.” Logan and Page’s entire installation was designed to “comment on how culture—rituals, codes, manners, and customs—is supported and sustained by the museum as a prop master, with works of art the props to stage a particular portrait of society.” 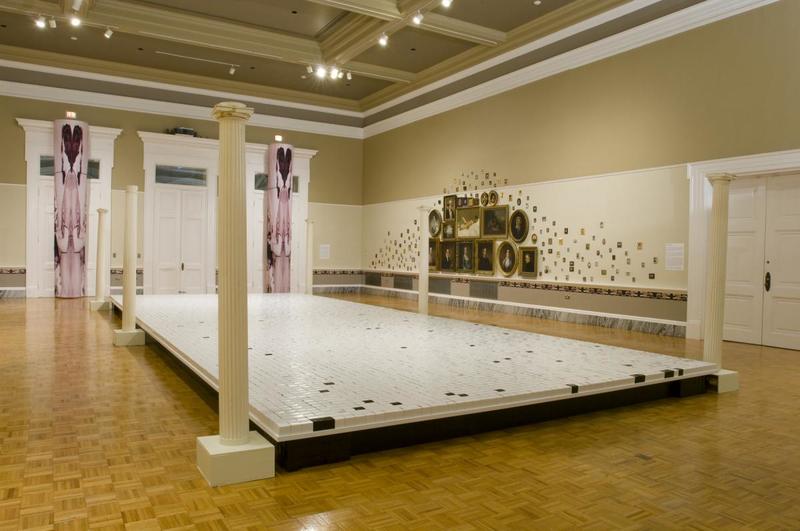 Each of the artists’ six installation pieces juxtaposed materials from the museum’s permanent collection with works of the artists’ own creation. The result offered a provocative critique of Charleston’s privileged society long undergirded by the legacy of slavery. Through their works the artists highlighted inequities and exclusions that permeated the Gibbes Museum’s 150-year-old collection and thus offered a skewed or romanticized view of the past. The work challenged visitors, as well as museum staff and stakeholders, to contemplate the role the institution played in shaping social norms and reinforcing power structures within the community based on what it chose to collect and exhibit and, perhaps more importantly, what works, and narratives were excluded.

The exhibition remained on view for sixteen weeks. Nearly 6000 people visited the Museum during the exhibition’s run. The show garnered coverage in several national arts publications and received reviews in local newspapers and in at least one scholarly journal. While the impact on the community at large is difficult to measure, the exhibition instilled a new awareness among museum staff that resonated well beyond the closing of the exhibition. Mack put it this way:

We considered Prop Master an important part of an ongoing evolution. Museums have an obligation to provide context and challenge perceptions, and this was like holding up a mirror to see what we were reflecting, and how we might be perceived. The installation continues to challenge and guide us. 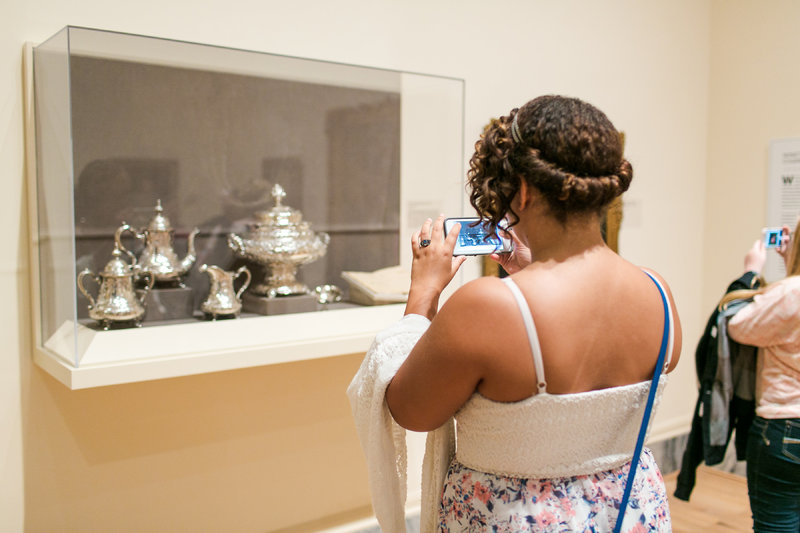 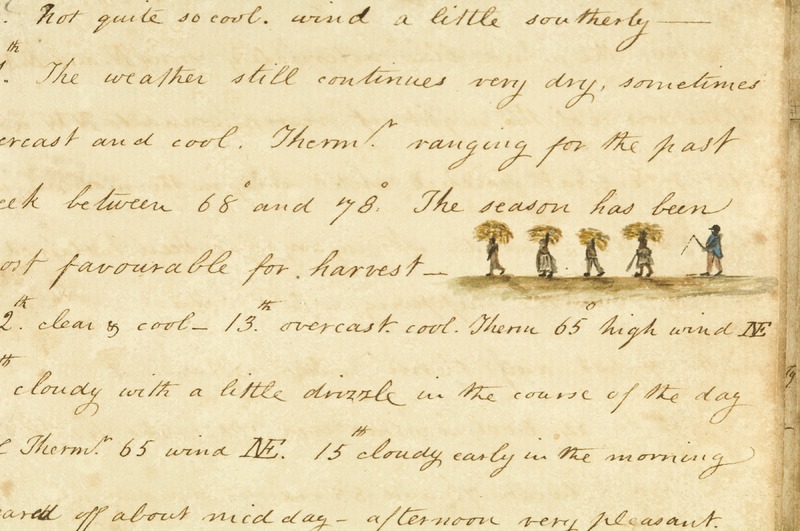 Sketch of enslaved people and driver from the plantation journal of Charles Heyward, Charleston, South Carolina, 1826-1835, courtesy of the Gibbes Museum of Art.

The practice of institutional critique through collaborations with artists was still a relatively new concept when Prop Master opened nearly ten years ago, and scholarship examining museums within the framework of social equality was still burgeoning. However, since that time, discussions about museums, equality, and social justice have fully entered the mainstream consciousness of the museum profession.

Although the Prop Master exhibition was a temporary experience for Gibbes visitors, the critiques expressed through the exhibition continued to reverberate within the institution. The Gibbes closed to the public in 2014 for an extensive two-year building renovation. The project provided a pause in operations that allowed museum staff and stakeholders to redefine the Gibbes and its role in the community. How the institution might reckon with its deep roots in history and at the same time build a vibrant and inclusive future was at the heart of many planning discussions, from the reinstallation of the permanent collection to the reopening exhibitions. This reconsideration of the Gibbes’ role was further influenced by the horrific, racially motivated shooting that occurred at the Mother Emanuel African Methodist Episcopal Church on June 17, 2015, an event that devastated the city and at the same time radically altered the social consciousness of its people. The event awakened a call for social justice that permeated the community’s institutions, including the Gibbes. 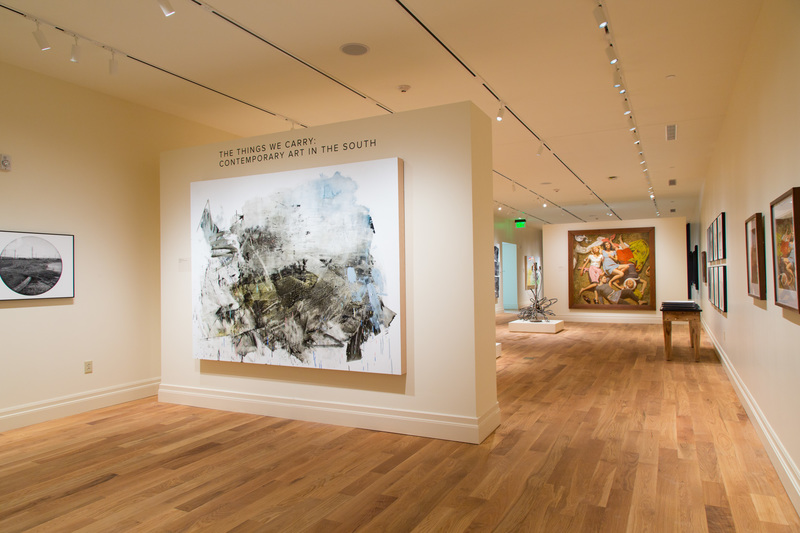 Entryway to the exhibition, The Things We Carry: Contemporary Art in the South, 2016, courtesy of the Gibbes Museum of Art. 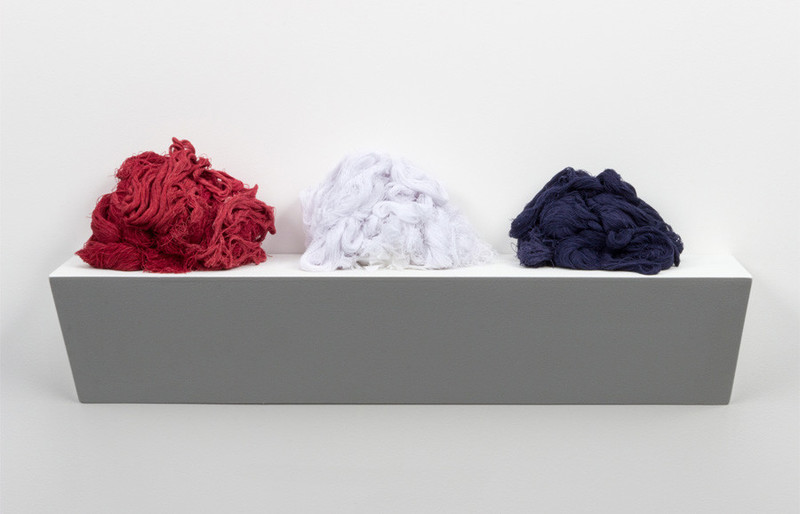 Unraveled from "The Things We Carry," Sonya Clark, photograph by Taylor Dabney, Charleston, South Carolina, 2015, courtesy of the Gibbes Museum of Art.

The often-exclusive narratives of Charleston’s visual history exposed through the Landscape of Slavery and Prop Master exhibitions were magnified by the horror of the mass shooting in one of Charleston’s most historic African American churches. As a result, the healing power of art redefined the Gibbes’ purpose. The museum’s reinstallation of the permanent collection more directly explores the context in which race and power have shaped society and the arts in Charleston particularly. Recognizing the role that the transatlantic slave trade played in Charleston’s history and thus in the material culture preserved and displayed in the museum is now a primary theme in the Gibbes’ renewed narratives--woven in through objects where possible and integrated in text throughout the museum. For instance, a case of fine silver, flanked by nineteenth century portraits is accompanied by the personal diary of a plantation enslaver.  In addition to copious notes on daily weather patterns, the diary contains numerous illustrations of enslaved people working the Lowcountry lands and waterways, including one of an overseer brandishing a whip over enslaved laborers hauling rice. Incorporating such imagery is a small step towards illuminating the history of slavery. Additionally, the Gibbes is working to acquire objects for its permanent collection that better highlight the art and craftsmanship contributed to the American art pantheon by Africans and African Americans before the Civil War. Artworks on temporary loan such as a David Drake pot, and sweetgrass baskets help to demonstrate these significant contributions but more objects that can be permanently displayed are needed to fill these gaps in the collective narrative.  Themes of race and power were also tackled in the reopening special exhibition. The Things We Carry: Contemporary Art in the South brought together the work of living artists that addresses the troubled history of the American South. The exhibition opened prior to the first anniversary of the tragedy at Emanuel AME Church and the museum offered space for contemplation and dialogue.

Untitled from Passage on the Underground Railroad from "The Things We Carry," Stephan Marc, Charleston, South Carolina, 2002, courtesy of the Gibbes Museum of Art.

Beyond the gallery walls, a concern for diversity and equality is expressed in the museum’s manifesto, which begins with an acknowledgement of the city’s complicated history and its central role in American slavery. This document serves as a touchstone and guiding concept in all of the museum’s endeavors and is embedded within the museum’s new ten-year strategic plan (2018-2028).

While we were home to some of America’s earliest art, collectors, artists, who made the City both muse and subject – and taken our turn as one of the nation’s richest cities – in money and culture – so were we also home to America’s original sin, slavery – and a war that divided our country…Through our complicated history, through light and shadow, we have persevered – humanity intact. Art is the reason Charleston will endure…Because when we open ourselves to art, we open ourselves to the world – to people and ideas, to beauty, craft, process and detail, to different cultures, to pain and pleasure, to questions, expression and emotion, to truth and transcendence.

Still, efforts to render equality in visual representation continue as do efforts to encourage racial diversity among members of the board of directors and staff. Since the close of the Prop Master exhibition nearly ten years ago, the museum has added 28 new works by African American artists, more than half the number of objects by African American artists acquired since the collection was founded in 1858. Since 2009, then, we have increased the number of black boxes in Prop Allocations or Accents for Gracious Living by more than fifty percent.

← Interviews with the Artists
Historical Hauntings in Charleston →