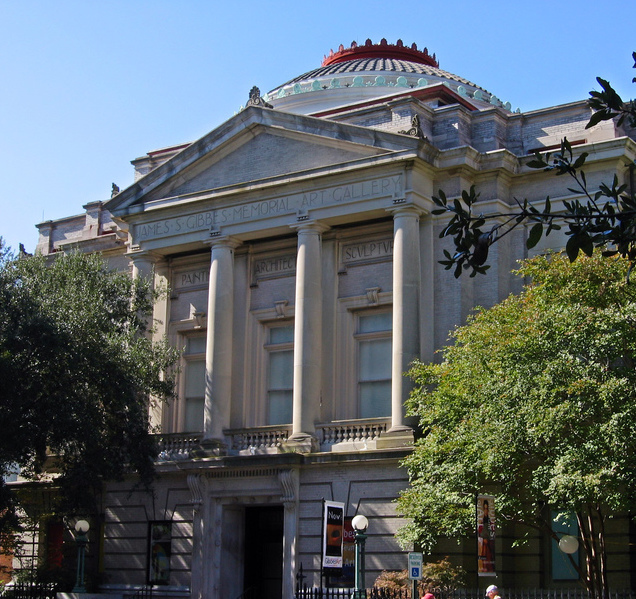 From April 3 through July 19, 2009, the Gibbes Museum of Art in Charleston hosted a site-specific exhibition, Prop Master, that constituted a bold intervention in the city’s cultural and historic landscape. At the invitation of the Gibbes Museum, artists Juan Logan and Susan Harbage Page radically reimagined and reworked objects from the museum’s permanent collection in a multi-element installation that laid bare the complex historical interconnectedness of Lowcountry residents and confronted historical legacies of racism, sexism, and violence. The exhibit forged headlong into the sticky web of Charleston’s past. Deploying multiple forms, including mixed media, portraiture, video montage, photography, and sculpture, the installation wove through the heavy threads of racial power, abuse, and agency, sexual and gender transgression, historical intimacy and cruelty, and institutional accountability and injustice. The result was a searing visual critique of ways the museum, the city, and the United States have propped up pernicious racial and gender hierarchies over time. 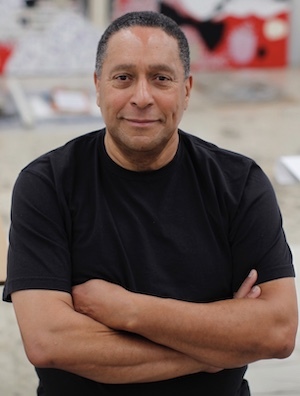 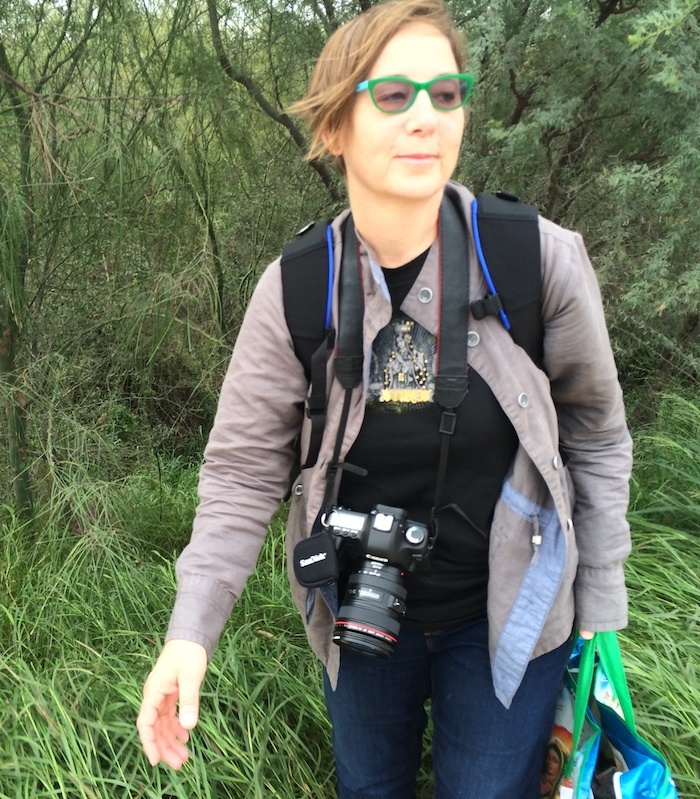 First, this project digitally recreates the complete 2009 Gibbes Museum of Art exhibit, Prop Master, so that current-day viewers can encounter this visually provocative and groundbreaking site-specific art installation in its entirety. Here, visitors can explore the exhibit as they might have moved through the physical space of the Gibbes’ Main Gallery.

Second, Revisiting Prop Master also serves as a digital catalog of the original 2009 exhibit that provides additional essential materials to frame and deepen the viewer’s understanding of Prop Master’s message, impact, and power. Building on a contemporary treatment of the Prop Master in Southern Spaces, this digital catalog explores the South Carolina Lowcountry’s history of black/white and gender/sexual interconnectedness, the ways that Prop Master functioned as an historical haunting through art, and the exhibit’s impact on the Gibbes museum of Art’s mission and current and future programming. Reflections from the artists as well as visitors’ responses to the physical exhibit are also archived here in Revisiting Prop Master.

Beyond the value of an historical catalog and exhibit recreation, why is it necessary to revisit Prop Master ten years later? Prop Master’s themes and challenges remain relevant and pressing challenges today. The installation sheds light on connections between the meaning of history, public memory, and current events. Prop Master also highlights the powerful role violence plays in maintaining historical falsehoods and enacting individual harm, especially along the lines of race, gender, and sexuality. These issues resonate deeply not only with Charleston, but with cities, suburbs, and rural regions across the United States. For Charleston specifically, in the years since the 2009 exhibit, the region has been the site of ongoing racial violence and resistance, from the shooting of Walter Scott, an African American, by a white North Charleston police officer to a white supremacist’s murder of nine African American congregants at Charleston’s Mother Emanuel AME Church to the resistance of the Black Lives Matter movement. In ways that are vital to our civic health, Prop Master called on viewers to reimagine what social justice might look like in the present—and reflecting on that challenge today is as important as ever. 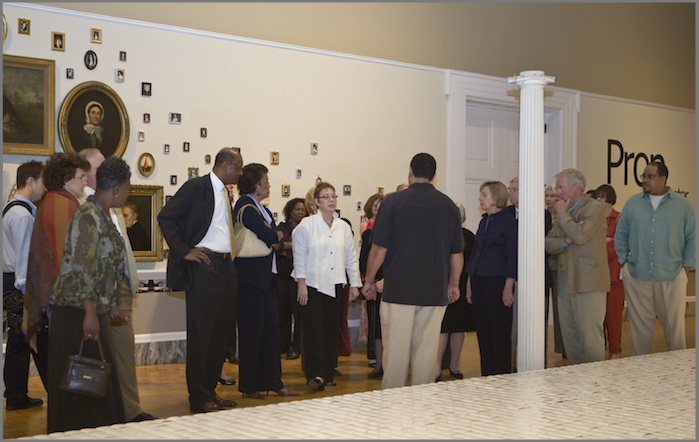 The exhibit’s title, “Prop Master,” was a brilliant multiple entendre that revealed the many possible meanings of property and mastery in the Charleston context.  On the surface level, the term refers to the person in a theater production who acquires and arranges all the props necessary for a performance. When applied to the Gibbes (and to Historic Charleston by extension), the idea of the prop master implicates the museum as participating in a highly-staged representation of the city that empowers some while disempowering others. In the Charleston context, of course, the term “prop master” also alludes to the ultimate property master – white Southern enslavers – and their property – enslaved African-American men, women and children.  Finally, through their dramatic and cunning work, Logan and Page themselves functioned as prop masters by “restaging” objects from the Gibbes in provocative ways. They pushed viewers past the public Charleston script that largely romanticizes the region’s history and into the messy and dangerous behind-the-scenes legacies of a society based on the exploitation of its enslaved black majority. 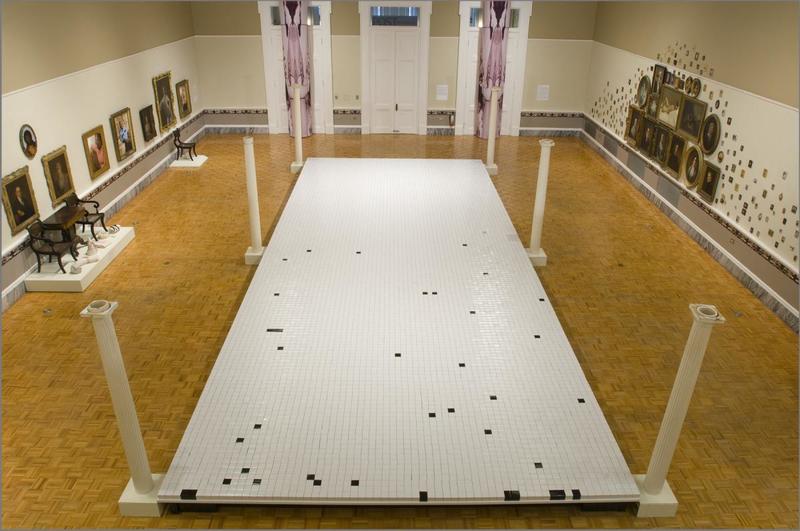 Prop Allocations or Accents for Gracious Living: an arrangement of 10,000 small boxes, white and black, on a raised platform surrounded by columns and supported by all black boxes, demonstrating the imbalance of racial representation among artists in the Gibbes’ permanent collection and the largely unrecognized but vital reality of black labor undergirding all of Charleston’s “gracious” enterprises.

Famous Last Names: a series of paintings and photographic portraits of black and white Charlestonians who share the common surnames of slave-owning Lowcountry families, as well as an imagined Portrait of Denmark Vesey in a repurposed, equally imagined painting of Jesus.

Expressions of Affection: a set of Ku Klux Klan robes bundled into various shapes, covered in silk and seersucker and tied like presents with ribbon, laying on the ground in front of an arrangement of period furniture from the Charleston Museum and the Joseph Manigault House.

Sexually Ambiguous: an entire gallery wall filled with a large triangular arrangement of dozens of18th- and 19th-century miniatures and various-sized painted portraits, many digitally altered to underscore the potential hidden histories of the subjects.

Welcome Home: a digital assemblage with sound of commercial film and documentary clips from the first half of the 20th century that showcase American racism and commercialized racial stereotypes.