Who was Sam Aleckson? 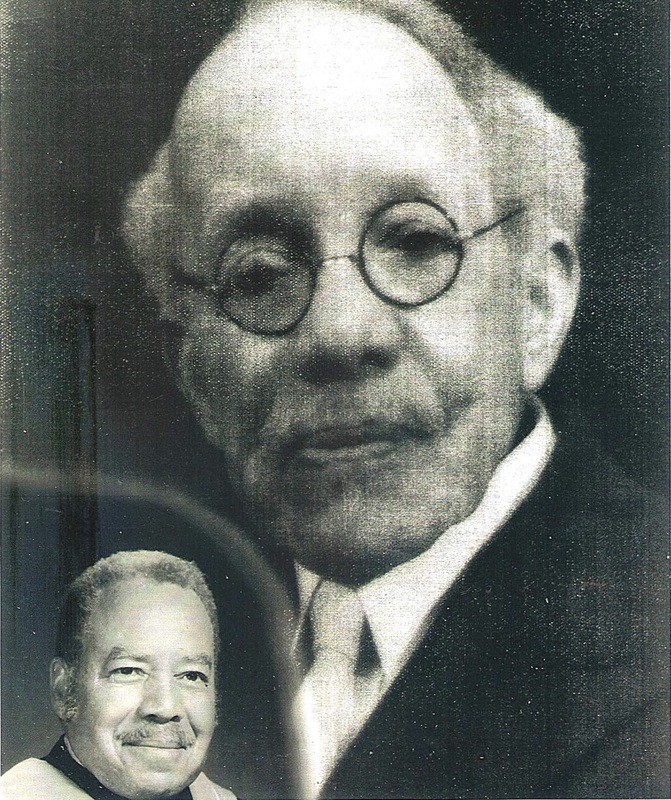 Samuel Williams pictured with grandson, Walter G. McClain (lower left), circa 1940 and circa 1980 respectively, courtesy of the McClain family.

When Before the War, and After the Union was published in 1929 by Williams’s son-in-law’s press, it had the name “Sam Aleckson” proudly affixed to the title page.  The book did not make much of a splash in the literary world, and there’s not any historical evidence that it was reviewed or distributed in any systematic way (although if you know differently, please be in touch).  It was, nonetheless, clearly treasured by family members and his descendants, and a few precious copies made their way into library collections. Currently there appear to be some 27 known extant copies held by libraries and historical societies around the country.  The narrative was rarely studied or given much note until it was reprinted with the name “Aleckson” in my collection I Belong to South Carolina: South Carolina Slave Narratives. Shortly after the 2010 publication of that volume, a descendant wrote me to say that he was delighted to see his ancestor’s work getting attention but that the correct name of the author was “Williams” not Aleckson.  Indeed, the book’s copyright was registered under the name of “Samuel Williams.”

This revelation opened an entirely new approach and avenues to learning about the living story behind the book.  It also illustrated how much of what we know or surmise about artifacts and stories is woefully insufficient and awaiting only the insight of people who have never been asked or have been overlooked in compiling a history. In order to correct the historical record and flesh out the wonderfully human story of the real “Sam Aleckson” behind the memoir, this comprehensive exhibition of the life and writing of “Samuel Williams” was conceived.

As noted, like many memoirists, in addition to the pen name of "Sam Aleckson," Williams uses a series of false place names and false names for individuals interwoven with actual names of places and people he knew. This poses two problems for his readers: how do we understand his motives, and how do we identify the places and people important to him?

Some of these “code” names are fairly easy to decipher: "Aleckson" is undoubtedly a tribute to his father, Alexander Williams. "Spring Lake, Connecticut" clearly refers to Springfield, Vermont, a town in Vermont's Connecticut River Valley within the county of Windsor, Vermont (which Williams slyly refers to as "Sorwind" in his narrative). 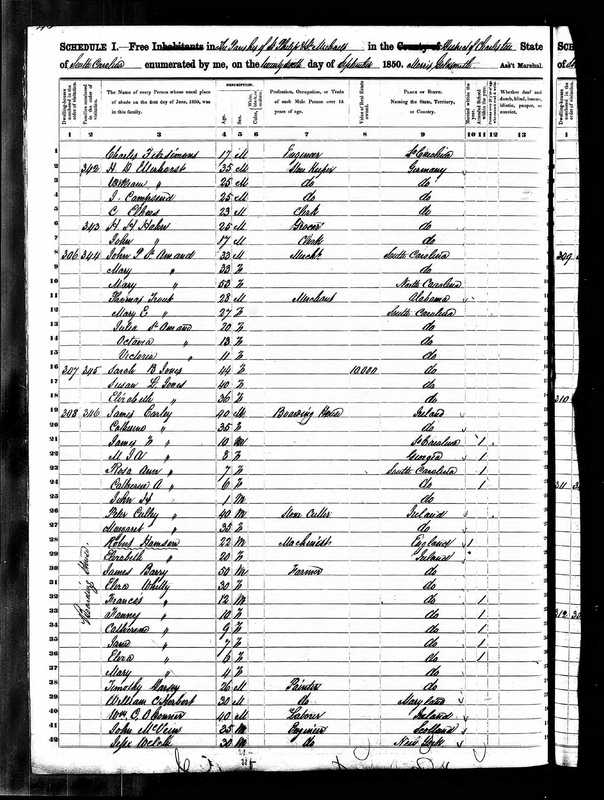 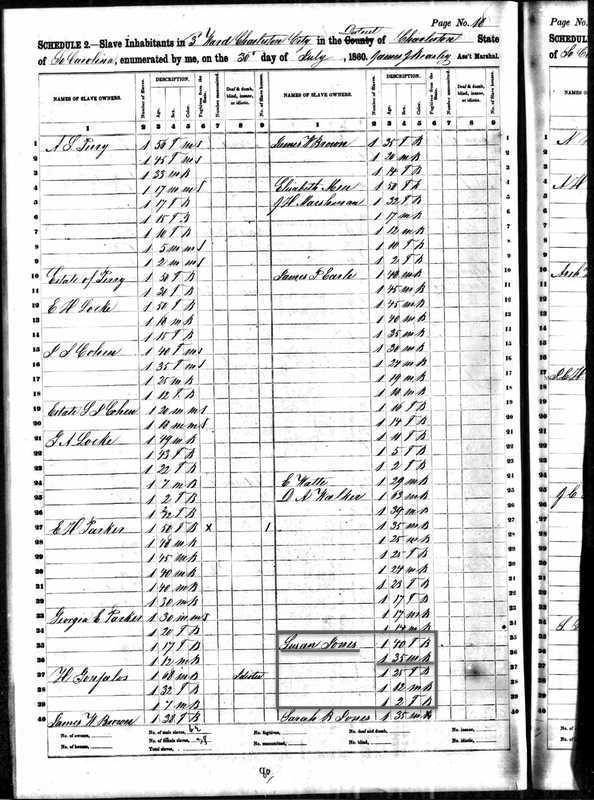 Slave Schedule, United States Census Bureau, Charleston, South Carolina, 1860, courtesy of Ancestry. Susan Jones is listed as owning a 35-year-old male, matching the age Williams's father, Alexander, would likely have been at the time. Williams says the "Misses Jaynes" who lived on Guignard Street were his "father's people." In piecing together information from Williams's memoir with historical records, some of the coded identities from the memoir emerge.

Other references are harder to identify, yet historical records, such as census reports and city directories, provide significant clues. For example, we can be fairly sure the white women Williams describes teaching him to read when he was a child were the Jones sisters who, according to the censuses and city directories, lived together on Guignard Street in Charleston at the same time that Williams also reports living there. Based on an examination of slave schedules, tax documents used to track enslaved property, it also appears likely that one of the Jones sisters owned Williams's father. Other names in his narrative can similarly be identified with some confidence, and many of the names of his own family members can be confirmed through archival documents.

Other details, however, are still harder to confirm, and their elusiveness is striking for a slave narrative. Most memoirs of experiences of enslavement published after the 1840s faced charges of exaggeration and duplicity, so authors tried to be precise in their details about white people, and forthright in their naming of enslavers. In contrast to Williams’s work, such narratives often present more difficulty in tracing the African American family members. Williams instead focuses on providing extensive details and obvious clues about his own family, but makes it difficult to trace the white people in his tale. For example, writing in the context of twentieth-century race relations, Williams is careful with his descriptions of influential white slaveholding families in nineteenth-century Charleston. Even several generations after the Civil War, many of these families still held power in Charleston. Members of Williams’s own family also continued to live in the city, and his descendants still live in South Carolina today. Perhaps for this reason, Williams rarely writes negatively about these prominent white families – the Bales, the Deans, and the Wards – but he still shies away from directly invoking their true names.

Nevertheless, those families are quite possibly branches of the intertwined Deas, Ball, and Waring  families: all prominent South Carolina clans who collectively owned dozens of plantation properties and thousands of enslaved people in the Lowcountry region up until the Thirteenth Amendment made the practice illegal. The Mr. Ward he describes appears to be Thomas Richard Waring (1819-1871), who owned a property known as Pine Hill, likely the Pine Top of the memoir. Enslaved people labored over either cotton or rice at this plantation, which was located along the Ashley River outside of Charleston, close to a train station, as precisely recounted in Williams’s memoir. And yet, despite all of the description he provides, the names of several of the families and locations he cites remain a mystery.

While Williams's code used in his memoir is indeed designed to obscure the identity of individuals, he was sure not to obscure the violence of the slave system he was born into. Williams provided sharp critiques of slavery through descriptions of the sale of children and the violence of beatings. Though Williams did not describe experiencing physical violence himself under slavery, he was conscious of the brutality many others endured.

As with all histories and life stories, Williams’s tale is incomplete. His descendants have been able to fill in some details, and archival hunting has uncovered census data, voting records, and other materials; but there is more to know that will add to the complexity of our knowledge of enslaved people’s experiences in the United States.

Please contact Susanna Ashton if you have insights into any of the following questions:

Do you know of other accounts of enslaved people laboring for Officers at Secessionville?

Can you offer any insights into the identities of the Ward, Bale, and Dane families he references, or perhaps you know of another location that might be the Pine Top property?

Do you know anything more about his family life in Vermont and New Hampshire or about his years in Massachusetts?

This history belongs to everyone, and we can learn from one another. Thank you.

← Writing and Publishing a Memoir
Interactive Timeline: The Life and Work of Samuel Williams through His Memoir →