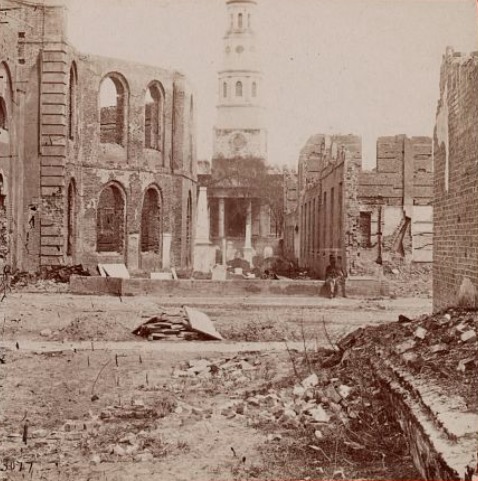 Ruins of Secession Hall and the Circular Church after 1861 fire, photograph by Taylor & Huntington, Charleston, South Carolina, 1865, courtesy of Library of Congress.

On December 11, 1861, a massive fire devastated Charleston. Effectively destroying over 500 homes and the livelihoods of many of the city’s inhabitants, this fire burned prominent local institutions such as the Circular Church and Institution Hall. In Williams’s memoir, he describes the destruction of Charleston, including his former home on Guignard Street, as “the greatest conflagration that has happened in Charleston during my lifetime.” Memories of the fire were still fresh decades later. William recalls, “[t]he sparks seemed to rain down from the heavens as we ran.” He further details how firefighters tried to douse the flames, but largely failed, leaving behind a “mass of ruin.” Williams goes on to relate the destruction of the Roman Catholic Cathedral, whose “costly and magnificent edifice melted away” under the flames of the fire. His observations serve as a rare first-hand account of a fire whose destruction paralleled few others in Charleston history.

At that time, the devastating fire, coupled with the early years of the Civil War, meant that the family that owned Williams, his mother, and his siblings were in desperate financial straits. As a result, they separated his family. In an understated manner typical of Williams, he explains that when the Dane's bankrupt estate was preparing for sale, the enslaved people they owned were summoned for "appraisement," young Williams included. He recalls being confused by how sad all of the enslaved people looked even though they were dressed in the finest clothes.

Several gentlemen came out into the yard. The people stood up, and the gentlemen went among them asking questions. One of them placed his hand on my head. . . . 'Well, my boy,' said he, 'What can you do?’ ‘I can ride, Sir,' I answered, whereupon my mother gave me a gentle nudge which meant, 'Hush.' She then explained to him that my brother and I were not to be sold for she had earnestly requested Mr. Dane not to 'sell' us. She knew that we should receive good treatment as long as we were in his hands, and that if we went with her, the Negro Traders would soon separate us. With many protestations Mr. Dane had promised her that he would not sell us even if he had to go barefoot. He kept his word, but my mother and two little sisters went and for four years, we neither saw nor heard of each other.

Although his mother and sisters may have remained in South Carolina, the cruelty of forced separation from his family impacted how he treated and constructed his own family years later. As an adult, Williams prioritized family above all and labored throughout his life to keep his own children cared for and his family intact. 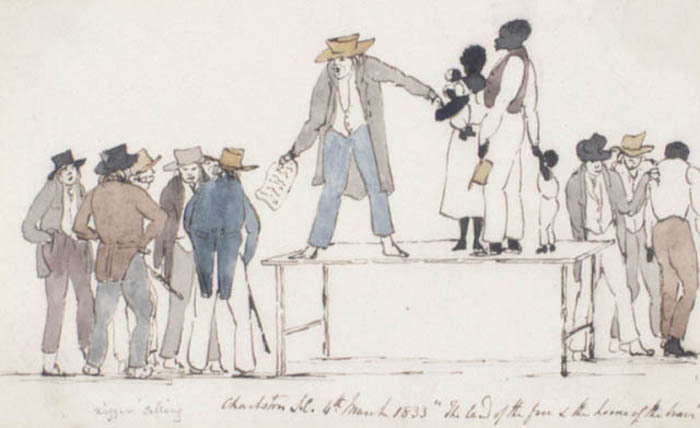 "The land of the free and the home of the brave," watercolor by Henry Byam Martin, Charleston, South Carolina, March 4, 1833, courtesy of Library and Archives Canada.