The chest pains I endured in my youth ultimately subsided when I left Charleston to attend college in Boston, Massachusetts. To my utter surprise and dismay, however, I found that I still encountered blatant racist attitudes when I left the South for the “enlightened North.” This solidified my resolve to expose the nationwide difficulty of including African Americans in all aspects of American life. My work as an academic has particularly provided me with the opportunity to meet numerous scholars, community members, and activists that recognize the crucial roles first children played and the need to document their untold stories and aspirations. I have also met other first children who share my concerns. For example, after meeting Minnie Jean Brown (Trickey) of Central High School fame in the early 2000s, I was encouraged to learn that she and many others also wanted to share their stories. After years of living on the front lines of desegregation, these children—now adults—have rarely been fully recognized locally or nationally. Oral histories are a powerful way to begin capturing these diverse experiences, so we started making plans. 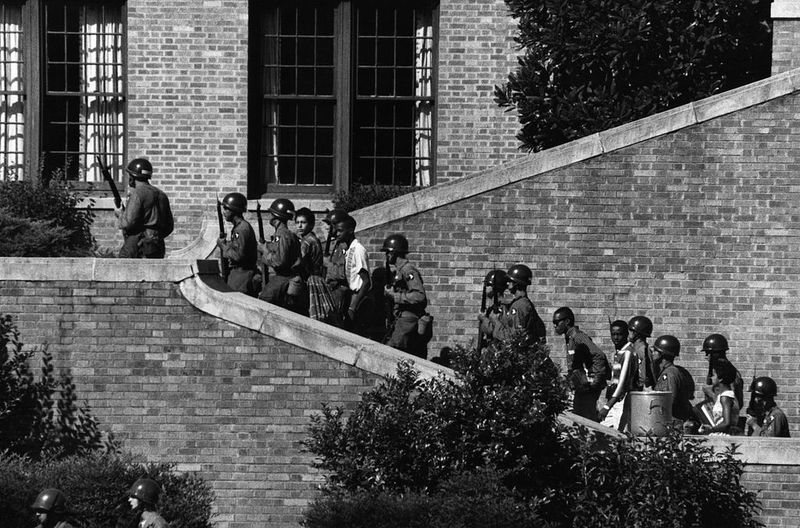 The "Little Rock Nine" being escorted by the 101st Airborne Division of the United States Army into Central High School, 1957, Little Rock, Arkansas, courtesy of the Library of Congress. In the early 2000s, Millicent Brown met one of the Little Rock Nine, Minnie Jean Brown (Trickey), who as an adult also expressed a desire to share her experiences as one of the first children in school desegregation.

As more of us identified ourselves as having been first children in schools throughout the country, our stories made the costs of our activism clear. This pioneering role caused innumerable African American students to endure great sacrifices to make Brown v. Board of Education a reality. Many of us were not physically assaulted, but we did confront psychological pain that is crucial to understanding the toll of racism then and now. Our collective experiences were not identical; nor were they entirely positive or negative. Moreover, African American communities were often divided over whether or not desegregation was an effective strategy for obtaining equal education, but support from our family members and local activist communities played a crucial role that also deserves recognition. Working with numerous partners, I decided to launch the Somebody Had To Do It project in 2006 to generate awareness of their crucial roles in the history of the civil rights movement.

The Somebody Had To Do It project represents a belief that improving racial relations is impossible without serious research, conversations, and confrontations based on actual lived experiences. I also hope that fine arts and humanities professionals will lift their voices, dances, symphonies, and other artistry in recognition of children whose actions brought some semblance of hope for a society on its way to full inclusion and equality. As a first child, I intimately understand that we made great sacrifices to integrate all-White public schools. Today, many may wonder why a young Black person would go through such an ordeal. We did it because we believed everyone deserves a right to equal, quality education, and that could not happen under legal segregation. To me, the words of Mae Bertha Carter, a mother of first children from Drew, Mississippi, captures our motivation exactly—“somebody had to do it.”

← Origins of Somebody Had To Do It
Project History →