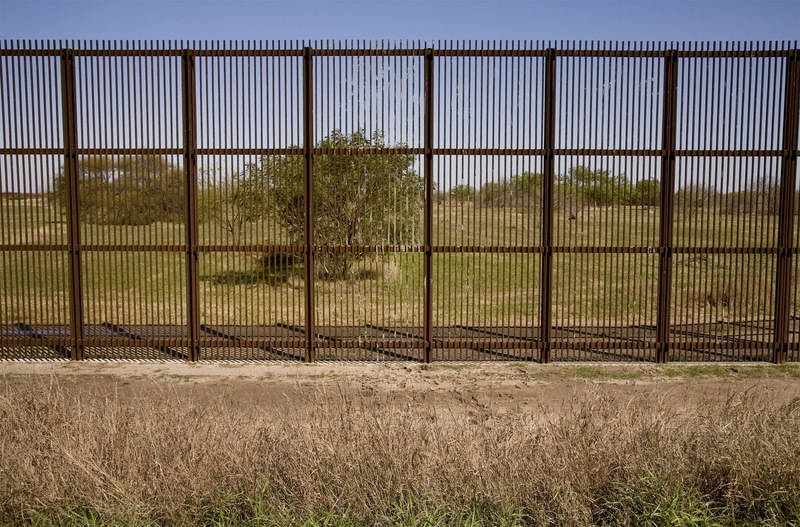 Border wall between Mexico and the United States, photograph by Susan Harbage Page, near Brownsville, Texas, 2010.

Marina López: How did you find out that you were moving here?

Margarita Pérez: I remember that my mother told me that we were moving here. I was at my grandmother’s house in the hallway. We were there and my mom told me the same day. My mom is that type of person who does not share things a month or two in advance. No, she is like, if she thinks about it today, today she does it. That same day she told that she was leaving for the United States, but that she was not going to take me or my sisters with her. She was not going to take us with her, and I remember that I started to cry, and I asked her not to leave me. I did not want to stay behind. I wanted to go with her, and I remember that we cried together, and she decided to take us with her. Sometimes I think that she would have left us if I did not pressure her to take us with her.

ML: You found out that you were coming over, and then how long did it take until you started the trip?

ML: Did you start to travel that same day?

MP: Yes that same day, she had everything ready. Our luggage was ready.

MP: I remember when we left. We took a taxi from my grandmother’s house to the ferry boat. There is a boat to cross to Coatza and from Coatza we took a bus to go—I don’t even remember where, but it was to cross there. I think it was Mexico City, but I am not sure.

ML: How did you all cross over?

MP: We crossed over through the desert.

ML: Somebody helped you cross over?

MP: Yes, somebody helped us to cross over. We were a total of fifteen people, and my mother, I, and my sisters were the only women in the group.

MP: We walked for a day and a half and I remember that my mother, Omar, my mother’s boyfriend, and my two sisters were lost. In the middle of the desert they were lost, and I was left alone with all the men—the guys, the men. I was left alone with all of them. And I remember that the guy told me, the guide, the one that helped us to cross over, he told me that they were making fun of the fact that my mother and sisters were lost.

ML: Your mother and sisters were lost, you were left alone with those people, and they were making fun of you?

MP: Not mocking in a bad sense. It was like—

ML: What a scare, Magui.

MP: He did not seem like a bad person. He was not a bad person, a short time after, he went to look for them, and they laughed again. You could hear because my mother was shouting, “Magui, Magui, Magui.” And then the other one went looking for them. I do not how to say it, it was not a bad mockery, but it was a mockery. It was not the type of situation in which you mock somebody because they are lost. (Sobbing)

ML: Yes, of course—of course it is not something you tell an eleven-year-old child.

ML: Do you have any idea of where you arrived, Magui?

MP: I remember that we got there during noon of the second day that we were walking. We arrived at what looked like a small Indian city. I think that’s how they call it here in the US. By that point we already crossed over. I remember that a man gave us macaroni and cheese for lunch, and I remember that it was the first time in my life that I had tried that food. He gave us that. After that my mother told us, my sisters and I, that we were going to travel in a car to some lady’s house. They, and all the other people that came with us, were going to stay one more night in the desert and cross the next day. They did not want us to stay in the desert because it was too cold at night.

It is very cold at night in the desert. They took us in a car to some lady’s house. She had a daughter. We stayed with her. We did not have any news of my mom until three days later or something like that. Then the guide did not want to bring us back to our mother because while we were at the lady’s house, my mother told me that when they were going to cross everybody got robbed by people that were helping them to cross over. They took my mother, Omar, and other people. Some were able to run away and were not caught, but others were caught and they demanded money from them to let them go. It was not Immigration who caught them. It was our own people, Hispanics, the people helping us to cross over. They were asking for more money in order to let them go instead of letting them cross over.

Once on this side they were caught. It’s complicated to explain. Those who were able to cross over were sort of kidnapped by the people who initially helped them cross over. My mother and others were kidnapped and asked for a ransom in order to let them go. I remember that my mother told me that she told the guide that she needed to go because she had three daughters who already crossed over, but they were refusing to give them back to her until she paid. I remember that they charged one thousand dollars for each daughter. She was able to find the money and pay the guide. Then they gave us back to our mother.

ML: Do you have any idea of how your mother was able to get the money?

MP: I don’t know. I think some of the money came from Omar’s family, my mother’s boyfriend. They wanted the money in dollars. It is a lot of money to send dollars from Mexico.

MP: I just remember that during the time that I spent with the lady and her daughter is that the lady was weird. I do not know what it was. She always had men in her house. I felt strange. During these three days I went to bed without knowing what happened to my mother. I asked the lady, but she told me that she did not know. I remember that before going to sleep I cried because I wanted to see my mother. I had always been close to my mother and—

ML: What did your sisters do during that time?

MP: I suppose that they cried too. I do not know, I was just worried about my mother and I did not give too much attention to what my sisters were feeling at the time.

ML: When you finally united with your mother, did you have any idea of which city you were in?

MP: When we finally were together, I remember that we left to live in Arizona. I remember that it was in Arizona, with a lady that lived there. She came to the US a long time before. She gave us a place to stay for some time, and then we left with my mother.