Williams's Memoir as a Slave Narrative

The long tradition of African American writing includes many genres, but it is perhaps the nineteenth century autobiographical tradition that most influenced the course of contemporary African American literature. Within this autobiographical tradition, the writing of “slave narratives” dominates the popular imagination and cultural understanding of the black experience in the United States from the mid-seventeenth to the mid-twentieth century.

Cover page of Incidents in the Life of a Slave Girl, Harriet A. Jacobs, 1861, courtesy of Documenting the American South, University of North Carolina-Chapel Hill.

Today, the term “slave narrative” in North America can broadly refer to twentieth century interviews with survivors, eighteenth century confessions by enslaved people who had been jailed for rebellion or arrested for one reason or another, seventeenth century captivity or religious conversion narratives, and even contemporary movies or television shows that focus on the lives and struggles of enslaved people.

For most scholars, however, the term is usually limited to first person accounts, either composed or dictated by individuals who directly endured legal bondage and who told of the experience of enslavement as a defining part of his or her life experience. While there is no hard and fast rule, the most important criterion is whether an account is by someone who has survived slavery. While the term is applied to narratives written as far back as the eighteenth century, slave narratives most commonly refers to narratives written during the era of abolitionist writing (roughly 1830-1860) or composed in the four decades following the U.S. Civil War.

Many twentieth century narratives are better understood as “interview narratives” that were assembled and transcribed over the years. The most significant interview collection is that of the Federal Writers’ Project of the Works Progress Administration (WPA), which includes some 2,300 interviews with African American survivors of slavery conducted between 1936-1938. This collection provides invaluable first-hand accounts of enslaved life, but these accounts were often not constructed by the interviewees on their own terms, and therefore suffer from limitations as historical texts. As verbal interviews, government workers often erratically transcribed these accounts, and many of them were simply brief answers to structured questions. Due to the timeframe of the interviews (conducted during the 1930s), the interviewees were people who had experienced slavery as children, with few direct memories and impressions of the institution as an adult. That, coupled with the power imbalance between predominantly white interviewers hired by the Federal Writers’ Project and their elderly black interviewees—who were often impoverished in the context of the Great Depression and in need of government assistance—meant that WPA narratives can appear skewed. Many accounts include nostalgic or relatively benign memories of slavery, in stark contrast to far more brutal and horrifying accounts of slave life given by those who experienced the institution as adults, and who were able to tell their story without mediation from white government actors. While the experiences of slavery were ultimately diverse and individual, the historic contexts of how and when “interview narratives” took place are critical for understanding what shapes different accounts.

Samuel Williams wrote his memoir well after the era of antebellum abolitionist narratives, but also a full generation before the Federal Writers’ Project’s “interview narratives.” His work, however, shares qualities from both traditions. In addition, his work is a literary text arising from the written tradition rather than from a recorded interview. He does recount anecdotes of his youth with some warmth, and seems to consciously downplay many of slavery’s horrors, much like many interviewees for the Federal Writers’ Project. But his story also seeks to powerfully connect enslaved life to an experience of struggle and survival, through Reconstruction and into the early twentieth century. 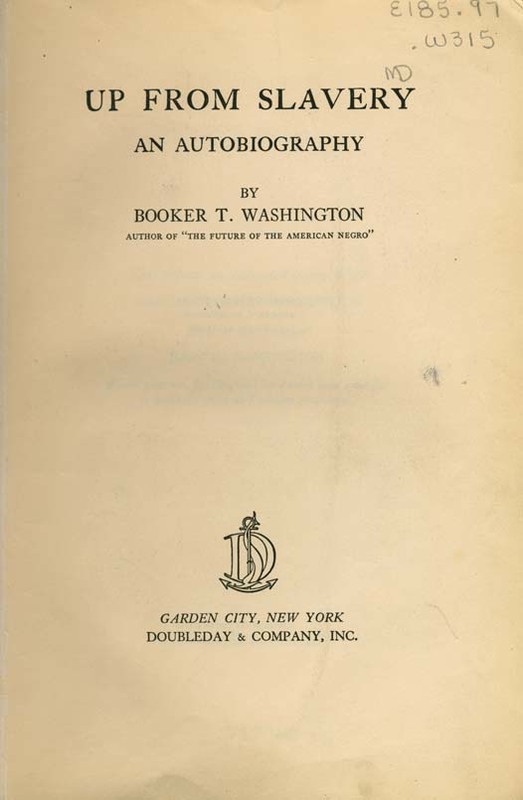 Cover page of Up From Slavery, Booker T. Washington, 1901, courtesy of Documenting the American South, University of North Carolina-Chapel Hill.

As a first-hand account of his life shaped by the system of slavery, Williams’s memoir ultimately falls into a traditional definition of the “slave narrative” – particularly that of the postbellum era. It is particularly intriguing to speculate as to whether he was familiar with Booker. T. Washington’s enormously successful memoir Up From Slavery (1901), which chronicled a similarly ascendant life arc, framed by optimism and confidence in the rightness of the American people and the promise of a new century. In later years, when Williams moved in with his daughter Susan, who had successfully married into the professional class (she married a prominent Boston dentist and lawyer who lived in a townhouse in Cambridge), we can see the astonishing way in which Williams’s hard work and sacrifices could be framed into a story akin to the well-known saga of Booker T. Washington’s ascendancy.

Whether wholly original or somewhat stock, Williams’s life story was told with a relentless emphasis upon community and how an individual’s story could only be understood as part of a whole. Hence this exhibit seeks to honor that impulse: by contextualizing and building out his life story and that of his family, not only can we better see what life was like for enslaved and formerly enslaved people during his lifetime, we can also better understand how individuals who had to depend upon one another to survive interlocked their stories with one another.

Though he was emancipated as a young teenager, Williams demonstrates that his life story could never be separated from his own bondage, nor separated from the impact that slavery had on the people around him. Williams tells his own story, but he dedicates even more space to telling the stories of the people who did not have the opportunities that he had. He bears witness for those who died in slavery or soon afterwards, shares stories of people who were illiterate and destitute, and recounts a story of slavery that decentralizes himself in favor of a broader community that he identified with.

← Who Was Sam Aleckson?
Characteristics of Slave Narratives →