Writing and Publishing a Memoir 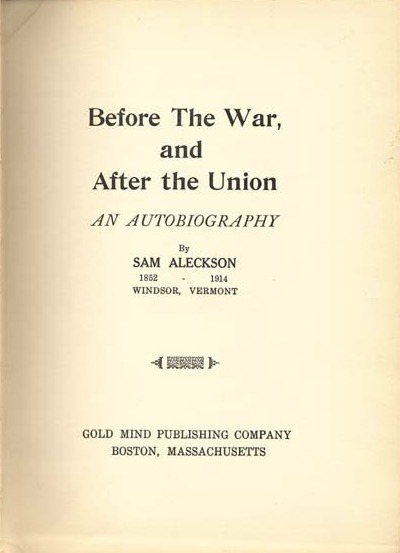 Cover page of Before the War and After the Union, Sam Aleckson, Boston, Massachusetts, 1929, courtesy of Documenting the American South, University of North Carolina-Chapel Hill. 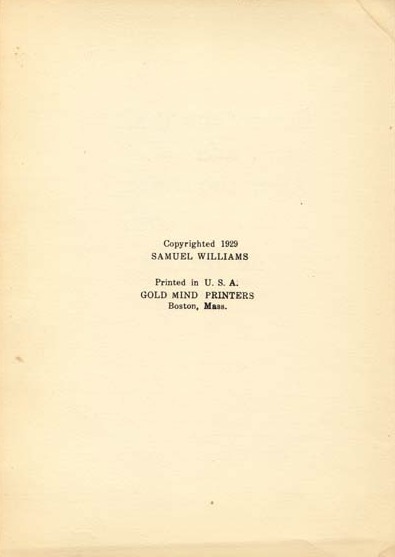 Page from Before the War and After the Union, Sam Aleckson, Boston, Massachusetts, 1929, courtesy of Documenting the American South, University of North Carolina-Chapel Hill.

Williams’s memoir has a unique publication history. Written later than most nineteenth century slave narratives, he did not complete the manuscript draft until after 1914, by which time he was approximately sixty-two years old. Williams evidently edited the manuscript further in the mid-1920s, but it was not published until 1929. It is hard to know why he and his family were uninterested or unable to secure a publisher for so many years, but we can speculate that he might have approached some people with literary connections and found both inspiration and discouragement.

His own account of the memoir’s composition is a bit vague. As he recounts it, he was advancing in years and feared that he was going blind (this was likely between 1914 and 1920 or so). Hence he wanted to write his life story down while he still could:

When I began this unpretentious narrative, I was almost sightless. I had just recovered from a severe attack of illness, during which for a time I became totally blind, and after I was better my eyes seemed hopelessly affected. . . My life had not been wholly uneventful; I had been of an observant turn of mind from my youth. What if I could set down the events that had come under my observation in some connected form? Might I not thereby be able to earn something to ward [sic] my support when I could no longer see!

Sometime after 1914, Williams finished his manuscript for Before the War and After the Union, chronicling his life up until 1914, where he closed out his story living with his daughter as an in-home servant for another family in Windsor, Vermont. However, in 1924, Williams revisited his manuscript, and it was published in 1929 with Gold Mind Press, a business created by his son-in-law, a lawyer. This private press appears to have existed for printing legal documents and which only ever seems to have produced this one book.

While the story of Williams’s illness provides some insight into the emotional urgency of the project and might also explain why, upon his recovery, he was less concerned with doing anything with the text, there are still many questions about what might have happened during those years. For Williams had some surprising and fortunate connections with the literary world which might well have influenced both its construction and its failure to find a publisher.

The situation is this: During the years between 1914 and at least 1920 or so, Williams worked for families along the New Hampshire and Vermont border, and he was certainly employed by the Thomas family of Windsor, Vermont, as a live-in servant by 1920, if not before. Since his memoir lists the location of its composition as Windsor on its own cover page, it seems probable that he wrote his book while living with the Thomas family. 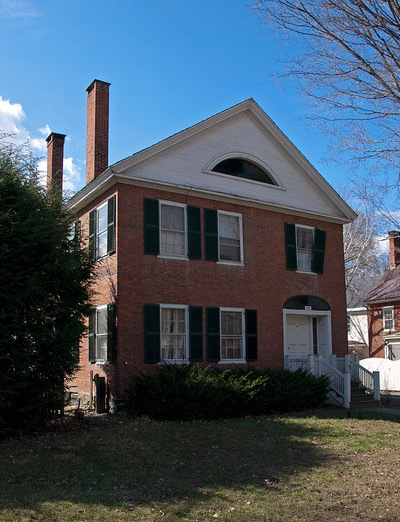 The Thomas family 1920s home, photograph by Benjamin Barkley, Windsor, Vermont, 2015. Samuel Williams and his daughter lived at the Thomas home in the 1920s when Williams worked for the family. 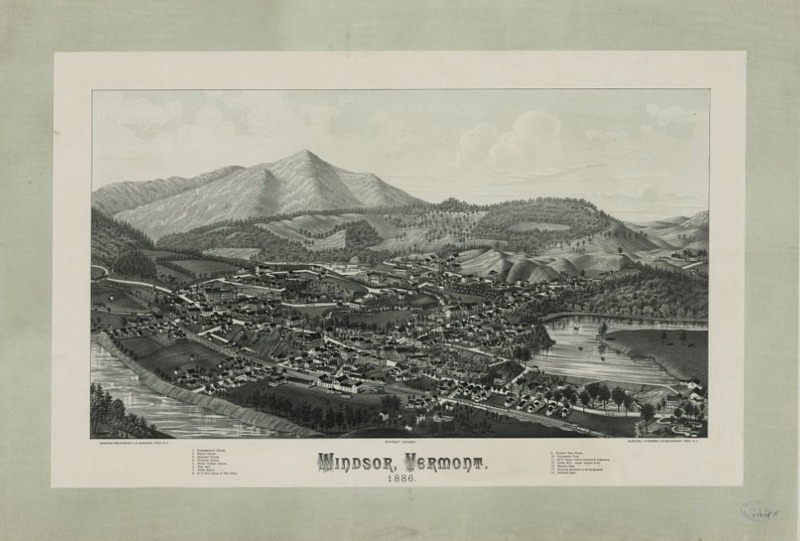 Map of Windsor, Vermont, January 3, 1887, courtesy of Library of Congress.

This job may have proved serendipitous, for, by chance, Williams had ensconced himself into the house of a man with tremendous literary connections. Thomas Head Thomas was a Harvard-trained art historian and author who was the brother-in-law of Maxwell Perkins, the most famous editor of literary America in the early 20th century (editing works by Ernest Hemingway, Thomas Wolfe, and F. Scott Fitzgerald). Since Perkins also maintained a summer house in the small town of Windsor during these years, we can reasonably imagine that the two related families interacted with one another a great deal; interactions which Williams would have certainly have been aware of. To be sure, Williams never mentions Thomas, much less Perkins. And there is no evidence that either Thomas or Perkins knew of, much less encouraged or advised Williams in any way on his personal manuscript. Nonetheless, that Williams and his grown daughter, Susan, were living in a house run by an author with myriad prominent publishing and literary connections does raise some tempting speculations:

Was Williams inspired to write, only later to receive condescending or discouraging responses from his employer and his circle? Did he write and receive encouragement, only to be still unable to place his memoir with an editor or condescended to or discouraged by these contacts? We may never know. But the fact that this modestly educated yet sharply inquisitive and reflective man took it upon himself to pen the story of his life in order to bear witness to his experiences before his eyes might fail him surely reflects upon the fact that he was living in a house where words mattered and books were currency.

Whatever the reason, Williams’s unpublished manuscript remained within his own family and did not appear in print until 1929, long after his Windsor sojourn had ended and he was living in Cambridge, Massachusetts. It appears that it took Susan’s husband and her stepson to finance and arrange for its publication under an imprint of their own creation, Gold Mind Publishers of Boston. This means that Williams’s book was not published with the help of a white-owned gatekeeper or publishing house, or even with the introduction or endorsement of an influential white guarantor. Rather, the 1929 publication illustrates the family’s determination and faith in the importance of Williams’s testimony. 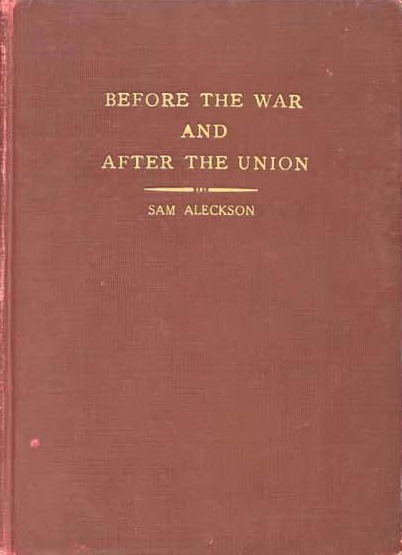 Book cover for Before the War and After the Union, Sam Aleckson, Boston, Massachusetts, 1929, courtesy of Documenting the American South, University of North Carolina-Chapel Hill.

The memoir’s appearance through an independent publisher may also help explain why it is such a distinctive manuscript. As a privately produced work, brought into the world by a family of black professionals, the memoir did not have to adhere to any vetted agenda for white publishers, such as comforting white audiences with purely nostalgic memories of plantation life. Instead, the work reflects Williams’s own complex experiences, needs, and perspectives. Even when his reflections seem nostalgic, he also hedges. For example, his description of Mr. Ward at Pine Top is revealing. While Williams notes that Mr. Ward was “what was called a ‘good master,’” and that “His people were well-fed, well-housed and not over-worked,” he also carefully adds that, for Mr. Ward, “There were certain inflexible rules however, governing his plantation of which he allowed not the slightest infraction, for he had his place for the Negro. Of course, the Negro could not stand erect in it, but the Negro had no right to stand. His place for the Negro was in subjugation and servitude to the white man.”

Ultimately, Williams makes his views on slavery clear in his memoir: “There is nothing good to be said of American slavery. I know it is sometimes customary to speak of its bright and its dark sides. I am not prepared to admit that it had any bright sides, unless it was the Emancipation Proclamation issued by President Abraham Lincoln . . .”

Before the War and After the Union bears witness to many experiences and lives discarded, passed over, ignored, destroyed, and repurposed. In its modest way, Williams’s tale is an effort to reinsert a voice of triumph over a dark past.