Escalating Tensions Before the Strike 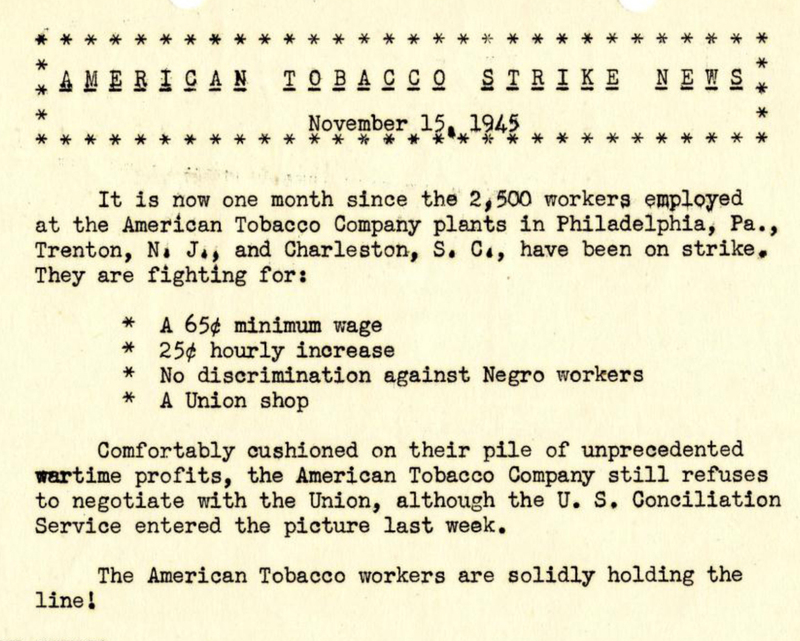 In the months leading up to the Charleston strike, tensions escalated between the union and the American Tobacco Company. With World War II finally over in 1945, Local 15 representatives demanded that Company executives fulfill their promise to provide retroactive pay. Workers approved a new FTA-CIO contract on September 25, 1945, which called for a raise and back pay. In early October 1945, the National War Labor Relations Board (NWLRB) also ordered American Tobacco Company management across the country to pay workers wages withheld during the war, from December 1944 to October 1945. Company executives ignored the ruling. Charleston’s Cigar Factory manager, Harold F. McGinnis, specifically refused to address this issue with Local 15 president, Reuel Stanfield, which meant that he failed to honor both the union contract and the NWLRB ruling.

Reuel Stanfield had been a labor activist since the 1920s, and brought significant organizing experience to Charleston’s Cigar Factory. Throughout the 1920s and 1930s, he participated in a number of labor strikes in cities along the West Coast, in the Great Lakes region, and overseas. Stanfield was hired by the national FTA office in 1934 to convince strikebreakers (or “scabs”) to not take jobs from striking workers. By 1935, he was arrested and later convicted of possessing dynamite in the trunk of his car while picketing. Stanfield served three years at San Quentin State Prison in California. Upon his release, he continued his labor activism. In the early 1940s, the FTA sent Stanfield to Charleston to help organize the Local 15 Cigar Factory workers.

On October 1, 1945, McGinnis abruptly fired a black male worker at Charleston’s Cigar Factory. Combined with workers’ demands for retroactive pay at all American Tobacco Company Cigar Factories, the Charleston manager’s actions triggered uproar. The black worker, who was married, was fired because his white female supervisor accused him of “taking familiarities” with black female workers. Allegations from a white supervisor of moral impropriety posed a serious threat to black factory workers’ jobs because they were often skewed by racial prejudice. With rumors swirling throughout the factory about the dismissal, African American workers became angered by the lack of due process. To management, workers were upset about the allegations against the fired worker’s morality; to union members, the problem ran deeper. They saw the dismissal as an indication of broader issues of race and gender discrimination in the factory’s hiring and firing processes.

On Wednesday, October 3, Reuel Stanfield worked with Local 15 union stewards to mobilize an all-day sit-down strike. Over the course of the next two days, approximately one hundred black workers remained idle by their machines, sometimes singing spirituals in groups of twelve or fifteen. On October 4, nearly nine hundred African American workers walked off their jobs after management failed to return the fired worker to his position. McGinnis told the press that the workers were striking “for undisclosed reasons.” On October 5, McGinnis met with union representatives and agreed to address the workers’ various grievances.

Following this meeting, McGinnis offered only vague plans for how management would address the workers’ complaints, and his pace for issuing retroactive pay was slow. His response typified a broader pattern in the actions of American Tobacco Company management as numerous Cigar Factory managers denied wage increases and continued to engage in discriminatory actions against their employees. As a result, the national offices of the CIO encouraged a national solidarity strike among the local FTA chapters in the American Tobacco Company’s cigar factories in Philadelphia, Pennsylvania; Charleston, South Carolina; and Trenton, New Jersey. On October 15, Philadelphia’s FTA Local 186 went on strike, followed by Charleston’s Local 15 one week later. Trenton’s Local 56 members walked off their jobs on October 25.