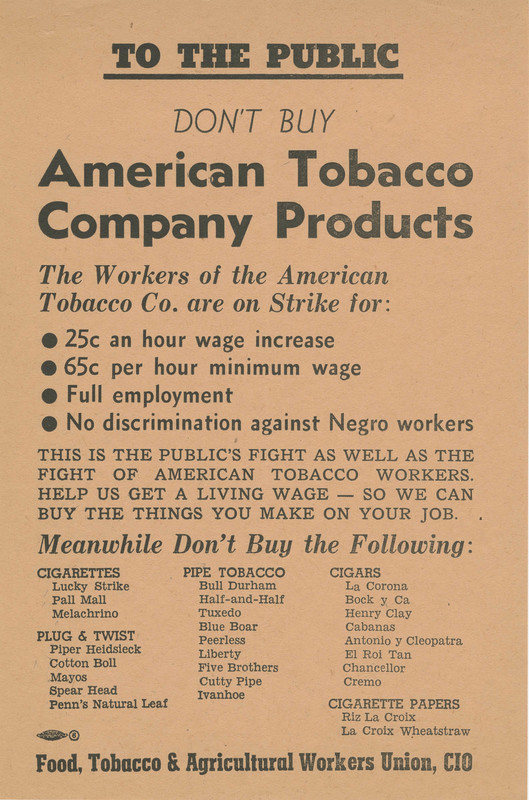 Leaflet urging picketers to participate in an economic boycott of American Tobacco Company products, issued by the FTA-CIO, ca. 1945, New York City, New York, courtesy of Avery Research Center. In Charleston, Local 15 members distributed leaflets such as these to encourage others to join the boycott.

Despite significant local pressure, McGinnis refused to budge on the union’s demands, or meet with Local 15 representatives. Consequently, the national CIO union president urged picketers to continue striking, and to participate in an economic boycott of American Tobacco Company products. This boycott served to demonstrate unity and hurt the company’s public image. National leaders also urged members to flood American Tobacco Company offices with notes, letters, and resolutions in support of the strike. Local 15 strikers, and their allies, removed cigars and cigarettes from local vending machines, passed out leaflets, and urged others to join the boycott.

The strikers’ persistence paid off. McGinnis agreed to meet with union stewards and they brokered a deal. Federal pressure from the NLRB and the threat of federal oversight also persuaded management to negotiate with the factory workers. After nearly five months, Charleston’s Cigar Factory strike ended the last week of March in 1946.

By that time, only a few of the striking stalwarts remained on the picket line, and nearly all of the protestors were black. Factory management offered workers a pay increase of just eight-cents per hour. Some of the racial restrictions for skilled job positions appeared to diminish after the strike, and local union members gained a sense of empowerment. Their efforts drew the support of the federal government and forced the Cigar Factory management to make at least some concessions, which was previously considered impossible by many workers.