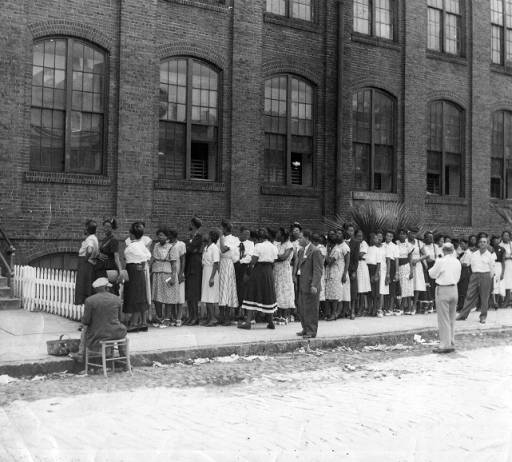 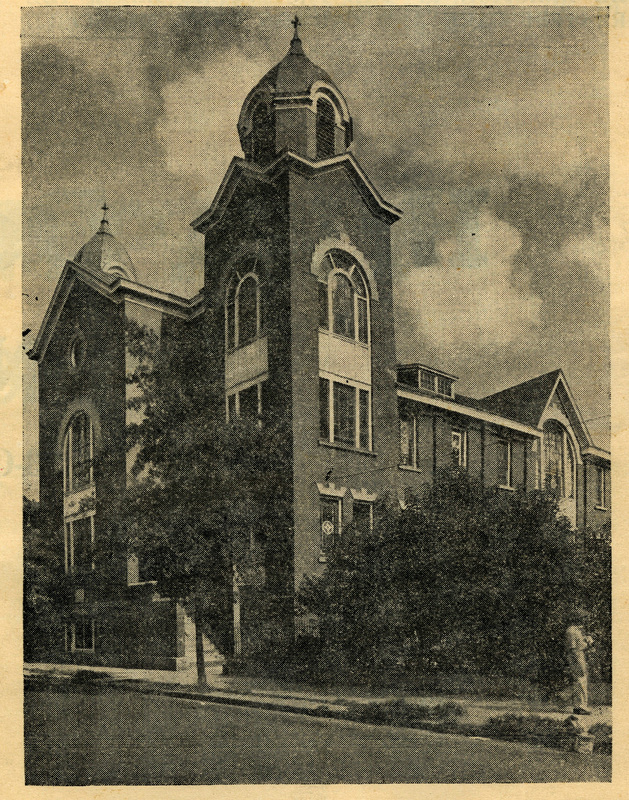 Over one thousand Cigar Factory workers in Charleston walked off their jobs on October 22, demanding back pay and a pay increase of twenty-five cents per hour. In addition, they sought non-discrimination clauses in the Cigar Factory’s hiring and firing practices, paid medical benefits, and a closed union shop that would require union membership as a condition for employment. While most of the strikers were African American women, some black men and white workers also joined the strike. They resolved not to return to work until their demands were met, along with the demands of their fellow strikers in Philadelphia and Trenton.

For black female workers, the strike offered hope for securing higher pay and greater long-term job security with the establishment of a firm non-discrimination policy. For white women and the factory’s white and black male Local 15 strikers, combining forces across racial lines provided the prospect of better pay by presenting a united working-class front. Since being chartered in 1944, Local 15 typically held separate white and black union meetings in Charleston, but on October 26, Local 15 held its first integrated meeting at the African American Morris Street Baptist Church. This gathering demonstrated that union leaders saw solidarity through black and white coalitions as a strategy for addressing the workers’ concerns. In a union newsletter, African American union representative Marie Hodges summarized the benefits of an interracial union by asserting that the FTA-CIO Local 15 represented “one of the world’s greatest institutions in the breaking down of racial, religious and national prejudices.”

Despite these promising developments, ongoing racial and gender divisions between workers revealed the limits of white worker support for the strike. For example, machinists held the most high-paying positions in the factory, and only white men could access these positions. Because of the benefits they received from race and gender discrimination, many white male workers, particularly the machinists, saw interracial solidarity and supporting civil rights activism as a threat to their economic security and clout in the factory. 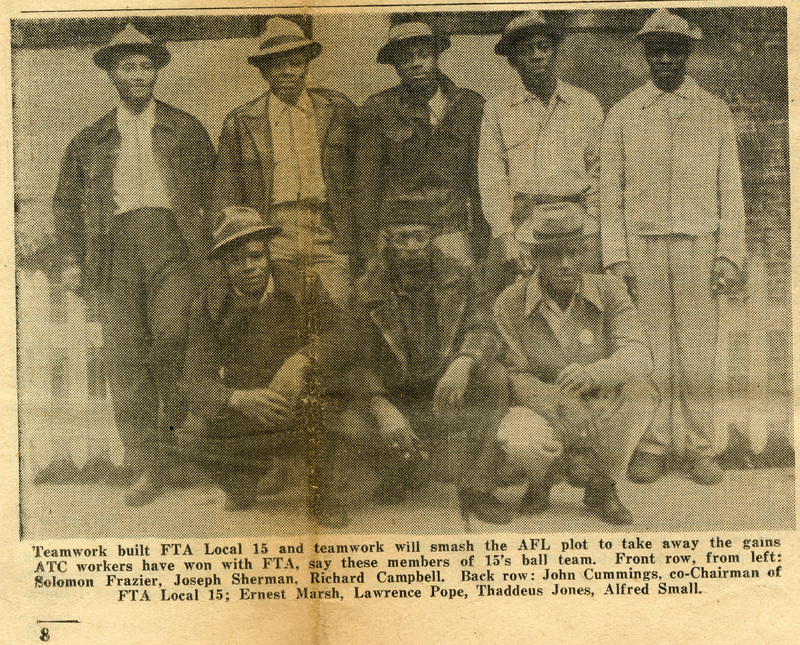 Ultimately the strike began with a large group of predominantly black workers picketing the factory from morning until evening, carrying placards and proclaiming their demands. According to the Charleston Evening Post, young female picketers “sprightly step[ped],” giggling and smiling at civilian onlookers. Older workers sang hymns and spirituals. African American picketer Lucille Simmons, a longtime factory worker, canvassed neighborhoods rallying Charlestonians to support the Cigar Factory strike. In her rich and powerful voice, she changed the spiritual, “I Will Overcome One Day," into “We Will Overcome.” The song came to signal the end of the day for picketing strikers. Union activist Lillie Mae Marsh Doster recalled how Simmons’ rousing rendition was “almost like a prayer of relief” for the struggles faced by Cigar Factory workers as they sang together, “we will win our rights someday.” 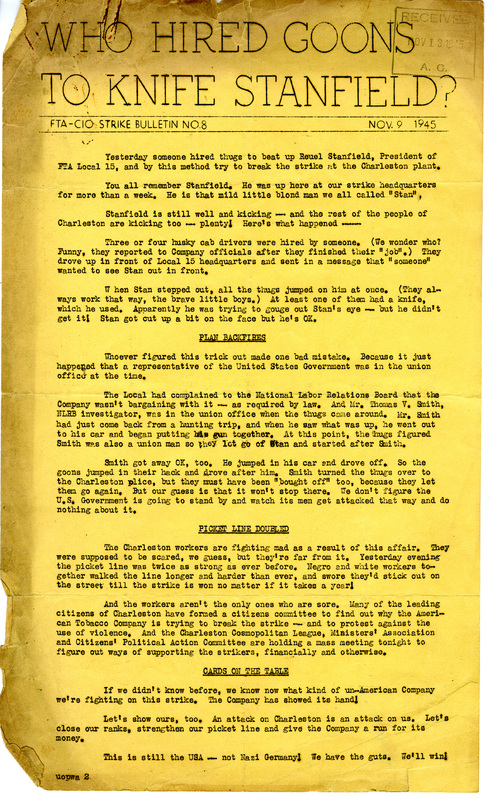 When McGinnis declined to issue retroactive pay in workers’ paychecks, Stanfield and other union representatives lodged a complaint with the National Labor Relations Board (NLRB) against the American Cigar Factory for its failure to heed the federal ruling of the previous year. As a result, NLRB official Thomas V. Smith came to Charleston to investigate the case on November 8. Smith witnessed Stanfield and other protesting Cigar Factory workers facing forceful resistance throughout the strike from both anti-labor segregationists and Charleston’s city police officers. According to Stanfield, on November 8, four “husky cab drivers” attacked him in the union headquarters. They gashed Stanfield’s face with a knife, and NLRB official Smith, picketers, and community members witnessed the assault. Smith reported and identified the four attackers to the local police, but the officers chose to release the four aggressors without filing charges.

Smith and the NLRB ruled in favor of Local 15 and ordered the company to repay the workers $120,000. Stanfield called for a massive demonstration on November 15 at the factory’s office. By the end of the day, the crowd swelled to more than one thousand black and white workers, and the Cigar Factory finally provided their back wages.

Despite rumors that workers would return to work after receiving their back pay, the national FTA offices insisted that the Cigar Factory strikers in Philadelphia, Trenton, and Charleston remain unified and dedicated to forcing management to address all of their grievances. They had received their wages, but there was little movement on issues of higher minimum pay, discrimination, and a union shop. The strike continued. 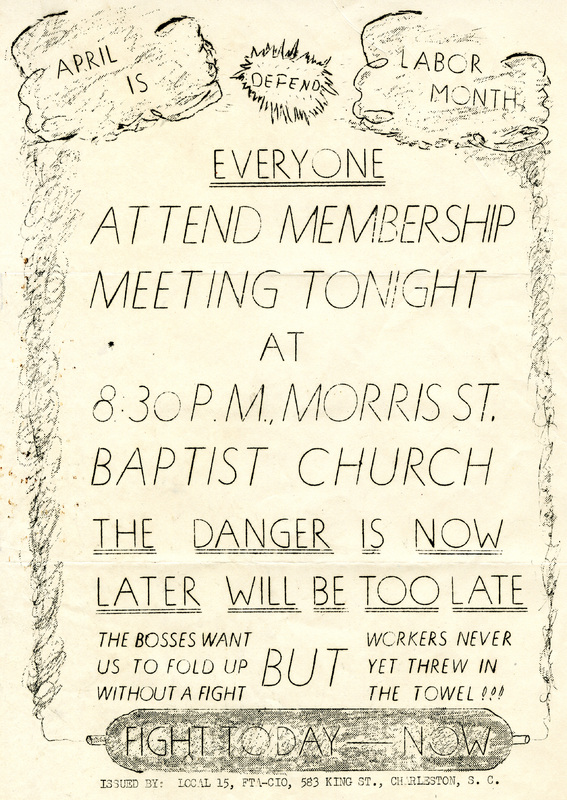