The Bachelor's Retreat and the Civil War 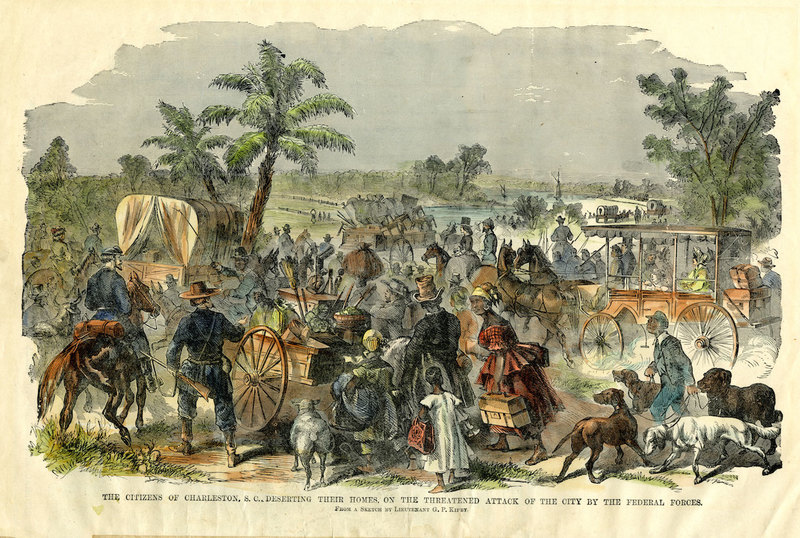 "The citizens of Charleston, S.C., deserting their homes, on the threatened attack of the city by the Federal Forces," The Soldier in Our Civil War, Charleston, South Carolina, c. 1861-1865, Charleston Museum Illustrated Newspaper Collection, courtesy of the Charleston Museum Archives. Droves of Charlestonians evacuated the city as General William Tecumseh Sherman and his Union forces drew near. Many evacuees hastily sold off property assets in order to expedite their departure. Nat Fuller stayed in the city and continued to grow his restaurant business.

As the tables of the Bachelor’s Retreat filled with older white married men, rather than bachelors, Fuller began to post advertisements to attract new customers. These advertisements provide further insight into what he served:

All Gentlemen, whether over or under forty-five, are liable to find a GOOD
DINNER and LUNCH at the BACHELOR’S RETREAT . . . The Bille of Fare
Tuesday, 2d inst., includes Oyster and Calf Head Soups, Turkey, Wild Duck,
Roast Beef, A la Mode Beef, Roast Lamb, Chicken Pie, Oyster Pie, Vegetables
and Dessert Courses.

These bills of fare are restrained compared to the banquets of the 1850s. From Lincoln’s Proclamation of Blockade on April 19, 1861 until the end of the war, obtaining access to quality meats and vegetables was an extraordinary challenge in Charleston and throughout the South. One mark of Fuller’s ability as a restaurateur was the consistency of his gourmet style of cooking throughout a general period of dearth. This required having a network of procurers and suppliers across Confederate and eventually Union lines. 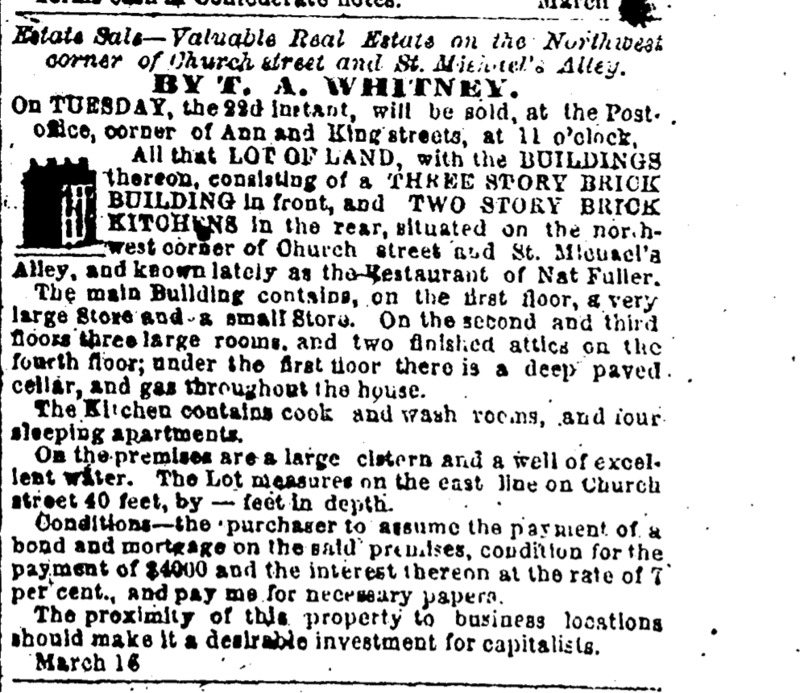 Estate Sale—Valuable Real Estate on the Northwest corner of Church Street and St. Michael's Alley, Charleston Mercury, Charleston, South Carolina, March 19, 1864, courtesy of America's Historical Newspapers. When Fuller fell ill in late 1863, he was forced to close the Bachelor's Retreat restaurant and was unable to meet his financial obligations. When he defaulted on a payment, the trustee of 77 Church Street decided to sell the property. In March of 1864, the entire building—which included the Bachelor's Retreat—went up for sale. Fuller was able to keep the building, however, until his death in 1866.

For two years Fuller persevered in maintaining fine dining in the city. Then, in autumn of 1863, he fell gravely ill. The restaurant ceased operation from late October until the week before Christmas. On December 23, 1863 he announced his recovery and reopening, but the hiatus put the Bachelor’s Retreat into financial peril. In addition, Charleston’s white residents grew increasingly concerned about their wealth as the Confederacy began to falter. When he defaulted on a payment of his bonds, the trustee of 77 Church Street decided to sell the property. In March of 1864, the entire building—which included the location of the Bachelor's Retreat at 77 Chruch Street—went up for sale.

Fuller needed another restaurant venue, which meant a house with water, space, a sizable kitchen, and an icehouse. He found a marginally useful building at 25 Washington Street, well out of the business district. He soon announced, “Turtle Soup for sale on June 28, 1864, $2.50 a quart.” Still, rumors circulated over the summer that Fuller had left the business entirely. In September, Fuller addressed the credulous public: “The Subscriber respectfully informs the public that his establishment, at No. 25 Washington St. still continues open, (rumors in the country to the contrary notwithstanding) and that his bill of fare for dinner to day, at three o’clock, will be as follows: Green Turtle Soup. Shrimp Pie. Wild Turkey.”

As Union General William T. Sherman carved through Georgia from Atlanta to Savannah over the final months of 1864, panic began to seize Charlestonians. White citizens began evacuating the city, and they attempted to dispose of their property on the best terms that they could obtain. On January 19, 1865, Fuller took advantage of the situation. A reporter in the Charleston Mercury announced, “That ancient and well-known caterer, Nat Fuller, has just occupied a larger and more commodious house, next door to his late establishment on Washington Street, where he continues to serve up wild turkey, venison, and all the delicacies of the table in his usual excellent style.” He called his new restaurant “Nat Fuller’s Restaurant and Eating House.”

On February 18th, the Mayor of Charleston surrendered the city to Union Brigadier General Alexander Schimmelfennig and Union troops, including the 21st Regiment Infantry of U.S. Colored Troops. By the provisions of the Emancipation Proclamation, as soon as the Union Army controlled Charleston, Nat Fuller, along with all other enslaved African Americans in the city, became free. On George Washington’s birthday, February 22nd, Union General Webster (Sherman’s Chief of Staff) celebrated with a party at Fuller’s new restaurant. One of Fuller’s commercial connections was in charge of the invitations. According to a reporter for the New York Tribune, the dinner was “probably the best that has been in this lean and empty-bellied city since the blockade began.” The company was informed that the dinner service employed was the same that had been used when General Beauregard held a ball celebrating the capture of Fort Sumter in 1861. 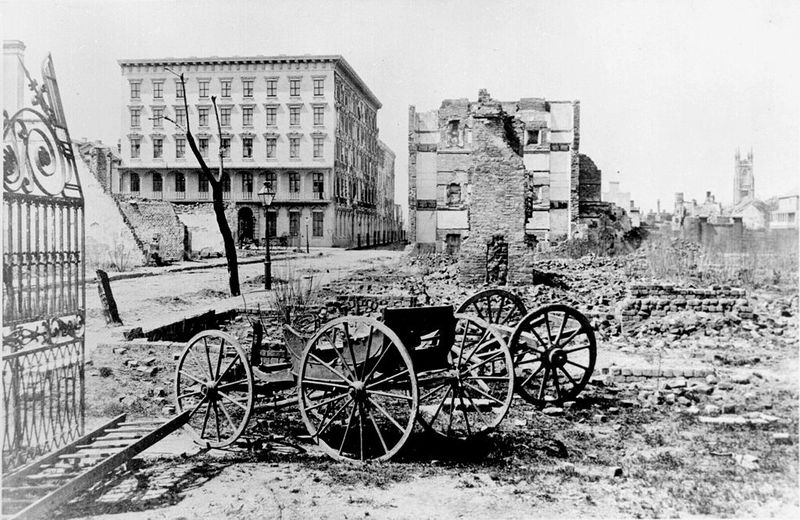 The Mills House hotel and a city block in ruins at the end of the Civil War, Charleston, South Carolina, ca. 1865, courtesy of the National Archives.

On March 15, 1865 the Edgefield Advertiser noted in its “Charleston News” section that, “Nat Fuller advertises that he has resumed business at his old stand.” Within three weeks of the Union occupation of the city, Fuller again possessed the Bachelor’s Retreat at 78 Church Street. Sometime in the spring of 1865, he hosted his famous “miscegenation dinner” at the restaurant to celebrate the end of the war. No guest list survives or bill of fare, but based on contemporary accounts the elite guests most likely included occupying Union officers and individuals who had been free people of color before Emancipation, as well as newly free African Americans in positions of power like Fuller. As Abby Louisa Porcher notes in her letter, this feast gave them a long awaited opportunity to “sit on an equality” and sing songs and give toast to “Lincoln and freedom.”

Did defeated Confederate members of Charleston’s white elite also come to Fuller’s feast to dine alongside free blacks and Union officers? Perhaps. Though the evidence is limited, when Porcher describes Fuller’s “miscegenation dinner” in her letter, she associates it with another event in the city: the presentation of United States flags by two young black women to the 54th and 55th Massachusetts Regiments on the Citadel Green in March. She notes that at this event, “black sentinels turned back white citizens reprimanding them for their passes not being correct.” These white citizens were presumably Confederates. In the early days of defeat, the old white southern order had to confront the conditions of the new, and perhaps some still sought access to the city’s major events.

Though the guest list of Fuller’s “miscegenation dinner” is lost, Fuller certainly had connections to the people of Charleston, white and black. He spent his entire life navigating the race and class lines of this city—in markets, restaurants, pastry shops, townhouses, banquet halls, and on ships and railway cars. For a brief time, Fuller’s networks and well-known culinary skills may have brought together a radically mixed gathering in 1865 that would have been unheard of before the war. For years and decades after the Civil War, such a gathering in Charleston would still be rare. In South Carolina and throughout the U.S. South, white discrimination and vigilante violence against blacks after the Civil War led to racial segregation and black disenfranchisement that would persist well into twentieth century.