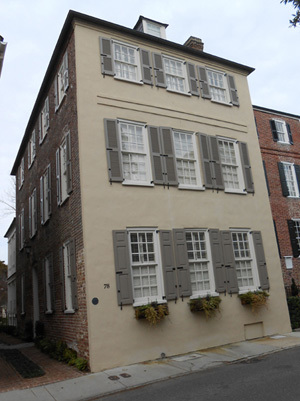 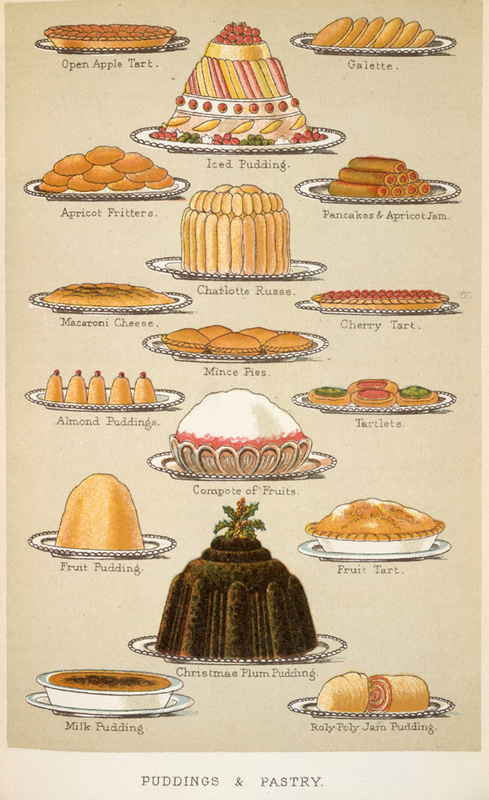 "Puddings & Pastry," drawing from Beeton's Book of Household Management, edited by Isabella Beeton, 1861, courtesy of the Wellcome Library. Eliza Seymour Lee's mother, Sally Seymour, was taught by a London-trained pastry cook. Seymour worked for planter Thomas Martin until she was manumitted in 1795. As a free woman of color, she set up a successful business as a baker, pastry cook, and caterer. In the nineteenth century, the term "chef" was exclusively used in France. For this reason, Fuller, Seymour, and other American culinary professionals in this period are referred to as "cook." Included in this image is a Charlotte Russe, a favorite dessert on Fuller's culinary repertoire.

Fuller began his culinary apprenticeship in Charleston in 1827, at fifteen years old. In the 1820s and 30s, his owner, William C. Gatewood, took part in social engagements throughout the city, which connected him to various renowned African American cooks, caterers, and event managers. At that time, however, newspaper notices show a marked preference for one event manager in particular, John Lee— a free person of color. When Gatewood later became a steward for various social organizations in the city in the 1840s and 50s, he followed this preference and acquired Lee’s services regularly. While John Lee managed events, his wife, Eliza Seymour Lee, led the culinary preparations. She also regularly trained cooks in the city. Based on her prominent standing in Charleston’s elite culinary network and John Lee’s renowned skills, Gatewood chose Eliza to supervise Fuller’s apprenticeship.

John and Eliza Seymour Lee were both free people of color in Charleston who collaboratively ran multiple successful businesses. In 1827, the probable year that Nat Fuller entered his apprenticeship under Eliza Lee, she presided over a catering office and café on Tradd Street. She inherited the business in 1824 from her mother, a pastry cook named Sally Seymour. As cook and mistress to planter Thomas Martin, Seymour had been trained by Adam Prior, a London-trained pastry cook. In 1795, Martin manumitted Seymour. As a free woman of color, she set up a successful business as a baker, pastry cook, and caterer. At that time, Seymour was one of the only African American women in the city to run her own business. For many of Charleston’s slaveholders, she was also the preferred instructor for young enslaved house servants, which made her the matriarch of an elite culinary dynasty in the city. Along with a dozen or so apprentices, Eliza learned her mother’s skills. Upon Seymour’s death, Eliza also inherited her mother’s position as caterer and culinary instructor. Nat Fuller eventually became one of her most prominent pupils.

In the late 1820s, Eliza Lee’s husband, John Lee, purchased the Dewar house at 92 Tradd Street. Eliza Lee used this Tradd Street building to host society meetings—for example, the Society of the Cincinnati used this space as their clubhouse in the 1830s, as did the Charleston Hussars. She also took in boarders and vended pastries, cakes, and savory pies to the public. By the late 1830s, John Lee had secured a contract to provision the Citizens Guard from the Charleston municipal government. In the 1840s, his skills as a businessman and events manager led him to undertake running hotels. Over the next decade, while Eliza Lee prepared the meals, John Lee would manage events at four hotels: The Mansion House on Broad Street (1840-45), the Lee House (1845-48), the Jones Hotel (1848-1850), and the Moultrie House on Sullivan’s Island (1850-51). After John Lee’s death in 1851, Eliza returned to her property at 78 Tradd Street and continued her work as a culinary instructor until her own death in 1874.

Throughout the careers of John and Eliza Lee, Charleston cuisine primarily conformed to a high style of banquet and hotel cookery found in most major European and American cities. Even when using local Lowcountry ingredients, cooks were trained to roast meats and prepare puddings in the English style, and prepare broths, soups, and cook vegetables in the French manner. African-based cooking styles and seasonings entered into the cooking styles of this time period through the preparation of rice and fried dishes, particularly fish and frittered vegetables. Decades would pass before the dishes now known as Lowcountry cuisine, such as shrimp and grits and she-crab soup, appeared on the tables of elite households and restaurants. The staples of Lowcountry cuisine today reflect a dynamic hybrid of African, European, and even Native American cooking styles that developed over centuries.

"Still Life with a Bottle of Cognac, Crabs, and Prawns," painting by William Aiken Walker, 1860, courtesy of the Charleston Renaissance Gallery.