Enslaved Muslims in the Historical Record 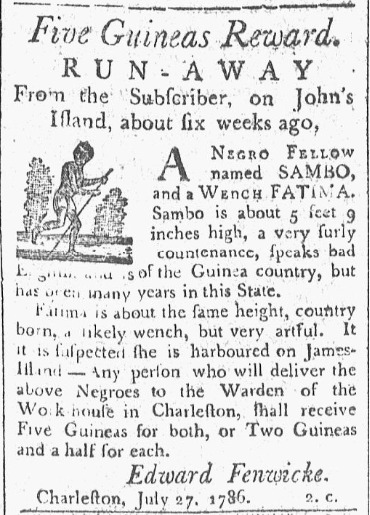 Muslims appear in the historic record in several ways. Some escaped or purchased their freedom, and their recorded experiences provide details about their time in colonial America and the United States as Muslims. Runaway slave ads (such as those collected in Runaway Slave Advertisements, volume III, which lists the runaway slave ads in South Carolina from 1730 to 1790) also reveal the presence of Muslims, with ad writers sometimes making the connection to runaways’ Islamic origins. For example, many ads and references to enslaved West Africans refer to them as “Mandingos.” While this word was originally used to denote people from a region, scholars explain that, by the nineteenth century, white people were using Mandingo as a synonym Muslim. In addition, individuals' names provide evidence of the presence of West African Muslims. Names in ads such as “Sambo” or “Moosa” have Islamic origins. The ads also note some runaways as Moorish (by which the white owners meant Muslim, rather than North African) or from the “Fullah nation” (referring to the Fula people), all indications that Islamic and Islamic-influenced people were commonly found in the South.

Decades after emancipation, the historical record continues to reveal the presence of Muslims in Lowcountry with the Works Progress Administration (WPA) Federal Writers’ Project. In the 1930s, federal employees interviewed former enslaved people and their descendants. In these interviews on Saint Simons and Sapelo Island, Georgia, those interviewed include memories of their family members’ Islamic practices. Taken alongside plantation journals and a manuscript written by an enslaved Muslim, their recollections help clarify that enslaved and then freed people of African descent did not necessarily categorize and distinguish between religions in tidy ways. Traditions emerged from a blending of cultural practices with the origins of those practices rather easily erased.

To better understand Muslims’ historical presence in the United States, historians examine these American sources, and they analyze them in the context of the history of West Africa. Their scholarship reveals that there were many different experiences among enslaved Muslims. Some were well known and conducted their Muslim practices openly. Other enslaved Muslims were private enough about their Muslim identity that the people around them did not know they were Muslim. On Lowcountry plantations, enslaved people’s religious practices often took place clandestinely, as they headed into the woods to practice in private. Privacy was sometimes necessary for enslaved people because they left work without permission to worship. With religious practice regularly occurring in private, slaveholders or even other enslaved people would not have necessarily known if a person or family were Muslim. 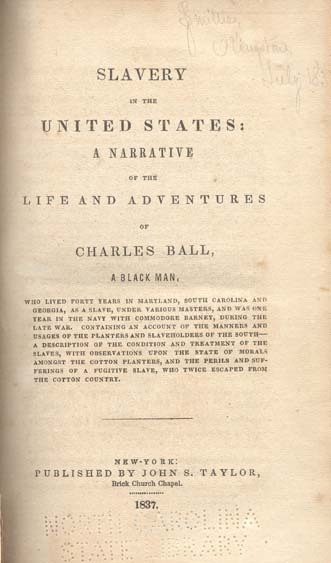 Charles Ball, who escaped slavery after spending some of his time in bondage in South Carolina, mentions Muslims in a slave memoir published in 1837. Not a Muslim himself, Ball writes, “I knew several who must have been, from what I have since learned, Mohammedans; though at that time, I had never heard of the religion of Mohammad.” One of the people Ball may have later realized was a practicing Muslim was his own grandfather. Ball witnessed his grandfather’s unfamiliar habits without knowing of the existence of Islam but describes them in a way that aligns closely with Islamic practice and belief. Only later does Ball learn of “the religion of Mohammad” and connect this new knowledge to his own memories. As indicated by Ball’s writing and Gomez’s analysis, even when enslaved people openly practiced Islamic traditions, it was not always recognized or recorded by the non-Muslim observers around them.

In some cases, African Muslims became Christians, though their motivations varied since some returned to Islam once out of bondage. While the historical record does not contain details of the specific conversion or religious practices of most West African Muslims who arrived in the Lowcountry, we can glean from the stories contained herein that they both resisted and adapted to their new environment. When they did retain Islamic practices as individuals, the passage of their religion on to their children could be thwarted by the dominance of Christianity and the ongoing threat of sale under American slavery, a common process that regularly separated enslaved families throughout the Lowcountry and the American South. Despite the many challenges of enslavement, though, generations of West African Muslims and their descendants continued to practice Islam or held on to parts of their religion, signaling not only the degree to which they valued their Islamic heritage but also their insistence on resisting enslavement.

← Religion and Enslavement in the Lowcountry
Five African Muslims: Their Experiences in the American South →