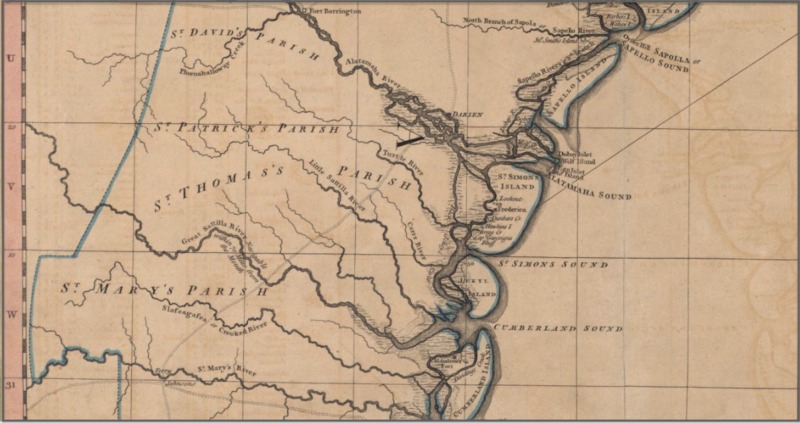 Portion of "A Map of South Carolina and Part of Georgia," William Faden, London, England, 1780, courtesy of the Library of Congress.

Salih Bilali and Bilali Mohammed were prominent enslaved West African Muslims whose well-known religious beliefs and spiritual practices left a lasting impact on the enslaved community, their descendants, and white plantation owners. While some Muslims in the United States did not feel safe expressing their Islamic faith, these two men found themselves in a place where they could more freely express their religious convictions.

Salih Bilali was born around 1790 in Massina along the Niger River, in present-day Mali. After being captured and sold along the Gold Coast into the trans-Atlantic slave trade, he was taken first to the Bahamas, enslaved by the British, then sold to James Hamilton Couper, an American plantation owner and slaveholder. Couper took Salih Bilali to Cannon’s Point plantation on St. Simons Island, Georgia where Couper quickly took note of the West African Muslim’s skills. Couper wrote of Salih Bilali, “his industry, intelligence, and honesty, soon brought him notice, and he was successively advanced, until he was made head driver.” Salih Bilali was noted in some sale records as “Tom.” While his prominence places him in several historical record locations, for many other enslaved Muslims, that single mention – in a bill of sale, runaway ad, or plantation journal – serves as the only evidence of their existence in America, creating historical erasures impossible to recover. However, Salih Bilali’s experiences were much more well recorded, and so he was known across St. Simons and beyond for his high-ranking status within the slave hierarchy and for his Muslim practices. 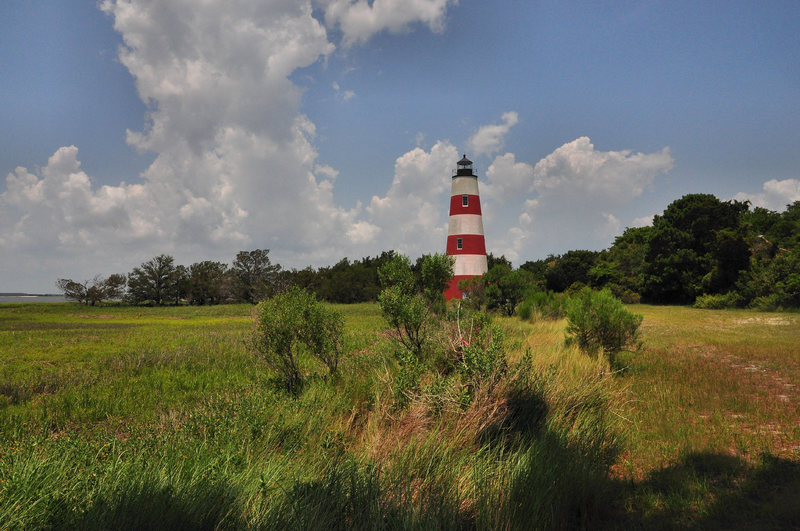 Sapelo Island Lighthouse, photographs by Brian Brown, Sapelo Georgia, 2013, courtesy of Vanishing Coastal Georgia. Originally build by enslaved laborers in the 1820s while Bilali Mohammed was on the island, the Sapelo Island lighthouse was restored in 1998.

Along Georgia’s coastal islands, Sahil Bilali was not alone as a prominent enslaved Muslim. His friend, Bilali Mohammed, resided one island north on Sapelo Island. Like Salih Bilali, Bilali Mohammad was the slave driver on the plantation where he was enslaved, which was owned by Thomas Spaulding. Spaulding owned part of Sapelo Island starting in 1802, going on to own the island in its entirety by the 1840s. There, Bilali Mohammed was made head driver of over four hundred enslaved people.

On the Lowcountry’s sea islands, the labor system, and therefore the role of a slave driver, differed from that of the rest of the slave-owning United States. While plantations throughout the United States used the gang labor system, the Sea Islands used the task system. In this region, under the task system and on these remote islands, it was not uncommon for plantation owners to leave the islands for a period of weeks or months in the summer, leaving the head driver responsible for labor management. In certain instances there was no supervision at all by whites, particularly in the hot, mosquito-ridden summer months. While not a common practice elsewhere in the American South, this was normal practice on the Sea Islands. It did, however, require the plantation owner to have a reasonable degree of trust in the head driver. Couper left his St. Simons plantation with Salih Bilali supervising, and Spaulding likely did the same on Sapelo Island with Bilali Mohammed. 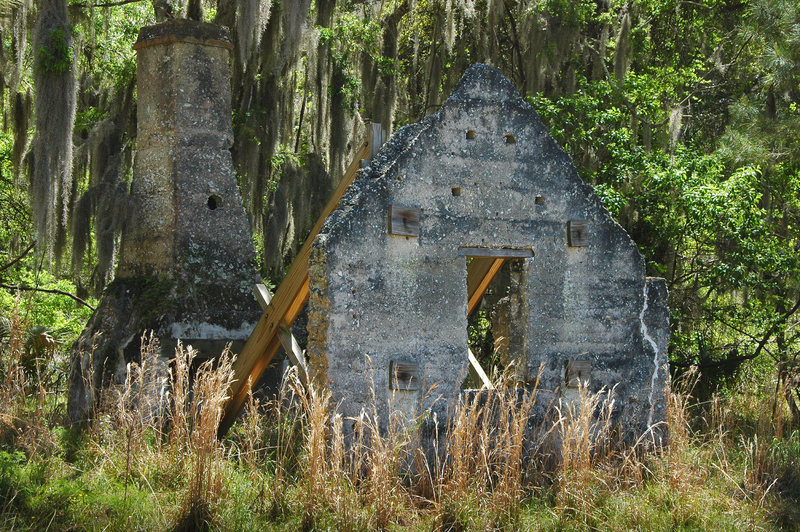 The events on the islands surrounding the War of 1812 proved that Spaulding undoubtedly had a high level of trust in Bilali Mohammed. Slave revolts such as the Stono Rebellion had left white Americans with a palpable fear of armed enslaved men. However, as an attack by the British seemed imminent on St. Simons in 1813, Spaulding armed over eighty of his enslaved men with muskets under Bilali Mohammed’s leadership. It is noteworthy that Spaulding not only provided the muskets but also that Bilali guaranteed that he and the other Muslims on the island would remain loyal to Spaulding. According to Spaulding, Bilali Mohammed guaranteed he would protect the island from the British but could not vouch for the loyalty of the so-called “Christian dogs,” referring to the non-Muslims enslaved. Bilali Mohammed’s loyalty, a quality that was highly valued among slaveholders, was recorded in Spaulding’s contemporaneous writing. But it is also reflected in the Couper family’s later writing. Years later, Couper’s grandson wrote that Muslims on the Sea Islands were “all loyal and devoted to their respective owners.”

The writings of Spaulding and then Couper’s grandson tell the story of two Muslim men through the eyes of white elites. Their certitude of “loyal and devoted” slaves speaks less to the intentions and thoughts of Salih Bilali and Bilali Mohammed, but is rather more reflective of paternalism’s role in shaping white Americans’ views and memories of American slavery. Salih Bilali and Bilali Mohammed may have used white slaveholders’ impressions of them to secure their own positions, or they may have had complicated relationships with Spaulding and Couper that included some degree of loyalty. Unfortunately, the only surviving records are from the perspective of the enslavers and their descendants. 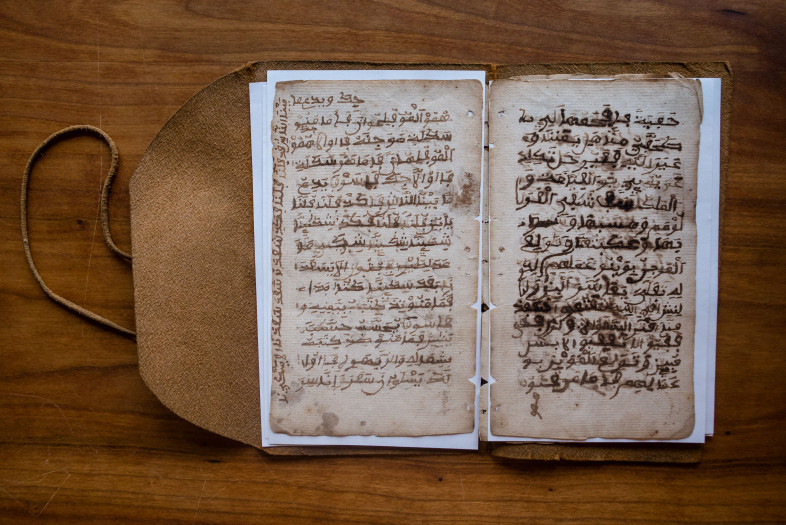 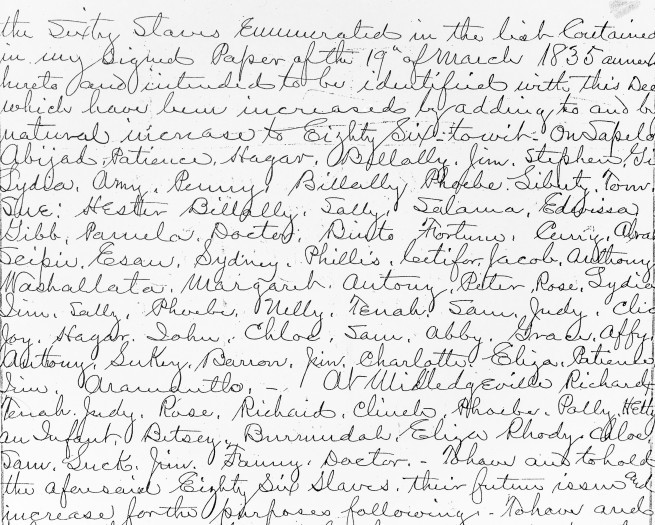 Portion of the land deed between Thomas Spaulding and Catherine Kenan, Sapelo Georgia, 1835, courtesy of the Georgia Historical Society. The deed listed the names of enslaved people, including members of the Bilali family, Hester and Phobe. Hester and Phobe's expressions of their Muslim practices are in the Muslim Culture on the Georgia Sea Islands page.

The relationships between both slaveholder and enslaved Muslim and between Sapelo Island’s Muslim and non-Muslim enslaved people provide insight into the nuanced landscape of hierarchy and differentiation. Couper, Spaulding, and other slaveholders’ choices to promote particular African slave drivers is evidence that some white Americans took note of (and used to their advantage) factors such as literacy, religion, and ethnicity. Meanwhile, Bilali Mohammed’s attitude towards other non-Muslim enslaved people is evidence that both ethnic and religious differences among enslaved people not only existed but, in some cases, divided them. While not all enslaved people focused on these differences, reflect enslaved people’s concepts of identity and loyalty that were present with them in West Africa. According to Spaulding, Bilali Mohammed expressed his difference in religious terms, but, just as importantly, he was also Fulbe, an ethnic group well known for its pride. His pride and self-assurance, which likely came from both his ethnic and his religious heritage, appear to be determining factors in his elevated status on St. Simons Island. On a different plantation, an enslaved West Africa’s pride may very well have led to social and cultural isolation among other enslaved or violence from a slaveholder. Taken alongside the experiences of other enslaved Muslims, it’s evident that circumstance played an important role in determining how an enslaved Muslim chose to assert themselves and express their religion.

The experiences, circumstances, and decisions of enslaved Muslims in America are a reminder that the enslaved experience was not a monolithic one.  In some cases, enslaved Muslims hid parts or all of their Islamic practices. On the remote sea islands of Georgia, though, Bilali Mohammed and Salih Bilali found their differences possible and profoundly important to maintain. Generations later, therefore, the two Muslim’s descendants remembered their Islamic heritage through memories of grandparents’ religious and cultural practices.