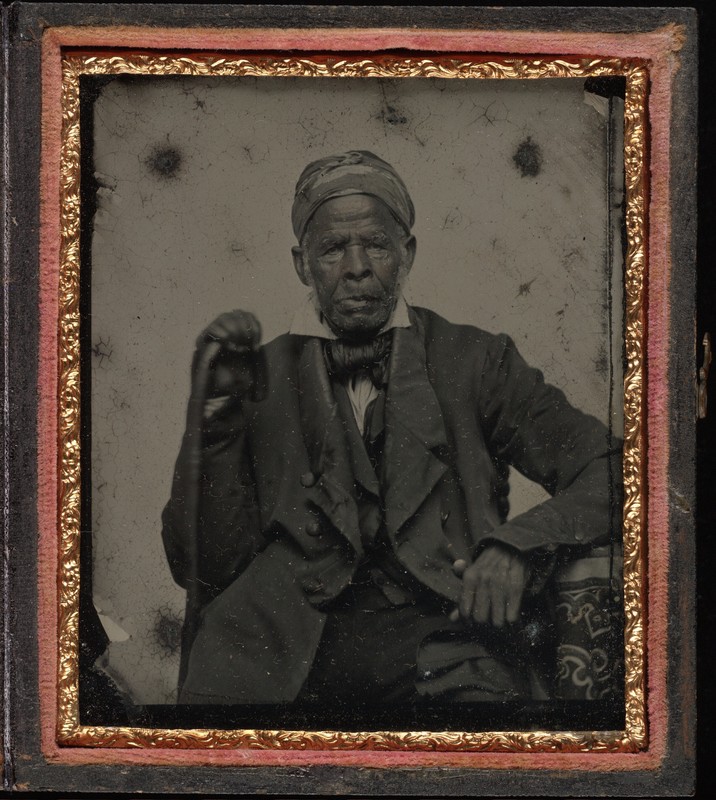 Omar Ibn Said of the Tukolor Fula people was born around 1765 in Futa Toro, present-day Senegal. Said was captured in his early thirties and sold into the trans-Atlantic slave trade around the age of thirty-seven. Scholars estimate that the slave ship that brought Said to Charleston, South Carolina landed in 1807. The next year, the United States abolished the trans-Atlantic slave trade making it illegal to bring new enslaved people to the United States (though the illegal slave trade continued).

While enslaved in America, Said wrote fourteen manuscripts in Arabic, one of which is the only know Arabic-language autobiography penned by an enslaved African in the United States. He recorded the details of his early life, his devotion to Islam, his capture and enslavement, and his relationship with Christianity in his autobiography, Life. Said’s literacy in Arabic garnered the attention of many, particularly after he escaped from an intensely violent slaveholder who had purchased him in South Carolina. Once escaped, Said fled South Carolina, landing in Fayetteville, North Carolina. There as a Muslim runaway, Said sought a place of worship, and so he found a church and began praying. When found in the church, local authorities took Said into custody as a runaway. Said garnered notoriety for writing on the walls of his jail cell in Arabic, which challenged whites’ prevailing beliefs that enslaved Africans were illiterate. 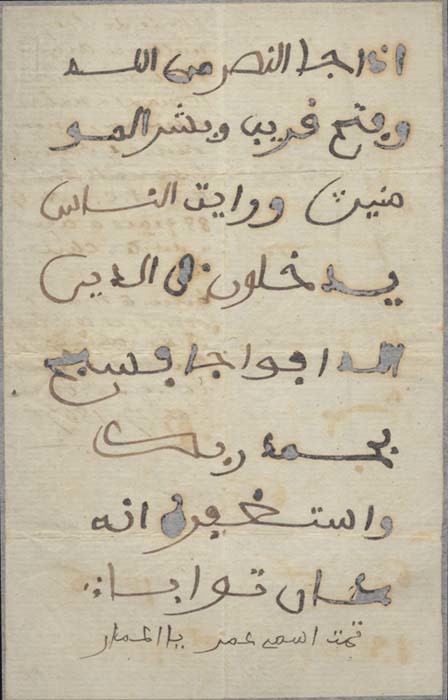 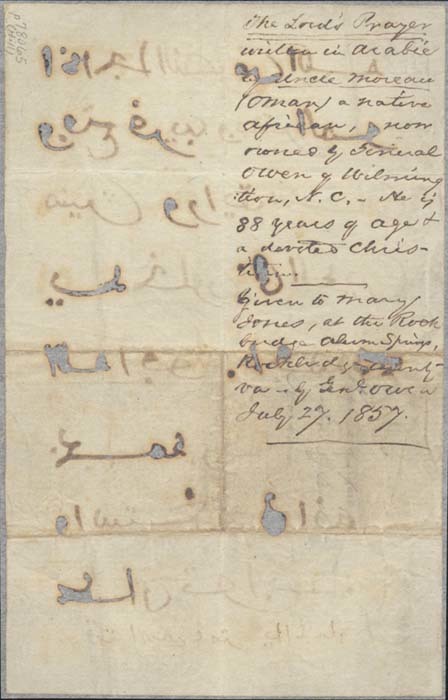 Said was eventually purchased by a prominent man in the area, General James Owen. Knowing of Said’s Islamic faith and Arabic literacy, Owen provided him with an Arabic copy of the Bible. Said attended the local Presbyterian Church and was baptized as a Christian in 1821. Many around Said commented on his full conversion and his solid Christian faith. However, inside of his Bible, Said inscribed in Arabic, “Praise be to Allah, or God” and “All good is from Allah.” Through his writings, Said proved to be cleverly clandestine about practicing Islam. For example, he penned the Fatiha, the opening chapter of the Qur’an, in Arabic allowing white observers to believe it was the Lord’s prayer. In another text, he wrote a part of a Psalm but then included a traditional Muslim invocation after it.

It was his Islamic educational training that allowed Said to use Arabic to hide his Muslim religious writings. While many whites expressed their praise of his conversion, one of his ministers showed some doubt of Said's full conversation writing that “by all outward signs” Said was a faithful Christian. In this way, Said’s Presbyterian minister left open the possibility that performance of religious faith and individual belief could be two separate operations for individuals such as Said. For Said, surreptitious subversions like his prayer writings suggest that a complicated spiritual world of syncretism and performance were at play. While Said understood that aspects of his cultural differences, such as his ability to write in Arabic, were interesting to the white people around him, he may not have felt safe or comfortable displaying his Islamic religious practices to those same people. Said’s writings as a whole are ambiguous concerning how he conceived of these two religions, but it is obvious that both religions, Islam and Christianity, were an important part of his life once enslaved in the United States.

In 1864, after more than fifty years in the United States and as the Civil War was coming to a close, Said died. Only a year after his death, slavery would be legally abolished in the United States. Unlike Suleiman Diallo and Rahman, Said was never granted freedom. Before and after his death, however, many people took note of Said, including religious leaders, abolitionists, and academics. Each group examined Said’s life through their own white ideological lens. Members of the American Colonization Society, for example, told of Said’s conversion to Christianity and spoke of him as a supporter of their cause to send enslaved Africans back to Africa. However, it is not clear to what degree Said really did support their organization. For himself, Said decided a return to West Africa was not suitable, citing his uncertainty that his family and his people were still intact. An academic, Theodore Dwight, the first secretary of the American Ethnological Society (an early scholarly institution focusing on the discipline of anthropology) knew of Said and other enslaved African Muslims. Dwight’s writing on enslaved Muslims provides evidence of surprise among white Americans at the degree to which West African Muslims were educated. Dwight’s writing also sheds light on Muslims’ commitment to the Islamic schooling they received in West Africa once America. In a January 1864 article in The Methodist Quarterly, Dwight penned:

It affords an idea of the degree of education among the Moslem blacks, when we see a man like this able to read and write a language so different from his own native tongue. Where is the youth, or even the adult, among the mass of our people who is able to do the same in Latin or Greek? 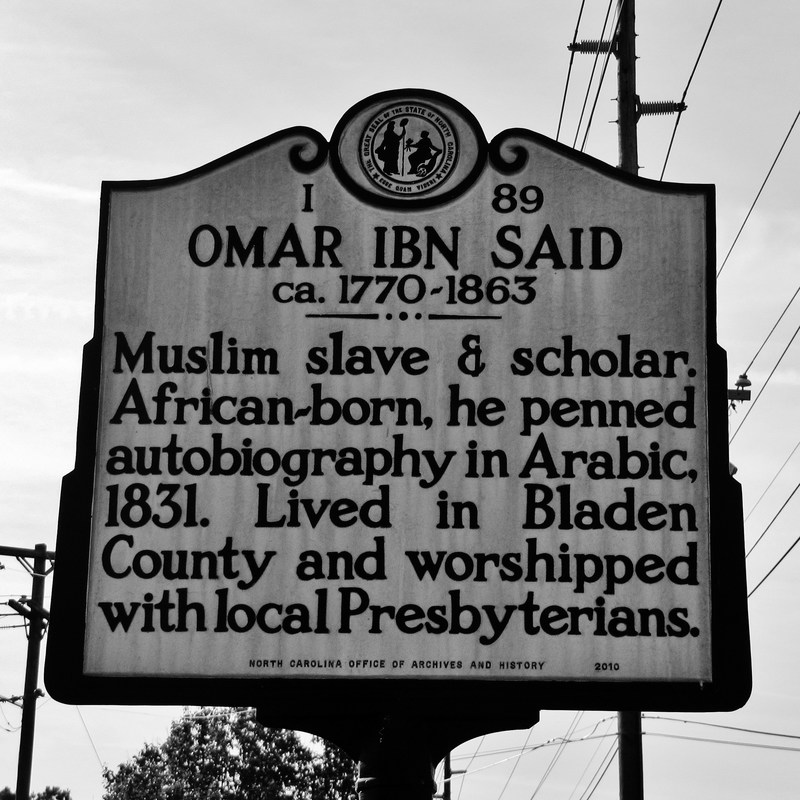 Said’s status and education in West Africa, as well as his tenacious resistance to his violent treatment in South Carolina, provided him with a skill set wherein he was able to garner positive attention from at least some white Americans. Both accounts of Said and his autobiography tell of white American’s positive reaction to his literacy and spiritual devotion, the latter with assumptions made to suit their own conception of the man. While the reaction of white people was fortunate for him, literacy among enslaved people was not legal in certain states, including South Carolina, the state from which he escaped enslavement. Said’s experiences also shed light on the complexity of some enslaved people’s relationship to multiple religions, in his case Islam and Christianity. Just as traditional West African religions were syncretizing among enslaved people on the islands of Georgia and South Carolina, it probable that some enslaved Muslim combined their practices with Christian ones. Alternatively, Muslims like Said may have understood that their internal religious beliefs were risky to proclaim, and their experiences and circumstances led them to grasp the social value of participating in Christian practices while more quietly holding on to their Islamic beliefs.