St. Patrick in stained glass window, image by Andreas F. Borchert, Church of Our Lady, Star of the Sea, and St. Patrick in Goleen, County Cork, Ireland, 2009. According to legend and some document evidence, St. Patrick was born in Roman Britain in the late 4th century, at a time when slavery was more prevalent in the region. When he was sixteen years old he was captured and sent to Ireland as a slave. He escaped back to England, but later became a cleric and returned to Ireland to spread Christianity. By the 7th century, he was the patron saint of Ireland.

Before New World expansion, concepts of race and racial hierarchies did not define who could and could not be enslaved in Western Europe. Instead, the spread of Christianity in the Early Middle Ages (from the fifth to tenth centuries) marked the boundaries of slavery throughout Europe. Historian David Brion Davis argues that the Judeo-Christian belief in a monotheistic God who rules over a homogenous group of people eventually served to prevent European Christians from enslaving one another. As more western Europeans converted to Christianity, this unified religious identity enabled the decline of slavery in Europe, but allowed other rigid social and labor hierarchies to remain. By 1500, European Christians believed slavery was a more devastating punishment than execution for criminals and prisoners of war. Still, European Christians did not object to the enslavement of non-Christians, particularly with ongoing conflicts between Christians and non-Christians within Europe, in the nearby Islamic World, and later in West and Central Africa (which also included Muslim regions) and the Americas.

In northwestern Europe, non-Christian (or pagan) Vikings regularly raided coastal towns for slaves from the fifth to the eleventh centuries. The Norman Conquest of England in 1066 helped protect some areas from these slave raids, but tensions and conflicts continued between Christian and non-Christian Europeans. Even after many Irish Celts converted to Christianity starting in the fifth century, English Christians deemed them inferior, based on the suspicion that their religious practices still contained non-Christian rituals. This sense of Christian superiority helped the English justify Irish colonization in the centuries to come.

The Christian Crusades of the High and Late Middle Ages waged against Islamic kingdoms in the eastern Mediterranean, western Asia, and northern Africa, also helped form a division between Christians and Muslims. The expansion of Islam in the fifteenth century through the Ottoman Empire (which encompassed parts of southeastern Europe, North Africa, Western Asia, and the Middle East by the sixteenth century) further fueled religious conflicts before the trans-Atlantic trade. In addition, from the fifteenth to the nineteenth centuries, Barbary corsairs (or pirates) raided European coastal towns and enslaved European Christians for Islamic slave trade markets. Ultimately, even with the protection of church law, European Christians were familiar with the threat of enslavement. 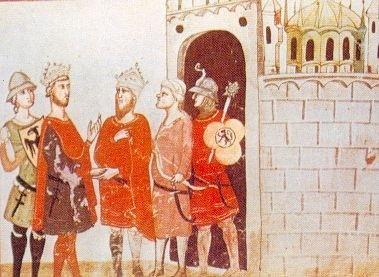 Emperor Frederick II, a Christian crusader from Italy, meets al-Kamil, Muslim ruler of Egypt, during the Sixth Crusade (1228-29), from a manuscript of the Nuova Cronica by Giovanni Villani, ca. 1341-48.

In response to these conflicts, a series of fifteenth century popes argued for the enslavement of non-Christians as "an instrument for Christian conversion." According to church law, Christians were protected from slavery, but Muslim "infidels" and non-Christian "pagans" were acceptable to enslave. Similarly, in Islamic law, only non-Muslims could be enslaved. While Jewish populations living in Christian-dominated Western Europe were protected from slavery in the Middle Ages, widespread anti-Semitic prejudices amongst European Christians led to Jewish persecution, exile, violent massacres, and even accusations of causing the Black Death.

In the New World, the criteria for enslavement increasingly shifted from non-Christian to non-European. As Europeans began emphasizing religious, racial, and ethnic differences between themselves and American Indians and Africans, this boundary moved further, from non-European to non-"white," particularly to enable the enslavement of "black" Africans and their African American descendants. 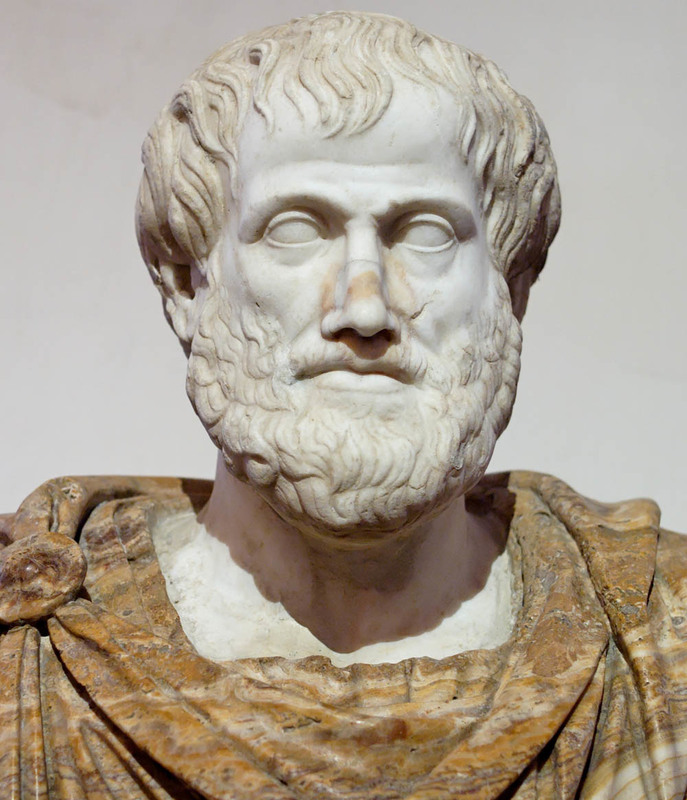 Aristotle, marble bust is a Roman copy after a Greek bronze original by Lysippos from 330 B.C., courtesy of the National Museum of Rome. Aristotle produced writings about slavery and "natural" social hierarchies that influenced prominent Christian theologians such as Thomas Aquinas in the thirteenth century. Later theologians used Aristotle's argument for "natural slaves" to justify New World slavery.

The recovery of classical Greek texts before and during the European Renaissance also provided philosophical and theological justification for a Christian social hierarchy that included slavery. For example, the Greek philosopher Aristotle (384 BC to 322 BC) produced writings about slavery that influenced prominent Christian theologians such as Thomas Aquinas in the thirteenth century, and later provided legal and moral justifications for implementing slavery based on a racial hierarchy in the sixteenth century. Aristotle argued that the master and slave relationship was natural and that some are marked out for subjection, others for rule. Aquinas built on Aristotle’s argument to assert that the slave was the physical instrument of his owner. This condition allowed a slave owner to claim everything his or her slaves possessed and produced, including their children. Aquinas attributed the plight of enslavement to sin and the inevitable conditions of a sinful world. Other theologians before and during the Renaissance emphasized Aristotle's belief in a natural order, but asserted that some men were slaves by their very nature.

Based on this evolving theology, European Christians initially saw non-Christians as "natural slaves." With New World expansion, however, Europeans came to primarily associate Africans with the institution of slavery. To explain this racial shift from a Judeo-Christian worldview, sixteenth and seventeenth century theologians merged Aristotle's theory of “natural slaves" with the biblical Curse of Ham. According to this interpretation, Africans are the descendants of Ham and Canaan, who Noah cursed into slavery for Ham's transgressions (Ham is Noah's son and Canaan's father). Though the Bible does not mention race or skin color in this narrative, according to these sixteenth and seventeenth century theologians, Africans inherited Ham and Canaan's curse of slavery. By the nineteenth century, pro-slavery advocates in the United States continued to use this misleading biblical justification, as well as Aristotle's theory of natural order and New World racial prejudices, to defend their support of slavery. 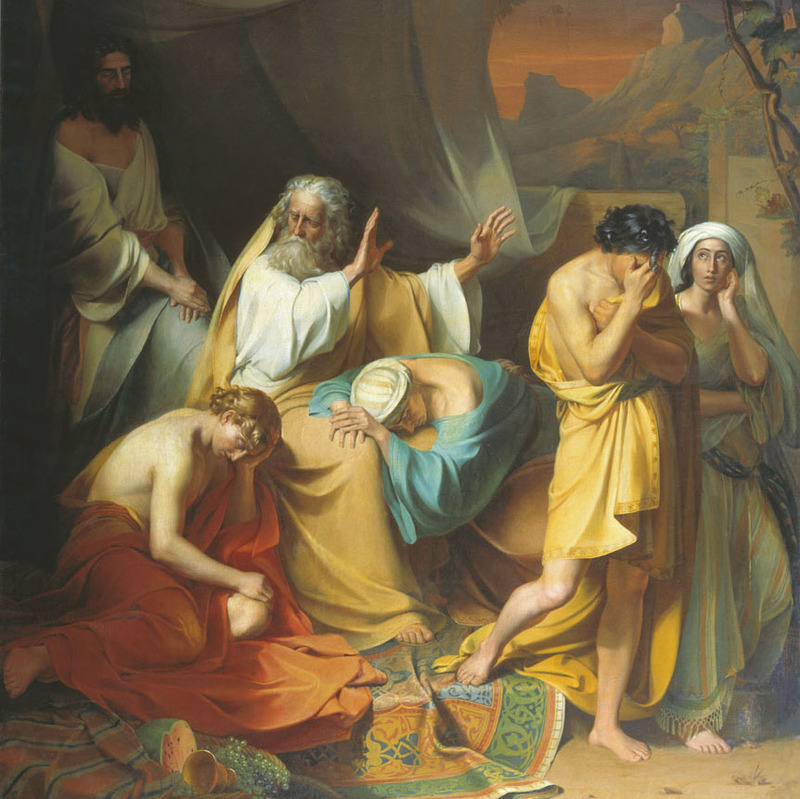 Noah damning Ham, painting by Ivan Stepanovitch Ksenofontov, ca. 1817-1875, courtesy of the State Buryat Republic Art Museum, Ulan-Ude. Sixteenth and seventeenth-century theologians wrote that enslavement of African peoples was justified based on the belief that Africans were descendants of Ham, a biblical figure cast into slavery by his father, Noah.

← Slavery before the Trans-Atlantic Trade
Freedom, Slavery, and Race in the New World →