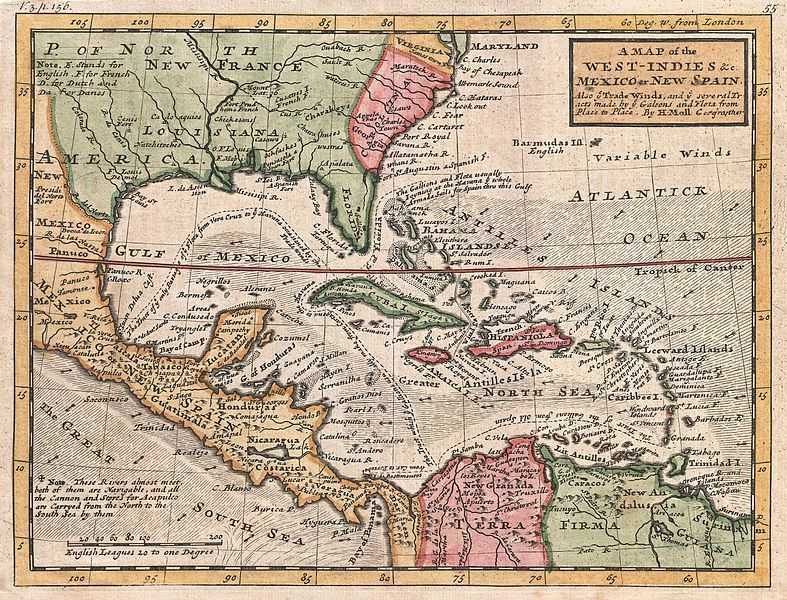 Map of West Indies and Caribbean, created by Herman Moll, 1732, courtesy of Geographicus Rare Antique Maps. Map reveals relatively close proximity of Carolina colony and British West Indies. Early settlement in Carolina was strongly influenced by trade with Barbadians and other West Indian settlers, as well as emigration from the West Indies of both planters and slaves to this new North American colony. 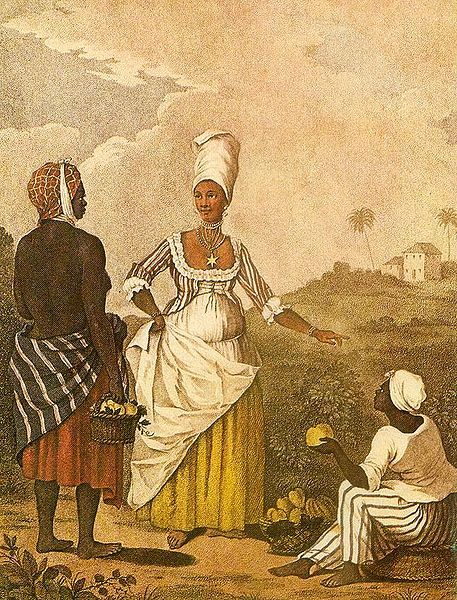 "The Barbadoes Mulatto Girl," painting by Augostino Brunias, ca. 1764, courtesy of the Barbados Museum & Historical Society. This painting depicts the presence of enslaved Africans and African European "mulattos" in Barbados, as well as a sugarcane plantation in the background. Barbadian settlers brought the plantation model to the Carolina colony, and reliance on African enslaved labor.

The development of a plantation economy and African slavery in Carolina began before English colonists even settled Charles Town in 1670. In 1663, eight Lords Proprietors in England received land grants in North America from King Charles II for their loyalty to the monarchy during the English Civil War. The Lords decided to combine their shares to establish a profit-seeking proprietary settlement, Carolina, between the English colony of Virginia and Spanish Florida. To ensure financial success, they sent representatives to study the lucrative sugar plantation system on the Caribbean island of Barbados. They also recruited white settlers from this English West Indian colony to help launch their new North American settlement. These white Barbadians often brought enslaved Africans and African Barbadians with them.

Sugarcane never became a major cash crop in Carolina, but these Barbadians eventually transplanted their West Indian model of plantations and slavery to the new colony. Initially, Lowcountry planters attempted and failed to develop a cash crop from olives, grapes, mulberry trees, and different English-based grains. Carolina settlers also engaged in the fur trade with American Indians, extracted tar and pitch for naval stores, and raised livestock for exporting packed beef to the English West Indies. By 1690, however, Lowcountry planters had successfully applied the West Indian plantation model to rice, and Carolina rapidly developed into a lucrative plantation economy and slave society. 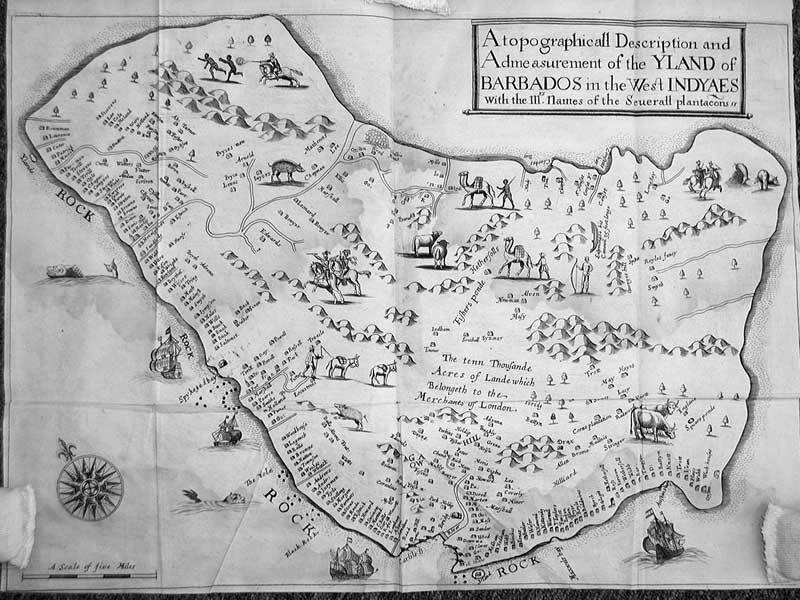 Map of Barbados, by Richard Ligon, ca. 1647-50, courtesy of the Latin American Library, Tulane University. Ligon, who lived in Barbados between 1647 and 1650, wrote about the enslaved society that contributed a significant number of the first permanent African descended settlers in Carolina. Large sugar estates identified on Ligon's map occupied the best land on the island, displacing many small farmers. By the mid seventeenth century, an enslaved black majority grouped together on large plantations was a constant source of anxiety to the declining white population. Ligon may have been thinking of a failed slave revolt that took place in Barbados in the 1640s when he included the drawing of runaways being pursued by the militia on the map. The militia were responsible for controlling the slave population and defending white English rule on the island. 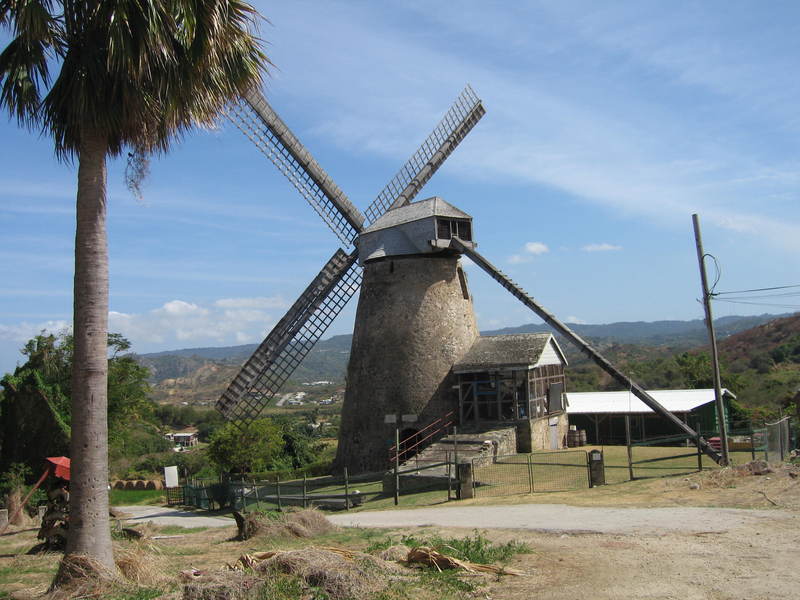 An overview of the early colonial history of Barbados provides context for why this English West Indian colony was so influential in the development of plantation economies in the Lowcountry and throughout the English North America. In the late seventeenth and eighteenth centuries, Barbados was an ideal place to recruit settlers who could promote the Lords Proprietors commercial interests in Carolina. By the 1660s and 70s, this relatively small Caribbean island featured the most lucrative trading system in the English colonies, and the most profitable sugar plantation system in the world. Barbados’ booming plantation economy had developed in just a few short decades, due to a series of geographic and historic advantages.

After the English settled Barbados in 1627, they quickly began cultivating different crops to find a lucrative export. As a coral island, much of the land in Barbados is flat or sloped and arable, in contrast to more mountainous volcanic islands elsewhere in the Caribbean. In addition, in the early seventeenth century, the island was reportedly uninhabited. Though Amerindian groups had a long history of occupying Barbados, conflicts between these groups and prior encounters with Spanish explorers (and European diseases) had nearly wiped out their numbers before the English arrived. In contrast, other English colonies in the Caribbean, such as Antigua and St. Kitts, continually struggled with attacks from Amerindian inhabitants, which delayed settler attempts to develop plantation economies. Geographically set apart at the eastern extremity of the Caribbean island chain, English settlers in Barbados could avoid conflicts with both European rivals and Amerindians and quickly develop cultivation and trade systems. 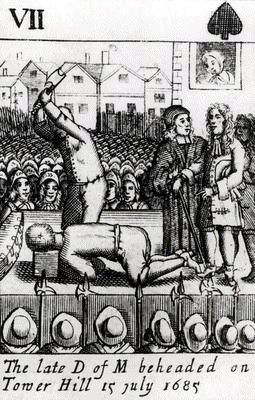 Execution of James Scott, Duke of Monmouth, July 15, 1685. In 1685, Monmouth attempted to overthrow King James II. He was executed for his actions, and over eight hundred of his supporters from England, Ireland, and Scotland were punished by being transported to work on sugar plantations in the English West Indies, including Barbados.

When English settlers arrived in Barbados they brought enslaved Africans captured from European rivals in privateering skirmishes. Dutch traders also brought enslaved Amerindians from British Guiana in South America. In the first few decades of settlement, however, the Barbadian labor force primarily consisted of white indentured servants, convicts, and “barbadosed” or kidnapped workers from Scotland, Ireland, and England. Barbadian settlers used this mixed labor force to cultivate cash crops such as tobacco, cotton, and indigo on small to medium-sized landholdings, but they struggled to find a successful export. In addition, labor conditions were extreme and oppressive, and indentured servants protested their treatment on the island through riots in 1634 and 1649.

The colony of Barbados continued to struggle financially until the 1640s, when the Portuguese expelled Dutch traders and Sephardic Jews from northern Brazil during a civil war. These settlers turned to English West Indian colonies for new trade markets. They particularly looked to Barbados to cultivate sugar for the booming European market, and to encourage a consumer base for their connections to the trans-Atlantic slave trade in West and Central Africa. As the easternmost Caribbean island in the Lesser Antilles, Barbados was ideally situated to become a port for European trade, and an entryway into American trade systems. European sugar consumption also grew tremendously in the eighteenth century. New Barbadian sugar planters as well as traders became immensely wealthy. The Sugar Revolution transformed Barbados from a colony of small landholdings to an entirely deforested island, covered in plantations worked by enslaved Africans and owned by a handful of elites. 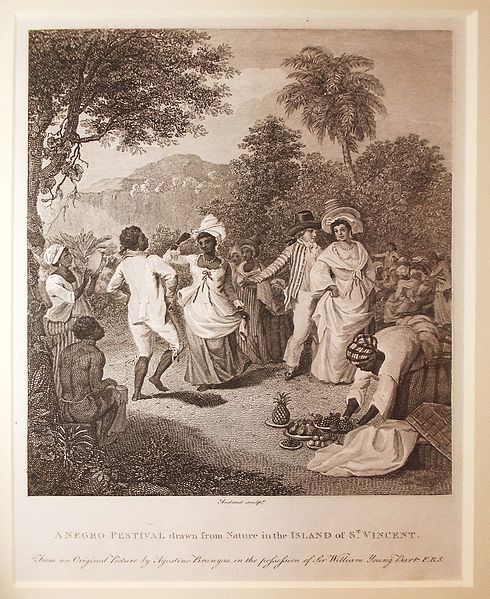 "A Negro Festival drawn from Nature in the Island of St Vincent," engraving by Audinet, 1801, courtesy of the National Maritime Museum, Greenwich, UK. In the seventeenth and eighteenth centuries, enslaved Africans in Barbados sometimes escaped by boat to nearby islands such as St. Vincent. On this mountainous island, Amerindian Kalinagos allowed Africans to become a part of their social structure and intermarry after 1660, when Kalinago relations soured with European allies. Many of St. Vincent's current inhabitants are descendants of these escaped Africans and Amerindians.

Initially, white indentured servants remained a large part of the sugar plantation labor force, but as contract prices rose, planters sought to limit their costs by exploiting permanently enslaved Africans from the trans-Atlantic slave trade. Moreover, once white servants completed their indenture (if they survived the extreme disease and labor conditions), they also hoped to obtain land. On a relatively small island dominated by large plantations, additional acreage in Barbados became increasingly difficult to obtain. To become landholders, free white Barbadians had to emigrate to larger English West Indian islands such as Jamaica, or to North American colonies such as Virginia and Carolina. Small landholders felt pressure to sell their land to large landholders and move, and the younger sons of elite planter families with no land inheritance had to seek their fortunes elsewhere. For these reasons, many white settlers moved from Barbados to populate other English colonies in the New World. When they moved, these migrants sometimes brought enslaved Africans with them. Meanwhile, Barbadian planters acquired more enslaved Africans, and by the 1670s, when the Carolina colony was first being settled, Barbados had a black population majority.

Like enslaved Africans throughout the New World, growing numbers of Africans in Barbados consistently resisted their status and labor treatment, sometimes in collaboration with white indentured servants, by forming rebellions, stalling work, and running away. Though forested gullies on the island could provide some refuge for runaways, Barbados did not have mountainous regions to sustain significant maroon communities like Jamaica. Instead, enslaved Barbadians sometimes escaped by boat to other islands, such as St. Vincent. In contrast to white indentured servants, enslaved Africans in Barbados could not legally emigrate or claim land, but many were forced to migrate with white planters, or sold to other English colonies, including Carolina. These enslaved Barbadians brought experience with plantation agriculture as well as strategies for how to resist New World slavery. They also brought diverse multicultural influences drawn from African and Caribbean contexts.

← Rice in the Lowcountry
Barbadians in Carolina →