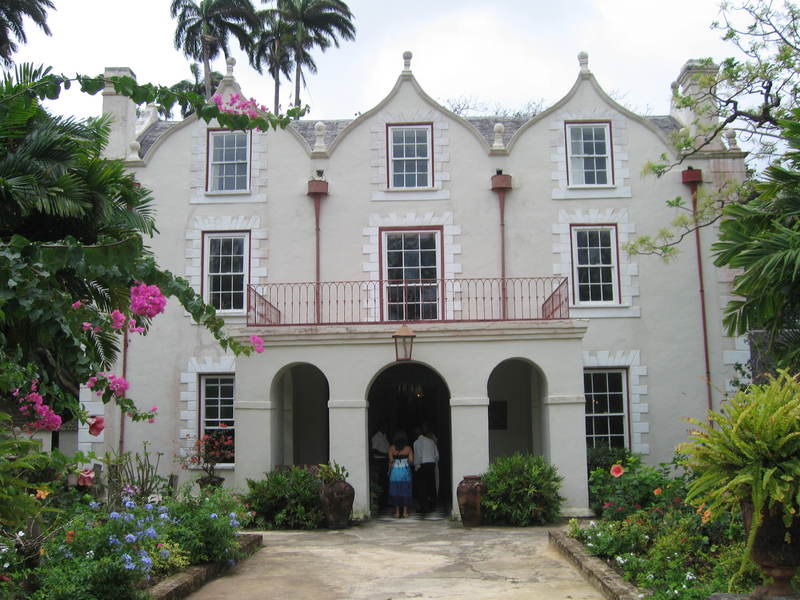 St. Nicholas Abbey, photograph by Mary Battle, Barbados, 2012. Sir John Yeamans was the former occupant of this plantation site in the seventeenth century, before he emigrated to Carolina and briefly became one of the first governors of the new colony. He was also a prominent member of the Goose Creek Men, an anti-regulatory faction in Carolina. 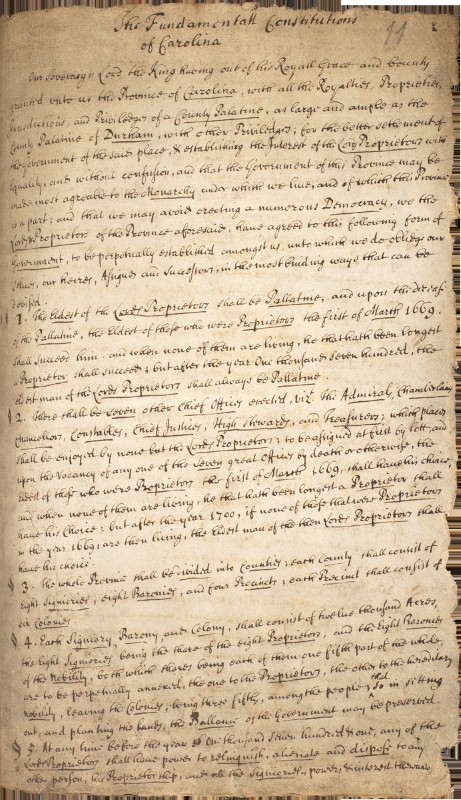 The Fundamental Constitutions of Carolina, drafted by the Lords Proprietors, 1669-1670. The original authors were most likely Anthony Ashley Cooper, the Earl of Shaftesbury, and the philosopher John Locke. This legal document encrouaged African slavery in Carolina by ensuring that every freeman had "absolute" power over his "Negro slaves."

Soon after the original eight Lords Proprietors (one of whom, John Colleton, was a Barbadian) obtained charters for Carolina in 1663 and 1665, a group of Barbadians led by John Yeamans attempted to establish a settlement on the Cape Fear River (now North Carolina). This settlement did not last, but Yeamans later became one of the first governors of Carolina from 1672 to 1674. Even before Charles Town (the first successful English Carolina settlement) was founded in 1670, the Lords drafted a Fundamental Constitution of Carolina in 1669 that encouraged African slavery based on the West Indian model. This Constitution granted every freeman "absolute Power and Authority over his Negro slaves," which assured West Indian planters they could continue using enslaved African labor when they immigrated to Carolina to establish plantations. The Lords Proprietors also offered prospective Carolina settlers twenty acres of land during the first year of settlement for every black male they owned, and ten acres for every black female.

Various white Barbadians who had been small to medium sized landholders on the island immigrated to Carolina in the first decades of settlement. Many families who became prominent planters and slaveholders in Charleston — including the Middleton, Drayton, and Gibbes families — have Barbadian origins. These Anglo Barbadian settlers brought colonial experience, the parish system, the Anglican Church, and plantation slavery to Carolina. In the seventeenth century, Barbados and the West Indies were also Carolina's chief source of enslaved labor. One third to one half of Carolina's early enslaved laborers at this time migrated from the English West Indies, particularly Barbados, rather than directly from Africa. In exchange for enslaved Africans, sugar, and other commodities, Carolina settlers shipped lumber, pipe staves, pitch, tar, resin, beef, pork, corn, peas, and enslaved American Indians to Barbados and other West Indian colonies such as Jamaica. This trade connection launched Carolina's early economy before the growth of rice agriculture, and continued until the Revolutionary War severed U.S. ties with other English colonies. These early trade connections were so significant that historian Peter Wood described Carolina as a "colony of a colony” of Barbados.

Many black and white settlers only briefly spent time in Barbados before arriving in Carolina. Still, their experiences on this West Indian colony influenced Carolina’s commercial priorities and legal systems. In 1691, Carolina leaders established a slave code modeled almost verbatim after laws passed by the Barbadian assembly between 1661 and 1688. Though such laws in practice were often flexible or ignored in early colonial contexts, this code served to legally define enslaved Africans as chattel property in Carolina. They were the most draconian statutes for enforcing slavery in the North American colonies. Through ongoing trade relationships with the West Indies, white and black Carolinians also shared information and ideas, including news about slave rebellions that occurred on various Caribbean islands throughout the eighteenth century. For whites in Carolina, this further encouraged fears about maintaining the safety of whites in a black majority colony, and led to increasingly strict and violently enforced laws for Africans and African Americans in Carolina and beyond. For enslaved Africans in Carolina, news of rebellions and black resistance inspired hope for freedom, as well as concerns about white retaliation. 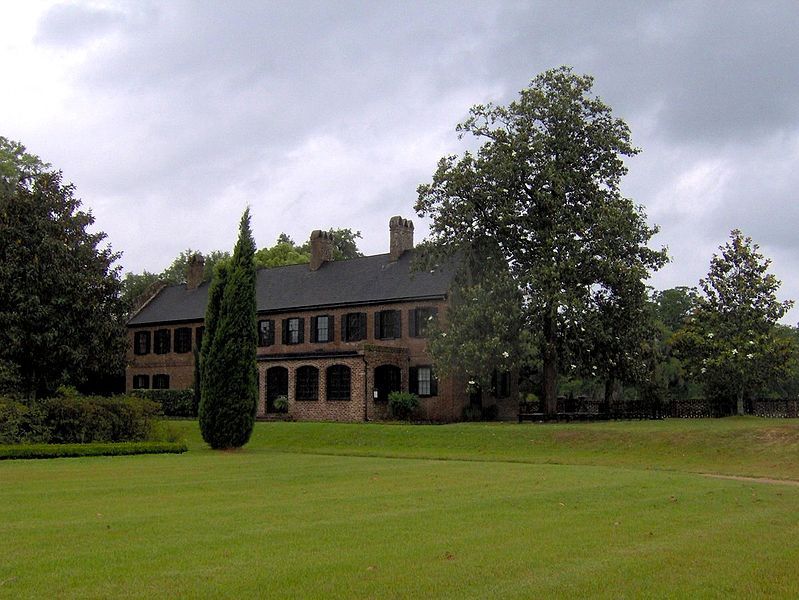 Ruins of plantation house at Middleton Place, Summerville, South Carolina, 2007. Arthur Middleton was a prominant member of the Goose Creek Men, along with Sir John Yeamans, Maurice Matthews, Robert Daniel, James Moore, and James Moore Jr. Middleton emigrated to Carolina directly from England, but he was influenced by the Barbadian planters who dominated this faction group. His descendants became wealthy planters, large slaveholders, and influential politicians in the Carolina colony and later state of South Carolina.

Though the Lords Proprietors actively sought white Barbadian settlers, they soon found that colonial experience could also make Barbadians independent and unruly in contrast to settlers that came directly from Europe. The Goose Creek Men formed an opposition faction in the early Carolina settlement against the Lords Proprietors, and many had Barbadian origins. Like many white settlers in Carolina, the Goose Creek Men sought economic advancement at all costs, and proved willing to trade with pirates and enslave American Indians to sell to the West Indies, despite regulations against these practices by the proprietary government in England. Throughout the 1680s, the Carolina colony was embroiled in factionalism encouraged by the Goose Creek Men.

To counterbalance this influential faction, and to increase the number of white settlers who could protect against slave rebellions and attacks from American Indians and Spanish rivals, the Lords Proprietors attempted to recruit more white settlers, including Huguenots, English Baptists, English and Scottish Presbyterians, and Quakers. They particularly offered lenient terms for religious freedom in the colony, which attracted Sephardic Jews to the Lowcountry as well as Protestant Christian Europeans (Catholics were prohibited until after the American Revolution). Despite their efforts, social and political turmoil continued in the Carolina colony. 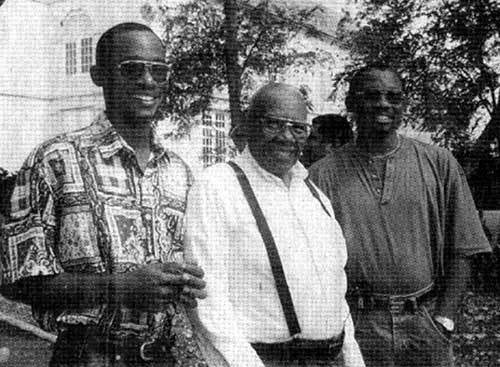 Bowens-Bowen Family Reunion at St. Lucy Parish Church, photograph, Barbados, 1996, courtesy of the Post and Courier and Drayton Hall. The descendants of enslaved Africans forced to migrate to Carolina from Barbados are powerful reminders of the historic ties between these former English colonies. In 1996, Richmond Bowens of Charleston (born at Drayton Hall), a descendant of enslaved African Barbadians in Carolina, traveled to Barbados to reestablish family links severed by slavery. Bowens (center) is shown here beside his Barbadian cousins, Julian and David Bowen. "Bowen" is spelled without an 's' in Barbados.