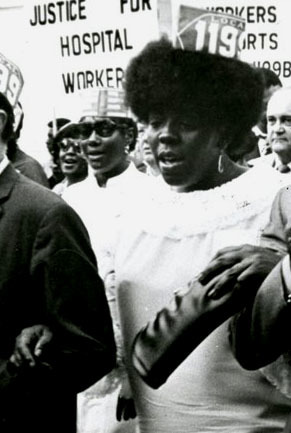 Charleston native Mary Moultrie (1943-2015) attended Burke High School. After graduation, she moved to New York City to work as a nurse’s aid at Goldwater Memorial Hospital for seven years. Following her licensure as a Practical Nurse, Moultrie returned to Charleston in 1967 to begin working at the Medical College Hospital of South Carolina. Moultrie was among the first employees to speak out against the unfair treatment of African American workers at the hospital. Her organizing efforts were key to the formation of a hospital employee union, which went on strike in the spring of 1969 to demand better pay and an end to racial discrimination. Two months into the strike, Moultrie spoke to a crowd gathered at Stoney Field Stadium in downtown Charleston to offer a message of perseverance and strength: “Unless you shape up, governor, our talking might just get a little bit louder. And our walking might just get a little bit longer.” Moultrie was elected the founding president of Local 1199B of the Hospital and Healthcare Workers’ Union.

In a 2009 interview, Moultrie discussed some of the the changes at the Hospital that came about as a result of the strike: “At one point, even in the cafeteria, the blacks and whites didn’t sit down and have lunch together, even if they worked in the same unit. When we got back to work that was different. If black and white staff was working together, and you were scheduled for work at the same time, then you’d go down and sit and eat together and talk. So there was a change.” Following a long career as the director of a Charleston neighborhood center, Moultrie helped organize Charleston sanitation workers for better wages and working conditions in the early 2000s. In 2011, the YWCA of Greater Charleston presented her with the Harvey Gantt Triumph Award for her strike leadership and her work in human rights.

Mary Moultrie speaks about her return to Charleston in 1967 after working at a hospital in New York and the beginning of her activism.

Mary Moultrie and Bill Saunders discuss segregation in hospitals, challenges during the strike, threats made against the demonstrators, and how women and children experienced the strike.