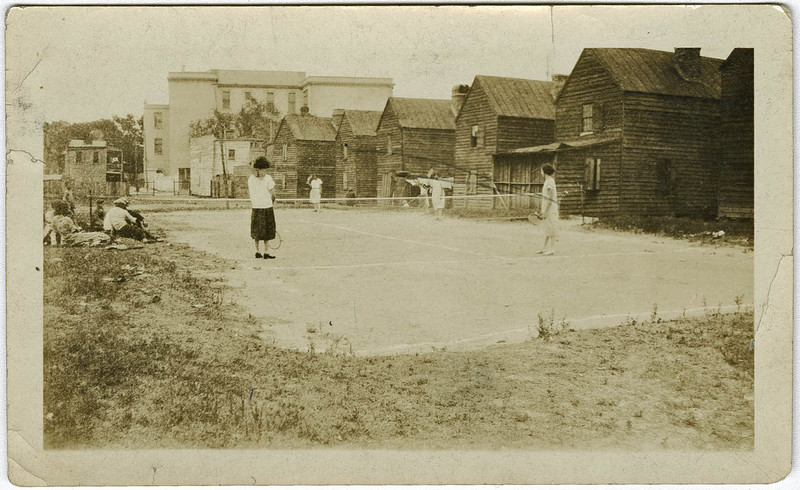 Avery students playing tennis on the court behind the Cannon Street YMCA, 1928, courtesy of Avery Research Center for African American History and Culture. The six wooden structures along the right are the dwellings that comprised Hertz Row (Hemlock Court). The four-story white building in the background is the Simonton School. All were demolished in second half of the twentieth century.

By the 1970s, civil rights activists and Black residents of the district’s neighborhoods saw desegregation progress in Charleston. Local activism and federal pressure on states to comply with the Civil Rights Act pushed desegregation forward in Charleston. Under the regime of segregation, Black communities were required to create their own separate facilities, stores, restaurants, and hotels to meet their needs. With desegregation, African Americans in Charleston, as in other places throughout the country, were able to attend schools, shop in stores, dine in restaurants, and stay in hotels that were once off-limits to them, and the battle for customers ensued. With more prominent sites, greater access to finance, well-established affiliations with brand-name products, ties to local government, and other unequal advantages, white businesses were often victorious. The duplication of services along with continued racism forced many African American business owners to close their doors, and the landscape of the once-thriving business district of Morris Street slowly became, in part, a memory. Albert Brooks—owner of Brooks Motel and Brooks Restaurant—noted that desegregation hurt his businesses, the last generation of businesses in the district. However, he also said that he “would not want to go back to the way it was before.” 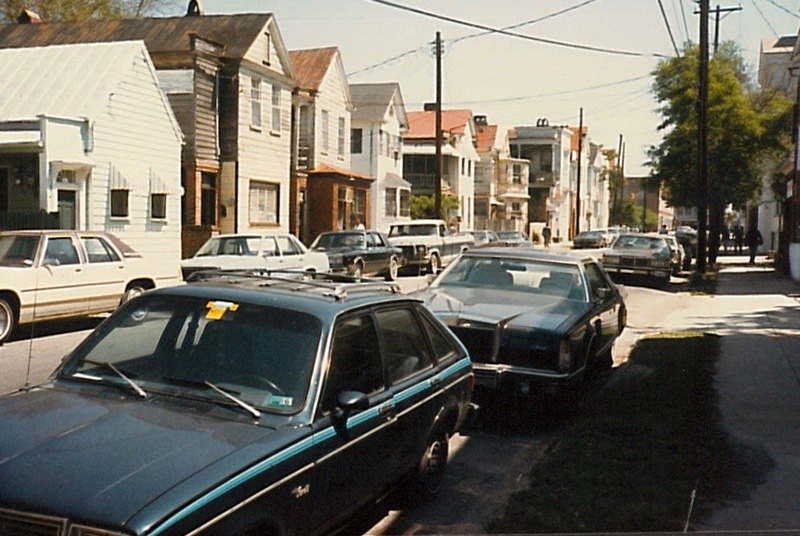 View of Morris Street, 1988, courtesy of City of Charleston.

The desegregation of many southern private and public spaces in the 1960s and 1970s marked a significant shift in the history of the Morris Street Business District. The once-thriving commercial thoroughfares like Morris, Cannon, Spring, and Line Streets slowly transformed into primarily residential blocks as the streets’ businesses competed with white-owned establishments on the much more prominent King, Meeting, Market and East Bay Streets. During these two decades, many Morris Street structures were demolished as part of an “urban renewal” or “slum clearance” movement that disproportionately affected Black neighborhoods and spread nationwide. Between 1957 and 1971, several tenements at the east end of Morris Street, near the intersection of King Street, were demolished for a parking lot, while nearly twenty postbellum tenements on Hertz Row (also known as Hemlock Court), which extended from the north side of Morris Street adjacent to DeReef Court, were also demolished. The lots remained empty until the 2010s when several large housing units were constructed. The 1865 Simonton School, originally known as the Morris Street School, was demolished as well, after having closed in 1973 due to the “deplorable condition” that the Charleston County School District claimed made renovation “unfeasible.” That property, too, remained empty for most of the late twentieth century, as well as the property at 179 Coming Street once occupied by Morrison’s gas station and dwelling, which was demolished in 1974 and remains vacant. 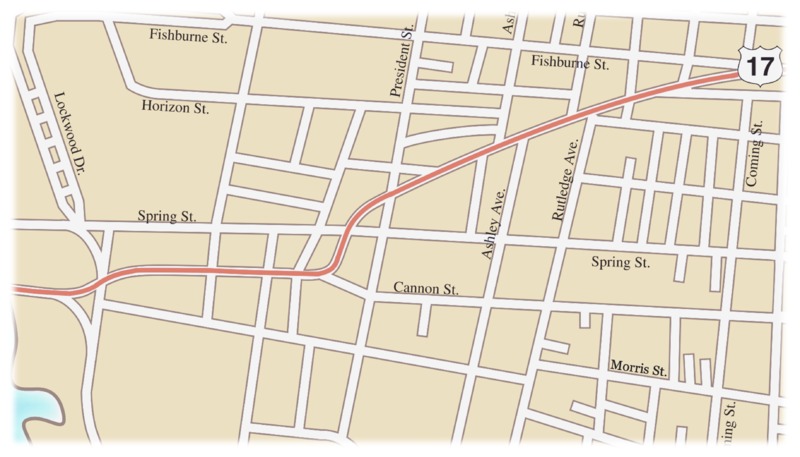 The Crosstown Expressway, now known as Septima P. Clark Expressway, was also a trigger for change. Constructed in the mid-1960s to accelerate suburban-oriented automobile through-traffic, it is an unusual and problematic piece of infrastructure, as a limited-access, high-speed freeway laid out on the same grade level as the surrounding streets. It violently bisected several neighborhoods, necessitating a large number of demolitions, and then poured noise and air pollution into nearby homes while also making pedestrian and bicycle traffic more inconvenient and dangerous. Many Black residents were displaced while others were forced to relocate in order to avoid the increased traffic to the once close-knit northern neighborhoods. The Crosstown, together with Charleston’s growing suburbs and urban renewal ventures, continued to contribute to the loss of Morris Street’s Black residents and led to an increase in abandoned houses in its surrounding neighborhoods in the 1970s and 1980s.

In 1974, Charleston conducted a city-wide historic resources survey that was prompted by the area’s increase in population and demand for new development. The survey intended to identify all historic buildings within the city limits in order to create a larger preservation plan limiting inappropriate land use, control large-scale development, and mitigate highway improvements. The survey documented the condition of Morris Street, reporting that 50-75% of the buildings on the north side of street at the west end and over 75% of the buildings on the south side between Coming and Smith were culturally valuable but had been made vulnerable by deterioration. As a result of the survey, the street came under the jurisdiction of the city’s Board of Architectural Review. 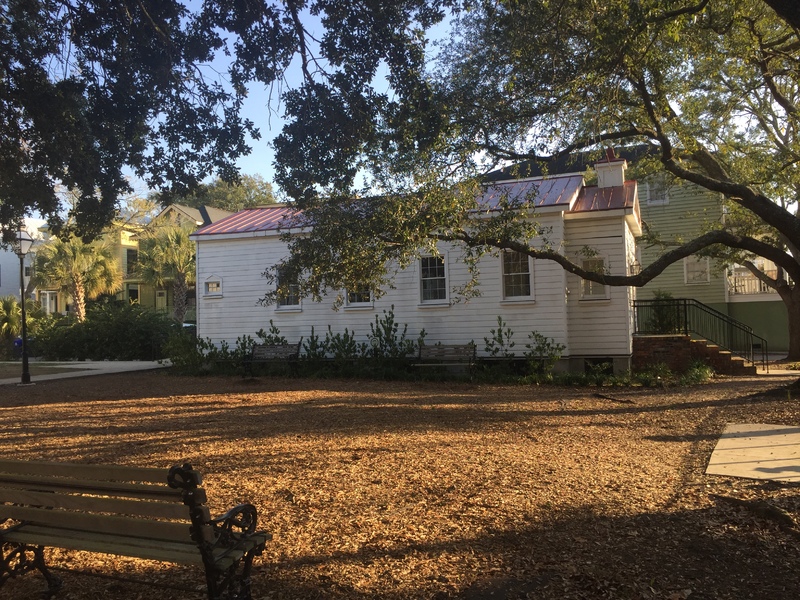 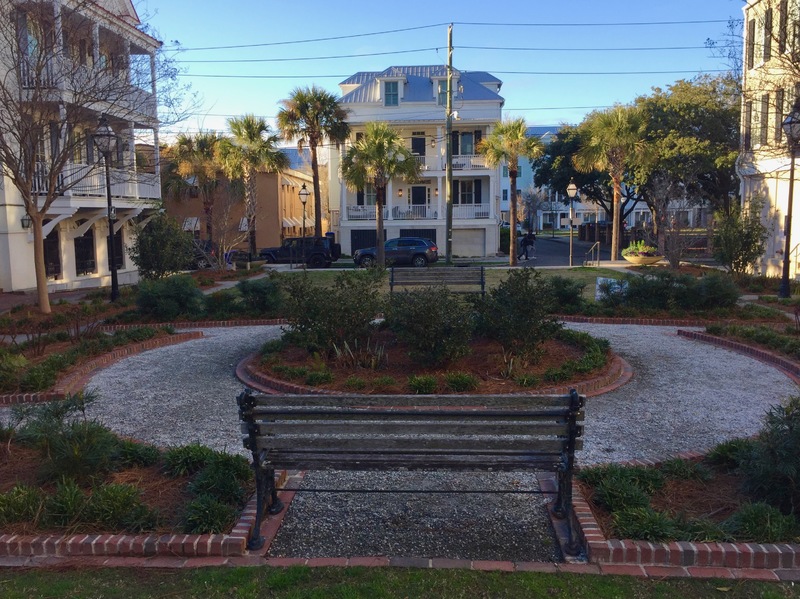 A decade later, the Geier-Brown-Renfrow survey in 1984 expanded on the 1970s historic inventory to include a more in-depth analysis of the historic buildings south of the Crosstown Expressway and recommended the area become part of Charleston’s historic district. All thirty-two Morris Street buildings identified as “historic” in the 1984 survey survive today; however, the survey did not record the Brooks Motel and other significant midcentury structures, which have since been lost. Following the publication of the survey and its recommendations, the Morris Street Baptist Church again became a headquarters for community activism, as residents from Radcliffeborough, Cannonborough and Elliotborough met with Mayor Joseph P. Riley to address concerns of potential gentrification that might result in the area’s inclusion in the local historic district overlay and Board of Architectural Review purview. At the meeting, Mayor Riley confirmed his intention to “not ‘gentrify’ the neighborhoods but to preserve them for the people” currently living there, and shortly thereafter the city established DeReef Park and Simonton Park to help foster the community.

Since then, however, Charleston’s residential market has slowly but consistently drawn an influx in multi-family residential development on and around Morris Street, and many Black residents have moved away. The midcentury civil rights landmark, the Brooks Motel, was demolished for new residential construction. DeReef Park has since become encapsulated with a large twenty-first century residential development called Morris Square, as has the Simonton Park on the former Simonton School lot. As new, mostly white homeowners moved in, the neighborhoods around Morris Street were described as having “‘close- knit’ community quality of multiple generations of native residents,” in the 2009 Cannonborough-Elliottborough Area Character Appraisal. Just a few years later, the Charleston City Paper described the neighborhoods around Morris Street as “a diverse, high-density residential neighborhood…home to corner stores, bakeries, yoga studios, hipsters, art galleries, older black families and religious institutions.” Residential properties on Morris Street purchased for $6,000 in the 1960s, however, were on the market for $500,000 by 2013. The Morris Street Business District’s 120-year history as a predominantly Black and immigrant neighborhood came to a close with the demographic changes in the early twenty-first century. The cost of entrance continues to increase.

Today, the street’s transition is ongoing. Many formerly dilapidated structures in the surrounding neighborhoods are being restored, rehabilitated and reopened as businesses, rental properties and single-family residences. Notably, the north side of Morris Street is included in the City’s Short Term Rental Overlay Zone, established in 2013 to allow short-term rentals as a conditional use for commercially zoned properties in the Cannonborough-Elliottborough neighborhood. As platforms like Airbnb have grown exponentially in recent years, the vacation rental industry has dramatically altered the character and demographic makeup of this part of the city. However, the six parking lots and seven empty lots along Morris Street are hollowed-out spaces in the landscape, reminders of houses and corner stores Black and immigrant families once called home. The formerly thriving business district that supplied residents with goods and services as well as fellowship and community has deteriorated to a partially preserved, residential neighborhood. The mixed-use ambiance of Morris Street’s neighborhoods is being gradually revived, but the historically Black and immigrant demographic makeup has been largely lost. 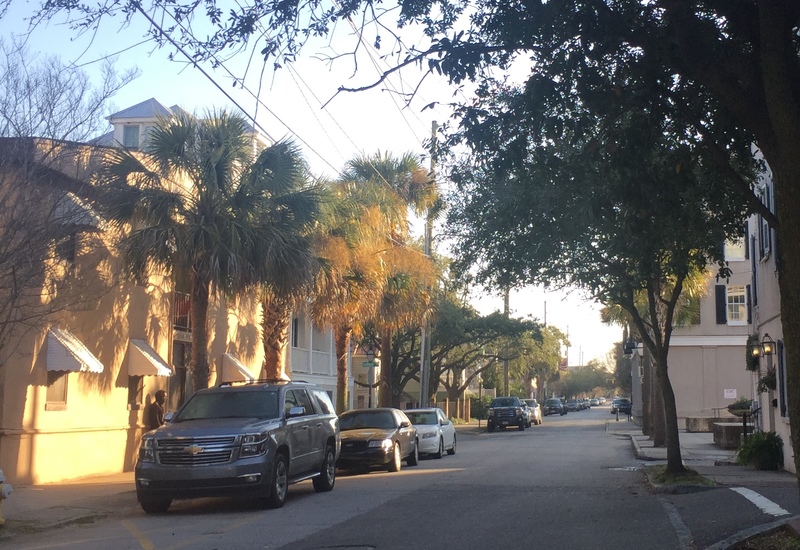 View of Morris Street from the west end looking east, photograph by LDHI, 2021.

Morris Street’s large number of surviving historic buildings, however, represent what remains of the cultural vibrancy and import of the community established in the 1850s. With Black churches historically serving as central meeting space for Charleston’s African Americans, it is not surprising that the Morris Brown AME Church remains a site of worship, community gathering, and even medical services. In the summer of 2015 when nine Black worshipers of Charleston’s Emanuel AME Church were murdered by a white supremacist, Morris Brown AME immediately became a place to gather and grieve. Church leaders organized a community vigil for the day after the massacre, and the packed church service overflowed with community members as hundreds more stood outside. 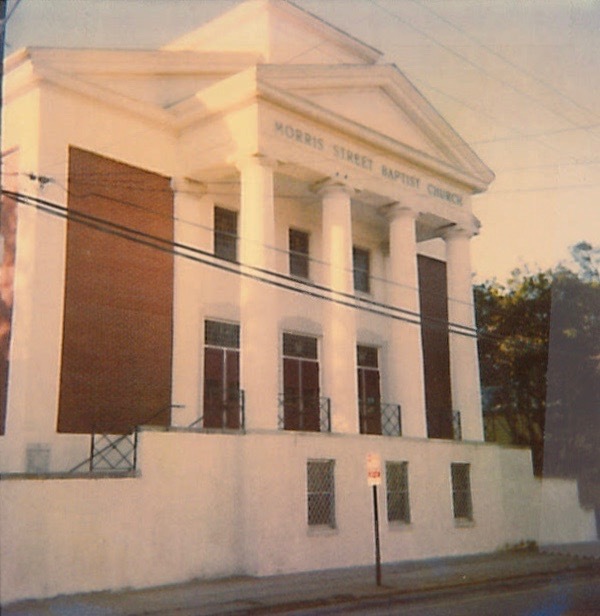 A few years later, when President Joe Biden came to South Carolina on the campaign trail during the primaries for the 2020 presidential election, he chose to attend Morris Brown AME’s service before holding a town hall. In 2020, the Medical University of South Carolina (MUSC), was responsible for organizing a regional response to the Covid-19 pandemic. MUSC partnered with the Morris Street Baptist Church to become one of the community sites where virus tests were conducted for the neighborhoods’ residents. These churches have been stalwarts of its 150-year-old neighborhoods. With the neighborhoods having changed so drastically in the last few decades, the churches also serve as a symbol of the history of self-reliant, hard-working Black residents of the business district.

The history of the Morris Street Business District also represents the social evolution of a single neighborhood during the most tumultuous transitional times in the history of the city, region, and nation. For over a century, the Morris Street Business District and its surrounding neighborhoods provided opportunity for people who struggled against disadvantage and prejudice—for immigrant families making their way in a new nation, and especially for Black families in their painful, powerful, and ongoing struggle to gain political, social, and economic equity.