The area known today as Morris Street underwent significant change in the eighteenth and nineteenth centuries. In the Colonial era, the land was a combination of farmland and marsh owned by the Elliott and Morris family. The elite English family owned the land from the early 1700s to the 1850s. Wealthy planter and slaveholder William Elliott, Sr. acquired the land before 1738 as part of an approximately sixteen-acre tract that was initially rented to individual tenant farmers. It was the American Revolutionary War that initiated the change that shifted the sparsely populated tract of land from farm to developing neighborhood, converting it from a rural to urban landscape. 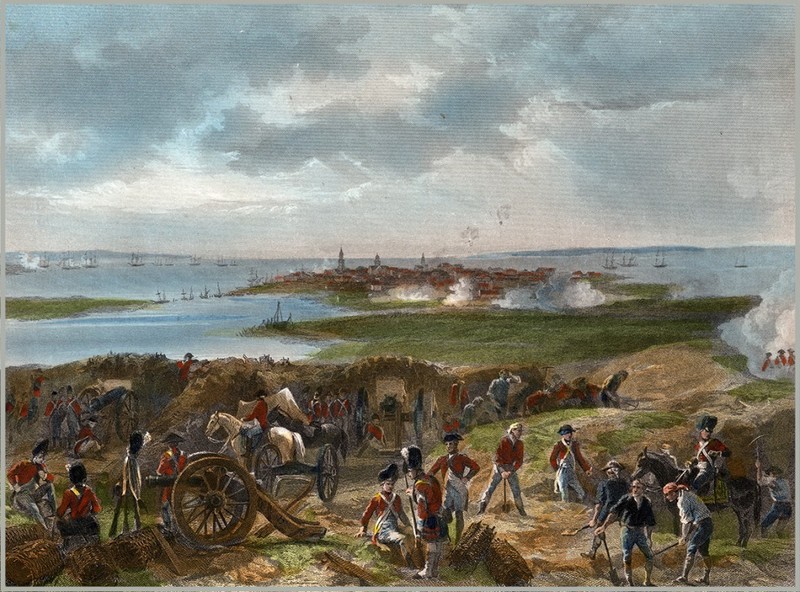 A Depiction of the Seige of Charleston of 1780, Alonzo Chappel, 1862, courtesy of Wikimedia Commons.

During the American Revolution, the tenant farmers most likely vacated the area. In 1780 the Continental Army’s Major General Benjamin Lincoln ordered “every house razed and every tree and every shrub chopped down” north of what is now Marion Square to create an unobstructed view of the Royal Army’s advancement toward the city. At their arrival, the Royal Army transformed the cleared farmland along both sides of King Street into strategic defensive trenches during what would be known as the Siege of Charleston. A defensive trench called the Second Parallel was created to extend from Cannon’s Creek to the Cooper River along the high ground of today’s east end of Morris Street. 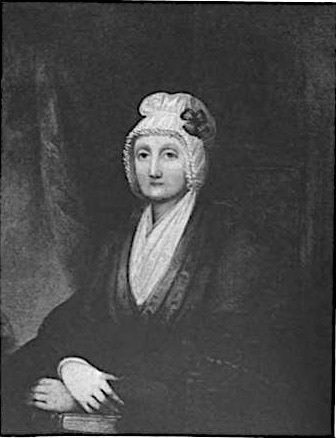 With the land transformed by the British, the tract was inherited after the war by Elliott Sr.’s granddaughter, Ann Elliott Morris, and her husband Colonel Lewis Morris, Jr., who served in the Continental Army as Major General Nathanial Greene’s aide-de-campe, or personal secretary. In the post-Revolutionary period, neighboring property owners laid out a majority of the land surrounding Ann Elliott Morris’ property into formal lots along the new Cannon, Coming, and Radcliffe Streets as part of the neighborhoods “Cannonsborough” and “Radcliffeborough.” Starting in 1812, the Morris family also began to subdivide their large tract to create 49 lots along a new thoroughfare named after the family. Thus Morris Street was created.

After Ann Elliott Morris’ death in 1848, the new lots were officially sold. As early as 1852, nine buildings were recorded as fronting Morris Street, which stretched the two blocks from King Street to Coming Street. While Morris Street appears on maps under its current name as early as 1849, City of Charleston directories do not record Morris Street as a formal thoroughfare until the late 1850s and do not attribute numerical addresses to the street until over a decade later. Early to mid-nineteenth century records suggest Morris Street was, on occasion, alternatively referred to as Mary Street, which is now limited to the section of the street east of King Street. Development of Morris Street began in earnest between 1850 and the start of the Civil War, largely fueled by industrial activity along the South Carolina Rail Road, which ran through the Charleston Neck parallel between King and Meeting Streets. The number of dwellings, businesses, and cultural institutions on nearby streets in the Cannonborough-Elliotborough and Radcliffeborough neighborhoods increased rapidly, and the Charleston Neck was quickly defined by small lots ideal for the homes of working- and middle-class whites as well as free and enslaved Black people. By 1861, for example, eleven dwellings on Morris Street were occupied solely by enslaved people. Far from the neighborhoods and business districts near the port and occupied by the wealthy, Radcliffe, Morris, Cannon, St. Philip, and Coming Streets began to emerge as a cultural and residential epicenter for the city’s poor, marginalized, and enslaved residents. 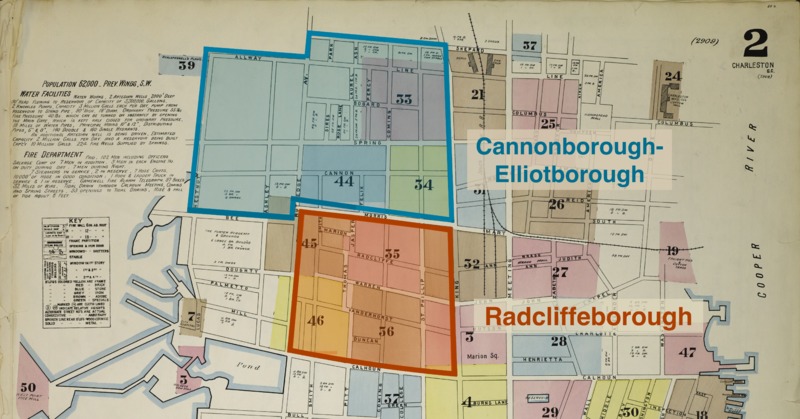 Accordingly, the area was also marked by the oppressive and often violent surveillance of Charleston’s local government and affluent, white community. In 1849, the Charleston Mercury reported the opening of the Charleston Neck Work House for the “solitary confinement, safe keeping, or punishment” of enslaved African Americans. This brutal, penal institution was described as being near the Railroad Depository, which was located just east of the intersection of King and Morris Streets. It is important to consider how the horrific presence and memory of the Work House would have shaped patterns of daily life, as well as culture, and identity within the Black community living on or near Morris Street, not just during the years of its operation, but for generations to come. 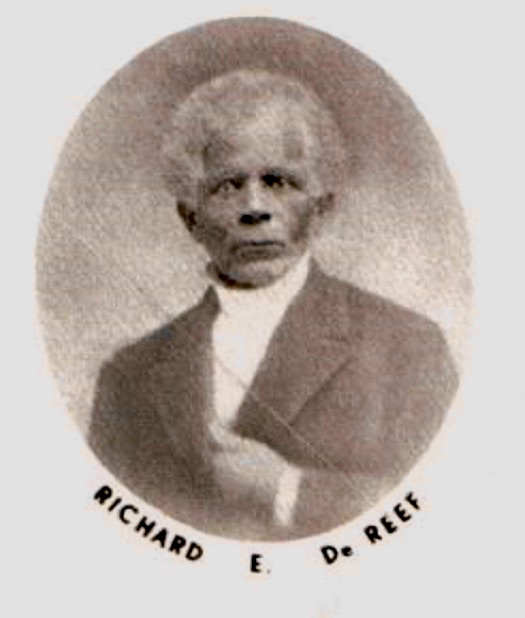 Portrait of Richard DeReef, circa 1870, courtesy of the Avery Research Center for African American History and Culture.

Notable early developers of Morris Street included brothers Richard DeReef and Joseph DeReef. The DeReef brothers were two of 3,441 free people of color in 1850 Charleston, a city with 20,012 white citizens and 19,523 enslaved people. In Charleston, free people of color represented a diverse and sizeable population of non-white people, either freed from slavery or born free, many of whom lived and worked within the peninsula’s urban neighborhoods. Though not enslaved, numerous legal and social limitations barred free people of color from equal treatment and opportunity as citizens. However, a small percentage of this population was able to amass personal wealth, achieving elevated status in a class known locally as the “free brown elite,” to which land-owning, entrepreneurial individuals like the DeReef Brothers belonged.

Prior to their purchase of land along Morris Street, the DeReef brothers established themselves as successful merchants and real estate entrepreneurs. As early as 1843, the brothers owned and operated DeReef’s Wharf, a busy nineteenth-century dock along the Cooper River where they factored lumber. They also maintained seven tenements along the wharf where employed workers and those enslaved by the DeReef brothers resided.

View of the wharves of Charleston near the Battery, circa 1865. Courtesy of the Library of Congress. The DeReef brothers owned a wharf near their Eastside neighborhood.

The DeReef brothers, who resided in Charleston’s Eastside neighborhood near their wharf, bought land on Morris Street immediately after the death of Ann Elliott Morris, purchasing three lowland lots as rental property near what is today the intersection of Morris and Coming Streets. They originally constructed four, two-story dwellings on the lots, but in 1854, all structures were demolished for the extension of Morris Street west of Coming Street. The brothers redeveloped the property along the new extension and established DeReef Court.  DeReef Court was comprised of six wooden dwellings by 1861. Half of the residents were enslaved and half were free people of color. Apart from DeReef Court, the brothers also owned ten other Morris Street dwellings, which also housed both enslaved and free people of color. Through their mercantile business, real estate, and property, the brothers were the city’s second highest taxpayers among Charleston’s free people of color in 1860. That year, the DeReef brothers were recorded as owning 388 enslaved people, some of whom most likely lived in the DeReef’s dwellings on Morris Street. 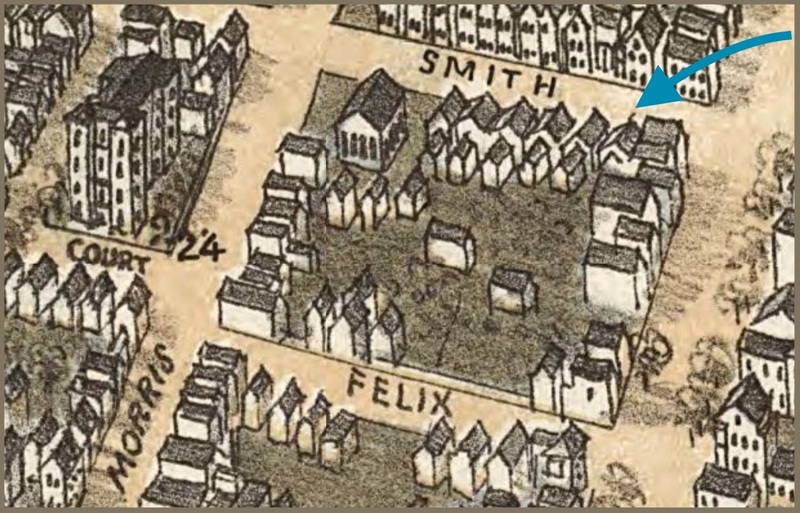 Detail of bird's eye view of the city of Charleston map of the block that included DeReef court, C.N. Drie, 1872, courtesy of Library of Congress. The arrow points to the row of six structures the DeReef brothers developed to create DeReef Court.