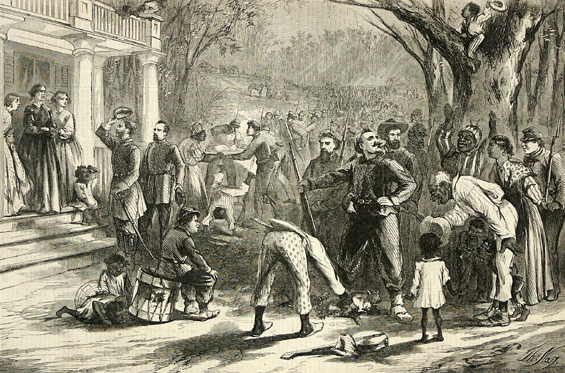 "Arrival of a Federal Column at a Planter's House in Dixie," engraving by Thomas Nast, Harper's Weekly, 1863, courtesy of the Princeton University Library, Graphic Arts Collection.

A Critical Period in the American Past
“The most magnificent drama in the last thousand years of human history,” suggested the renowned African American scholar and activist W. E. B. Du Bois in Black Reconstruction, was the forced removal of over twelve million Africans out of their homelands and into the new plantation societies of the Americas between the sixteenth to the nineteenth centuries. “They descended into Hell,” Du Bois wrote in this groundbreaking 1935 publication, “and in the third century they arose from the dead, in the finest effort to achieve democracy for the working millions which this world had ever seen.” Few chapters in the American experience speak more powerfully to the crucial role of history in shaping the present than the period of Reconstruction in the 1860s and 70s. During this time four million former slaves and their allies began the long struggle of defining freedom for African Americans in the United States. 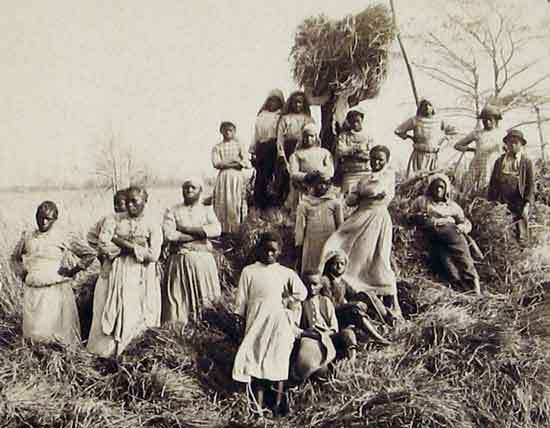 After Slavery is an online exhibition and educational resource that seeks to provide insight into that momentous effort—and its defeat—as former slaves and their adversaries contested the meaning and scope of freedom after the Civil War. Scholarly and popular understandings of slavery and slave emancipation in the United States have changed significantly in the past few decades. Until a generation ago, many professional historians regarded slavery as a tangential aspect of the American past—a minor aberration in an otherwise unique and exceptional story of American freedom. Less than a century ago, prominent historians argued openly that slavery had been an appropriate, even humane means for organizing a society made up of inherently unequal races. Many scholars argued that the Civil War had little to do with slavery, or that the end of slavery in the United States had occurred without any initiative on the part of the slaves themselves. Typical of this line of thought was the assertion by one historian in 1925 that African Americans were “the only people in the history of the world . . . that ever became free without any effort of their own.” 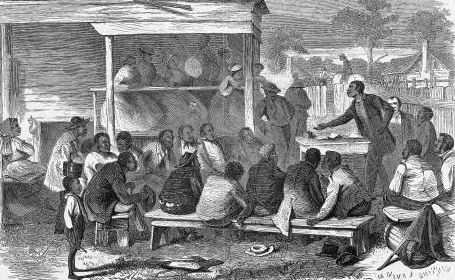 "'Electioneering in the South,' An Orator Addresses Freedpeople at an Outdoor Meeting," sketched by W.L. Sheppard, Harper's Weekly, 1868, courtesy of the Library Company of Philadelphia. 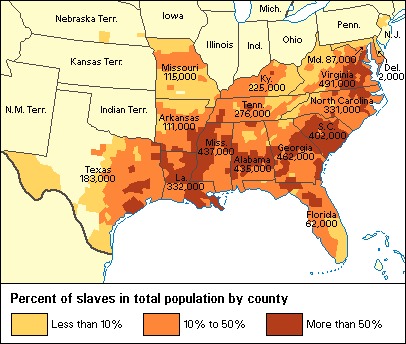 Map Showing the Concentration of Slaves in the South, 1860.

In the late twentieth and early twenty-first centuries, historians have subjected this entire tradition of scholarship to a withering assault, and today it stands completely discredited. While persistent calls to downplay slavery in the nation’s history continue to emanate from influential quarters, the clear consensus among serious historians is that American slavery was far from an aberration, and that some of the most inspiring aspects of U.S. history originated in the long and difficult struggles of slaves and their allies to bring an end to a system that enshrined the rights of slaveholders to hold human beings as property. The After Slavery project is driven by the conviction that confronting the past with updated scholarship, stronger research tools, and a critical understanding of the past is essential to grappling with the legacies of racial and class inequality of slavery in the modern-day United States.

An Important Chapter in the History of Working People →