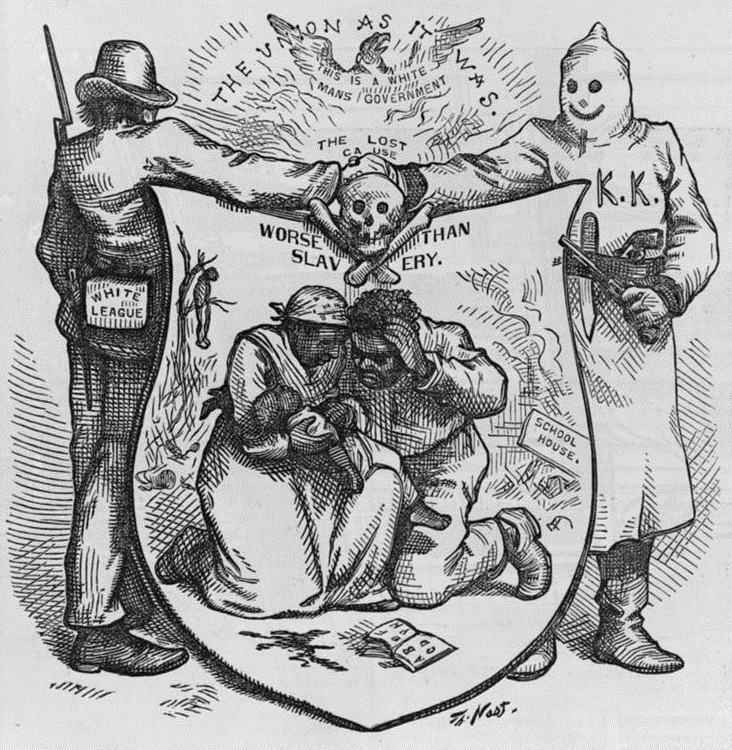 "The Union as it was; The lost cause, worse than slavery," 1874, wood engraving by Thomas Nast, Harper's Weekly, courtesy of Library of Congress. 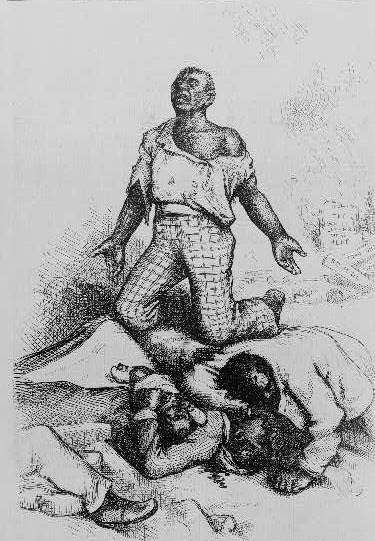 In popular memory, the Confederate surrender in 1865 brought an end to military hostilities, and decided the fate of four million enslaved African Americans in the United States. In reality, the end of formal hostilities left fundamental questions unresolved, and sharp tensions between freedpeople and their adversaries gave rise to new and bitter conflicts over the status of former slaves. Between 1865 and the end of Reconstruction in 1877, paramilitary violence plagued the former slave states, occasionally erupting into large-scale, lethal confrontations. Some of these conflicts were rooted in the indignation of former Confederates over their defeat in the war, but the struggle for power between ex-slaves and their former masters proved to be the primary force driving paramilitary violence during this period. Although important demographic, political, and economic variations shaped the postwar convulsions experienced in particular locales across North and South Carolina, white paramilitaries built a substantial and effective presence in both states. Ultimately, organized violence led by white conservatives played a crucial role in imposing limits on black freedom and, eventually, overthrowing the Republican state governments in which freedpeople had invested so much of their hope for the future.

Neither black nor white Republicans were passive in the face of paramilitary violence. While they remained stationed in the South, black federal troops played an especially important role in galvanizing besieged communities against the paramilitary threat. On a local level, effective defense against the Klan and others depended heavily on the skills and experienced leadership of Union army veterans, teachers and ministers, and Republican Party activists. Freedmen's Bureau officials could also play key roles. Some individual agents risked their lives defending freedpeople, while others seemed unmoved by the violence against ex-slaves. State and federal government officials were sometimes sympathetic to those targeted by paramilitary violence, but on the whole they proved unwilling to commit the resources or adopt the measures necessary to eradicate the threat from well-organized and determined opponents of black freedom. 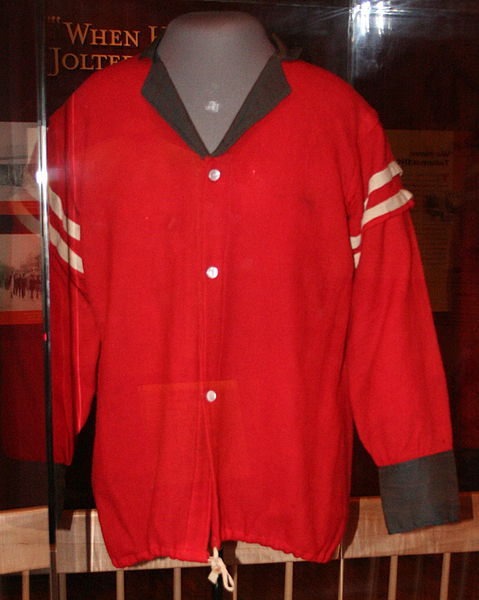 "Red Shirt" worn by militants in political rallies and in African American neighborhoods to intimidate voters during and after Reconstruction, 2011, courtesy of the North Carolina Museum of History.

In the early 1870s, the federal government finally acted to suppress the Klan through the Enforcement Acts. In response, southern conservatives turned to a more open form of military organization directly linked to the Democratic Party. Through organizations such as the White League and the Red Shirts, conservatives combined closely choreographed spectacle and public intimidation with the more familiar targeting of individual activists. By late 1876, these groups assisted in effectively overthrowing Reconstruction and Republican governments in both North and South Carolina. Americans sometimes assume that the United States is immune to the kind of sustained domestic turmoil that ensued during the period of Reconstruction, but the experience of the Carolinas and of the South generally in the years following emancipation suggests that, on the contrary, paramilitary violence played an extremely important role at a critical juncture in our nation’s history.