Unit Seven: Gender and the Politics of Freedom 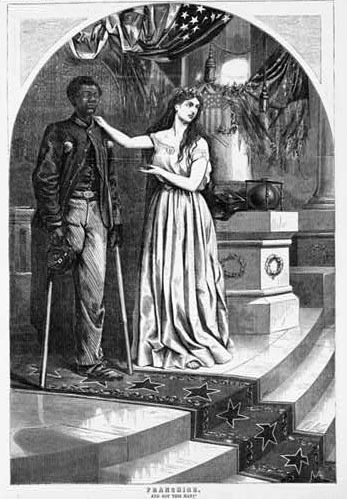 “Franchise. And not this man?,” 1865, wood engraving by Thomas Nash, Harper's Weekly, courtesy of the Library of Congress Prints and Photographs Division.

The Civil War unleashed a revolution that left few areas of national life untouched. Liberation transformed what had been the largest portion of the nation’s antebellum labor force—slaves—into wage workers, and planters entered into contractual relations with individuals they had formerly owned. However grudgingly, planters had to pay African Americans for labor services they had customarily taken by force. Individual citizens across the country also found themselves in new relationships with the state. In the post-war period, the federal government inserted itself in new ways into areas that had once been the purview of individual states: assessing taxes, conscripting soldiers, and later, offering aid to veteran soldiers and to hundreds of thousands of black and white southerners who had been displaced and impoverished by war. In this context, political parties realigned and the Republicans, who in the 1850s had been mostly confined to the northern states, swept into and across the former Confederacy, transforming the political landscape.

The revolution did not stop here. The Civil War and emancipation dramatically upended existing gender relations. Women and men entered new roles that forced black and white Americans, rich and poor, propertied and not, to reconsider what it meant to be a "good woman” and a "good man." In the Confederacy, for example, the departure of white men to the front lines pushed white women into areas of responsibility formerly reserved for men: tending crops, overseeing enslaved field hands, offering up Sabbath-day sermons, and engaging in public and paid labor. Some white southern women enjoyed the opportunities opened by war. Others were horrified, wishing for nothing more than a return to antebellum conditions. Elite white women were especially troubled by the desertion of their enslaved laborers, who embraced emancipation by laying down their tools, dropping their dish rags, and abandoning their wash tubs. These women suddenly had to perform chores they still considered the work of slaves. 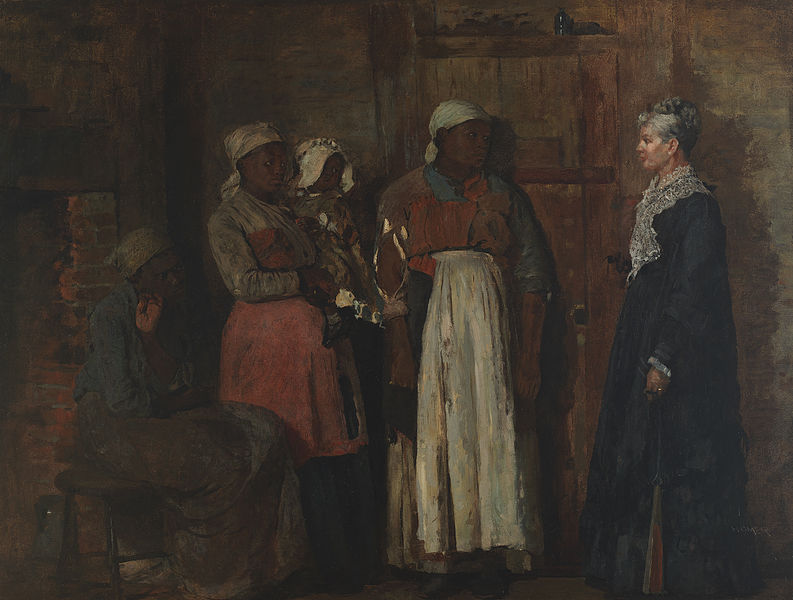 "A Visit from the Old Mistress," painting by Winslow Homer, 1876, courtesy of the Smithsonian American Art Museum. 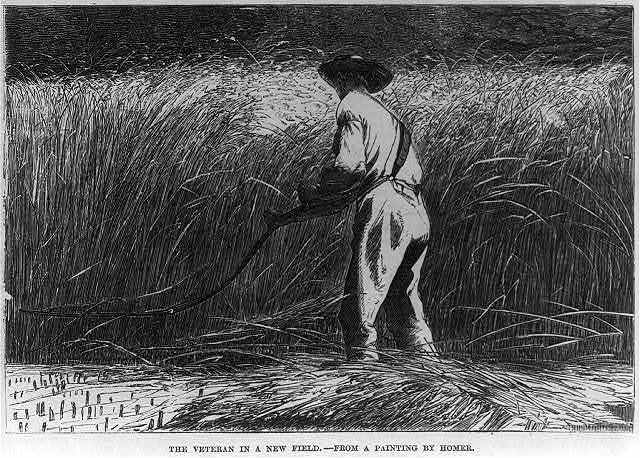 "The Veteran in a new field - from a painting by Homer," 1867, Frank Leslie's illustrated newspaper, courtesy of Library of Congress Prints and Photographs Division.

War and emancipation transformed the gendered lives and ideals of African Americans too. Enlistment in Lincoln’s armies, for instance, fundamentally changed the ways black southern men thought about themselves in relation to their wives, their children, their states, and the nation. Introduced to northern gender sensibilities as they marched and fought alongside Union soldiers, black southerners who served often returned home with new understandings of what it meant to be men. As recent scholarship reveals, the enlistment of black men also changed how black women thought about themselves and about their social, civil, and political rights. Many, for example, believed that the sacrifice of a son or husband on a faraway battlefield bought them the right to intervene directly in political matters. For the enslaved left behind on Confederate plantations, the departure of men forced them to reconfigure themselves into new domestic units, drawing together the female, the infirm, and the young in “families” of people who may or may not have been actual kin. 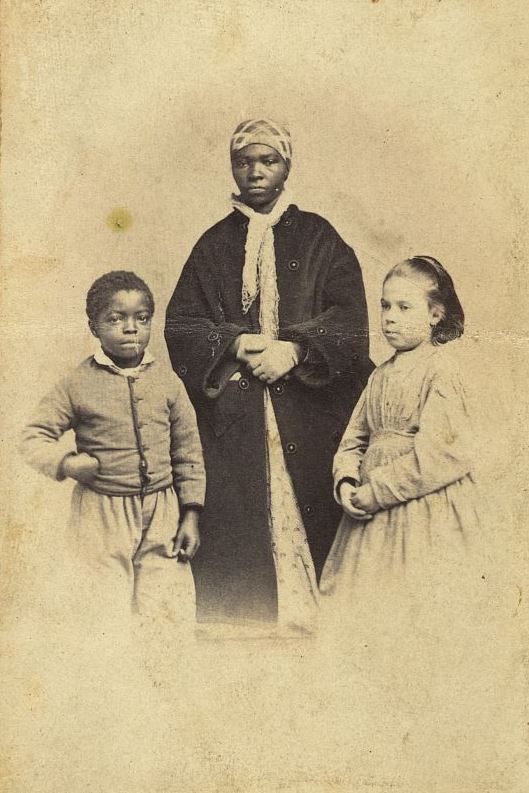 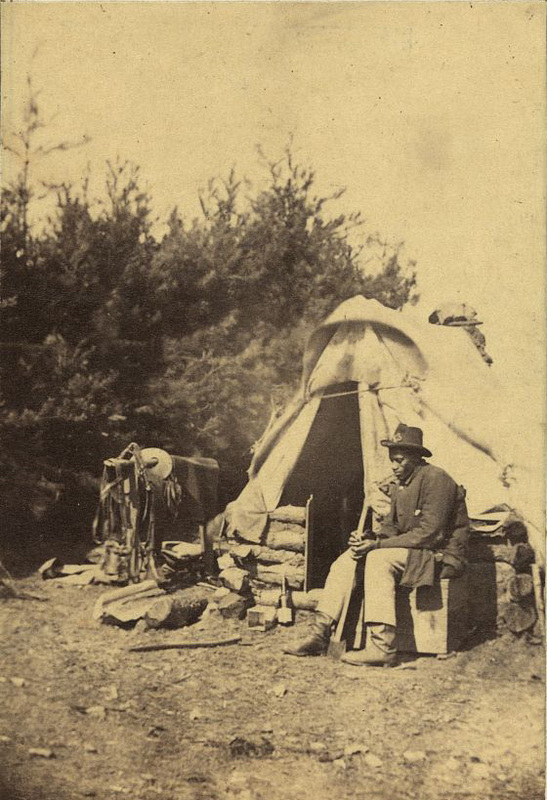 Gendered ideas, expectations, and experiences continued to evolve beyond the end of the war. The advent of wage labor proved especially treacherous for black women. Once prized by slaveholders for the babies they could bear, freedwomen found themselves shunted swiftly to the side, roughly dismissed by planters who could not afford, and with emancipation no longer needed, women who could bear children. As one Union official observed from his post in Alabama, such women along with any young children were soon "everywhere regarded and treated as an incubus." Yet the same devaluation of black women as agricultural wage laborers thrust black men into new roles. In seeking to survive a freedom that had turned unexpectedly difficult, freedwomen turned to those they knew best for assistance calling on their husbands, sons and brothers to represent their interests in a capricious and gendered labor market. Along with this came a new domestic dependence.

As gendered ideals and assumptions evolved through the deeply contingent circumstances of emancipation and free labor, they were profoundly shaped by and deployed in political debate. Frequently considered one of the most natural of divisions, changing gender definitions became a commonplace weapon as freedpeople and their white adversaries jockeyed for power. For example: military service, and the assumptions about manhood it gave rise to, provided black men with a compelling argument for the exercise of full citizenship rights. In their minds, and in the minds of many nineteenth-century Americans, they had earned that right on the battlefield.

At the same time, white conservatives made anxious by the rising power of black men at the bargaining table, at the voting booth, and eventually in elected office regularly attempted to paint their opponents as female, a rhetorical strategy meant to call into question freedmen's capacity for independent political action. Women, such proponents would argue, were naturally dependent and for that reason “naturally unfit for civic and political duty or involvement in public affairs." Whites were therefore outraged by the temerity of freedwomen who challenged their former owners over wages and conditions, or even more audaciously moved beyond the plantation household to involve themselves in grassroots political mobilization. Similarly, the new assertiveness evident among black men determined to claim their rights during Reconstruction became the basis for malicious caricature about the alleged threat they posed to white women and of an enduring rationalization for lynching and other horrific forms of racial violence.

Thus gender and the countless discussions about what it ought to mean, for whom, and why, shaped nearly every aspect of social, civic, and productive life in the post-Civil War nation. The Unit Seven: Educational Documents provide insight into the gendered experience of emancipation and of gender conventions in dramatic flux, as both a product and a producer of new power relations during Reconstruction. 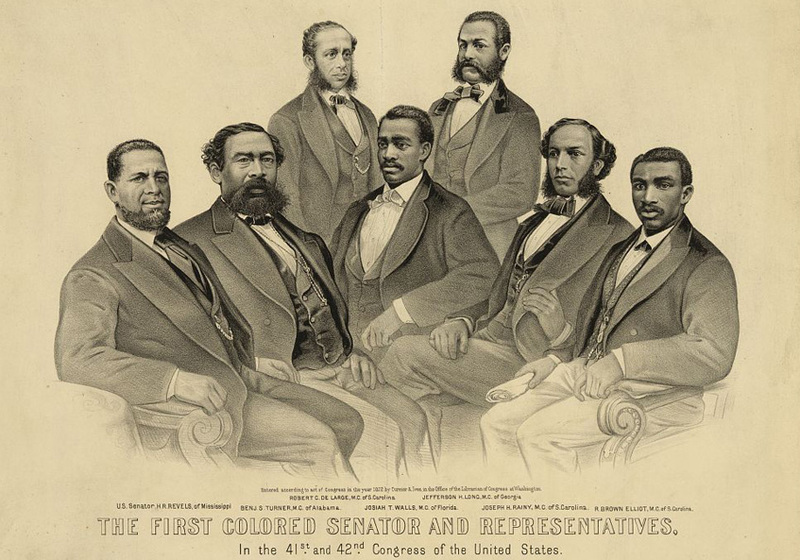 "The first colored senator and representatives - in the 41st and 42nd Congress of the United States," New York, 1872, Currier & Ives, courtesy of Library of Congress Prints and Photographs Division.