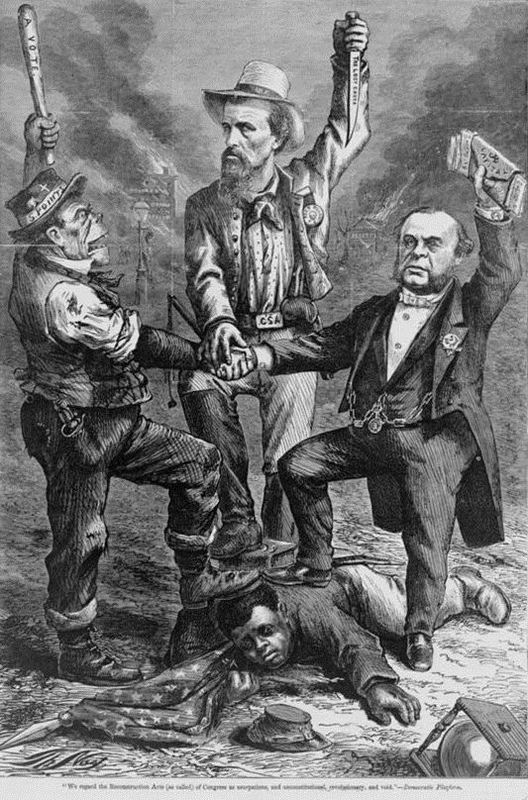 "This is a white man's government," Democratic platform regarding the Reconstruction Acts, 1868, print by Thomas Nast, Harper's Weekly, courtesy of Library of Congress Prints and Photographs Division.

In the early fall of 1865, an outraged former slaveowner named J. C. Warley complained to a Freedman’s Bureau agent at Pineville, fifty miles north of Charleston, South Carolina, that “everything had gone to the devil” since emancipation, and warned him that “the war is not over.” Warley articulated in an unusually frank manner the sentiments of many southern planters after the war. Despite the capitulation of Confederate armies in the spring of that year, the collapse of the Confederate government, the garrisoning of the South with Union troops over the summer months, and the final destruction of slavery with the Thirteenth Amendment in December, many southern conservatives still could not reconcile themselves to the new order. Accustomed to a world where they maintained power over black workers through violence, many southern whites lashed out at blacks in the first years after emancipation, often with tragic and lethal consequences.

Some former Confederates, like Wade Hampton, struggled to admit defeat on the battlefield, hoping perhaps that this might help postpone the consequences of their loss and enable them to hold on to a lost world a little longer. Others counseled minimal cooperation with federal authorities, even during the relatively easy period of Presidential Reconstruction. A few southern conservatives responded to emancipation more constructively, looking toward new economic initiatives and making tentative, if often paternalistic, gestures towards freedpeople. In general, however, early Reconstruction was a period of disorientation, disgust, and despair for most propertied southern whites 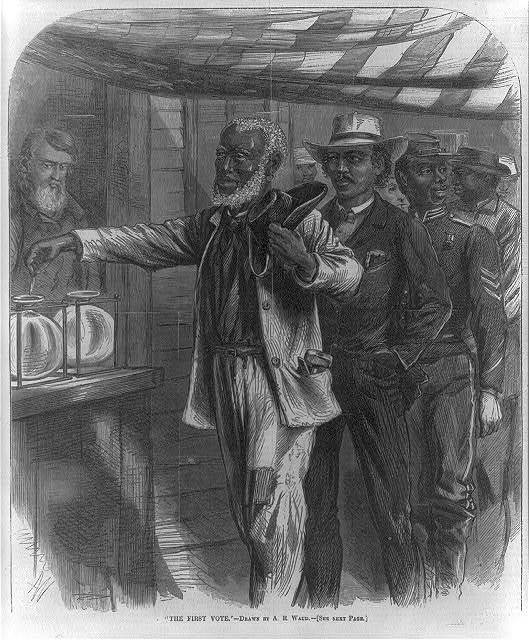 Their unwillingness to accept defeat and cooperate with federal authorities ultimately backfired against white southerners and contributed to the deep polarization that galvanized northern support for passage of the Reconstruction Acts in March 1867. These served as the foundation for federal attempts to reconstruct the South, dictating the terms for readmitting Confederate states back into the Union and requiring southern states to allow black men to vote. If former Confederates had been reluctant to accept the implications of the end of slavery after the war, they were even more appalled by the prospect of their former slaves having political rights while they themselves were disfranchised. One solution was to make use of a loophole in the new law: if a majority of the registered voters did not vote in favor of a constitutional convention, it would not be held. Despite the fact that African American men were now eligible to register to vote, conservative whites believed they could convince enough voters, black and white, to stay away from the polls to insure the defeat of the conventions.

These early endeavors in voter suppression ultimately failed in every state where the attempt was made. As the constitutional conventions assembled in January 1868, southern conservatives (organized in the Democratic Party) gained national attention by railing against what they considered to be the unconstitutional actions of Republicans in Congress. These tensions set the stage for an interpretation of Reconstruction that would gain traction among white southerners in the early 1870s. By the middle of that decade, southern conservatives’ nostalgic attachment to the Lost Cause juxtaposed against embellished accounts of Republican corruption came to dominate an emerging national narrative that would shape history scholarship, textbooks, and popular memory for decades to come. Some conservatives, such as Plato Durham in North Carolina, demonstrated their opposition to Reconstruction after the 1868 constitutional conventions by joining the Ku Klux Klan. Significantly, however, some white conservatives began to distance themselves from unrestrained vigilante violence, viewing paramilitary terror as a threat to commercial stability and labor peace. 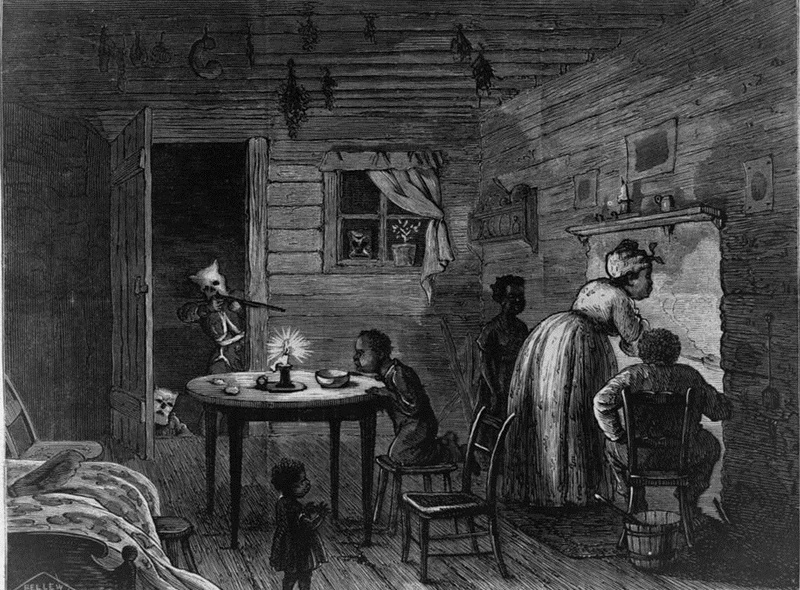 "Visit of the Ku-Klux," 1872, wood engraving by Frank Bellew, Harper's Weekly, courtesy of Library of Congress.