From the late-eighteenth century to the Civil War, the number of surviving historical documents that mentioned enslaved peoples increased. The antebellum period offers more information by way of surviving plats, newspapers, plantation business journals, and census records. Plats are particularly informative in locating nineteenth-century slave settlements. By the 1790s, some of the land that was St. Paul’s Parish glebe was sold to the Fickling family. The earliest plat of Stono Preserve with evidence of enslaved peoples dates to 1799 and illustrates two structures labeled “Settlement” just north of the foot of the avenue of oaks and near the plantation house. Another plat, dated ca. 1807, shows the same location, but with two additional structures and a defined yard. This addition of buildings suggests there was also an increase in the number of enslaved peoples. This is supported by census records. 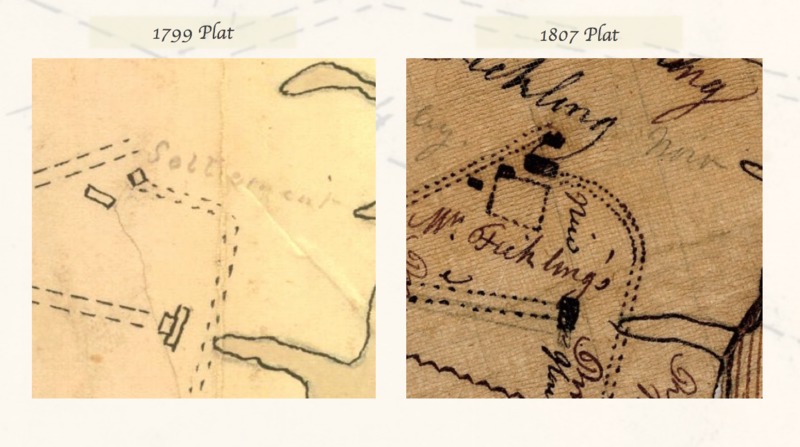 (Left) Detail of 1799 Plat, courtesy of McCrady Plat Collection, Charleston County RMS. (Right) Detail of plat of Stono River land, 1807, courtesy of South Carolina Historical Society. The increase of settlement buildings from 1799 to 1807 suggests an increase in the slave population. 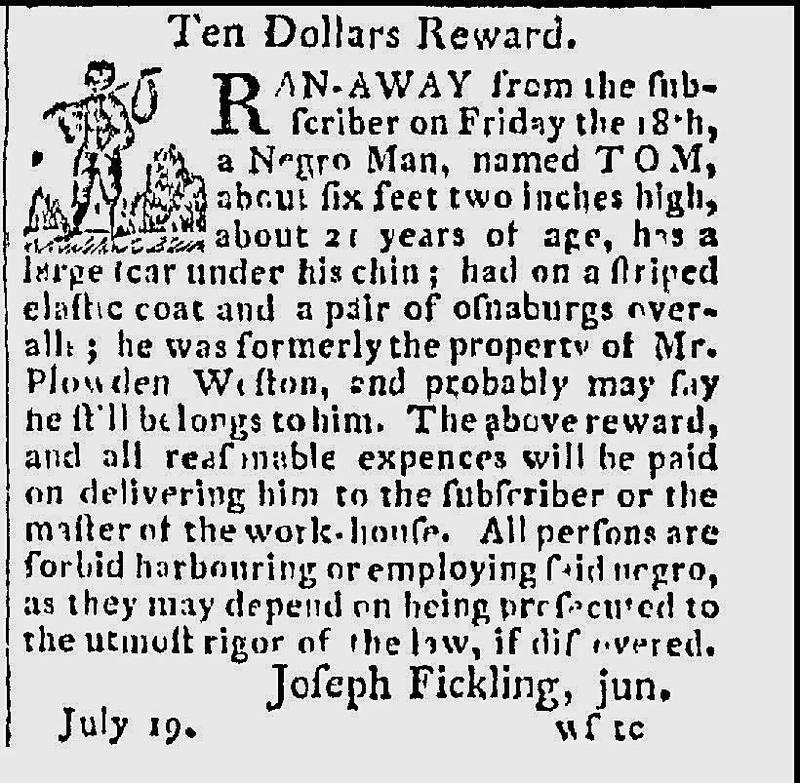 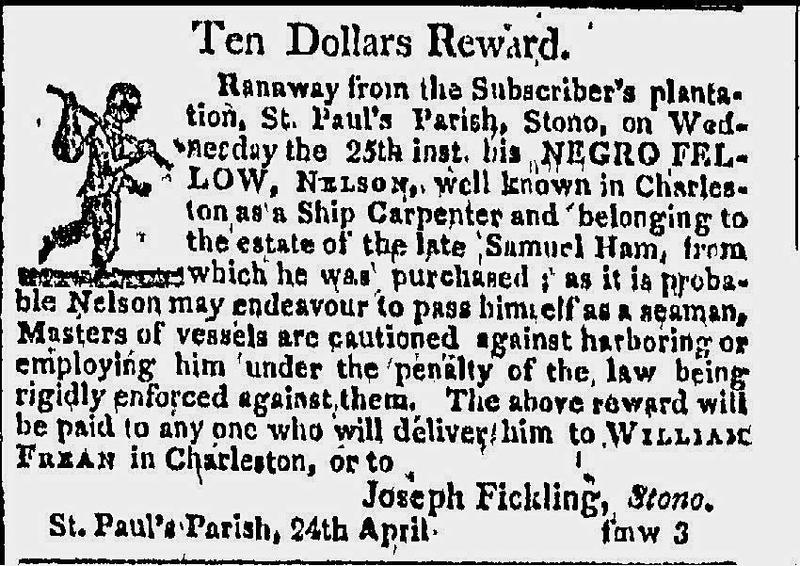 Runaway advertisement for Nelson, a well-known ship carpenter and enslaved person on Fickling plantation, City Gazette and Daily Advertiser, May 4, 1810. 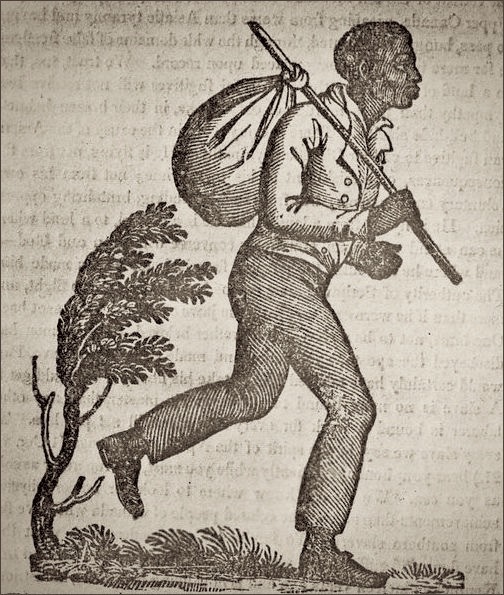 While plats illustrate where enslaved peoples lived, census data and newspapers provide information about some of the individual people enslaved on the Fickling’s property. Three runaway slave ads tell the names of four runaways from the Fickling plantation. A 1794 runaway advertisement, signed by Joseph Fickling, states that Tom ran away and can be identified by a scar on his chin. Samuel Fickling, the property’s proprietor, reported owning ten slaves in the 1800 Census. Two of them, Polidore and Hampton, appear in the June 1800 South Carolina State Gazette as having “absented themselves” from the Fickling plantation.  All that is known of Polidore and Hampton is from the runaway slave ad that states their names, heights, what they were wearing, that Polidore was “pitted with small pox,” and that they were “well known” in Charleston. It is not clear why they were well known. By the 1810 Census, Joseph Fickling, who had inherited the plantation after Samuel’s death, reported owning fifteen enslaved people. One of them—Nelson—is known by name because he escaped from the Fickling plantation in 1810 and a runaway slave ad was written in response. In the newspaper advertisement, presumably written by Fickling, described Nelson as “well known in Charleston as a Ship Carpenter.” Tom, Nelson, Polidore, and Hampton’s fates are not known, but their resistance to enslavement placed their names into the historical record.

The population of enslaved peoples on the property continued to increase until the Civil War. In the 1830 census, Edward Lynah, a planter who owned several properties, one of which was the plantation previously owned by the Fickling family, reported that he owned fifty enslaved people. However, it is unclear how many of those fifty lived and worked at the plantation on the Stono River. Benjamin Bailey, the property owner in 1860, owned thirty-five enslaved people—thirteen adult males, thirteen adult females, and nine children. At that time, any enslaved person over the age of ten was defined as an “adult.” Bailey also reported that he had nine slave houses on the property, an increase from the number shown on the circa 1807 plat.

While the 1799 and circa 1807 plats provide evidence of where the enslaved peoples lived, and census records provide numbers, these do not reveal how they lived. The archaeological record assists in understanding how enslaved peoples lived on the property. In 2012, archaeological testing began at the site of the “Settlement”. The interpretations of the material culture from this work helped piece together the daily activities of the property’s late-eighteenth and nineteenth century enslaved population. 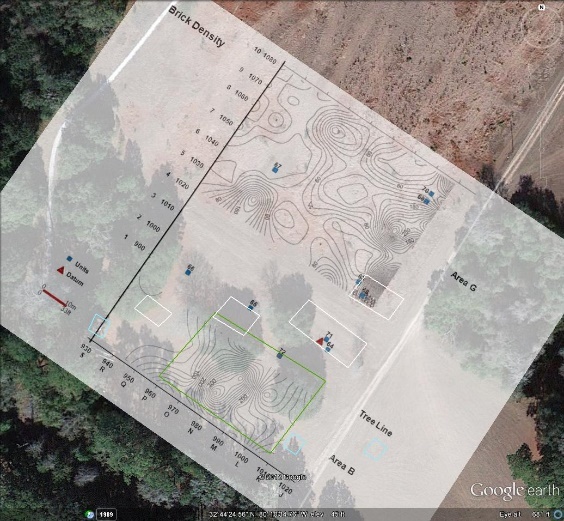 Artifact density map using brick concentrations to locate one of the four houses (outlined in white) in the "Settlement," created by Maureen Hays, 2014. 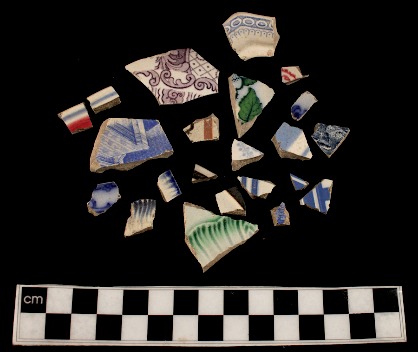 Archaeological testing included surface collection, shovel-testing, and excavation of units, which resulted in the recovery of nearly 14,000 artifacts dating from prehistoric times through the twentieth century. Approximately one-quarter of the artifacts date prior to 1800, suggesting that the site was occupied during the eighteenth-century. However, it is not yet clear how the space functioned. The most intensive use of the settlement occurred from the late eighteenth through the mid-nineteenth century with nearly two-thirds of artifacts dating to that period. Artifacts dating to the decades immediately after the Civil War decreased and post-1880 artifacts were even scarcer. The artifacts suggest a significant decline in the population of the “Settlement” after the Civil War when newly freed people often relocated.

While the ca. 1807 plat illustrates four structures, it does not identify their functions. As most recovered artifacts are related to household activities—particularly the preparation, cooking, and serving of food—these structures were likely residential in nature. No intact structural evidence has been identified, likely due to plowing during much of the past century. However, the location of the structures from the plat can be identified based on artifact density. Brick fragments and ceramics are two artifact classes that archaeologists associate with residential structures. By using the count and distribution of brick fragments and ceramics, the Stono Preserve archaeology team mapped three distinct areas of high artifact density. By overlying these density maps and the ca. 1807 plat with modern-day satellite imagery, these three areas match the location of three of the four structures. The plantation owner in 1860, Benjamin Bailey, reported to the census that year that his property had nine slave houses.  Only surface artifacts have been used to identify the possible location of these additional five structures.  Current archaeology indicates they may have been located immediately to the north of the original settlement along a dirt road.

During the Civil War enslaved peoples witnessed plantation operations slow or halt. In the Lowcountry, some enslaved peoples were forced to move away from their plantation. The move was a strategy of slaveholders to keep slaves from running to nearby Union-controlled areas where they became free. Others slaveholders kept enslaved peoples on their plantation throughout the war. This means the “Settlement” could have been either abandoned or operated normally from 1861-1865. After emancipation, however, when newly freed people could leave the place they were enslaved, many did so. Others remained on or nearby where they lived during enslavement. The archaeology of the “Settlement” suggests that those on the Stono Preserve’s land left either immediately or in the decades following the Civil War. It is the landscape, then, that continues to serve as evidence of the lives they carried out and the agricultural labor they endured.

← Colonial Period
The Landscape of Agriculture →